Another noob question… I’m struggling to silence some stabs.

It’s stock stabs in a Ducky One 2 TKL. I don’t remember them being this rattly before my mods (but it had MX blues that might have just concealed it).

For anything involving the wire, I first used Permatex 81150, then SuperLube Multi-Purpose Synthetic Grease DE21014, after noticing that the latter seems to be slightly thicker. For the insert walls I used Krytox 205g0.

All of the above haven’t removed the rattle in the mentioned keys. Ironically I didn’t have this much trouble with space bars and had success silencing 3 of those with the usual lubing measures. Incl straightening one ABS bar with hot water.

I’ve noticed that the combination of “filling the insert’s wire compartment with lube” and “lubing the wire generously” will allow the first few key presses to be silent. But pretty soon after that the lube seems to be wiggled out of contact area (my guess) and the rattle returns.

Looking closely at the cap wobble (video), I wonder if that is more than lube can compensate. Maybe there’s other contributing factors I’m overlooking? Like switch stem wobble that allows the see-saw in the first place? But all the switches I’ve tried have the same result (Red ink, Speed Silver, Cream, Gat Yellow KS-9, Holy Panda).

I’m at my wit’s end (which isn’t saying much though). What else can I try?

I’m no expert in this, but looking at the clip it looks like the cap ain’t all the way pushed down on the 3 steams .

Not sure what you mean by 3+. The cap is pressed down all the way. I tried it again just now. Comparing to the neighbouring keys, it’s not higher, either.

I might be the stab stems or cap itself banging off the the extra plastic bits that stick out on the top of the stab. 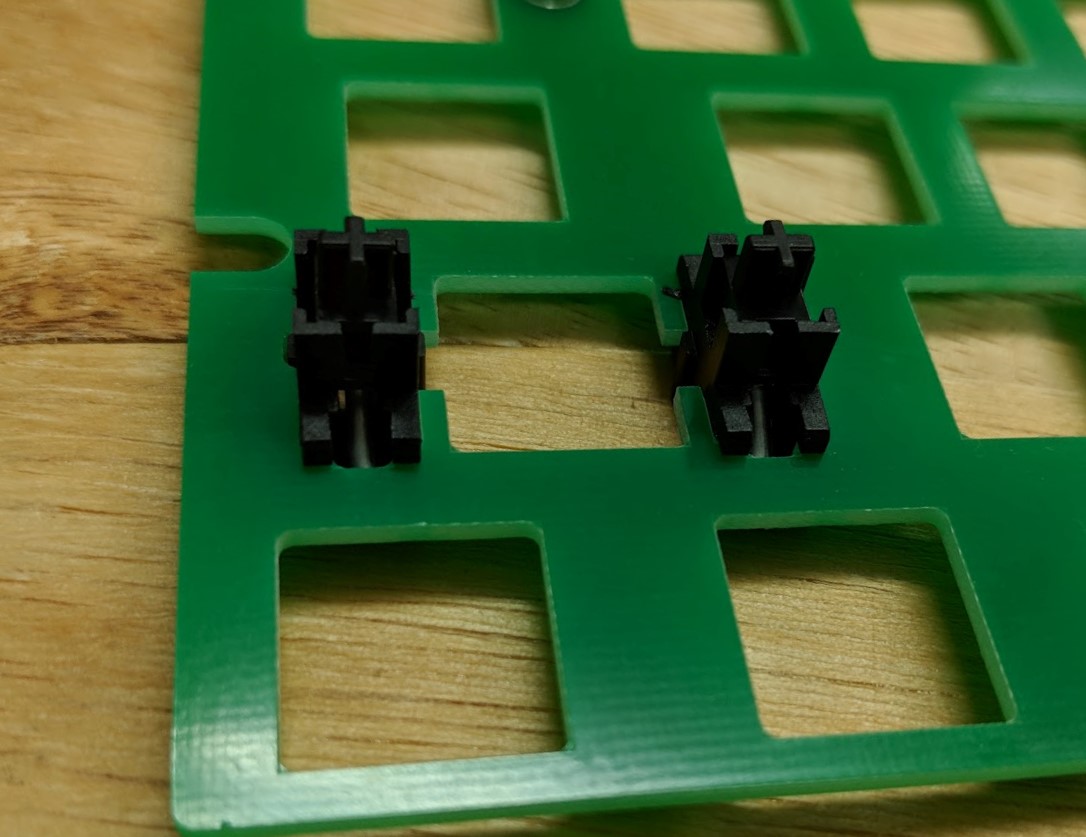 Anything that moves will make noise when it hits other parts. In a stab, movable parts are:

With stab wire, most of the noise comes from the wire hitting the sides of the stem. While you can wrap the wire ends, that interferes with movement so applying a thick glob helps. Be sure to inject fresh lube when it starts to rattle again.

With stab stem, it’s just slapping against the housing so smearing inner sides of stab housing with a layer of 205g0 will dampen the generated noise. Again, reapply as needed. Noise also comes from stem hitting the PCB. You can add band-aid landing pad but that makes it feel squish. I normally just stop at clipping.

With stab housing, any kind of gap in how it’s fasten to the plate or PCB will generate noise. This is why screw-in stabs are favored over clip-in or plate-mount stabs. Same solutions for your spacebar issue also works here. Anything that can reduce the gap will help: band-aid, paper, tape, rubber, nail polish, whatever. Remember that gaps exists around, below and above the area stab housing touches. It doesn’t matter if you can’t completely fill the gap. Reduced space to move means reduction in movement which means reduced noise. Anything is better than doing nothing.

UPDATE: I’ve written my reply as a general famework for diagnosing stab noise. There is, however, one overlooked area which is unevenness. Without getting into how it happens (twisted wire, switch height, and switch stem dimensions, etc.), the symptom is keycap tipping to the side as it’s pressed. You may need other measures as well but, whatever you do, you’ll have to even out the height. What I use is switch rings, typically used to address North-facing switches rubbing against keycap. Even it out so there is no room to tip over then go from there.

Everything mentioned above is pretty much gospel. I stumbled across this post by @Walkerstop on teeter-totter stabilized keys that worked for me. I ended using an o-ring on each stab insert which prevented any unintended key wobble. Hope this helps.

Everything mentioned above is pretty much gospel. I stumbled across this post by @Walkerstop on teeter-totter stabilized keys that worked for me. I ended using an o-ring on each stab insert which prevented any unintended key wobble. Hope this helps.

Ha! And I thought I came up with that… I have found that it helps in a lot of situations, though - I’m using those same washers for north-facing switches on many of my stabs now.

They really help for those situations where the stab bottom-out is lower than that of the switch; which is even more of a concern for clipped stabs. Once I started using those washers, my band-aid modded stabs started sounding and feeling a lot better.

Thanks all for your ideas.

Padding the stab stem so it’s sorta “pre-pressed” and eliminate the wiggle room was a great suggestion. Previously I tried filling the + in the keycaps hole with paper towel fragments, but it worked as well as the idea sounds

Seeing it done properly on the stem helped. Inconveniently, I don’t have those washer rings and am too impatient, so I tried it with some thin foam cut to fit.

Padding both stems didn’t seem to help that much, but then I had the glorious idea of trying two layers on one side, to force the caps in one of the extreme end of the seesaw, accommodating the angle that my finger tends to press.

And it sorta works! In synthetic tests there still some minimal wiggle, depending on where I touch. But in real typing it is reduced enough, especially on the Shift that is supposed to be quiet (linear). Since the Enter and Backspace use Box Whites, the remaining minor rattle seems to be more than acceptable. (Famous last words).

https://streamable.com/8b6rkk (why is this not automatically embedded like in the initial post, and how can I fix it?)

Cotton balls (on the end of stab wires inside of the stab housing) dampens upstroke. Preference but I like to. And for the more lucrative thinking of you, Nyogel 767A. This is just a way to be fancy

Can use common dielectric grease, 205g0. After these two what I always use tho is cotton balls but like I said preference

Might as well say too that Rama recommends further modifications and they have tutorials on YouTube. Happy clacking

Ended up needing the cotton balls (shreds, rather). It was a bit tricky to get the right amount staying in the right spot when inserting the wire, but so far it has a good result. Feels better than my crappy stem paddings, too. Hopefully this is the enduring solution for my troublesome stabs…