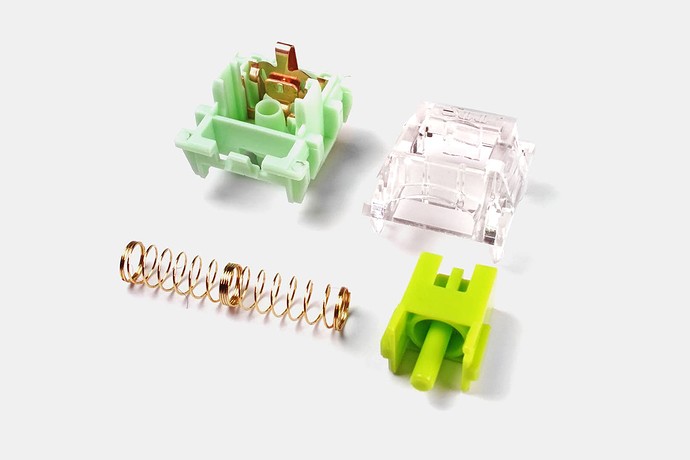 From what I can tell, what we’re looking at here is a Gold Pink with a more heavily pre-loaded spring. My only real complaint with the GP’s was how super light they were, so these look pretty appealing to me. Seems like multi-stage springs might be starting to catch on here in the Western market…

As of writing, only 4 more folks need to join in to hit MOQ - anybody else into these limey-looking smooth bois?

These look similar as well. Yep - as far as I can tell those are the same aside from the color and spring weight. Those (lime) green ones are supposed to be closer to the 60-ish range.

On the Drop site, it mentions ‘ACE’ as one of the specs…what does that mean?

80 cents per switch is quite deep

Based on the description, ACE appears to be the company that commissioned TTC to make their switches in this color.

Well if that’s the case, they missed out on making them Ace pride flag colours!

Do these new TTC switches have the same ungodly harsh bottom-out that the Gold V2s did?

The most intriguing thing about these switches is that spring. They’re supposedly like 22mm long, and have a slow curve that snaps on return once you release. You can order them on their own on taobao right now, but they just seem so interesting for linears and change them dramatically; I wonder how they would perform on tactiles.

Also it’s so odd how merely 3 months ago TTC switches were like .25c each and now they’re climbing to JWK levels, must be super popular in China and NA is finally getting a bite of it.

Have you heard of the Bluish Whites? They are tactile and have a very similar looking spring if not the same one, and they also have a little silicone in the bottom of the middle tube to dampen bottom-out. They need a dab of lube on the top housing to make the top-out less harsh sounding, but they are very satisfying to use. I’d been kind of disappointed in TTC’s before those, but they managed to make an impression.

I guess it might be kind of like Gateron - they make cheap switches and expensive ones, too.

Yeah I’ve seen those around, 1up actually stocked them recently and I was thinking of grabbing a bunch to try out. Dunno how big of a fan I would be of the “HP-like” tactility people are claiming it is, but it’s always worth trying. What TTC did you use before? From what I understand at around the start of Pink Gold is then their game really stepped up, but even that feels just like yesterday lmao. I would expect a lot more recolors and playing around with housing materials like we’ve been seeing with JWK to come out of TTC soon enough if they’re tracking upward in popularity like I think they are.

They do have a pretty strong bump, but the experience is super different from Holy Pandas because of that dampened bottom-out - it really does a lot for the otherwise harsh feel.

I’d tried a Gold Brown on a tester and really liked the sound of the single switch, but when my set finally came in I was pretty underwhelmed; pretty much just browns with a slight rattle. The Bluish Whites I actually like, though.

The Gold Pinks felt super smooth to me, but as @Lesbian mentioned their bottom out is pretty harsh in its own right; seems like their stem is made from a harder blend and has an almost “clinking” sound against the housing. I wouldn’t mind more of their switches coming with the dampened lower that the BW’s have.

I think you’re right about more TTC variants and recolors being on the horizon, especially now that they have at least a couple recognizably good switches in the market here.

The dampened bottom outs are so intriguing. TTC has been doing some really out there stuff and I really appreciate it.

I just recently learned the mechanics of how their Silent Reds were, how the stem only has dampening for the top and the bottom housings takes care of the bottom dampening like the Bluish White, so using that stem in other housings that have mediocre top materials would help with sound a lot. I hope they restock those soon, would be fun to mess around with.

Then you have the Gold Blues which are a dampened clickies only on the downstroke, which I haven’t personally seen in MX, only alps. I might just grab a few of each on my next Taobao haul, there’s just so much fun going on with then I would hate to miss out on.

TTC Bluish Whites have been a pleasant surprise. I hate a slow return and the springs in these are wonderfully snappy. The sound is pretty good stock but they can be a bit loud.

I am glad to see more competition.

I meant to say Bluish White tactiles vs the Gold Pink light linears - I haven’t tried the clicky Gold Blues yet.

Question, does the new ttc gold pink / redv3 feel better than the gaterons? (for games)

It’s pretty subjective - Gold Pinks will be smoother and lighter than Gateron Yellows out of the box, but they also have a higher-pitched, harder, glassy bottom-out.

@Deadeye @pixelpusher
I don’t remember Drop’s pricing, but KeebsForAll has them in stock now at 56 cents a piece. I picked some up to compare them to the Wild’s and Matrix’s. Buttery Smooth TTC Ace Linear switches with a wonderful typing feel, a nice bassy sound signature on a budget. Buttery smooth and very consistent, we like these switches a lot for their nice, simple colorway and good features for the price.

I bought some from Dorp already, but thanks for the heads up. I like them. It is interesting how many good switches are on the market now. Like it was stated before, the TTC Ace isn’t a “WOW” switch, but it does everything very well.