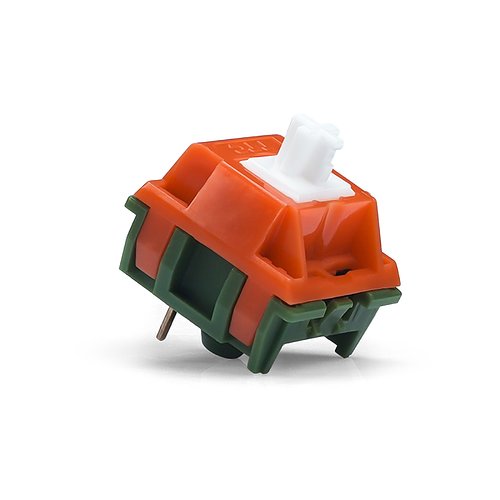 Keyfirst branded - the same folks behind the Gateron Cream switches, this time having TTC do the production.

They don’t seem particularly interesting or exciting, but they certainly do have an unusual colorway. From the short description, these sound like mild, traditional mx-compatible tactiles that come factory lubed. I’m not sure if “large tactile ahead” means a strong bump, a long bump, or something else - gotta love marketing filtered through the language barrier.

I was a little underwhelmed by TTC’s browns, but that’s more my fault for expecting mole out of milk-chocolate - and for that, they’re fine. These don’t sound like they’d too different to me from the description, but the non polycarb(?) top housing might improve the already decent sound a bit, at the sacrifice of SMD friendliness.

certainly a unique colorway if nothing else, only so many ways to curve a tactile bump /s

“large tactile ahead” (I assume means tactile event is at the top of travel) followed by “Feels like Cherry MX Browns”.

Has anybody tried these? 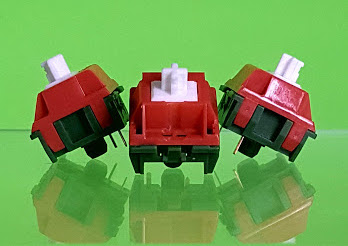 They have mild slight sharp tactility that is somewhere between MX Brown and MX Clear. Smooth travel, with oil lubing on tactile legs and stem pole. A bit of wobble. Sound is slightly muted.

Here’s a comparison to other switches marketed as MX Clear clones. 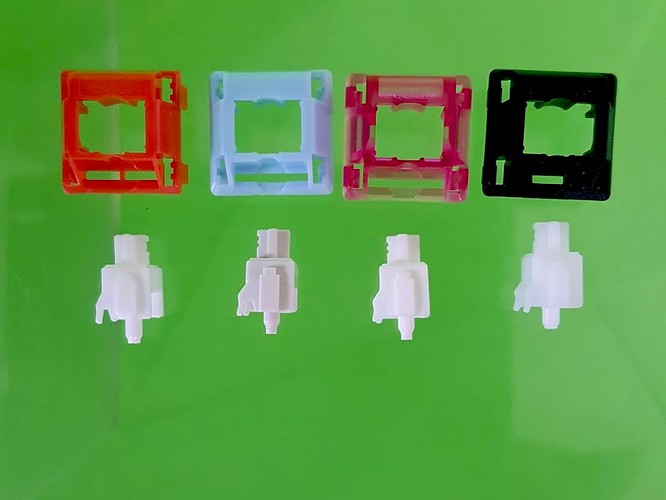 That stem bump reminds me of Aliaz switches. Or browns I guess. Funny, because if I remember right, Aliaz was less tactile than Browns. Maybe these watermelons

have a leaf that increases the feel.

Thanks so much for providing this info.

I have 4 samples on the way. Took a gamble, especially since AliExpress called them “clicky” switches, but now I really want to try them.

Looks like they may have succeeded where Dragonfruits failed.

@djmantis funny, I was just thinking of Taliaz yesterday [Aliaz in T1 housings.] Aliaz gets fun when you put it in a more tactile housing, and this could be similar.

[Otherwise, Aliaz is just a nice gaming linear once you put in some replacement springs.]

You’ll never guess what just arrived in my mailbox…

Just tried a couple in hotswap.

They obviously do remind me somewhat of TTC Gold Brown V2, which tried to be Ergo Clears by upping the weight and tactility of Browns a little bit.

Feels a little heavier than Browns and a little more tactile, without the Cherry scratchiness. I’m testing them beside some Hyperglide Browns, and the Browns are way more high-pitched and chittery.

[Not exactly a fair comparison, as the Browns have GMK and the Watermelon has ePBT.]

The sound is relatively deep and relatively loud. Maybe it’s because I’m using tall PBT keycaps from a TADA68 beside other, shorter keycaps on the number row, but it’s very clacky and somewhat clunky. And audibly louder than almost anything on the board.

There’s definitely a benefit from lube here. You get that sort-of-lubed sound out-of-box. It’s basically like running Browns that are lubed and a few G heavier.

The closest thing sound-wise on my board are some lubed Pro Purples, but the Watermelon is louder. It’s also lower-pitched and louder than various Ergo Clears, which seem more subdued in comparison.

You think these would be a good budget tactile.

If you’re looking for something that feels like a somewhat heavier brown with a lubed sound straight-from-the-package, then these could be for you.

Had to take a second look at the TTC Watermelon Milkshake.

As Deadeye said, they don’t seem particularly interesting at first, just colourway. But they do sound pretty decent for factory Brown-like switches in the KBD67 Lite, beating many others.

I was testing them against the SP Star Meteor Orange [which is a pretty decent switch], and while the Meteor Orange had a very Cherry-like profile, the TTC Watermelon had a pre-travel and tactile event spring weight that I argue is too intense for a Brown.

So I replaced a couple of TTC springs with 63.5 Progressive, and it’s very interesting now. The actuation is more resembling MX Red, almost absurdly low, but it still returns and operates great.

I might populate the entire KBD67 Lite with these, as it is one of the better-sounding stock switches along with most of the SP Star variants.

Looking on Youtube, there are actually several people lubing their TTC Watermelon Milkshake switches with 205g0.

This seems extreme for a light tactile, but I understand they like the deeper sound.

If I was to improve my switches in this manner, can anyone suggest best practices for lubing TTC Watermelons? They’re like in-between Browns and Clears, and I’m not sure what a reasonable way to lube them is.

I’d personally go for Tribosys 3204. That has always been great with tactile switches IME. 3203 is an option too, but any time I tried that I felt like it was just too thin. That’s just me though, personal preference is at play there. Since you’re used to unlubed switches, ones lubed with 3203 would be very noticable to you. Also some type of oil (krytox 105 or 106 is what I recommend) for the springs as always too.

Thanks, that’s good, because I have a little 3204 on hand. I use it with the Silent Sky builds.

Definitely, the springs need to be lubed. I have some kind of blend.

There will be the lightest switches in terms of tactility + weight I’ve ever attempted, maybe too light, but it’s time to see what the sub-60 fuss is about. These are basically Ergo-Browns.