As a refresher, I designed a replacement for the Pro Micro controller that is ARM based, using the STM32 series of microcontrollers. The idea was to have something that was similar to Proton-C or Elite-C, but cheaper and open source. It uses the F0 series of microcontrollers - these allow for a relatively simple design that allows us to create an exercise in reducing component count and reducing the total bill of materials cost, while expanding the capabilities of the keyboards that use this controller.

The hope is that this design could create a USB-C based controller that is cheaper than other options currently available, while still providing more capability, more memory, and more GPIO relative to the standard Pro Micro that is still very common.

I let this project sit for a few months while I worked on other projects, but I finally got around to taking another look at this. I had issues getting the boards to perform as I had wanted to originally, so I tabled it to work on more of my wireless projects. When I got back to it and tried to change things around, turns out the hardware was never the problem! I’m more of a hardware person at heart, so it took me a while to mess with QMK enough to figure out the ARM configurations. Once I took a different tact on that, everything immediately worked swimmingly.

As you can see, I’ve made a bunch of prototypes! There are even more here that aren’t even shown. At its heart, I’ve essentially got three different configurations. One is a smaller, simpler, cheaper one that has less memory, and the other two are essentially the same but use a 48 pin controller that has started to become very popular with keyboard designers, and that one has either 64 or 128kb of memory.

And so, the primary pieces of the design currently here are: 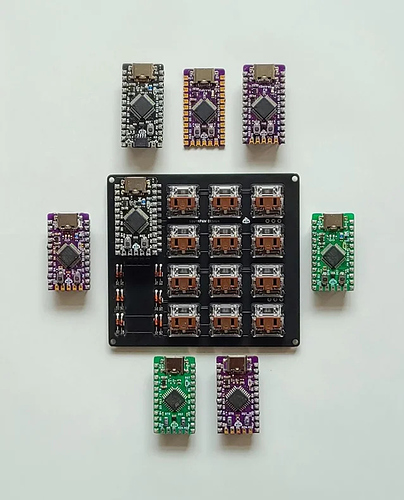