Just sharing the idea for discussion.

I’ve been thinking about ways to break-in MX switches faster. The idea is to apply some kind of polishing compound, like one would lube, to switch stem and housing then using the switch for a week for so. At first I thought of Turtle Wax which would be difficult to remove before lubing could be problematic.

Then I came across diamond paste. There are a wide range of diamond grain sizes from microns to sub-microns. 1 micron is 1000th of 1mm. Smallest I found on Amazon is 0.25 microns. AFAIK, diamond paste can be washed off. A brush would help, of course.

UPDATE: Forgot to add Amazon link to diamond paste. Pricing is reasonable. This one is 0.25 micron. I think mirrors have around 0.13 micron surface roughness.

Neat! Kind of like a rock polisher. Those would be some scratchy switches

I’d imagine a thorough sonic cleaning would ensure all the polishing compound was removed before relubing. Which might not even be necessary at that point.

What about chemically smoothing the plastic with acetone since it’s affectingly melting (smoothing) the outer most layers of the polymer?

This could definitely be plausible, although it is talking about polishing much harder materials & makes no mention of plastics. So I’d imagine it could be easily be overdone & eat up your stems/housings. On the other hand if it is that aggressive yet easily washed off you could apply it & just actuate switch a small amount of time in your hand. Then wash it off & proceed to lubing. Definitely would make lubing that much longer of a process, but if the results are really good it is something I’d be willing to add to my routine! Keep us posted bud!

Hmmm, I wonder how efficient a tumbler with really fine aggregate would be at polishing stems? It wouldn’t be viable for inside housings though.

This is the science I’m here for.

It wouldn’t be viable for inside housings though.

I don’t think a tumbler is needed. Apply the diamond paste to the stem as well as the housing on areas where lube is applied then reassemble the switch for polishing while typing. This would smooth both the stem and the housing. Paste on the stem legs may also remove little imperfections in the leaves.

That sounds like a pretty neat idea to try!

How long do you think you would need to use the switches to get the braked in feeling? (I know you haven’t done thing just curious what you think)

No idea how long it’d take. I’m planning to sacrifice a small stash of scratchy Cherry MX Black switches at the MK tinker altar to find out.

I may have to use roller balls instead of typing if diamond pasted switches feel too terrible to use.

if diamond pasted switches feel too terrible to use.

Turns out 205g0 has 0.2 micron particle size so 0.25 micron diamond paste is in the neighborhood.

So I’ve been thinking about this a little bit since the recent JWK switch GB that claims they’re polished. Wondering… how is polishing done with jewelry? Seems like maybe a dremel at the right speed with the right attachment might be able to do the job. Was thinking maybe just the sliders on the stem would be good enough?

You may want to consider ordering a “variety” pack of the paste to see which one will work. The PTFE particles in lube are smaller but they serve a different purpose. If you go too small you could be using the switches for a long time to make them “vintage” smooth.

Seems like maybe a dremel at the right speed with the right attachment might be able to do the job.

Ah. I tried long time ago. Dremel buffing tool (one with cotton disc) just ate through the stem like hot knife through butter, even at lowest speed.

You may want to consider ordering a “variety” pack of the paste to see which one will work.

Good point. If 0.5 micron (finest grit in that variety pack) is good enough for polishing gems, 0.25 micro may be too fine. So I’ll try the pack first. Thx!

While I’m optimistic with diamond paste, it may fall short of my user experience goals which are:

Even if a diamond paste grit level that satisfy both is found, it may not satisfy significant level of smoothness.

The ideal answer may lay with so called self-lubricating plastic like POM and UHMWPE. AFAIK, they work by shedding particles in response to friction, giving away while smoothing itself. If those particles continue to breakup into finer particles during use, a water-based gel (for easy cleaning) with UHMWPE or POM particles may offer self-refining polish, meaning particles start at coarser grit but gets finer by breaking into smaller pieces.

Sorry, basically just thinking aloud. If this was possible, I think we’d have seen such self-refining polishers and sandpapers in the market already.

Seems to me , that the diamond material may become imbedded, in the softer plastics… None the less, I’m interested to hear the outcome.

If I were to guess I would say the friction needed to do this would be fast or take quite a while to have a meaningful effect. Thinking of just doing it by typing I think of the physics like Uma Thurman in Kill Bill trying to escape the coffin scene. There just is so little force, over such a small surface area for a short period of time. That’s why I am thinking a break in machine might get you the result desired.

As far as easily cleaning off that is going to be difficult because it needs to be oil versus water based to last in the which during the break in period. I think a few washes in the ultra sonic cleaner at a minimum would be required.

Plastic is different then wood but I am hoping it won’t require progressively less gritty paste to achieve the smoothness desired.

I am hesitant to admit this but, based on this post, just for fun I tried this with toothpaste on a couple of switches. Toothpaste can be used to polish out car scratches so it wasn’t too far out there of an idea. The grittiness could be felt when actuating the switches but at the end of the day it did not have a meaningful impact. At least not after just 3 minutes to actuating the switch. Probably due to the hardness of the switch vs the aggregate in the toothpaste (which should not be a problem for the diamond paste). Also it was a nightmare clean out by hand. Just to be clear, I do NOT recommend toothpaste in switches!

I agree the materials and manufacturing going into switches are getting more and more advanced. The likely hood of finding something that will work is low but when you find something that makes an advancement even if it is a little one it is pretty amazing

Toothpaste typically has Small amounts of prophy paste In it, which is the abrasive substance, that a dentist will use to clean your teeth.

Good call. I actually did try prophy paste that was medium grit. My wife had some samples from college that I happen to have at home… Attempt 1 resulted in the worlds scratchiest switch, one Boba U4 was sacrificed in this

I have a fine grain prophy paste, I could try tomorrow. Looks like there is a choice of strawberry or orange flavor. 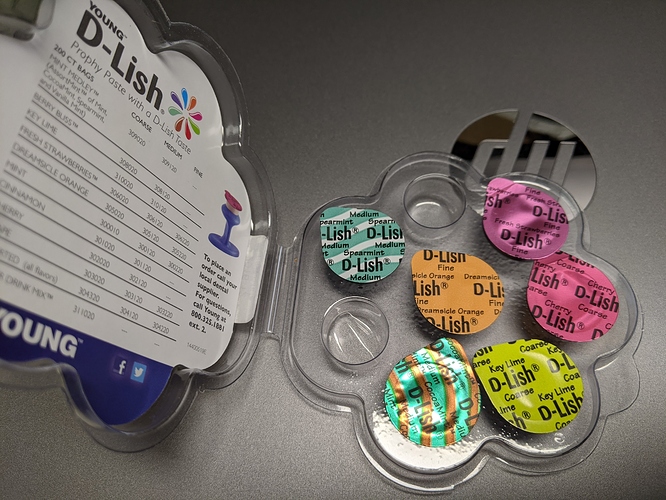