We made it folks... /r/hobbydrama

Weren’t we there a bit ago after the Glorious Panda debacle?

I think so, this is probably the 3rd or 4th time the Mechanical Keyboards community has made it to that sub.

It’s really interesting knowing that even after my absence from the community, Holy Pandas and GBs are still drama fodder.

And I’m never going to get my BKE Redux, am I?

At this point, I’d say much less so. Basically to the point of non drama.

Glorious dropped the trademark and changed their switch name to Glorious Pandas. Everyone is okay with this.
(Dorp still went in to swoop the trademark though)

And GB drama is actually rarer these days with this one probably being the only notable one recently.

Only other notable recent one that comes to mind was the gskt-00 one. I wanted in on that at first, but then sat back and watched the salt spew forth.

In most scenarios, I really think a lot of this drama could be avoided if we agree that most people are operating in good faith and doing e-commerce with limited runs is hard.

There are bad actors out there, and I’m not trying to excuse them, but I think that’s the minority.

In most scenarios, I really think a lot of this drama could be avoided if we agree that most people are operating in good faith and doing e-commerce with limited runs is hard.

This 100%, I mean CK offered 1,200 spots for christ’s sake! I mean I get it sucks to take a L on something you’ve been looking forward too, but people going as far as death threats is just insane! People need to understand this is still all new ground for the hobby & it’s vendors. In order to put fair systems into place for limited no. sales like this there are gonna be some growing pains. Alsono matter which way you shake it 1,200 people are getting S75s so it’s not like the sale was totally botched!

oooooooof lmao glad I ignored this one. I had a first round sat75 and ended up selling it, tbh I didn’t think it was a very good keyboard.

wow that sounds like a nightmare to fulfill, especially for a small operation

Yeah it is, being honest that is what threw me off of going for one myself. I hope Upas & co. Don’t have a nightmare fulfilling it, but it’s gonna be very tough with that no.!

People who are complaining about this drop must’ve never tried getting a limited sneaker. It’s much worse and happens on basically every single release there is. Don’t remember a time where a sneaker site didn’t crash within 5 minutes, if stock even lasted that long.

It is definitely an issue with people who have never been told no in their life. You are not entitled to spend your money on a keyboard someone makes, so feeling like you were betrayed after failing to buy the keyboard just exposes how entitled and smooth-brained you are tbh.

There have been 4 or 5, this was the 3rd post I made there. Couldn’t resist the urge to make satisfaction puns.

I think I managed a decent writeup? I wasn’t really involved with the drama.

The screws that held the case together were way undersized (M2 I think?) and between that and not great threading in the holes I was scared that they were going to snap just screwing the thing together, I never tightened it enough to completely eliminate the gap between top and bottom housing. The screen was a useless gimmick to me, like as far as I could tell all it was for was showing what layer you were on, but like on a 75 I don’t need layers… The “burger mount” was also just a huge pain to install, the o-rings were too small to put on easily. I also don’t need a knob, but like I get that that’s just personal preference. The heft was nice and the anodizing was nice, and like the fit and finish was nice but it just wasn’t for me.

Damn. That was a trip and a half to read through.

Sad that Upas had to deal with all that awful stuff that people had said really. 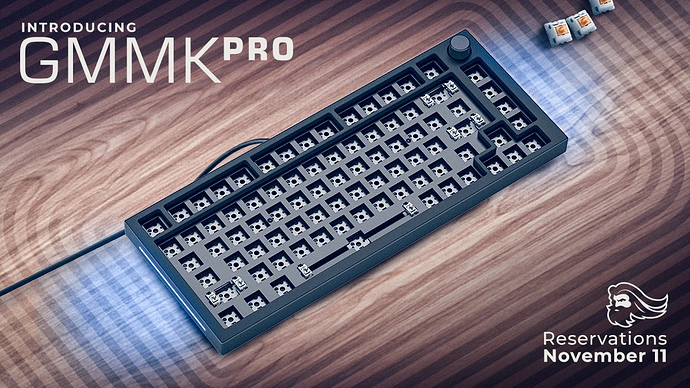 At first glance I thought this was fake…but after looking it up, not anymore. Glorious Gaming - Introducing GMMK PRO
What a move. Reasonable pricing too. Reminds of the ID80 too, but with an encoder.