What are your standards for quality control when it comes to custom boards? What's acceptable? What isn't?

First to preface things : this isn’t meant to throw shade on anyone as I do realize it’s partially out of their control; so I’m not going to name names given that, and also because they’ve been fantastic in the process so far. This is really more to gauge how delusional I might be haha

I just got a replacement board due to the first unit having issues - unfortunately this one has an issue that is basically the same as the reason I sent the first board back. 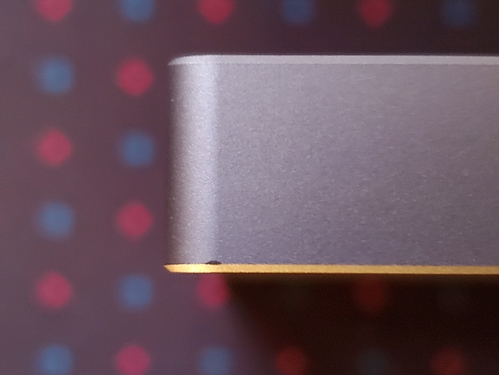 Clearly I have terribly luck to be 0 for 2 haha - it’s a little dinged up as you can see from the dark spot. I don’t think it’s simply an anodization issue as even though it doesn’t always appear this dark, no matter the angle, the general area is large enough that it’s pretty easy to spot something visually off.

This got me thinking since I haven’t seen too much about the topic as a whole - what are your folks’ expectations in general when it comes to quality control in this community? I’ve been wondering if my standards are simply too high and if there are things that I just need to learn to overlook and move on with.

My overall view is pretty straightforward, as long as damage is only in areas where you won’t see anything after building, I’m cool with it. Well, not completely but it wouldn’t be something that would upset me as much. While I am unfamiliar with aluminum machining processes, in this instance, I’m surprised this wasn’t caught ahead of time and fixed(assuming that it’s fixable); it’s not exactly hard to spot.

I haven’t been into keyboards for that long so I’d be curious to hear other folks opinions, especially people that have been into (buying or making) keyboards for a good while.

At the end of the day it’s just a keyboard; I haven’t decided what I’ll do but I will probably end up trying for a return or sell it but I’ll get over this eventually.

It’s still a bit of an emotional rollercoaster for me given the typical price and length of group buys, feels like I wasted time, money and energy

Once you get past the “ooh, this is a pretty board, let’s take photos” of it stage, it won’t matter all that much. I would certainly rather have a ding on the edge of my case than have a rattly space bar or scratchy switches.

I personally would be concerned for that blemish for about 2 days. Then I would hardly notice it.

Source: I own a lot of keyboards (understatement). Several of them have blemishes on the case.

Appreciate your thoughts - yea I’ve definitely been the same way like with my Klippe, I guess it’s just still disappointing after waiting for so long to find actual damage, and not just once but twice haha.

We’ll see if I get over it in a few days.

I received a pretty expensive board that had a small ding on the edge around the back, and was pretty annoyed for the first few days. After I used the board for about a week I realized I didn’t care because it was still beautiful and felt/sounded amazing. I agree with @pixelpusher though, once you get past the stage of photographing it and staring at it all day, it doesn’t matter much.

Is it confirmed it’s a production flaw or is there a possibility that this little piece somehow chipped off during the shipment? Just curious.

It’s not likely due to shipping; packaging included foam cutouts for the keyboard and the box was intact. Nothing else was in the box.

Depends entirely on the price and where the defect is. If it is on the bottom, inside, or back I am far more liable to be able to live with it.

I can live with anodization errors that are “gradient” in that you could almost pass it off as a variation of the light, anything more severe than that I would be upset with.

In fact if it is on the inside and/or truly not visible when assembled, I don’t care if the vendor lists it as A-stock.

When the M65-A shipped with a bunch of warped Nylon bottoms and actual dings on the surface of the board and claimed they were A-stock my heart really went out to all the buyers.

I personally had a very well-known, popular community member sell me a board claiming it had “a small anodization error” and it looked like one in the pictures too. When I bought it and it came to me I discovered it was actually a machining error and the curve of the one corner was slightly different from the others, or it had been dropped an the curve was flattened, I was livid. The individual is a mass producer of boards and knows what a production error is.

I chose not to pick a fight over it, but to this day it bothers me.

When the M65-A shipped with a bunch of warped Nylon bottoms and actual dings on the surface of the board and claimed they were A-stock my heart really went out to all the buyers.

M65-A was such a disaster and easily my worst and most regrettable purchase. I would never buy a keyboard from keyclack again and it seems like Rama completely dropped them afterward. I’m so glad I was able to get it into a state where I get comfortable selling it.

I’ve had my fair share of custom keyboards that weren’t as “perfect” as I had envisioned for one reason or another. Unless the flaw is really bad I tend to have a range of negative emotions and then inevitably get over it.

From my experience (and I’ve purchased a ton of customs) they’re generally not going to be without flaws unless it’s a TGR, Keycult, etc, but that’s part of the charm IMO. They’re limited runs of bespoke products that aren’t pumped out on an assembly line of robots making perfect replicas every time.

Looking at the image of your case, I would probably be OK with it and move on, but that’s me.

Like jewelry or fine watches, I wonder if there are services out there that can repair minor imperfections like dings.

I really tried to love it. But I thought about it for awhile and for me, yea the damage wasn’t huge, but it was large enough to spot without any effort, even with just a cursory look over. It seemed insane it wasn’t spotted right away during manufacturing.

If it were on the inside or even smaller than it was I’d be less bothered by it but yea ha.

Anyways that was months ago and I’m over it - managed to sell it for what I paid for it so it all worked out in the end.