What do we know about the Leopold "Star" switches?

People are talking about a new switch for Leopold keyboard under the name of the “Star” series.

They come in two variants, tactile and linear. I think the latter is 62 gr.

I have read that the tactile “Star” switches are mean to be a sort of Ergo Clear. You can read about the force diagram [not sure which variant] here:

They are supposedly more tactile than Ergo Clears. It is possible to buy them independently on TaoBao, when they are in-stock. This suggests they may not be manufactured by Leopold.

Does anyone know about the tactile “Star” characteristics, and of their similarity to Ergo Clears?

Never heard of these. Thanks for posting!

I think @Rob27shred had some of the linear ones

Lol…no way can I peruse the TaoBao site. My Chinese hasn’t gotten any better. I’d love to give these a try as I’m a tactile man until I’m not.

I got some of the 62g linear ones in my Sirius right now. Overall they are a very nice switch IME. Very smooth (like close to JWK/Durock linear smooth), decently tight housings (can possibly be used without films, I film all my switches though so don’t quote me here), & nice neutral coloring. The only real complaint I can throw it’s way is that they are plate mount (3 pin) only right now. So you need to use them on a fairly fixed plate for best alignment. If the tactiles are as smooth as the linears & have a MX clear like bump I’d like to try them TBH. I just happened to come across my batch on mechmarket, but I’ll ask the guy I got them from how he got them.

Thanks! I was thinking of contacting that guy also, as I saw the ad on MM.

TaoBao (via proxies) seems to be the main source, right now.

Can you comment on the sound? I know you’ve modded them, but would you be able to draw some comparisons to other switches?

I always thought that if a mfg. like Durock started copying and improving Cherry stalwarts like Browns and [Ergo] Clears, they could actually make a decent switch. Maybe something like that is happening with the Star tactiles.

[If I were Leopold, I would basically go to Durock and say, ‘here, make a 65 gr Clear, using fresh molds and smooth plastic.’ Then, I would finally have decent tactiles for factory keyboards.]

Sound wise I’d compare them to Alpacas, Merlot/Linjar/Gat recolors, milky Gaterons. Not a very loud or sharp clack to them, drowned out even more once lubed. Fairly quiet IME.

Someone has posted a Filco that they built using the Leopold Star tactile switches: 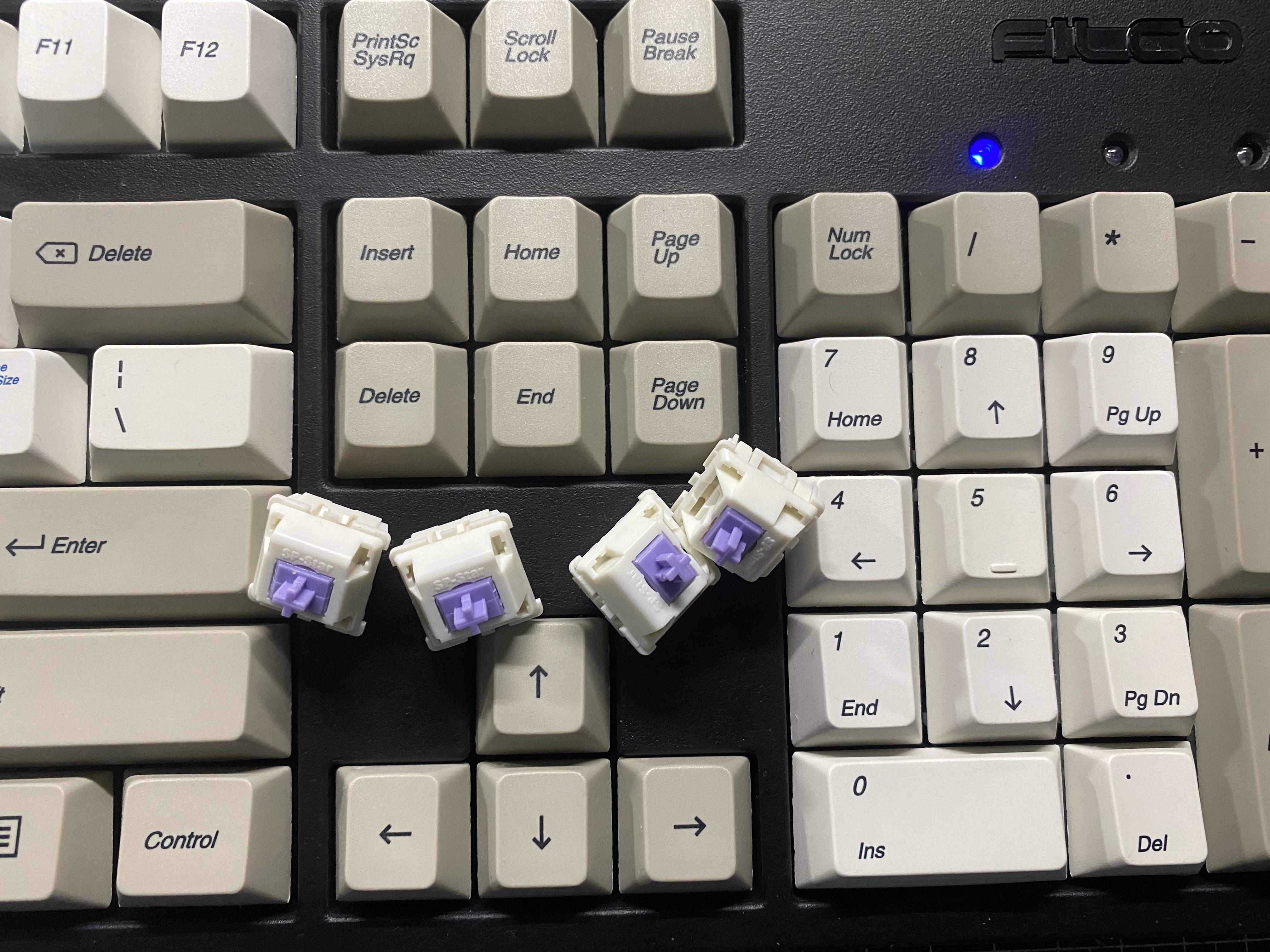 Interesting. The person in that thread says that the Star tactiles have a force curve similar to HHKB rubber domes and that the switch is similar to Holy Pandas.

I had heard Ergo Clear from some people, now I’m hearing Holy Pandas. This is wild and I have to get a few. They are apparently thocky.

I’m interested for the tactile switch. So I’m curious about a review/sound test.

The person in that thread says that the Star tactiles have a force curve similar to HHKB rubber domes and that the switch is similar to Holy Pandas.

Oh yeah, I forgot to mention. I learned some more stuff about Leopold Star switches on Discord.

Apparently, there was a collaboration between something called “Sp Star” and Zfrontier to get these switches put into Leopolds. Maybe “Sp Star” is JWK, we don’t know, but apparently Star has its own offices and factory. So it’s probably different from JWK.

The speculation is that if Leopold put JWK-class switches in its keyboards, those boards would be better than most customs built a few years ago.

The cool part is, there seems to be a Leopold keyboard on offer with these switches, as you saw in the first post. Here’s another post about it:

I also saw that someone in the U.S. was awed at the low price of Star tactiles, and is planning to bring them to the United States.

I went back and checked, and the understanding of the “Leopold Star” [Sp Star] tactile switches is still incomplete.

However, it appears that the stems are a close copy of the T1: 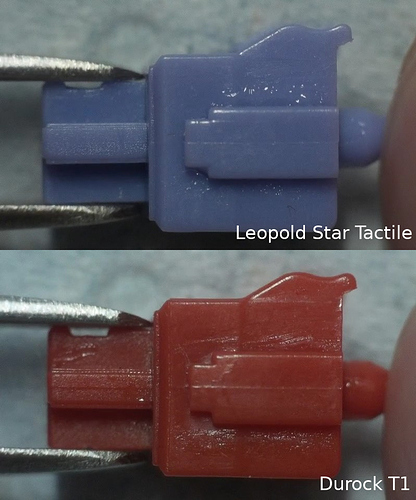 Despite that, the housing and leaf may not be identical to the T1.

Some people have reported that, despite the similar stem, the Star does not feel exactly the same as a T1. One person said that it felt like a T1, but was better on the upstroke.

Overall, the Star tactile appears to be much closer to a T1 than any other type of switch. However, the feel may not be identical. There may also be an improved version in the works, from what I’ve read.

You can purchase them on AliExpress: 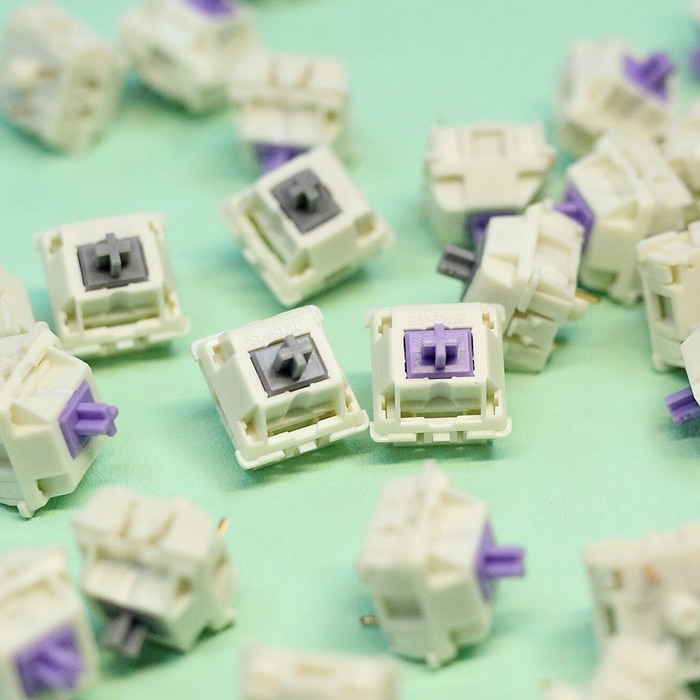 But it may be more prudent to see if they come to America. At a substantially-reduced price.

Yeah, the instagram link I posted suggests an upcoming group buy for a star switch that will be color matched to ePBT Kon Momo in addition to a coordinating bbox60 pink ABS case. My guess is kbdfans.

Ha, just looked after I made this post. The case is there already:
https://kbdfans.com/products/bbox-abs-pink-plastic-case

I stumbled across both the Kon-momo (tactile) and Nana (Linear) in-stock at AliExpress and a shop in the CONUS with free international shipping. 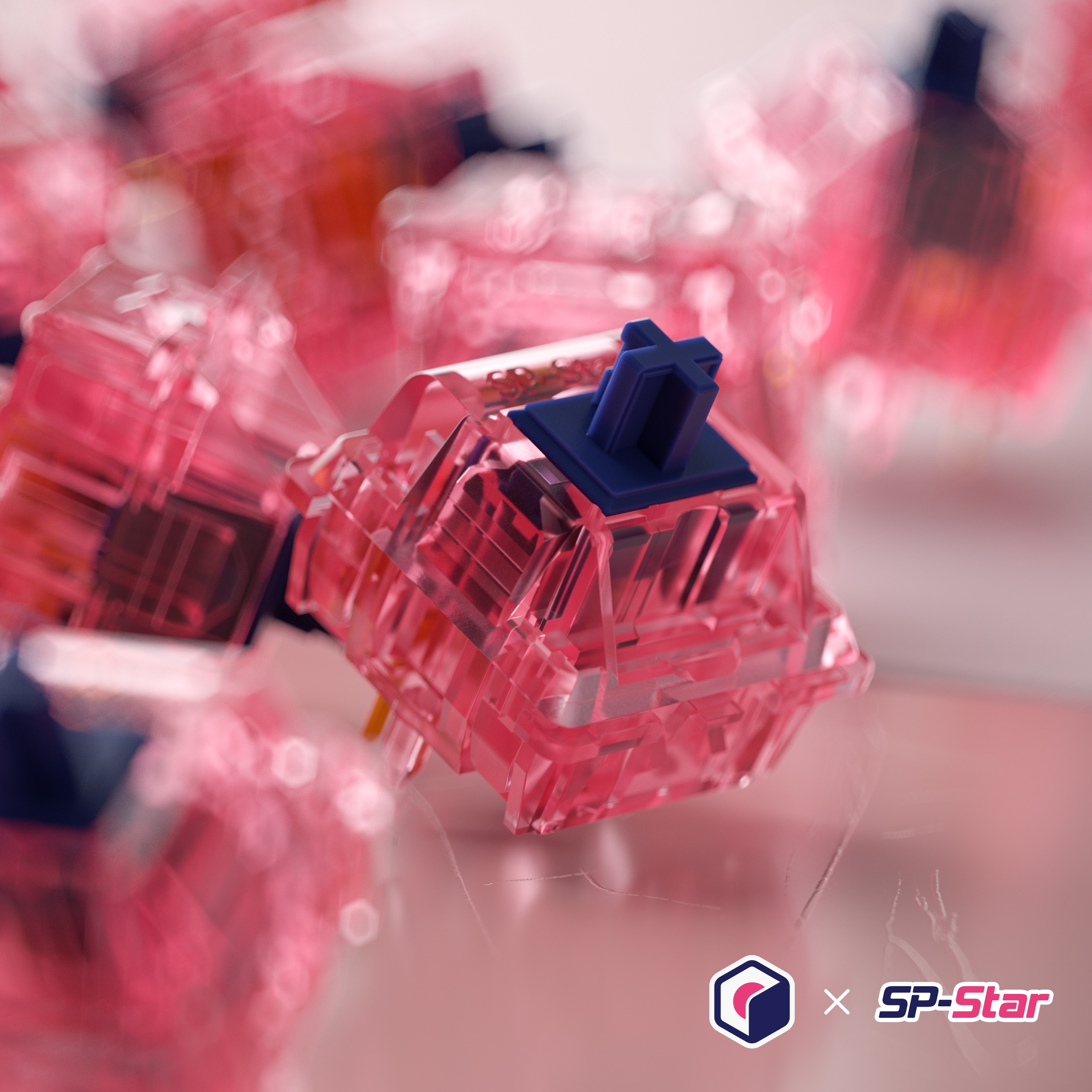