What do we know about the Leopold "Star" switches?

Im out of the house right now but I did put some 205g0 on a switch. They come with the side rails lubed with oil. I wiped it off and applied 205g0 on the stem, housing, and spring. It felt very smooth. Much like a tealio. I want to try 3204 to see if I can get that smoothness without the extra drag of 205

This is all very exciting. Do you know if the “Star” is using a T1 or instead a “RARA” stem? I can’t remember now.

In testing, I found that the Everglide Jade stem [supposedly RARA] really pops in a T1 housing, tactile but not as huge a bump as T1. I wonder if the SP Star is similar in tactility.

I signed up for RARA V2, so we’ll see how that goes. Close to my experimental Jade/T1, maybe. Shogoki is the same thing, but with 65 G instead of 63.5 G spring, I think. I kind of forgot about the Gateron Kangaroo but I’m intrigued.

Bought the kon momo switches from AliExpress and they shipped them to the wrong fucking address what the fuck. Sent them to Robstown, TX but I live in New York. That’s some bullshit.

Some new ones now too. 57g linear and tactile. SP-Meteor 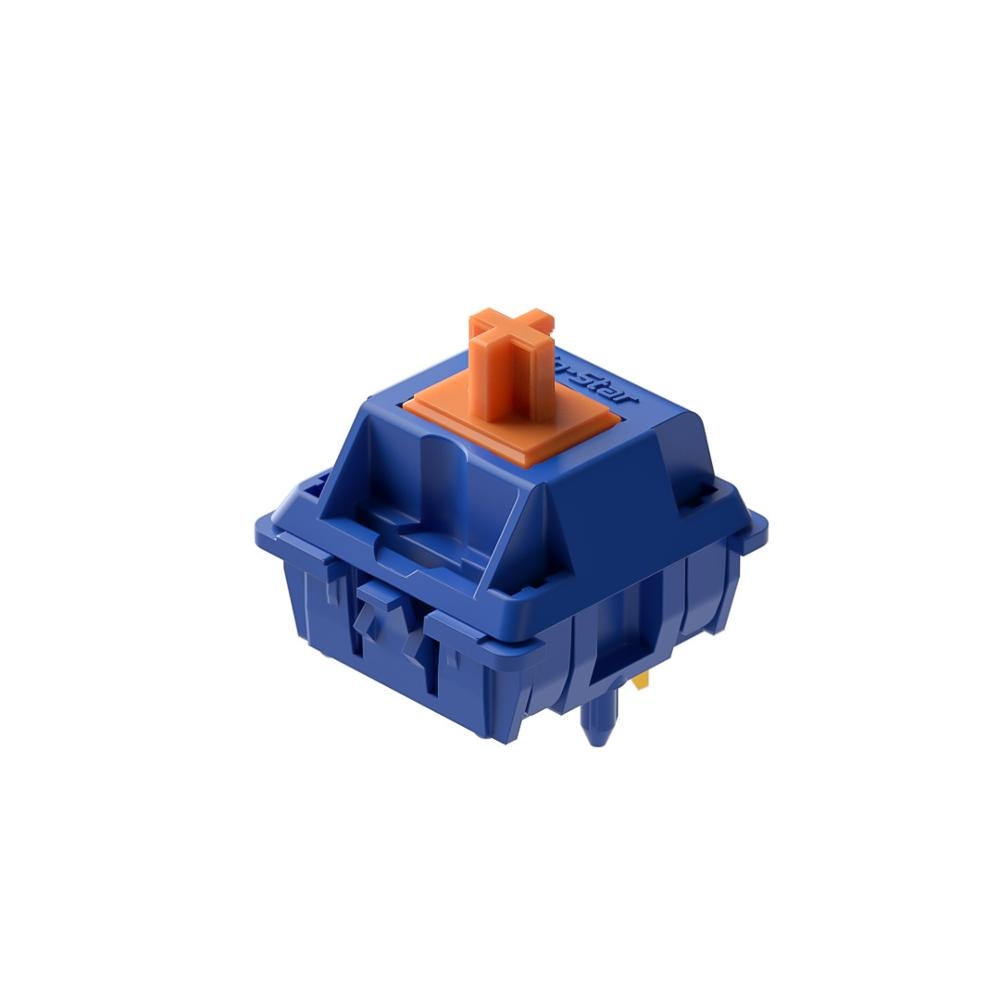 I wasn’t impressed with the nana star switch enough to try this linear. But the tactile could be nice. Looks about like a cherry brown.

Yeah, I think these may have been discounted for 11.11 and BFCM.

I forgot to mention - I received some SP Star tactiles as part of a sample bag. I’ll have to post photos in the mail thread.

I have a gray and maybe a purple, none of the Meteor as those were too new. From quick check, the Star do kind of remind me of Ergo Clear in that they’re around the same level of tactility, but they remain different. I’ll have to test them in my new hotswap board. Ironically, just as I find the perfect Ergo Clear weight for real MX Clears.

Man those colors look like they would be right at home on these guys: 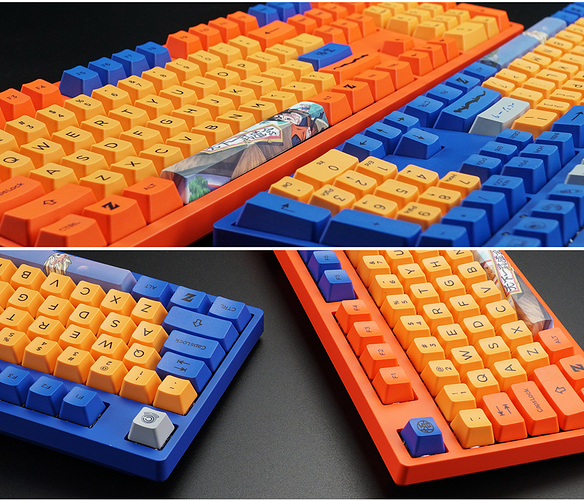 The white one of the Meteor variants got positive reviews on that AliExpress page.

I guess I forgot about it during the recent sale! Too bad. I have been testing my existing SP Star samples, and they are pretty nice overall for factory switches. Something in the range of a Brown could be really nice.

Does anyone know where to pick up some of these Meteors?

I can’t help myself.

I just ordered 10 of these Meteor switches for $10.

Here’s what an Australian said about the orange Meteor switches:

While we’re on the subject, what is that oily / watery lube that people sometimes use instead of 3204 and 205g0?

For linears like Alpacas, I think that the factory lube is more appropriate than thick waxy lube. Is there a watery lube I can buy for the Meteor switches, which will probably be close to Alpacas?

Heyyyyy that’s my anonymous review!
(I almost replied here as exactly what I was thinking!)

I recently got some of the SP Star switches and compared them to T1, generating force curves for both: 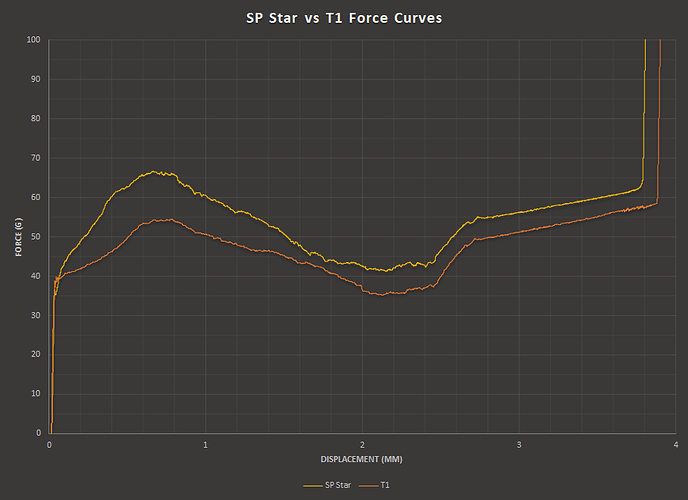 Based on their housings being very similar, along with these force curves, I would not be surprised if it was JWK making these switches.

Yes, I recently tried a purple SP Star tactile, and it was a substantial bump much like T1.

It might even be stronger than Kiwi, but I’m not sure the two switches were lubed the same. Definitely part of the T1/Kiwi family in terms of feel.

could be Leopold or “SP Star” paid for their own unique molds and JWK designs/manufacters them? I covered this in my review, but the mold markings on the linears showed that they are not the exact same as JWK.

the SP Stars and PrimeKB T1 samples I have exhibit very similar markins, some with matching letter codes on the bottom. 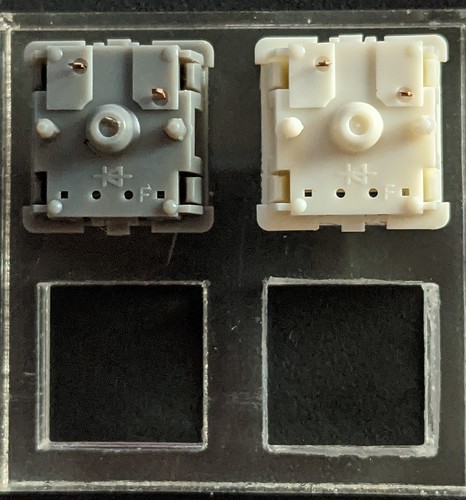 So this basically means that Leopold released a keyboard that was packed with T1s. Neat.

My SP Star Meteors just arrived. 10 of them in a sample pack.

These are Browns. Basically. Similar weight and very similar tactility.

They lack the scratchiness of the old pre-tooled Browns. Obviously using the newer molds and plastics.

Their most striking feature is the loud, low-pitched sound they make. I’m not saying they have a longer stem pole or anything, but the noise they make reminds me of Holy Pandas, with the long pole hitting the housing base. Because that’s the kind of aggressively-loud sound it makes.

The Hyperglide Browns [with GMK] are much more chittery and high-pitched than the Meteors, which are using generic AliExpress PBT.

I’m going to need to spend more time with them to pin down the exact feel. But they also somewhat resemble Penguin switches using MX Brown stems and 60 G springs. The modded Penguins have a bit more friction than these Meteors.

I can’t see myself using Meteors at present because, although they probably feel fine, they are loud. Like lubed Pro Purples using light springs [bottoming-out fully] or Holy Bobas.

These are really good, very smooth and without leaf noise. Though the pitch is a little bit high. If you use thicc PBT keycaps, you can lower the pitch.

In Korea, it is known as polar switches or polaris switches. I have two keyboards built using these switches(gray - linear) so I’ll leave a reference

Haha, thanks, that somewhat resembles what it sounds like on mine! Although mine, being tactiles, are noisier. I’ll have to use thicker PBT for the sound!

It looks as if SP Star knows how to build switches properly, so they should try to innovate a little. We need more tactiles that are in-between a Brown and a Clear, and they could work with what they have to produce something with a decent switch-feel.

They’ve got a new tactile design in production with ‘Magic Girl’ colours, so I’m interested to see how that turns out.