A Thread on Topre Modding

I’m especially surprised that the 45g is more tiring for you than the 55g.

I wonder if you limited the variables between the boards to a minimum, you could determine if it’s actually the domes alone that are putting you off (easier said than done, I realize). I wonder if its a combo of plate materials and keycaps as you suggested, or even typing angles.

Right, the 55g one feels amazing despite being the heaviest for me. I can get into a great rhythm with them. And you’re right, I probably shouldn’t try changing both sliders and domes at the same time, although ngl I’m already dreading multiple teardowns. Upon further introspection, the HHKB is my first plastic plate-plastic house board–everything else was steel plate, plastic house (Leopolds, Realforces).

I was going to say something about the plate, but it looks like you’re having trouble with both the 660c and HHKB. Maybe it has something to do with typing angle or something, since you mention the keycap height of the 660c. Maybe the layout? I know the JIS HHKB has a different ZXC row stagger, is it the same with the standard HHKB?

Another vote for typing angle being a factor, as @fatalruin was saying. The stock HHKB typing angle seems steeper than 660C (unconfirmed, haven’t found a spec sheet yet.)
The homing/layout idea you’re mentioning with the JIS vs. ANSI stagger is interesting. So on my 91U, it did take me a few weeks to adapt (I am not admittedly using it as a JIS board on MacOS), but I don’t have any misfires now–just on the num row where the characters don’t correspond to the printed keys, but it’s nbd.
How would I confirm the stagger differences between my two boards (I don’t have a caliper?)

Don’t Leopold keycaps actually have a different profile vs. Topre? Though, I thought SS2 was shorter overall than Topre.

I don’t believe the Topre caps are SS2–I have those caps from a 660M and 980M, and those are definitely lower. But the particular caps in that all-gray colorway feel off compared to the blue-and-gray or even the black-on-black (which I also own.) Someone correct me but I believe the Topre Leopolds do not have SS2 height caps.

Upon further inspection, only the JIS HHKB has a different stagger than the 91u, 660c, and normal ass HHKB, but that’s just an eye test.

On a side note, I am home now and typing this up on my HHKB. Every time I get home and type on this mfer it never fails to amaze me

When I see your tail light fish lamp I know it’s a Chono build!

ya think tape/tempest mod has any effect on topre sound? or naw 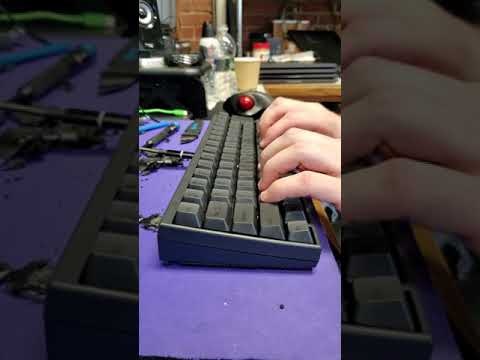 hhkb JIS in its housing 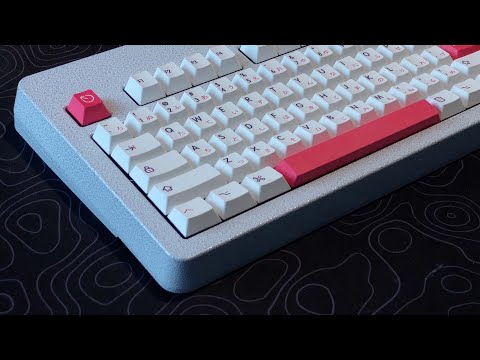 Norbaforce Mk II with an R2. but the 1U Niz sliders in stock Topre housings and Costar definitely affect the sound–I know, bc that’s the same MX-setup I’m running on my own Mk II R2 until Des releases the remaining parts.

found this one in the Unreal discord:
FC660C with masking tape 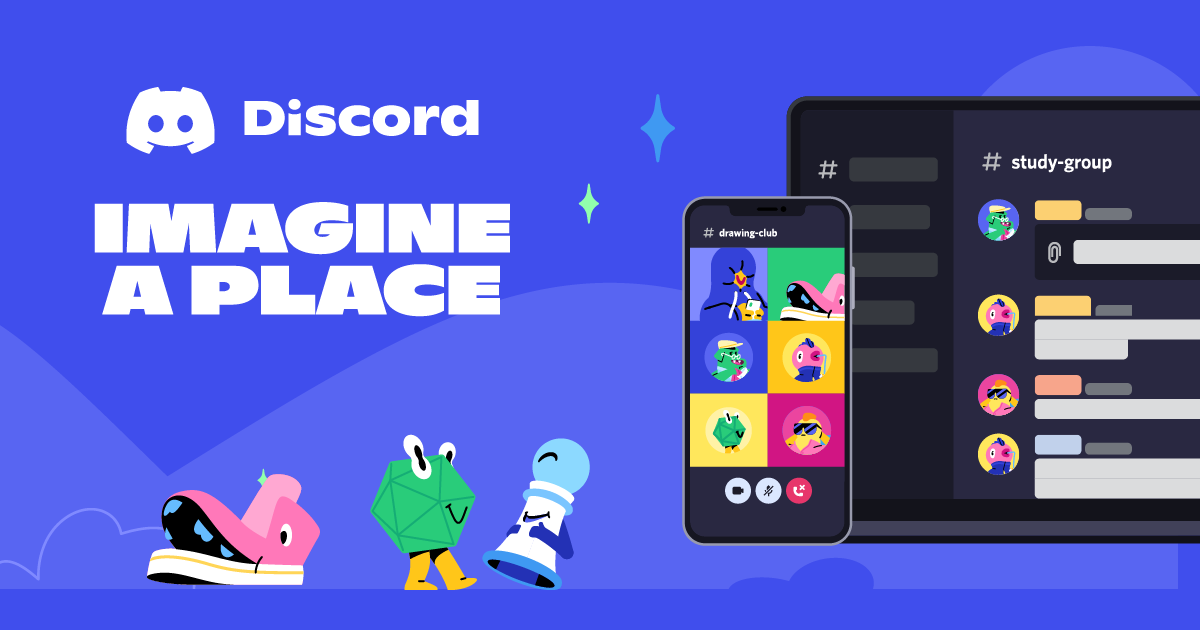 Discord - A New Way to Chat with Friends & Communities

Discord is the easiest way to communicate over voice, video, and text. Chat, hang out, and stay close with your friends and communities.

to me the taping does not materially affect sound. i like the HHKB JIS one the best but it also has the most silencing (4+4 silencing rings?)

thanks for reference, would you say it made the sound deeper, minimal or not?

i should be clear, I didn’t tape my Norbaforce–my comment was more on how Niz sliders and Costar add additional sounds that are hard to mitigate. tape will definitely not remove that. the Costar stab is mounted so precariously since it’s plate mount but wedged into the open hole left by the Topre spacebar mounts. 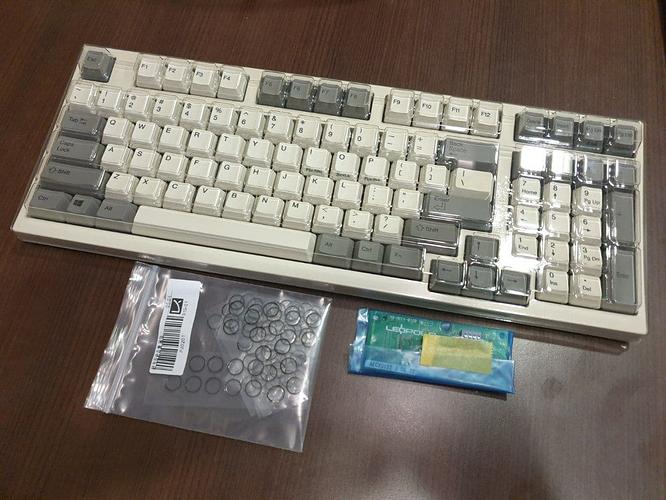 Would like some advice with modding my FC980C, which came with a Hasu controller and some KBDFans silencing rings

I like the overall stock feel of the 45g domes, but the stabilizer rattle is something I want to remediate. I disassembled the keyboard yesterday to lube the stabilizer wires, but it’s mixed results.

I wonder if it’s an incorrect application of Krytox 205g0 to the wires (not enough?)
Also, I wonder if I should be adding the silencing rings. I do like the stock experience so far, but I’m a little more hesitant on the mods given the tediousness in modding the FC980C

I disassembled the keyboard yesterday to lube the stabilizer wires, but it’s mixed results.

You will also need to lube where the stabilized stems contact with the walls of the housing. When doing this, approach from a “less is more” mentality as it is easy to accidentally overlube topre stabs and make them feel gunky.

Topre modding is tedious because you kind of have to do everything at once, unless you’re a madman that takes out the housings or something. ALSO THE MILLIONS OF SCREWS. But like I always find it easier than doing MX stuff cause its a lot simpler.

#2 rings provide more of a refined stock sound than a silenced sound profile. Might be a good starting point to experiment with rings.

Thanks to the advice from @Manofinterests @chono @sarvopari, I decided to give modding another shot. It has significantly improved the user experience of the FC980C! 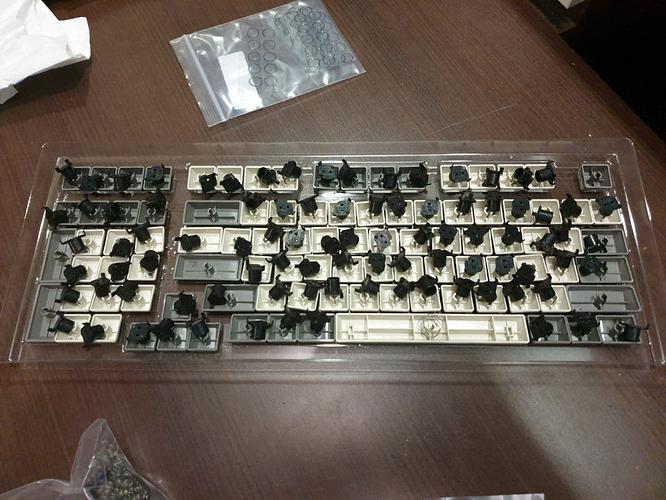 Removing the Topre sliders was a rather painful exercise. I followed a video guide to remove the 98 stems, with a caveat that there’s a little bit of plastic from the slider that gets chipped on removal. I don’t have a picture of it, but that plastic piece seems to serve as a “stopper” for the slider. Thankfully, there was no impact to performance, sound or feel when it got chipped. 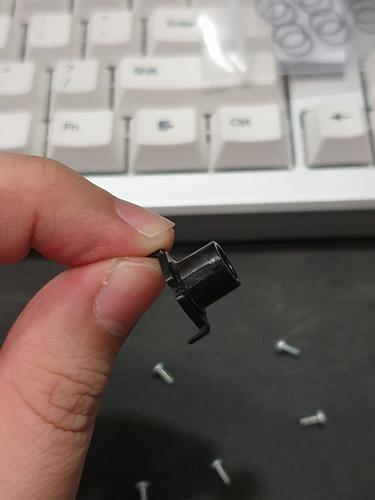 The KBDFans silencing rings were rather flimsy and clung rather tightly to the plastic packaging. After getting the hang of it, it was rather easy to place the silencing rings over the stem (stickier side down)

Lastly, I took the time to lube up the stabilizer wires with Krytox 205g0. After a good amount of trial and error, I managed to remove the stabilizer rattle. There was a slight ticking noise for the spacebar, which I remediated with a silencing ring on each of the spacebar stabilizer’s top housing and added some foam within the spacebar keycap.

One mod that I decided not to go for was lubing the slider housings. I tried it for one switch, but preferred the feel of the stock housings.

I use some foam tape in all my stabilized keycaps to help with sound. Did you lube the PCB? I usually shoot the sliders into a Tupperware and yeah you’ll have little black plastic pieces all over the place. Normally only a small chunk of the nub breaks off and will still hold in place once reinserted.

I recently purchased some more 205g0 and have to go through the process of lubing 2 more Topre boards since holiday season is here and I’ll have time now (I want to lube an R2 and a 91u). I won’t be silencing them as I’ve grown to really like the sound of unsilenced Topre. I might even go your route and only lube the stabs (which basically means I can leave my R2 bone stock since the stabs are acceptable with the factory lube job).

My problem with modding Topre boards is that whenever I put it all back together there’s always 1 issue that pops up (like ticking) and I’m always too lazy to open it back up again so I always settle for 99% instead of 100% or something.

Pretty interesting to hear about foam tape in all your stabilized keycaps! I might give that a try if the modifier keys start to have some ticking sounds. I decided not to lube the PCB since I didn’t have any problems with spring ping, and didn’t want to risk any damage to the PCB

Sounds like there’s quite a fair bit of work when it comes with modding the next two boards! Haha yeah I think unsilenced Topre has quite a distinctive sound too, and if you’re leaving the R2 stock, that’s a lot less work for you to do

I heard that R2 provides the best typing experience of the Topre implementations!

In my limited experience with Topre modding, I very much agree with you about this. Especially given the hassle of opening the board (plastic clips + many screws + sitting the domes & springs), I can definitely relate to the reluctance involved. At the same time, I find that modding the board brings about a new level of appreciation for the board! Somehow the amount of effort correlates with the amount of appreciation involved haha

I was doing some stuff in preparation of getting my lube / hi pro caps in the mail and was taking a look at my 980c. Everything is perfect except for the Enter key. It is the worst feeling of all the stabilized keys, sounds okay, but just feels a bit off. It’s definitely usable and when I hit it when I type normally it’s not a problem, like its 100% functional and does it’s job without any issues, but just feels weird. I remember thinking to myself at the time "do I take the entire board apart, fix the enter key so it’s perfect, and hope that I don’t mess anything else up? or do I just live with the fact that it’ll be fine and I’ll only notice it when I do those stupid stab tests that we tend to do randomly (I know I’m not the only one).

I can sympathize with the dilemma! Perfectionism gets the better of me, so I’d set aside enough time to trial and error until everything sounds and feels right. I did that in my last modding session - must have reassembled the board at least 4 times

anyone aware of the specs for the screws the RF series boards?

If I have a caliber can I determine the size (Mn for example)?

Does anyone have a permanent/long-lasting solution for removing Topre stabilizer rattle?

I’ve found that the Backspace and Spacebar modifiers are especially prone to ticking and having some rattle, even after lubricating the wires.

I wonder if there’s a way to mitigate these sounds - they’re not very apparent, but I pick them out from time to time

is it more wire noise or the top housing rattling? 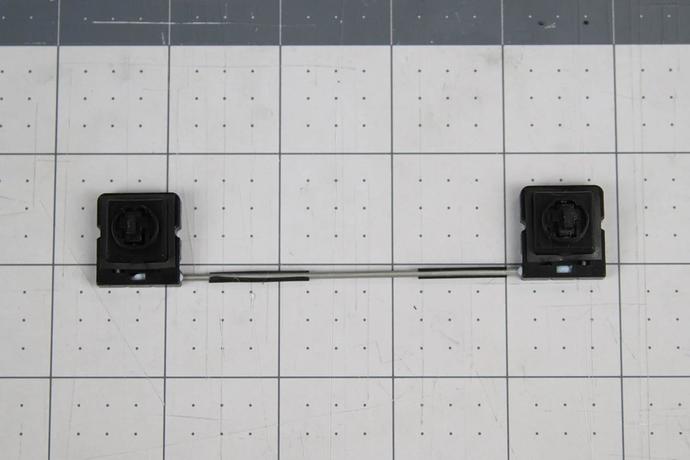 but it’s been skipped in favor of liberal lube. you could try the wire wrap perhaps if it’s wire-based noise?

Wire noise for the Backspace, and top housing rattle for the Spacebar. These “defects” only surface when I type quickly, perhaps it’s the force or angle that I’m hitting these stabilized keys. Since they’re quite minor, I’m very reluctant to disassemble the keyboard and risk some other defects or damage

The wire wrap looks like a pretty interesting mod to do! I applied a lot of Krytox 205g0 the last time around, but it seems like it’s not fully effective