And… another white set that i have to buy. Letsgo

Yep, pretty much how I felt about it the more I looked at it. Honestly would’ve grabbed one of both if I had the extra cash. The WoB black looks super classy as well! Plus the more I heard about MT3 the more I have wanted to try it so this seemed like the perfect set to do that with.

Got my set in yesterday, extremely happy with it! 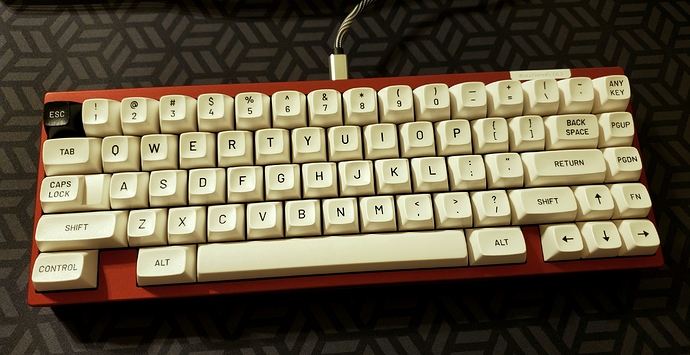 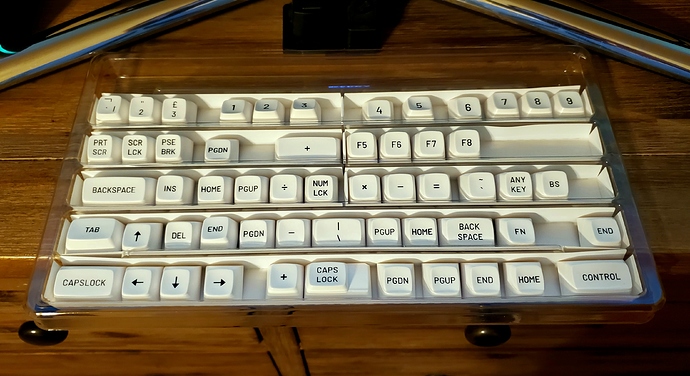 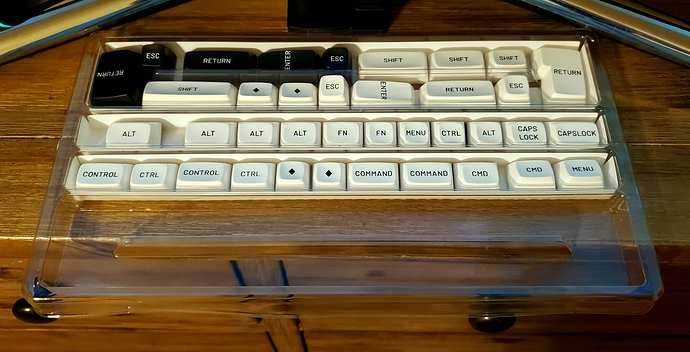 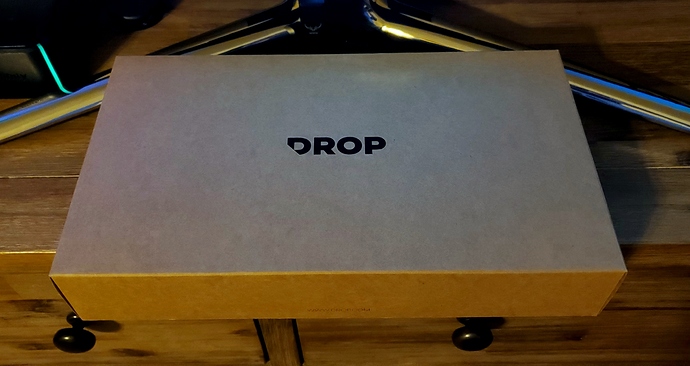 The lighting in the room I took the pic of the board in was dim & very warm, they are not that yellow. The pics of them in the trays is closer to what they really look like, maybe even a bit brighter of a white irl.

Dang, that was really quick! They look great.

I decided to pick up a set of the BoW even though I sold my MT3 Godspeed set. I don’t think my objections to that set was the profile itself – I hated the texture and the overly faded look. I’m hoping both of those things are fixed with the ABS set.

I hated the texture and the overly faded look. I’m hoping both of those things are fixed with the ABS set.

Wasn’t sure if I should post here or “What did you get in the mail today?”, but my wob arrived this afternoon. Looking forward to trying them out. (Think I need to work on my photography a bit) 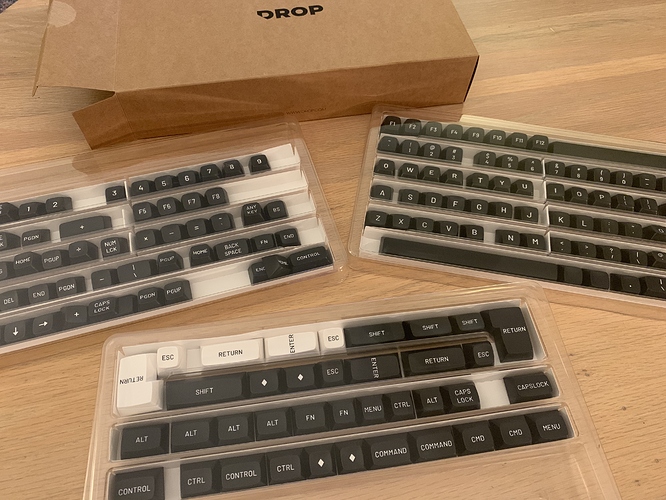 Just got SmartPost’d. Fedex had my set on a truck within 15 miles of my house, and now they are 177 miles away in the opposite direction of where they came from. And they still have to be handed over to USPS for delivery. The delivery estimate already got pushed back a day, but I’d put money on it being two. When you think about it, it’s kind of fitting that Dorp uses Fedex SmartPost, lol.

Haha. I’m experiencing the same. It’s funny bc tracking shows it went to israel and Mongolia too as it travelled through Illinois and now Minnesota. Almost got to my city but took a day trip to a farther town lol

Wow frustrating. I just got my susuwatari set in the mail today and have had to talk myself out of getting the WOB a couple of times today. I already have more keysets than I have keyboards!

You must have opted for the Silk Road delivery service.

Not gonna lie. That was such a great chuckle/laugh you gave me this morning. Cheers friendo.

edit: just checked…it says Out for Delivery today…and in my city…It might make it here today.
depending how good these look in person…i might grab a WoB set if it hasn’t reached the 500 sold units mark by then.

By some miracle, the set was delivered today. I took no time slapping them on a board for testing, and my suspicions were confirmed – I totally love them! My hatred of the MT3 Godspeed caps must have been the texture and the overly faded look. Mt3 in ABS somehow feels totally different even though the profile is the same. Even as far as ABS caps go, they have a really nice surface to them (nice and grippy feeling which I like). I was really surprised by the quality as well. The legends are really crisp, and the legend injection is really consistent (aka, the underside looks as clean as the top, unlike the recent slop that GMK has been churning out).

This package has gone in and out of the state three times, scheduled “today” two days in a row, and now they say “customer not available” - I’ve been here all day - even skipped out on something else I was going to do because I didn’t want to miss it and have to pick it up somewhere downtown.

took no time slapping them on a board for testing, and my suspicions were confirmed – I totally love them! My hatred of the MT3 Godspeed caps must have been the texture and the overly faded look. Mt3 in ABS somehow feels totally different even though the profile is the same.

Hmm, maybe I was right skipping out on the PBT MT3 sets? I don’t mind PBT in lower profiles, but really dislike PBT SA which caused me to stay away from them. Also I agree on the texture, very unique for ABS & very nice feeling. Hoping it’ll stay that way for awhile, but as much as I’m loving this profile I think I’ll have these bad boys shined up in no time!

A bunch of photos I took for a friend comparing MT3 and SA, complete with crusty workmat. EDIT: SA is the shiny one on the left, MT3 is the more textured one with the “x” symbol; 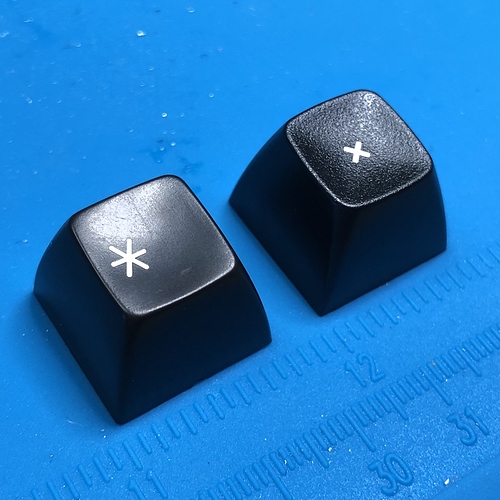 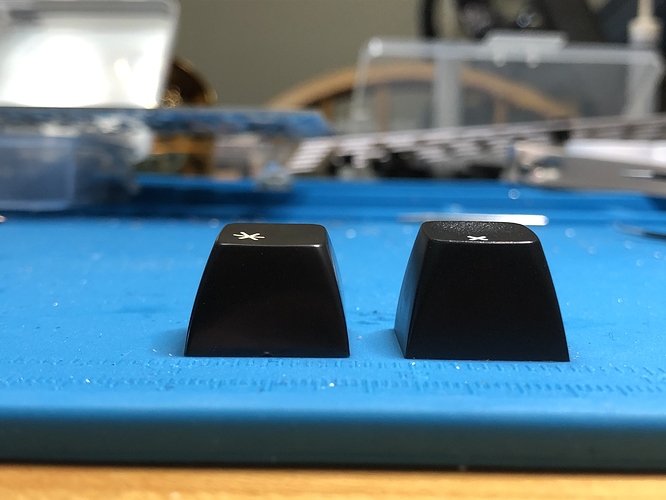 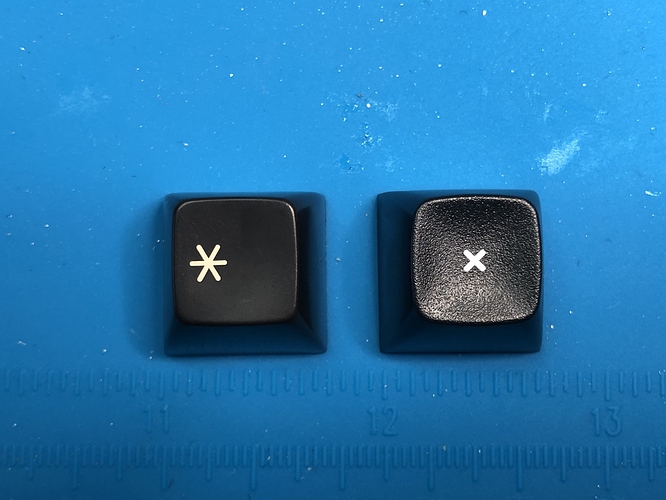 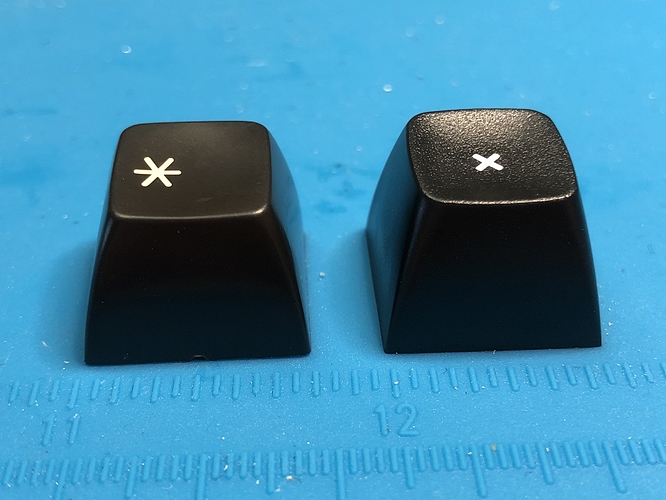 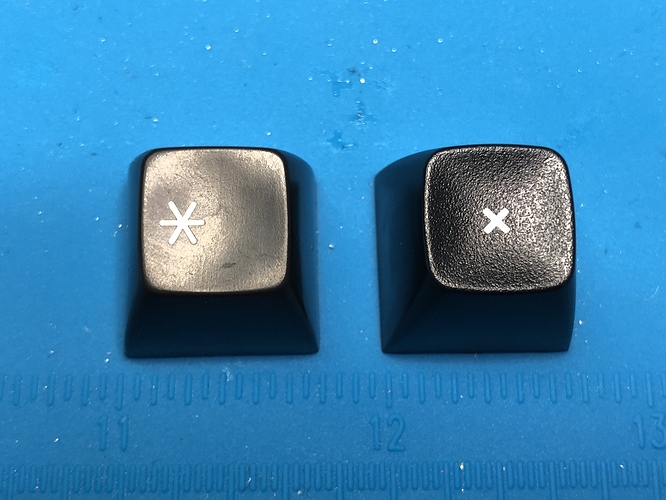 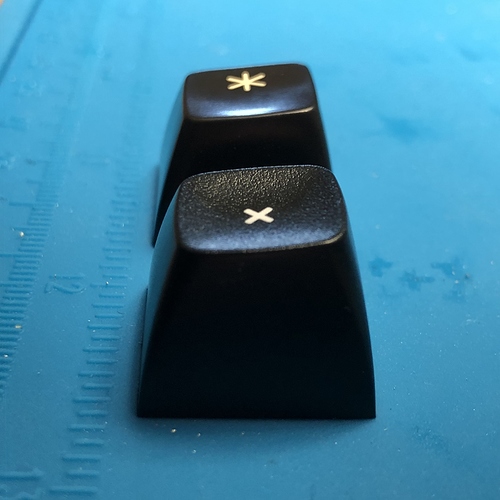 I must say that I am starting to become a SA fan.

So… Which is which?