Easter of 2021, when the Norbauer U&O sale went up, I finally bit the bullet and ordered one for my FC660C. That could have been the end, but product photos of the case with RGB caught my eye, and lead me to @r4bbl3d4bbl3’s MX PCB for the Heavy-6. While I love the idea, I am not looking to return to MX any time soon, and the post inspired me to see if I could add RGB functionality to my FC660C. If for no other reason than to say I could. The short answer is, yes, it can be done. 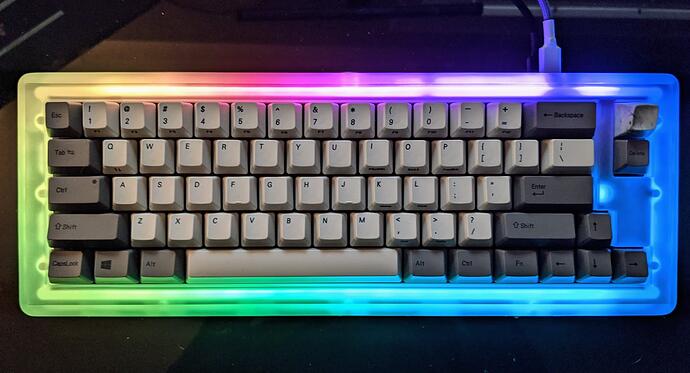 First things first, we need to get an electrical connection for the LEDs.

My first attempt at implementing the mod involved attaching the LEDs to the bottom of the main PCB and wiring them to the 20 pin connector, but ran into problems with not having enough clearance between the two PCBs to run LEDs. In light of this, I pivoted, instead mounting the LEDs on the backplate and wiring directly to the 20-pin connector on the HASU.

From the HASU documentation we see that pin 2 is the insert LED, which we will repurpose to drive the LEDs, and we will also pick up 5v and GND. I landed a small connector pigtail on my board to make the process of modifying easier. 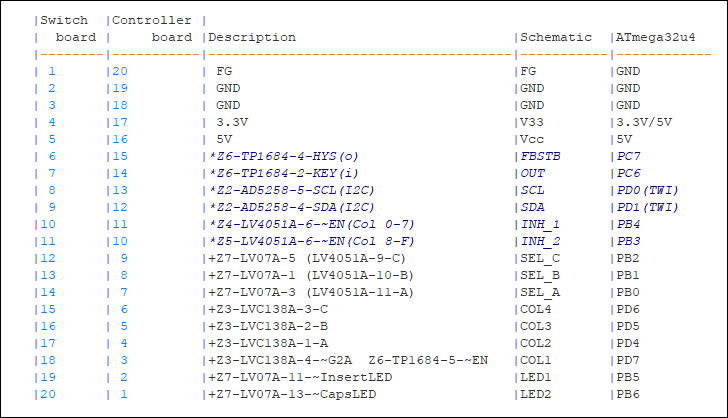 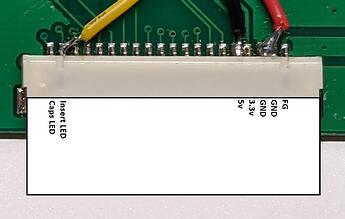 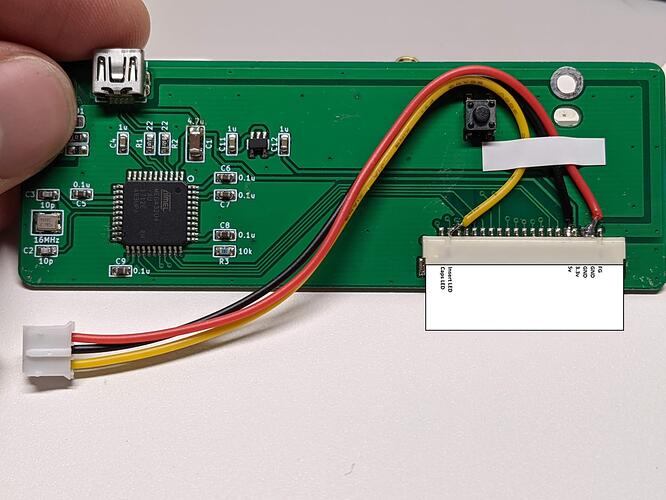 Diverging from my original guide, and in an effort to increase color consistency, I chose to install a higher-density, 60led/m WS2812 strip. Cut a strip for each of the sides of the back plate, attempting to center them and being mindful of any plate-case overlap where an LED might get pinched. Additionally, ensure that the top strip is pressed tight against the controller standoffs, as this will help fight any dark spots from the controller. Once you’re satisfied, peel and stick the strips. Connect the strips with some soldered jumpers and land the other end of the connector at the beginning of the LED strip and connect. 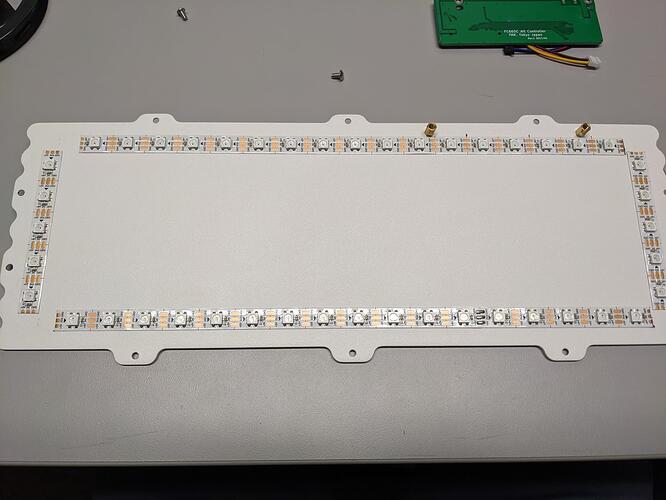 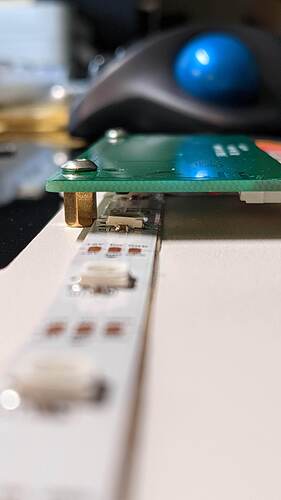 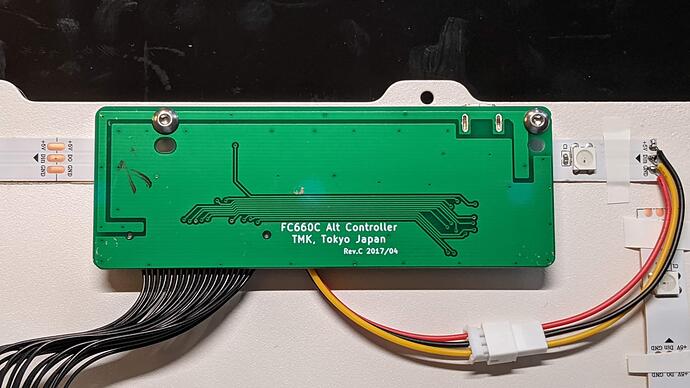 From here, you need only flash the firmware.In the QMK FC660C keyboard repo are a couple RGB keymap layouts. Pick one (Default_RGB or via_RGB), compile, flash, and you’re on your way.

I think that covers the bases. I’ve had a blast and learned a lot implementing this; please feel free to ask questions, make improvements, and share your results here!

Special thanks to @pixelpusher for alpha-testing my mod and identifying bugs, @Dave for pioneering a solution to the controller RGB shadow, and @insolentpotato for the encouragement.

Admiring what you did–it’s a bit out of my current skill base, but amazing. Possibly derp question, does it have a breathing mode (changing colors slowly?) that’s about the only RGB mode that doesn’t trigger migraines. I’d like to have lights but I can’t handle strobing and pulsing effects.

Yes! It is capable of any and all RGB modes supported by QMK. Right now I have a static gradient enabled, but I think I plan to use a single, static color in the heavy 6.

Thanks, guys! I’m curious to see if any PC heavy-6s show up with RGB before mine arrives. Also curious to see how the mounting hole in the plate plays with the light. Might end up having to cover it with electrical tape.

When my polycarbonate case gets here man, this is absolutely happening. I can hardly wait. Both for the case and the glorious excess of RGB lighting.

This is a really cool mod, I’m considering trying this mod out with my own U&B lol.
I do wonder if you think if the RGB mod is doable with the YDKB 660C BLE controller. To add, I was also wondering if the firmware changes are done to only change the RGB lighting/behaviors or if it is actually necessary for the RGB to light up at all?

Hey, thanks for the interest!

The firmware changes are absolutely necessary. You’re taking a simple on/off indicator and repurposing it to output a value the RGB leds can read. It’s a relatively simple change in QMK. I don’t know much about the TDKB controller, but it looks like it uses YMDK.io to program it. Based on what I saw, I don’t know that there is a way to repurpose the insert pin as an RGB driver. Without being able to download the firmware and make edits to it, I’m not sure how I would go about adding support for the YMDK 660 BLE.

I welcome other folks chiming in - I’m sure there’s some firmware wizard that knows more about it than I do.

This project is awesome!

I ordered a heavy-6 in polycarb (hopefully it will arrive around the end of the year). Am debating Topre vs making an MX version like the 660c-x. I think I am leaning Topre with this mod and maybe the deskey sliders later on. Looking into the LEDs there are quite a few different options. I like your idea of going with less density to reduce the number of jumpers.

There are quite a few different LED strips:
What model led did you go with? (WS2812B/C & APA102/4 etc)
Related question does it have to be one of the QMK compatible ones?

Thank you for the kind words!

This is the specific LED strip purchased (for a different project) and wound up using here. It utilizes SK6812 led, with a density of 60/meter

If I were to do it again, I’d probably go with something like this strip from digikey, or this strip (if you prefer a bezos link). If you wind up searching for your own, searching for a “5050 led strip” and “30 led per meter” will generally get you pretty close. Just be aware that many / most of the strips available appear to come with a waterproof coating, which really isn’t needed (and may even be a negative, if you have clearance issues).

And I would definitely stick to qmk compatible.

I, too, am hoping for my heavy-6 by year’s end, and am contemplating some des sliders once they roll out the 2u sliders.

Thanks for getting back to me.

I think I am committed to trying the Topre route now. Managed to snag a Hasu controller from 1upkeyboards yesterday. They come in stock every once and a while but sold out in like 2 hours. Tracking down a lead on a used FC660c next.

The Amazon link had some nifty look right angle connectors. That might work if stars alight on the spacing to use. Even if it doesn’t I might still get this kit because it also has some 3 wire roll that is bound together. That should keep everything tight and clean like you have it. 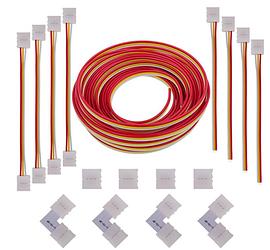 Ooh, I hadn’t considered the connectors - that could make it really clean.

Whenever you get the job done, don’t forget to update line 52 in config.h
#define RGBLED_NUM 16
My install used 16 LEDs, just adjust that number for yours and you will be set to go. I should probably also make sure the firmware repo is up to date with the latest version of QMK.

Oh man, I totally wish I’d have known about these connectors. They would save so much hassle.

Thank you @rooski15 worked perfectly excellent guide!!! Soldering on the connections properly was a little tricky but was able to do it in about 10 minutes.

I will pretty up the connection when I get the Heavy-6. Not sure if I want it coiled around facing out like this or on the bottom of the case facing up or the PCB facing down (depends on the light reflecting). Have the corner pieces too I can snap in also. 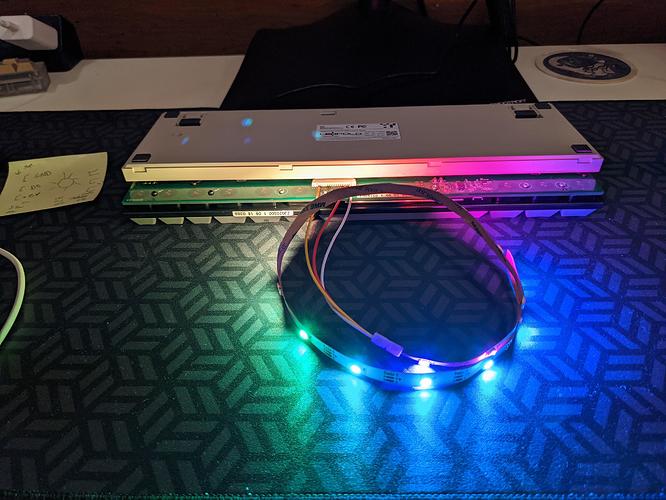 Nice work, Dave! I love it, excited to see it in the h6, and really curious to see how different mounting styles affect the RGB diffusion.

Got me wanting to try it… and of course, they hasu controllers are sold out. RIP

I wound up ordering direct from HASU cause I couldn’t manage to find them in stock with 1up. Ordered 3 and shared with friends to reduce shipping, came out about the same as 1up.

It will probably be a while until 1up gets more. They just got a limited stock last week I think, and noted that Hasu was having trouble getting the chips needed to make the controller boards.