Any switches that feel the same as MX Blue?

Unpopular opinion, but I’m still chasing the feel and tactility of MX Blues on a plastic plate. Coolermaster Masterkeys Pro S was my first nice board and something about the feel of writings tens of essays on it makes me miss it (spilled tea on it earlier this year doing a lab report, sadly did not recover).

Still trying to find a good switch without the click that matches that feel. Just got some clears to make ergo clears, but just trying them stock it’s still not quite the same. If anyone can help please do lol.

I’ve tried Holy Pandas, U4 Bobas, and 55g Topre, all of which are far too tactile for my tastes. I frankenswitched a single Paco and it also isn’t what I’m looking for.

I guess the tactility I’m aiming for is: Pre-travel, bump, post-travel + bottom out.

If i were to desolder my dead MX Blue board to harvest, would the switches be okay and the only problem being with the PCB? I believe I can safely clean the bottom housing of the blue switch with water, so long as I allow them to fully dry. Let me know if I’m mistaken.

Yeah they’d be okay to harvest, you probably wouldn’t need to clean out the switch bottoms; maybe just make sure everything is dust free.

If you do choose to clean with a liquid, use distilled water and make sure you allow to fully dry.

I’ve been using some blue inks and enjoying them, but it’s been a really long time since I used a clicky other than zealiostotles so I don’t really remember how blues feel.

The tactile even is very crisp and short, and reminds me of my Zilent V2 bump but more in the middle of the keypress. I’m borrowing my friend’s Zeal V1 board, and it’s come the closest to what I’m looking for. But if clears in a blue housing fits the bill, it’ll be more accessible for me since I have all the parts in house.

It’ll be a while until i can get to desoldering, since it’s midterm season and my exams are coming up early December at UBC.

If you’ve got blues that might be rescuable and want the feel without the noise, have you considered jailhousing them? I tried it, and while my search for the perfect switch is very definitely not over, my first impression was “Ah, this is what browns are trying to feel like”.

It’s something that I considered, but actually @pixelpusher made a post about their experience with the jailhouse mod here: Finally tried a jailhouse mod

Since “jailhouse modded blues feel similar except the pre travel before the bump is gone, and instead of the heavy spring after there is a dampened bottoming out”, I think modded clears (maybe in a blue housing) seem closer to what I’m looking for. But I appreciate the input in case anybody didn’t know about the mod!

Oreo switches are the switches I find closest to clicky tactility.

Most descriptions of jailhousing I’ve seen lock the jacket in the down position, removing the pre-travel. I thought I saw someone mention gluing them in the up position, though - I have lots of spare blue stems so I might grab some Testor’s and try that. 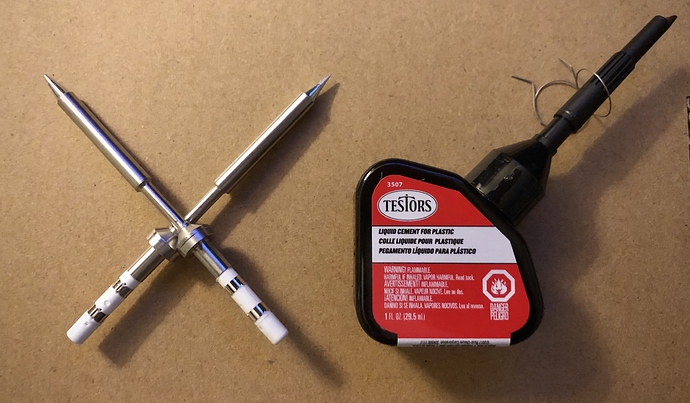 The lack of pre-travel is actually what I like about them - though it may contribute to the lack of consistency that some people complain about.

I’m certainly interested to hear about your results - what was the verdict?

Just reporting back to say that for some reason Ergo Clears with Thic Thock 62g Deliciously Linear springs were underwhelming, but with Sprit 63.5 Extreme Slow springs they’re exactly what I’m looking for. I’ll go ahead and try to harvest my old blues to make a Clear with Blue bottom, but I think I found what I’m looking for.

I have some 63.5 Progressive Ergo Clears. Could you tell me the difference to Extreme Slow?

They take a bit more force to get going, and as a result require more force to get to the same point in travel as a linear or progressive spring. Thus, there is just a tad more force at the top for the pretravel+bump which makes a difference.

I also lubed it with light 3203 as opposed to light 205g0 on the 62g ergo clear, and even though the tactile legs are untouched on both the bump is ever so slightly more snappy on the 3203 lubed switch.

Lastly, the return force of the 63.5g spring is ever so slightly greater than on the 62g. That, with its Extreme Slow force curve, makes the return from bottom out feel more of a pleasantly assisted return as opposed to having to use energy to lift my finger off of the switch on the 62g one. This was a huge feature on my 55g Realforce R2 that I found to love.

I really have to try this! [Without the MX Blue parts, tho, I’ll start with just Clears.]

I have a Leopold with heavy Ergo Clears in it. Using a strange spring, I think it actuates at 60 and bottoms-out at 62.

[That’s what on-line research has indicated, in any event].

It’s an interesting board. Perfect angle for Ergo Clears, stabs are excellent, and sounds great with GMK.

But that’s a relatively heavy actuation. 60 G. I can’t just float keys like with Browns or Jades. Decent tactile feedback, and very poppy on the upstroke. So if you put the force in, the board is very responsive. But it’s more fatiguing than 45/60 G switches.

Clears are supposed to actuate with spring weight at 65, and bottom-out much heavier. Mine actuate only 5 G below stock Clears, but bottom-out much lighter. These 60/62 springs give you only a slightly lighter experience than an MX Black spring would, I think?

What kind of spring is a 60/62? Is that like some kind of extreme slow curve as well?

Thank you to @treeleaf64 for the suggestion!

Finally got around to getting a friend to desolder my Coolermaster Masterkeys Pro S with Cherry MX Blues last night (bless her soul), and I threw these together just now.

I really like the feel of the tactility of these. It’s similar to the medium tactility of my Deskhero POM Pandas but with the bump after the start of the keypress, with what feels like 4mm of full travel for a satisfying bottom out travel after the bump.

My only gripe with this switch would probably be a slight return issue, that carries forward from Ergo Clears. It’s a little bit more apparent than the return issue of Ergo Clears, but it’s really no big deal to me. Using heavier 67g springs did nothing to change this, since the issue is at around the activation force which most linear springs would not have too much energy at. Instead, Sprit 63.5g Extreme Slow springs seemed to do the best job. I love these.

Here’s some pictures of the creation! 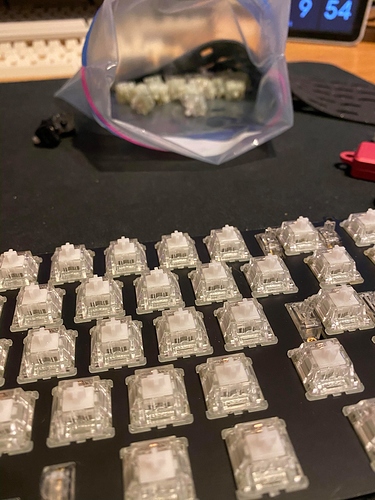 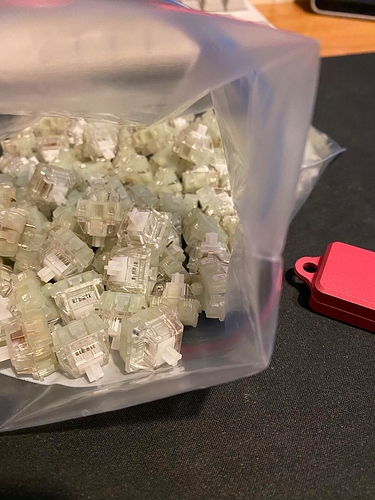 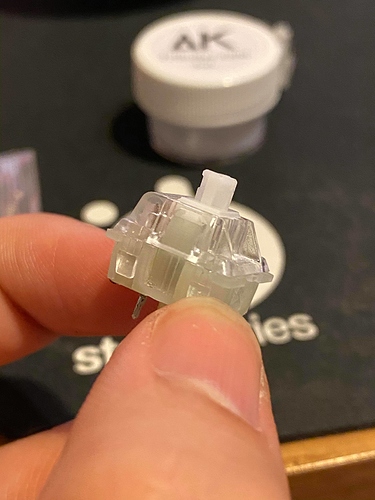