I bought some J-spacers from thevankeyboars and some 50g springs. The mod was a bit tedious, but I got it finished and I’m really pleased with the switch. I put them in one of my hotswap boards for the moment.

I modded all 100 of the switches that I had, and I ended up pruning out 8 or 9 due to irregularity in sound. Some of them had a tiny click still and some were extra noisy on the way back up. I’m not sure if it’s tolerance issues with the jspacers or if it’s the leaf spring or stem. Anyway, I ended up with almost all of them usable.

When you insert the spacers between the stem and the click jacket, you are essentially making a very long stem that sits right at the bump and actuation point. Also, the spring will be partially depressed at the top of the switch movement, making it feel significantly stiffer than normal. I highly recommend 50g springs for this mod.

What I have now feels very similar to a smoother cherry clear switch with reduced travel.

Cherry clears have a strong tactile bump and then get quite heavy. Heavy enough that it is fairly easy to type on them without bottoming out.

To me, these jailhouse modded blues feel similar except the pre travel before the bump is gone, and instead of the heavy spring after there is a dampened bottoming out almost like a topre bottoming out.

I should note that I tried the mod on some other clicky switches before deciding to go with Gateron. I tried Kailh blue, Kailh light green, and Cherry blue. The Kailh just didn’t feel good modded. The Cherry switches came in a close second to Gateron.

The cherry blues sounded better with jspacers, but they didn’t ever feel right on the way back up. For some reason the curve on the legs of the Gateron switches is better at coming back up over the bump smoothy.

TL:DR
Jailhouse mod is still a good mod if you like tactile switches and don’t mind reduced travel (but I highly recommend using a very light spring to make it feel right)

Oh, J-spacers are back in stock. I’ve been looking for them for a while. Nice, thanks for letting me know I guess.

I’m so excited to use my jspacers. I still can’t make up my mind whether or not I want to do Gateron Greens or Blues.

Still loving the mod after a few days of constant use.

I took a few potato pics of green vs blue stems. From what I can tell, they use the exact same click jacket. 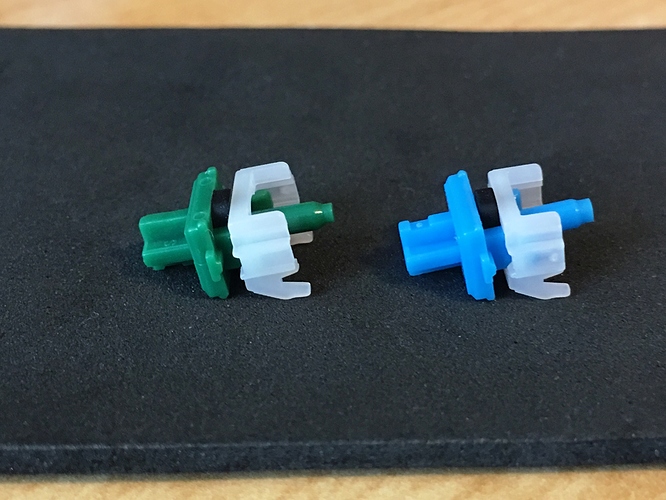 The jspacer in the green switch feels identical to the blue to me. If anything, the blue was slightly more tactical, but that’s probably just a degree of inconsistency with the switches and mod. I’d get whichever is cheaper or better aesthetically for your build.

Just make sure to get some lighter springs.

The cherry blues feeling bad on the way up could also have to do with the shape of the leaf. Cherry blue leaf has bumps that are sharper, more like a half circle and smaller, Gateron leaves have bumps that are more triangular and elongated which would give a more gradual resistance on the way up (and down, for that matter)

I intend to to this mod too.
Does have tryed those with cherry-rgb (hence retooled) housings?
since they should to be smoother and more tactile?

I don’t have any retooled blues. I suspect that they would catch more on the way back up if the bump is more pronounced. These jailhouse blue Gaterons are the most tactile switch I currently own. The bump is similar to a cherry clear but more pronounced and right at the very top.

Granted, I never soldered in my super tactile box switches (a good thing in hindsight). I find switches like box royals or box navy to be unusable for serious typing.

I think the box royal has no real soul other then that one bump, it just bottoms out.
and i was just about to build a board with royal clears,
which have a really nice bump to me, when that box switch thing got attention.

So i’ll get jailhouse blues in that board instead.
Did you lube those?
And which of those housings would you recommend?
Because there are black bottoms, milky housings and smd housings (which seem to be the newest but not have the pcb prongs? which i really like and missed on the kalih box switches)

Has any of the housings less wobble? or should i get otemu tops for those?

Do you find box royal and navy unusable because of the weight? Other than the current stem issues, thats the only thing thats stopped be from trying those out.

The bump at the top was too stiff. I couldn’t type like I normally do. If I slowed down and focused on pressing very firmly and completely bottoming out It was kinda usable. I really tried. I tried for a week. Just not the switch for me.

I’ve done retooled Cherry Blues with JSpacers, 002 o-rings let 'em click a little. The retooled housing is much more tactile than the Gateron housings I’ve used and some old Cherry Brown housings. They are WAY smoother than previous Cherry Blues. With JSpacers they are noticeably shorter travel than the 002 o-rings I use with Gaterons. I did the a 1 in 10 failure to Jailhouse Gaterons/o-rings and had to fiddle with some of the rest to be consistent. The Cherrys and JSpacers were way more consistent having just a few that weren’t quite right. I’ve gone as light as 45g bottom out and Gateron Clear springs in Jailhoused Gaterons. These lighter springs feel less tactile to me.

Comparing them to a board of Box Royals, the Royals are almost too much of a good thing. I’m keeping them for now despite the slight clicking some have developed and use them with o-ringed POM caps to dampen the harsh bottom out.

The next thing I’m going to try is Ergo Clears in the retooled Blue housings but I’ll need stiffer springs than Blues to get them to come back up. SO TACTILE!

I have a few with slight clicking too, just with j-spacers. I put them on the number row and things I don’t use as much like pipe and the right bottom modifiers

Jailhouse Aristotles top all in tactility and good feels.

That was what i was saying!
Jailhouse Aristotle is a panda housing is insane!

I’m putting together a board with jailhouse outemu click stems in gateron brown housings, with 35g springs. Significantly smoother than retooled blue housings, and quieter too.

Added QMX clips to some and it’s crazy quiet. Think I finally found a board that won’t anger the wife when baby is sleeping. It’s almost too quiet and feels like silenced topre, but way quieter.

By the way, I figured out tonight how to get rid of the little click on some of the switches. You just need a bit of thick lube in certain spots( I used Krytox 204). I’ll post some images if anyone is interested.

Oh neat, I’m curious about this

I am curious about this! Is it consistent from switch to switch? Any change in feel based off where you’re applying the lube?

I’m on vacation but I’ll post some photos when I get home. I’ve only tried it on 4 switches but it seems to be consistent. You lube the area between the click jacket sides and the j-spacers, so it doesn’t effect the feel of the switch. It just quiets the small click