Anybody try the replacement Topre silencing rings from KeyClack yet?

Just got my batch of replacement silencing rings from KeyClack on fri. I’m not gonna be opening up my 660C to replace the original ones since fortunately they have been working just fine for me (used Krytox VPF1514 to hold them to the top of the sliders, I know it sounds counter intuitive but it worked extremely well). Although now that the new ones are out in the wild I was wondering how you guys who have used them felt about them? Not sure if I want to keep my batch for future use or just sell them off since I don’t have any Topre plans for the near future?

I’d like to know what people think as well. I have a set of them that I got on Friday. I have ultralight BKE domes in my Realforce that I’m still on the fence about. But I think silencing the upstroke might make me like them more.

I just want to be able to take them back out if I’m unhappy with the key travel. But it looks like you’re supposed to attach them to the slider with adhesive backing. Not too keen on that b/c wouldn’t have have some sticky residue if you decide to remove them that would mess up the switches?

Any insight is appreciated.

My replacement hasn’t arrived yet so don’t know for sure but according to instructions at https://imgur.com/a/e4tQUWu

When removing the rings, there can be some leftover adhesive residue left. This can be cleaned out easily with a wet wipe, lysol. No permanent damage is done to the case in this way.

I don’t have wet wipe nor Lysol but isopropyl alcohol should remove adhesive residues without damaging the plastic case just fine.

Thanks for the link. I think I’ll try it out on a few sliders tomorrow to see how it feels.

This seems like a very interesting product. Too bad I just finished installing KBDFans silencing rings on both my Topre boards

Have anyone done a comparison between the two types?

How are the HHKB Type S and the silenced Topre boards silenced?

Mine are on the way and should arrive within a couple of days. Unfortunately I don’t have any KBDFans rings, but I can take some comparison shots of my Hypersphere rings and the new V2 rings.

From the looks of them they shouldn’t affect key travel too much, they don’t seem to be too much thicker than the original ones. Although the fact that they are basically stickers makes me hesitant to use them as well. I’m sure some 90% iso alcohol would clean the adhesive residue right up like @donpark said, but who wants to have to clean off every slider in their board if they decide to remove them. Don’t get me wrong I’m very appreciative Jchan went the extra mile for the community to rectify the problems people had with the v1 of his silencing rings. I’m just not sold on adhesive being the solution till I hear from some people who actually used them.

After installing KBDFans silencing rings I have some squeaking from a couple of keys, and some of them have a loud clicking on the downstroke, so I’m not completely happy with them to be honest. I imagine this might be because the rings have moved around. This would hopefully be negated by an adhesive mount like KeyClack’s silencing rings, so I’m considering trying those out just because of that.

I’m not that concerned with adhesive residue, hopefully I would never have to remove them!

EDIT: I just made a separate thread about the noise issue I have with silencing rings.

Hmm I’m a bit curious to try the new replacement rings, adhesive and all, but still a bit worried. Has Key Clack been back on track when it comes to shipping? Or has it been hit or miss as Jchan is still working on the backlog of orders he has?

Not 100% sure how fast he’s getting the replacement batches out, but I got an email like mon or tues of last week letting me know he’s starting to send them out & got mine on fri. So hopefully he’s back on track.

I think you’re right about the issue with your rings. Those symptoms sound almost identical to the ones people were having with the first run of KeyClack’s rings & the issue for most was them moving around & riding up the slider. A possible fix for this without getting new rings would be to take some Krytox oil (I used VPF1514) & brush a tiny bit of it on the top of the sliders to hold the rings in place. I know it sounds counter intuitive, but it worked really well for me with the V1 Keyclack rings.

Here’s a comparison of the thickness of a V2 ring and a Hypersphere ring. Please excuse the shotty image quality, unfortunately I don’t own a macro lens. 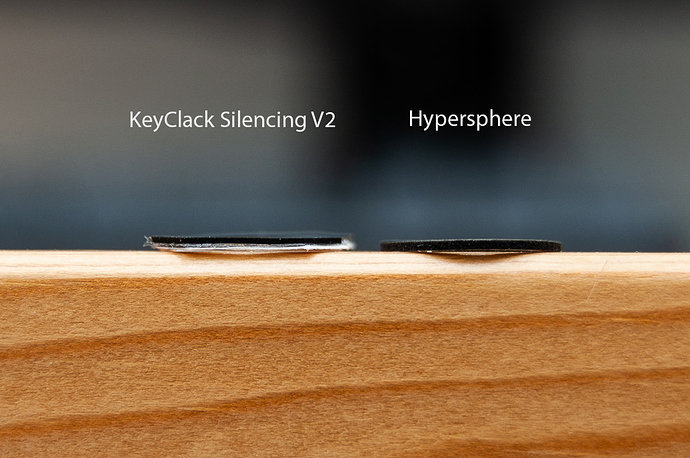 Interesting ! Didn’t know these existed. Just got my order of kbdfans rings for my novatouch. Can those who have these upload a sound check video ?

I’ve looked for a bit and didn’t find a thread on keebtalk about this so: Anybody here is uses or tried the soft-landing pads or the ironed soft-landing pads from Elite Keyboards? I’ve found some things on geekhack, like that you can get a nice thin thickness by ironing them, but some said that it expanded over time and wasn’t worth it because of this. You guys have any opitions about it? Any comparisons with the keyclack v2? Or any other?

Thank you in advance

Great pic! Thank you so much for that! does it get any thinner when you peel the adhesive paper backing off? at the moment it looks like it’s riding a bit high compared to the hypersphere, but looking at only the black rubber part, it looks thinner to my eyes

I haven’t tried peeling off the paper yet. I can try doing it tomorrow and take a new picture. But the V2 is definitely thinner than the Hypersphere, at least by a good 25% I’d say.

v2 appears to be about twice as thick as v1 rings. Key travel wasn’t noticeably short but I only tried a few keys so YMMV. I am planning to put back BKE Redux domes along with these rings because, while v1 was OK for stock HHKB 45g domes, v2 should be better with more ‘violent’ domes.

I’ve been using hyperspheres with my NT for some time now. No issues to report other than they do work as advertised.

I actually found the V1 KC rings to be perfect for use case with BKE extremes. Now obviously they does not silence the up strokes nearly as well as thicker ones like hyperspheres, but they definitely do make very noticeable difference in the loudness of the upstroke. Which is pretty much what I wanted in a topre silencing ring. Something that slightly dampens the noise of such violent domes without affecting the key travel/feel at all & also retains the lovely thock noise we Topre users love so much!

After reading your guys feedback (thanks for all the great replies BTW!), I’m planning on keeping my batch of the V2 KC rings for a future project. I think they may not ended up being as good as the V1 rings to me but still seem to be the best fit for my preferred criteria. If all goes well I will hopefully be picking a RF TKL soon to fill the TKL void in my board collection & I plan on using my V2 rings to silence it. I will definitely report back my results here when that happens.

I installed the keyclack v2 rings on my fc660c with stock domes recently. Before that I had the kbdfans rings which I liked a lot, but occasionally I had problems with them sliding up the slider. The silencing of the rings is very good, a bit better than the kbdfans rings, however they also reduce tactility noticeably more. I really like how secure they are but I wish they would be a little bit thinner, to preserve as much tactility as possible.

Edit: I now installed bke redux lights and with those the reduced tactility is not a problem as they are still very tactile. So I can recommend the v2 rings when used with bke domes.