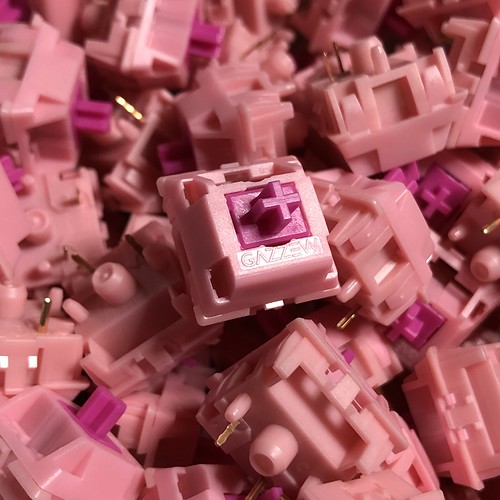 Gazzew does it again.

I got some of these in the mail recently and am enjoying them quite a bit so far - seems as good a time as any for a discussion thread about Gazzew’s silent linear.

TL;DR: Soft. Fluffy. Bouncy. Pleasant to use and very quiet. Smooth out of the bag, only gets better from there. These are really nice.

I’ll post more information as I gather it, and of course I’d love to hear what you folks think of these switches. 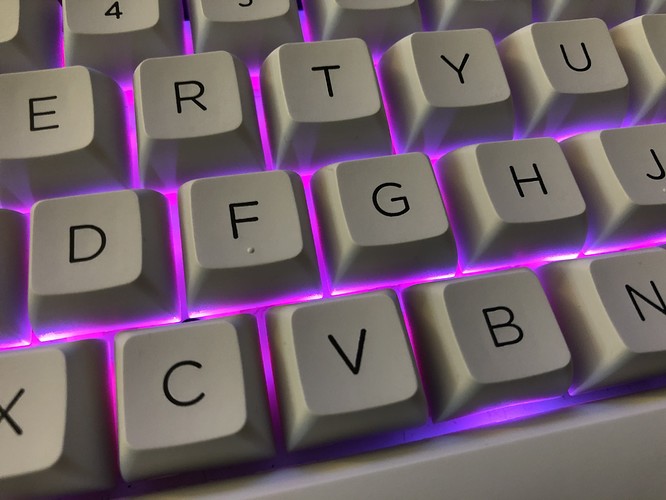 glad to see his silent linear stem in a different colorway. I liked the originals, but the shiney metallic grey stem didn’t go very well with a lot of housings, but this looks great! and it comes with one of my favorite weights by default?? Gazzew just cannot be stopped.

Just got my batch of clear top Bobagums myself, and they’re quite good. Was using a variant of the bobagums earlier (gazzew silent linear stem, u4 bottom and clear top) and these seem a tad bit smoother than my earlier frankenswitch. Smooth, no stem wobble and a nice soft cushion out!

Would totally consider using these at my workplace if offices ever opened up again!
Here’s a pretty scuffed attempt at a soundtest: Youtube 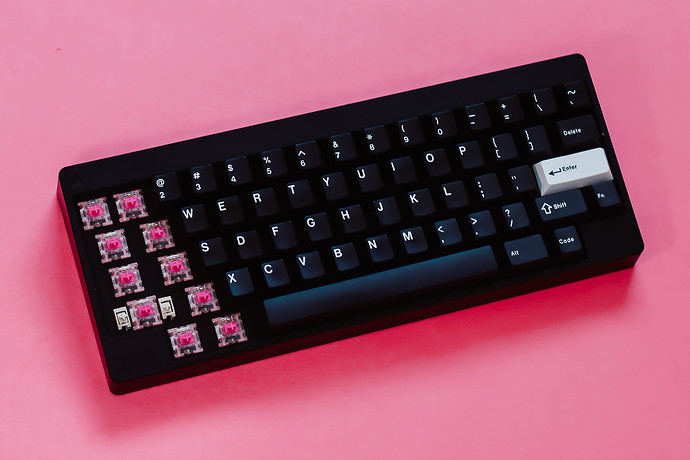 oh they sound nice. I wonder what filming them too would do

If they are like regular bobas they won’t need filming. The tolerances on the housings are really tight.

So these don’t need lube? At stock 62 G weights [if available] these could be awesome silent linears right out-of-the-box.

Mmm, these look yummy. I’ve been loving my silent tactiles that I nabbed off of MKUltra.click and haven’t felt the urge to lube them even once, so these lubed must be amazing…

I am trying unlubed Bobagums in my U80 now. It’s quite soothing. They’re very very quiet. Feel very smooth and actually no spring ping. I may lube one switch and see if there really is enough gains to be had with lubing but I’m very satisfied with using them stock.

I have a sample and it’s ridiculously smooth, maybe the smoothest switch I’ve tried, more than Durock POM and Ink Blacks which both set a very high bar.
On center and off center are both as smooth, housing is solid quality, super tight even after opening, and stem wobble is great, spring is lubed out of the factory, basically ready to use as is.
Just like the rest of it’s line, puts other manufacturers to shame.

Only downside [to my taste at least] is that the damperners are mushy, but I guess that’s the goal as harder dampeners will be louder, as you can see on the BOX silent pinks or Ink silent blacks (well not really loud per se but you get a “thud” sound), the bobas are whisper quiet.

They produce annoying high pitched sound, which can be somewhat reduced by lube, but not completely eliminated. Other than for this purpose, they don’t need lube.

I remember my samples from some time ago were a bit squeaky, or there was a bit of shuffling noise. Quiet switches, but there was some distracting noise.

So thanks, that reinforces what I remember, and justifies the concept of lubing them for sound characteristics.

there was a bit of shuffling noise. Quiet switches, but there was some distracting noise.

Thank you for describing what my few misgivings are about this otherwise affordable and best out of the bag/stock switch. Bobagums feel and are better than MX Silent Red but the shuffling, swishing noise is audible. I’m with the person who said they might try lubing to see if sound is ameliorated but for my personal thresholds, the swishing sound can be lived with.

The mush of the dampeners takes a bit of getting used to. And is more apparent when I’m coming off of Topre boards and switching to an MX board with Bobagums. I find it takes longer to reestablish a good typing rhythm and speed because of the difference in rebound and how the dampeners do not let you feel the actuation as Topre domes do. Apologies if that isn’t stated properly.

If anyone is curious about Bobagums I would say to stick to the 62g and 68g spring weight; 52g is even lighter than basic Gateron Yellow. The silencing is very good for office-bound keyboards.

I bought mine from 3DKeebs who I think only had 52g on stock at the time so I may go and swap the springs to some Long TX springs of heavier weight.

I’ve never typed on such light springs before. Previously I had only typed on 62 or heavier.

Thanks for putting it so well.

I agree with everything that you say, except for the 52 G spring weight. Those springs do make it lighter than Gateron Yellow, but as someone who prefers light-tactiles, the 52 G are a fun and carefree weight.

I’d say that 52 G OUTEMU springs really stand out. Long springs that give a respectable weight at the top, but don’t require too much force to bottom-out on [with dampening, that’s fine]. They rebound strongly with linear switches. They have a distinct poppy feel with Bobagums, and almost a kind of ‘ghost’ tactility.

Reminds me of those older quiet and light rubber-domes that used to populate the market in the 90s and early 2000s.

I agree with everything that you say, except for the 52 G spring weight. Those springs do make it lighter than Gateron Yellow, but as someone who prefers light-tactiles, the 52 G are a fun and carefree weight.

Ok good I thought I was hallucinating the weight difference with Gat Yellows. I’m also even further messed up because I go between light Topre (30g stock, 35g Des Tiffanies) to stock 55g then to Bobagums. It just feels extra strange calibrating to the Bobagum board after coming from the aforementioned boards which I believe leads to my personal confusion

Long springs that give a respectable weight at the top, but don’t require too much force to bottom-out on [with dampening, that’s fine]. They rebound strongly with linear switches. They have a distinct poppy feel with Bobagums, and almost a kind of ‘ghost’ tactility.

If this gives Bobagums a hint of popback, I’d be interested in doing this spring swap.

Yes, Bobagum will be very different from Topre, in sound weight and feel.

They also use different measuring systems [between Topre and MX].

45 G Topre feels heavier than MX Brown, itself supposedly actuating at 45 G. The tactility and force curve between them are very different.

I find 45 G Niz to be noticeably heavier than MX Brown, even though Niz is almost linear, and 45 G Niz is mismeasured anyway [it’s more like 49 G on some switches].

30 G would be incredibly light in an MX switch, yet 30 G Topre is probably similar to a like normal MX light tactile or linear.

I guess what I’m saying is, the Topre weights are printed as lighter than how MX seems to measure them. It’s hard to measure across them.

All I know is that I would like to try 30-35 G silenced Topre or variable Topre, as I prefer light MX tactiles, lighter than the 45 G Topre/Niz.

Topre has a rich tactility that doesn’t quit after actuation, maybe increases. A full stroke of tactility, resistance, and then upstroke. Whereas 52 G Bobagum has only the tactility of the dampening pads producing friction, as well as the non-frictionless MX design that gives some faint tactility to linears. So, far less than Topre.

And Niz collapses a lot like a typical rubber-dome. So there’s resistance at the top, and then it just breaks and crashes as a slightly-tactile linearity on the way to bottom-out. So, again, different from Bobagum.

That’s what I like about Bobagum. It feels like Bobagum. That 52 G spring with ghost tactility is like pressing on a small invisible ball of tapioca. It’s distinct.

Also, from what limited information we have so far, if you are looking for silent linears that have a minimum of ‘mushiness,’ apparently the new Kailh Deep Sea linears are maybe the least mushy linears so far.

They use a new non-stem dampening system built into the housing, sort of like Kailh Fried Egg, and it produces less friction than comparable switches such as Kailh Silent Pink.

I am appreciative of you taking the time to describe the Topre/MX weight differences. Didn’t have that language/experience to be able to say it. Looks like I am going to want to spend time with Niz–I do like the linearish characteristics of lighter stock Topre. And variable has been surprisingly decent–only have tried it in R1 Realforces–and I like it better than stock 45g. Topre 45g is perplexing to me; it’s neither heavy enough like 55g, nor is it light enough to be close to Deskeys Pinks or Niz 45g

That 52 G spring with ghost tactility is like pressing on a small invisible ball of tapioca.

I should get milk tea soon.

As soon as I Google this I’m going to laugh even harder, aren’t I? Is this real?

The Chinese manufacturers have really gone wild with naming switches. The sky’s the limit, there.

I fully expect to see obscure translations like “Durock Ribald Peasant” or “Kailh Blistering Unicorn.” The latter is hardly an exaggeration.

It seems you can name a switch anything to please a particular market niche, and get away with it broadly.

Then, you have the Anime situation, where there are whole keyboards named after some animated heroine.

The Topre/MX weight/measuring difference is a huge topic, and there are some very erudite and learned people who can tell you more. I’m sure some articles have been written about it.

But actuation, ‘weight,’ bottom-up and upstroke are different beasts between the two systems, so anyone trying to compare the two will be wrong-footed.

Boba and the like are actually popular themes in keyboards, a lot of overlapping interests there, there are Boba keycaps, switches, deskmates, etc…

If you are looking for phantom tactility in your Bobagums, you might consider a spring like that in the MX Clear. Before custom parts were common, the Elders made something called “ghost blacks” by putting Clear springs in MX Blacks. It is known.