Got a notification on discord about these 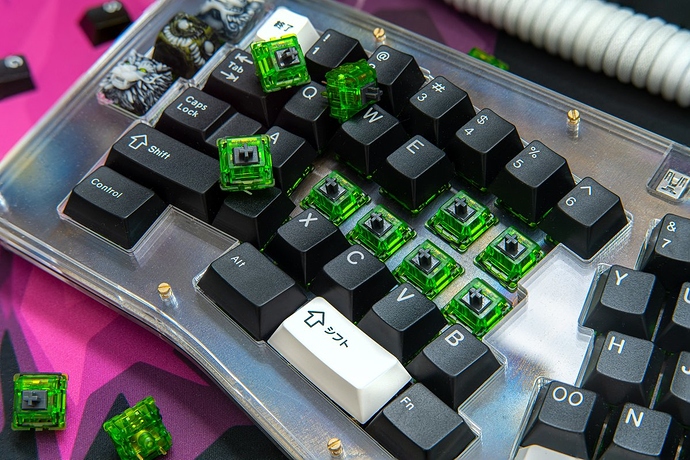 Hope all of you are enjoying the summer! Last month we released a fresh batch of Tangies, and to end summer with a bang, we wanted to serve up the debut round of Kiwi Switches! Here’s what you need to know. What are Kiwi Switches? The Kiwi Switches...

Yeah, I remember these being advertised during the spring as something that would arrive after the Tangerines.

I just did a search to try and find out more about these. Apparently they are 67G T1s in a Tangerine housing, essentially. I’m not sure, though.

Maybe I should finally try those T1s I bought with my Alpacas to see if I’m going to like these. Many T1s have leaf ping issues, I understand?

I’m simultaneously trying to learn about the FFFF switches, which are now available in Canada. It’s hilarious, there is virtually no information posted on what these switches are like, but a 20K GB sold out in no time.

The one good thing to note is that they have limited purchase quantity to one. Hoping they won’t sell out as fast as they Tangerines. I would love to get my hands on them but will not pay some of ridiculous markups.

Based on the discussion in this thread, I took apart some 65 G T1s and 67 G Tangerines.

This was my first use of T1s in general. I have to say I’m not a fan. The sound is horrible [it’s what put me off buying them in the first place]. They obviously are meant to be lubed. I’m using the red T1 stems with the gray T1 housings in stock configuration. They are tactile, more than I need really, but I can see how people would like this.

In the Tangerine housing with 67 G Tangerine springs, the difference is not as great as one might expect. They are a little less tactile, but the greater spring weight kind of makes up for it. It is almost like using stock T1s.

The T1s with 65 G T1 springs in the Tangerine housing was my favourite. It’s light enough for fast typing, but heavy enough not to bottom-out if you’re careful. Definitely a little smoother and less tactile than the T1 housing. I don’t mind tamping down the tactility a bit. I could almost imagine typing regularly on this.

Also, it seemed like the 65 T1gerines would be responsive for gaming. The 67s were a little duller.

Both Tangerine variants of the T1 were more tactile than I needed them to be, but they were plenty speedy for typing. If I were to buy the Kiwi switches, I would probably want to change the spring to something resembling the 65 g T1 spring. Maybe they will ship with something closer to that than the 67 G Tangerine spring. Also, they would need lubing and maybe filming to deal with the sound, which is unacceptable.

The Kiwis in the typing test here:

sound a little better than what I made, but I still think the sound is high-pitched and busy.

The Kiwis will undoubtedly sell out quickly. I don’t think I’m going to buy any this round. The Tangerine housing has the potential of improving the T1 switch, but I’m not a fan of the T1 stem or T1 tactility in general. But light modding should adjust the switch to people’s preference. That’s just my opinion.

Thanks for testing and sharing your experience.

I reached similar conclusions in my own testing so far; that is, nothing I’ve swapped into a Tangerine housing has been particularly remarkable, with one or two combos being genuinely decent but not exceptional. (Tuned stock ones are chef’s-kiss delicious, though.)

It does make me wonder if these have the same or different leaves vs the Tangerines. Once these ship, I’d be interested to see how they compare to stem-swapped Tangies - and how close to the description the Kiwis really are.

Those colors, tho - if I were to buy these, that’d be the main reason.

Thanks for the write-up. I should do my own testing before I buy in. I’m currently typing on Lilacs and found them to have a better feel than stock T1’s even though they share the same stem. I’ll have to throw a few stems into tangy housings. I planned on buying some Kiwis for another build and assumed they would feel fairly identical to the Lilacs. For reference, I only lubed the spring, the point on the bottom housing where the spring makes contact, the underside of the stem where the spring also makes contact, and the top housing where the stem makes contact – the lilac housing was so smooth by itself, I didn’t want to add the drag that lube sometimes gives. My hypothesis for the Kiwis, is that lube will be even less necessary (well, for feel, not sound at least).

Gotta agree with @Deadeye
I’m only considering buying these for the collection/color, so at least there’s an option for a smaller quantity

Lilacs! I almost picked some up, but . . . well, you know what supply has been like this year.

You know, I have been too rough on the T1s. They’re not as bad as I thought they would be. They have a kind of prickly, indistinct tactility outside of the stem itself, but the overall tactile bump is probably more rounded that Zealios.

I am kind of enjoying typing on my “Jade T1” test switches. These aren’t so bad, just more tactile than I need. It’s the stock sound that needs improving. I might pick up some of these Kiwis, even if they need modification. Of course, getting them is a toss-up, but I guess they’ll be back again.

Are they filmed? If not that extra tactility could be the loose ass tops. The leaves can be a little pingy as well which give an audible feedback that can be perceived as tactility.

I want to know how these feel compared to Invyr Holy Pandas. I’m stuck between those, Kiwis and T1s. Also would like to know the stem size.

I don’t think any switch comes factory filmed - they’re cheap though. You can buy 200 films for like $10.

None of my test switches are filmed, neither the Jade T1s or the T1ngerines.

I agree that loose tops and the loud leaves are increasing the perceived tactility. You’re right that they’re noisy. I’m sure the leaf is part of that.

In terms of feel, please keep in mind that my sample switches will be different from someone else’s.

I have some Holy Panda samples. They are assembled from genuine Halo True stems and YOK Trash Panda housings. I am using 68 gr springs and 63.5.

The Pandas feel like a large, top-mounted bump. But mine are lubed to soften and round that bump. It wants to be sharp, stark and abrupt. Mine are toned down. But it still feels kind of two-stage, going from high tactility to low tactility. You definitely notice that cliff. It slams right down to the bottom of the switch, thanks to the oversized stem.

This is a problem. I like the sound the stem produces in the housing, but it’s a pretty slammin bottom-out. I don’t think that would be good for ergonomic typing. They are fun switches, and resemble what you would imagine an older mechanical keyboard to be: a very definite tactile event that lets you know it has been actuated [switches to a mellower bottom, at least until you hit housing], a big noise when you hit bottom. It feels ‘blocky’ to me, like you’re clearing a big block when you first depress the switch.

With the T1s and mods, there are some similarities. The tactile event is towards the top. Like Pandas, this is not Cherry-style mid-way tactility. It’s a huuuge bump compared to light tactiles, kind of like the Panda. But where the Panda housing seems to simply enlarge whatever tactility is present in the stem, I would say the T1 housing has its own ‘extra’ tactility throughout, as the leaf makes its shape felt as you depress the switch. It feels ‘spicy’ in contrast to the Panda’s ‘vigorous’ tactility. But that’s based on limited testing.

I’ve only had both the Pandas and T1s for a few weeks. I have much more experience with Cherry-style tactiles, including Ergo Clears and now Everglide Jades, and also the lighter top-event switches like BOX Browns and Pro Purples.

I got T1s and they are super pingy…

Bumping this since we’re now less than an hour away from the first sale window (and 7 hours from the second).

Kiwi Switches go on sale on Tuesday, August 25 with two drops: one at 3pm ET and one at 9pm ET. You can participate in one drop only. Read our blog post for the full details about Kiwi Kuesday → About Kiwi Switches 67g Tactile with a T1 stem Lightly...

They have another drop later tonight I believe, GL on the 2nd chance!

Yeah, keeping my fingers crossed! Fortunately I’m mostly interested in 'em for the housings, so it’s not too big of a deal if I don’t manage to get them. Significantly more interested in the blackberry switches coming sometime down the road.

I couldn’t resist. Even had an alarm set. Ha!