I used Outemu Skys for so long and enjoyed them. Took a break, and now no matter what I do I can’t get them to where I want them too be. It could also be that using all these “panda” variants changed my preferences permanently.

What about board or layout tastes? I would love to hear everyone’s opinions.

used tactiles for so long, but now I can’t…#lineargang

When I first joined the hobby and I could count the amount of switch options with both hands, I liked clicky switches because mx browns felt bleh, mx clears could be difficult to obtain, and lube wasn’t a mainstream thing for linears yet. What a crazy time.

But changing tastes and opinions on different switches/keyboards over time is a good thing I think because it means you’re simply evolving and adjusting your own tastes and preferences to best suit who you are now, not who you were

@honey - I have been trying to give linears a try and just can’t get into them. However I have been going back to my Zeal V1s. These are a real treat! They are probably as linear as I am willing to get.

I think a lot of the hate for Browns was because everyone that bought them expected them to have a Cherry Clear type bump (at least I did). The don’t meet anyone’s expectation. Getting Clears was much more difficult and I remember a lot of the entry boards I looked at did not have them as an option.

yeah I was never a fan of linears before but there are so many options now that they are just so smooth. I started with Gateron milky yellows and now H1s and they’re just so smooooooth…

Some pretty basic stuff that’s probably true of a lot of keeb enthusiasts:

I used to like Cherry MX Blues and Browns a lot, and couldn’t decide which I preferred. I still vastly prefer either of them to a generic mush-mat, but after discovering plenty of more interesting options over the years, I don’t find them so novel.

I was firmly in the TKL camp for a couple years (despite never using the nav cluster - familiar comforts, I guess), but these days I almost never use anything bigger than 65%

Depending on what I’m up to, though, you might find a dedicated tenkey and/or macro pad alongside whatever compact layout I’m using. I rely on the nav keys quite a bit these days, too. At this point, my favorite layout is 65% with no blockers / 1u keys to the right of space. 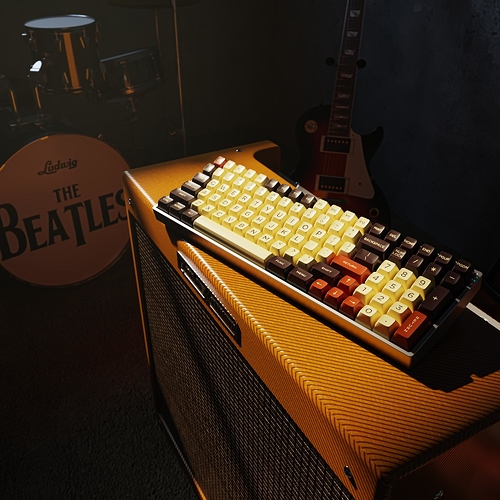 This render of SA 1965 on the then concept-stage Kira 96% is really what hooked me into the hobby proper. I still want to build that - so if anybody has the numpad kit for 1965 I’ve got all kinds of stuff to trade… Anyway - I’ve always been into layouts with no spaces between sections. A 96% might be a little harder for me to get used to and would likely spend most of its time sitting pretty on a shelf, but the 65% is just right for me to daily.

At first, I had no interest in linears whatsoever, and I really disliked the first silent switches I tried, but these days silent linears are probably my most oft-used type of switch.

I am in the same camp on the layouts. 60 or 65% seems to be my sweet spot. I have only recently adopted 60%; I find a modified tsangan layout to be pretty slick. I use a regular 2u Backspace and then a short right shift. This along with the bottom right mods produces a psuedo arrow key cluster. I never use right hand mods anyways.

Silent switches are becoming my main jam. I loved them for being quite at work, and love them even more now since I can type and not have to mute my mic in Zoom calls.

What are some boards you are using with the silenced switches?

I have been considering a TKL. However this is more to just show of caps than anything. Just getting anxious about not using half of my GMK sets.

I have a stacked acrylic Alice type board that is stuck in my downtown office. Been a real pain to get that back. It has silent Zeals V2.

I also have Brutal60 with the new Boba U4 stems in some switches. Really enjoying these. Super silent, although the silencing pads are so large they reduce the key travel some what. Think a silent Holy Panda. I have another board on the way that I want to use these switches for so I am trying to source some more silent switches. I have been using regular Zeals V1s again and liking them, so I might try and source some silent Zeal V1s to put in the Brutal60 as a replacement.

Yeah, I can understand that completely!

Changing tastes after experiencing a good bit of what’s available seems to be a fairly common thing in our community. I know I have personally went through it a few times as my tastes in switch type, plate material, mounting style, etc. have changed drastically since I started the hobby. Then there is also the wild card of new ideals too, even those of us who have found their preferences & have them set in stone can be affected by that.

For me when I first started the hobby it was all about tactile switches. I started on Cherry browns, managed to get my hands on a Pok3r with Cherry clears & it was off to the races. Although the uber tactile MX switches we have now just really don’t do it for me & made me take a long hard look at linear switches. Which since then have become my favs. Weighting preference is another thing that drastically changed for me since entering the hobby. At first I was all about heavy switches (80g bottom out +), now I’ve come just about all the way down the scale to really liking 63.5g progressive springs.

Yeah I’ve also hoped the Quefrency would be my endgame, what with the rotary encoder support and the macro pad, both promising to shift the workload to my healthier left hand, plus the split would allow a more neutral wrist posture.

After the initial flash, I’ve found the Quefrency’s split hard to get used to. My right hand already has a lower accuracy because it’s conditioned to jump between the home row and the arrows/nav cluster (history of TKL); with the moveable half it just seems to become worse to land on the right keys by feel.

Also I thought the 2 macro columns on the left would fit into my workflow better than it does. Partially also because my left hand still occasionally snaps to the “wrong left edge” (the right one being the gap between the macros and the left mods).

Yeah, lucky you. I got into this just as Zeal V1 was going out of production, so I never had the options to really test and purchase those switches.

But I’m glad that Brutal60 is working out, and the acrylic Alice. Sometimes I think about getting a PLA75 - the regular KBD75 can be made pretty quiet, and I figure the PLA material could lead to even better sound for the design.

What I really want to get with silent switches is the IKKI68 Aurora:
https://geekhack.org/index.php?topic=108636.0
If I can get it both quiet and portable, it would be great for the library. Or a KBD67 Lite.

I’m even thinking of using Bobas on an HMKB that’s coming. But I don’t expect the HMKB to be a quiet keyboard. The plan is to use a lot of dampening material.

I have my eye on the plastic gasket board too, the IKKI68 Aurora. I don’t need it, but that is a screaming deal. I might pick one or two up and build them for family members if I can get them to front me the money. It is a nice kit.

It is funny hearing you and @skepp mention this. I adapted to the Alice type layout pretty easily. I would think you could just force the Quefrency to roughly match the same angle.

I have looked at the Quefrency a number of times. The things holding me back are the lack of a more premium type case and I would like that extra B key. Using the Alice made me realize I hit this key with both hands on occasion.

All the innovation with linears these days have made me take a look at them. I still have not jumped on board though. I am excited to see lighter tactility switches coming back in to fashion. It gives me some new switches to look forward too.

Poor clickie boys have not had anything cool in some time.