Does anyone have a source for MX Whites that are in stock (besides MechanicalKeyboards)?

Tried to order them thru Amazon and they won’t ship to my address in the US. Weird.

The Arctos people have some.

The Arctos people have some.

Is there a reason you’re specifically looking for MX whites? Are you looking to build an entire keeb or just use them for mods? I think MX greens have relatively similar specs for higher availability (but I could be wrong)

It looks like some Taobao vendors (including KBDFans’s storefront) are selling them. (I assume you are looking for “milky” whites, as opposed to “nature” whites.)

Is there a reason you’re specifically looking for MX whites?

I had read a description which described them as sounding with a thud like a heavy car door when pressed. And I liked the heavy actuation force. Just didn’t realize they were so difficult to source. Waiting on a custom cut acrylic 4X4 macropad to arrive and so I only needed to order 30…some for the pad and some for backups for my handwired board. Just ordered Zealios purple switches…hopefully I like them.

Any favorite vendors you have for switches?

(I assume you are looking for “milky” whites, as opposed to “nature” whites.)

I don’t know. Until you asked I didn’t realize there were two versions or that MX Whites were so HARD to get. Looking for a switch that could be as close as possible to the sound and feel to my Model M. That would be great. For now I ordered some Zealios purple.

My understanding is that the Milky Whites are similar to a Cherry MX Green, but with a softer click, and that the Nature Whites are linear.

This is the first time I’ve sourced switches. My handwired keyboard was a TKL that I stripped and then wired with a Teensy. Never would have thought picking and sourcing switches would be so time consuming. Any favorite vendors you use for switches?

Any favorite vendors you use for switches?

NovelKeys has been where I’ve got pretty much everything except Zealios.

I live in Asia, so I typically buy all my switches through Taobao vendors, including through GKESports and KBDFans. Both are reliable vendors.

I also buy from the following Taobao vendors with some frequency:

If your goal is to approximate the sound and feel of buckling springs in a MX-style switch, you might consider Kailh Box clicky switches, particularly the Box Jades and Box Navies, which are available through Novelkeys and KBDFans.

If your goal is to approximate the sound and feel of buckling springs in a MX-style switch, you might consider Kailh Box clicky switches, particularly the Box Jades and Box Navies, which are available through Novelkeys and KBDFans.

Thanks @RogerArbogast for all the info especially the Box tip. I appreciate it. By the way do the Box switches make it more difficult to find key caps?

You are very welcome.

By the way do the Box switches make it more difficult to find key caps?

No, they all use the same MX-style keycaps.

No, they all use the same MX-style keycaps.

Why not mechanical keyboards.com if you’re I the US? They come down to around 50 cent a switch if you order 100, plus free shipping in the US. Also they are the only place I know that still stocks them. Even Reichelt doesn’t have them in stock.

Why not mechanical keyboards.com if you’re I the US?

I had read a description which described them as sounding with a thud like a heavy car door when pressed.

The first mechanical keyboard I bought when I was easing into this hobby, was a Ducky One TKL with Cherry MX Whites. Out of the six switches (all Cherry) in my initial switch tester, the one I preferred best was the Cherry MX White. Ducky was the only manufacturer I could find that had MX White as a switch option.

I was very pleased.

I would never describe the sound as a thud like a heavy car door, though. It feels like a MX Green, but with a muted click. MX Whites don’t get a lot of love from the hobbyist community. I think I’ve seen maybe one build at the meetups I go to with them. They have a reputation for being “inconsistent” whatever that means.

For what it’s worth, the switches in my pre-built all feel and sound the same to me, but I’m not exactly a picky guy.

Caveats: the same switches can sound wildly different depending on the board, the build, and the caps. Sound and resonance damping is not quite a dark art, but you’ll see several threads here in KeebTalk discussing different solutions, all of which have various effectiveness, all of which are an attempt to fine tune the sound and feel. Good luck!

Now you’ve peaked my interest with the Navy being heavier than the Model M. When I type it’s more like Fred Flintstone pounding away so I like a heavier switch. Plus I really like the feel of the Model M and the closer I can get to that the better. Beam Spring is a new term…I’ll have to look that up.

Edit: Just watched a video on an IBM 5251 keyboard with Beamsprings…very cool.

@RogerArbogast mentioned two versions of the MX White…“milky” and “nature”. Do you happen to remember which your board came with? Also @noteveneric mentioned Whites are close to Greens. Have you ever used Greens?

I believe that the MX White was called “milk” in the Asian market. I have seen these switches advertised here in the States as “Cherry MX White (Milk)” in order to differentiate them from the Natural White.

I have tried boards built with MX Greens, yes. Although I like the feel, the sound really sets my teeth on edge. I would recommend you get a switch tester with a variety of clicky switches, or better yet, attend a meetup in your area.

I have a Model M. I don’t own a Model F or a IBM Beam Spring board. My experience with those came from others who brought them to meetups. There aren’t a lot of Beam Spring boards floating around out there, but the action is widely regarded as being top-of-the-line, even though the boards themselves are massive, heavy, and tall. They’re rare beasts, built as terminals for mainframes. What surprised me, I guess, was just how light the switches felt.

Anyway, try before you buy. I think you’d really love Kailh Box Navy, but I’m not you, and for that you can be grateful. LOL 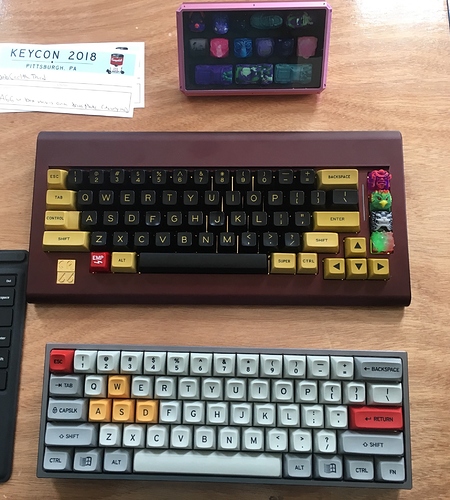