Soo, tomorrow is the day. I think I’m gonna get me one.
But what are your opinions about it?

So my plan is to build me a BoW keeb next year so I’m on the hunt for a E-white case with black accents.
I totally missed out on the Primus, the AKI-S seems to be impossible to join the GB and the Noah just gives me red flags.

Do you know if there is a 75% I should place my money on instead?

The original was pretty well liked iirc, it’s a solid looking board and it looks like they’ve put in work to improve it.

Yeah I know. I really like the nautical theme to.

It’s probably cuz I struck out on the Primus that this feels like a condolenc price.

And on top of that it’s going to be the first time I spend 600$ on a single(+add on’s) keeb item that makes me a bit hesitant.

Yeah, saw Primus in the body and my brain glitched

Great colorways, a nice looking PC option, gasket mount, sweet FR plate, badge options, good LED underglow and LED badge lighting, and a nice (at least to me) design. It’s a pretty solid board, but it’s for sure spendy. $349 to $379 plus $70 shipping thanks to those increased DHL shipping prices. Plus, Graystudios has been improving their customer service and updates. They have done a great job with the Space65 Cybervoyager group buy.

The board has great features and colorway options. The only reason I won’t be participating in the GB is because I’m not a fan of the aesthetics.

The gear light bulb just reminds me of typical “design thinking” and “innovation” stock photography/vectors. The gear theme is also still present near the USB port on the complete nautical theme version. The board looks much better from production photos and streams, but I’ve learned that there are always great boards coming. Don’t give too much into FOMO unless the feature set and aesthetics really speaks to your personal tastes.

Let’s see if I can stick to my 5 planed purchase until it arrives. 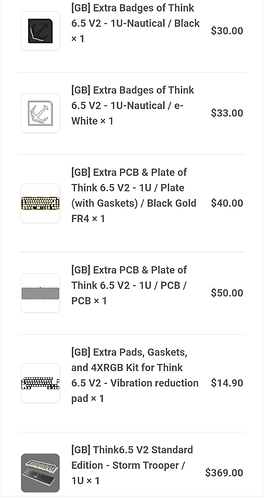 Nice dude, that’s gonna be a sick board!! Do you have a plan how you’re gonna build it?

So I just need to find some white stabs.

And yes, I have a color OCD.

I personally went with the Schrodinger option to try to gain some inspiration for a build. Really love that those options will have more fun options from their designer rather than the already pretty stunning default options. It is the first time I’m buying a soldering board but plan on getting some practice/help before it eventually ships.

While I agree the base aesthetics are definitely preference based, I think the value of the board speaks for itself, and it doesn’t feel like it is priced wildly over it’s value, especially considering how much they resell for if you grow tired of it eventually and want to swap for something new.

I was considering holding out for the next Dixie Mech board to drop but wanted to get an order in sooner than later especially considering the unlimited group buy. I think in the end I’ll build this one out, and then potentially use it for a really nice gift at some point.

Yeah, the Schrodinger is a nice wildcard, with the space65 cybervoyager they teased one I really wanted.
https://www.keebtalk.com/t/gb-space65-cybervoyager-65-custom-keyboard/8564/12?u=isoxswap

Grab some white C3 stabs from TKC when they restock next.