Do you have a build that is flawed but lovable?

Nothing in life is perfect. What’s wrong with your build, and why do you still love it? Do you use it, or is it just a part of the collection?

I have an AEK64build with matias quiet linear swithes. They sound like rattley shit despite their moniker, and the slight bottom out tactility is odd. The spacebar is from a small run with SP, but it has to use the adapters; it’s ghetto rigged with small orings because the stablizers can bottom out before the switch. I have tons of cleaner, better builds…Yet I still love how these switches feel, and the AEK64 case with the JP AEK II caps is fantastic to see.

Or how about my Revo One with fosen aquamarines? I don’t particularly care for how they sound or feel, but aquamarines are practically extinct at this point. It’s a valued part of the collection. 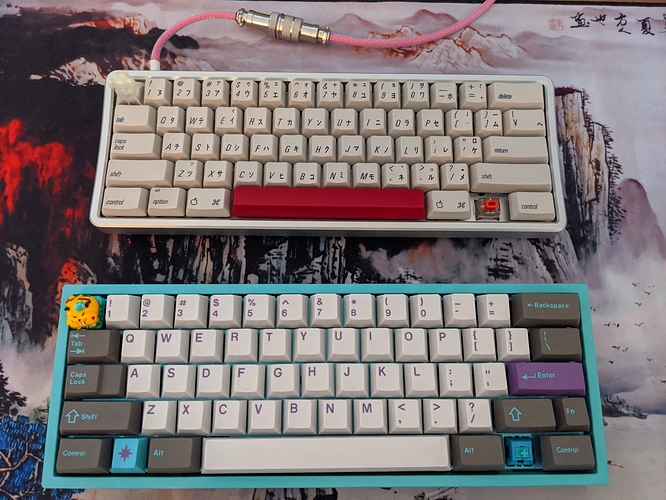 btw, I actually think the AEK64 looks really cool. The red sb is a great touch. Did you lube the stems, springs and stabs?

Ha, I second that. This is the first one that comes to mind for me: 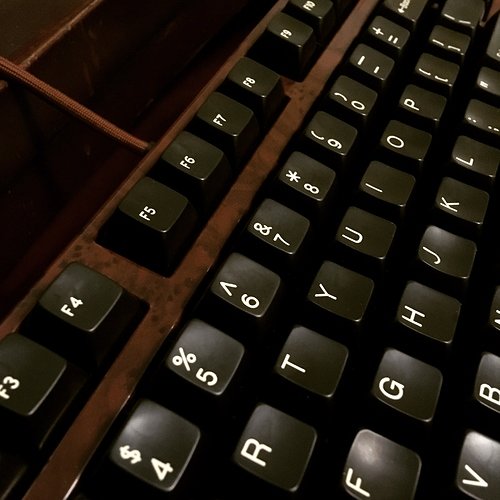 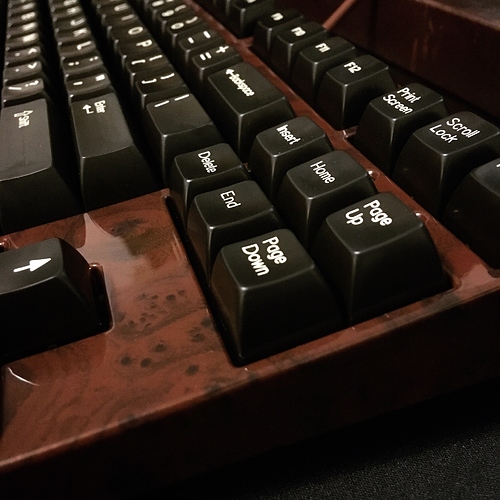 Brown is definitely the theme here. 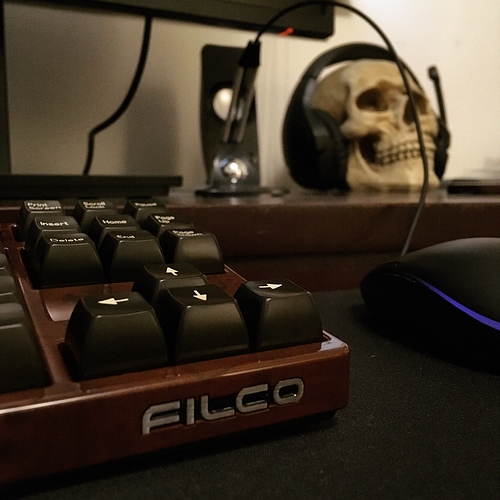 The MX browns here are surprisingly satisfying to use with its thin ABS stock caps, but a lot more visually striking with these: Signature Plastic’s SA FIlco in “black” which is more of a dark-chocolate color.

They are super thicc, and I think they look fantastic with the Kobo lacquered case (in “classic brown”), but they do look a bit tall to me - and more importantly, I don’t enjoy typing on them nearly as much.

As my best looking and probably worst feeling complete keyboard, for now the MJ2 is a shelf piece. If I can get my hands on a set of JTK Beige on Brown (and the patience to swap the Cherries for Kailh Boxes)… we’ll see.

Hey, yeah wow that really is a killer combo!

Stabs are lubed. Lubing alps scares me. lol Everytime I have tried pulling one apart I haven’t been able to put it back together. Matias quiet linears are super smooth out of the box though.

Beautiful Filco @Deadeye! I forgot the Kobo MJ2 even existed. Really ahead of its time IMO. It definitely deserves an update!

Yeah they can be finicky but once you get the hang of it it’s pretty easy. Lubing it will make them sound ten times better. Have you seen chyrosrann22s vids on alps switches? Might help.

I build my canoe with holy panda switches, the canoe has a very stiff plate that makes it very harsh to type (and I also just find holy pandas too tactile for me). It’s really too much for me, so it’s pretty much relegated to being a great looking keyboard on my shelf until I get around to rebuilding it, and maybe finding plate files to get something softer.

This is my all time flawed but also all time lovable board. This is the WASD Code keyboard. It was my very first mech and came with MX blues. I loved this thing and thought it was the absolute shit, that is until I discovered other switches

Honestly, if I had just stopped there, I would have kept on typing in blissful ignorance thinking my full sized plastic keyboard with MX blues was the only and last keyboard I would ever need. BUT, it didn’t go that way. Oh no, it did not go that way. After spending 3 months binging every keyboard video that was ever made, I emerged out of my cave and began desoldering this puppy. I made some zealiostotles and put them in but… I wrecked my PCB. A few YouTube tutorials and some switch bridges later and I had fixed it only to find that 62g springs were not enough to make the switches work and half my keys didn’t return. I swapped in 67s but it’s to heavy for clickys and feels no bueno.

I still get it out once in a while but it, (and honestly every board since) somehow feels not quite as good as the feeling I had the first time I typed on her stock. In another universe, there is a man happily typing away on a plastic rig filled with rattly AF mx blues. In a way, I envy that man and his goddamned blissful ignorance. Curse you, you young dumb sonovabitch.

But, its story is not over. I’m for sure going to get some phoenix switches in it that will work fine with 62g springs and get one of those badass metal cases on it. She will be mine. Oh yes, she will be mine. 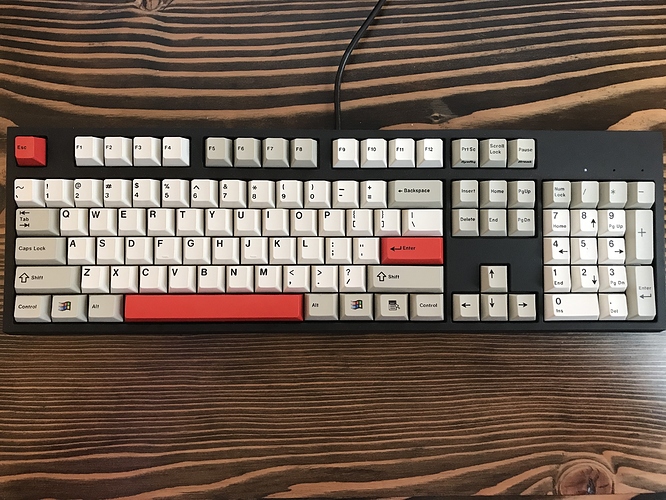 P.S. Hey, at least I was kicking ass with GMKs on my first board right?

My E8-V1 board is nice, but certainly has issues. The diffusers on the underneath sides weren’t fully thought through. So when you lift the board in that area, the diffusers move inward. Easily fixed with double-stick tape when I built it 3 years ago. No one would ever know, but I know it

Also, the badge at the top was totally jank. The custom engraving was done after the anodization, so it’s just white and not the color of the badge. The custom lettering was done on top of the default badge, so you can see it says Exclusive E8-V1 underneath. Fortunately, you can’t see it from very far away. Oh, and I had to secure my badge with double stick tape on the underside b/c the screw threads are too large for m2 and too small for m3.

But it still looks cool, and it’s the one of my fist boards with zealios v1s. Still use it ever now and then.
And the unique layout is nifty.

This was a big f-up of a group buy that moved through two people before all communication just fell through. So I guess I’m lucky to have the board at all.

I have two “flawed” boards. 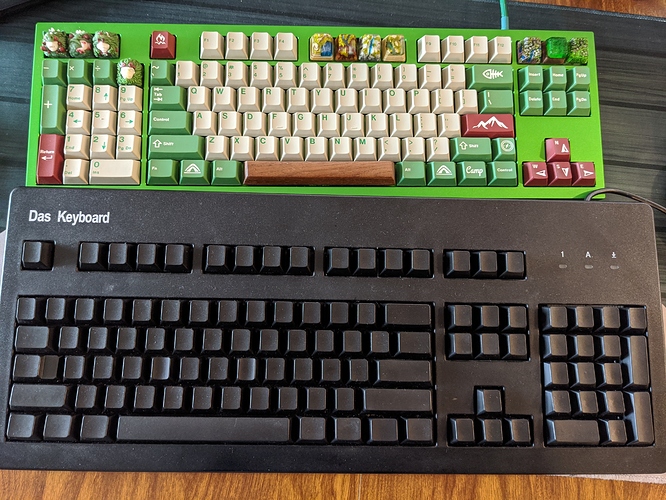 On the top one, my southpaw, the stabilizer wire on the main enter key isn’t connected at all. I don’t really notice it unless I’m intentionally pressing on the sides of the key to demonstrate the issue, but desoldering the whole board to fix it on on my to-do list nonetheless. It also has a handful of scratches on the inside of the case, one above the print screen key that you can barely see if you zoom all the way in, and a slightly dented bottom corner. I could have waited another year+ to get a flawless board (the GB has been a disaster), but I’m not nitpicky enough to care about that. The lube job I did on the switches is also … bad? It’s pretty inconsistent as a few of the keys have a slightly different sound (which TBH I like enough that I wish I knew what I did “wrong” to get them like that).

The bottom board is one a personal friend sold to me. An original Das II Cherry G80-3000 with blank POM keycaps… Except for the menu key. It’s hard to see at the angle of this photo, but that one has actually been swapped out with a thin, OEM-profile ABS keycap. I have no idea what happened to the original one, and I’m not about to spend >$100 on a Cherry POM keyset to replace that one cap. Also, there’s a very unfortunate scratch running through the logo. Das Keyboard

Also, the badge at the top was totally jank. The custom engraving was done after the anodization, so it’s just white and not the color of the badge. The custom lettering was done on top of the default badge, so you can see it says Exclusive E8-V1 underneath. Fortunately, you can’t see it from very far away. Oh, and I had to secure my badge with double stick tape on the underside b/c the screw threads are too large for m2 and too small for m3.

I’d have to say my RedscarfII+ ver.C after it’s last rebuild. It’s a stiff bastard that has no give & is super outdated now, but it was one of my first customs & the last rebuild made it my first HP board. So I still love the thing despite not using it so much anymore.

I made a garbage build that turned out to be one of my favorites. Cheapo XD60 R3 PCB, B-Stock brass plate from 1Up Keyboards, and a cheap wood case and caps from Drop Closet.

The cheap, thin as paper Tai Hao ABS OEM keycaps were supposed to be placeholders and I ended up loving how they looked and sounded on this particular board.

The caps were literally like $12 in the last Drop Closet event. I am still debating if I am going to pull them off to put on GMK Wasabi, or if I should make a whole new build for Wasabi. 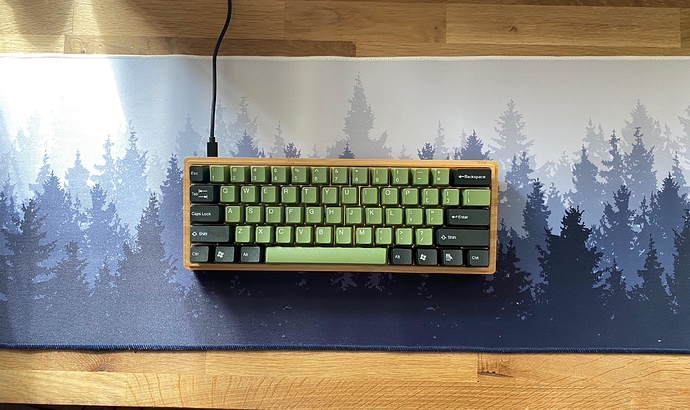 Mine would be the Doro67. The GB was flawed although maybe everyone eventually got their money back who didn’t get their board? I dunno. I was lucky to get mine especially considering I bought a GB spot off of someone who originally joined. I got just the grey anodized case but those who got a polished bottom case got a super dirty and not at all polishable bottom case. Again, super lucky. The area I wasn’t as lucky is that my per-key RGB didn’t work. Some LEDs were stuck a certain colour. Some had it worse where whole rows wouldn’t even light up. Again somehow I got lucky and after flashing Merlin’s VIA firmware it just out of the blue started working properly and no LEDs were stuck!
Another issue was broken daughter-boards. Again no problem on my end.
I built mine with Healios and cutout plate and case foam. It sounds and feels excellent and works like a charm. I’ve probably ruined my luck with this post but fortunately Maarten is making a replacement PCB.

I love thicc-boi caps as much as the next person, but there is definitely a time and place for extra-thin caps as well. I have an old Filco with Cherry browns that I put some SA caps on, and it doesn’t feel half as good as it did with the stock caps on, which are about as thin as Tai-Haos without being double-shot.

Bold perspective. The only caps I preferred to aftermarkets were the caps on the SteelSeries Apex Pro

At least for me, it depends a lot on the rest of the build.

For example, the thin caps bring out the mild tactility of the Cherry browns on that Filco - whereas the heavy SA caps all but obliterate it.

By the same token, those thin caps would probably sound and feel kind of harsh when paired with something like a BOX navy, and also tend to amplify rattly stabs or switches.

My username was inspired by this das keyboard! …I’ve never owned a Das though. lol I really want a Das II, but I can never find one.

After all the perfect board pics + typing sounds on r/mk, it’s nice to see that I’m not the only one that’s like “eh good enough” lol

Part of me keeps wondering if I should grab that foam MKUltra has for the high-profile CTRL and see if I can make it work for the K-Type, part of me worries it may just be a lost cause.