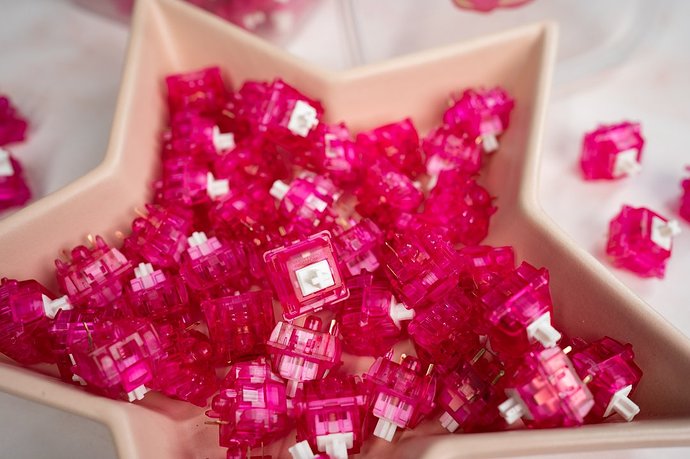 One drop started this afternoon, another happening this evening - you can find them here:

Dragon Fruit switches are a tactile switch with a 63.5g spring, featuring a translucent pink housing and snow white stem. These switches are sold in packs of 25 switches. 1 unit = 25 switches. You can buy a maximum of 8 units (i.e. 200 switches)....

The Dragon Fruits are supposed to be top-bump tactiles with a bump less big, round, and heavy when compared to a Kiwi. Here’s a link to a stream archive casually covering the switches:

I have the Banana Splits (lubed) on my dessert board. I’m a fan.

got some dragon fruit switches in today. Meh. Not a very interesting switch. Lots of stem wobble. Very loud contact leaf ping. Slightly more tactile than an MX brown. Not a fan of the spring. Feels dead and too light to me. Might put a linear stem in them and spring swap. The housing is a really cool color.

I think if you were a fan of zealios V1s, you might get these to work for you. I’m kinda spoiled by the new tactiles like the U4 Thocks, JWK Lilacs, Holy Bobas, and Gateron Kangaroos. These feel like a step in the wrong direction. They feel unrefined to me.

The bump is just a tad to short, too weak, and that contact leaf noise… it’s bad.

I’ll do my best to use them for a week or so. Maybe the story will change in the right board or with the right keycaps.

I have been reading a lot about Penguin switches lately. These were supposed to kind of be the competitor? Or a similar switch that came out at the same time.

I have to agree - stock, the Dragon Fruits aren’t nearly as good as Kiwis or Tangerines. I’ve found them pretty good for frankenswitching so far, though. If you happen to like extra short travel, putting a Halo stems in them makes them a totally different experience.

Well these reviews certainly aren’t promising for a 65c switch

Oh, and I forgot to mention that the leafs push out easily, so be careful if you open them up.

So I’ve got both of these on hand and I’d say from a very limited time playing around with them that the penguins are the better option.

Both switches have some pinging (at least stock) but I suspect that can mostly be cleaned up with some spring swapping and lube work (on both).

The Dragonfruit seems a tiiiiiny bit smoother stock than the Penguin but frankly they’re both UHMWPE-blend housings that will feel nice and smooth with a little lube so I don’t particularly think it matters that one is minorly smoother than the other out of the box (at least not for anybody who’s going to read my blathering). This could also just be due to differences in factory lube application, or that I’ve opened the Penguin switch before!

The stems appear to be nearly identical, which is actually a little bit odd considering they have mold markings in completely different spots.

(in both photos, left is Penguin, right is Dragonfruit) 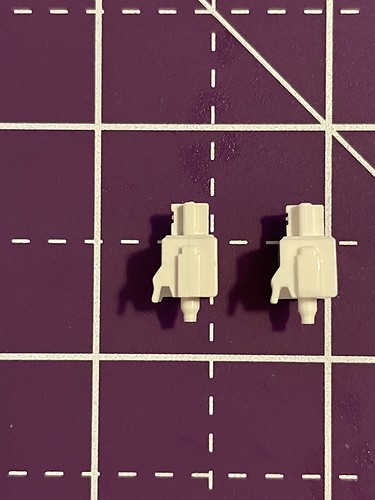 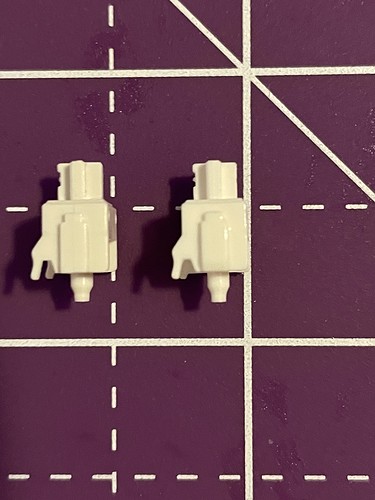 But, as @pixelpusher mentions: boy howdy those Dragonfruit wobble. The N/S wobble of both is fairly expected, but the E/W wobble on the Dragonfruits is notably higher than that of the Penguin (which is almost as good as I’ve seen in a stock switch on this metric).

The housing is a real nice color on the Dragonfruits, though, and if the leaf ping is mitigable I could see it being a great frankenswitch housing.

The stems appear to be nearly identical, which is actually a little bit odd considering they have mold markings in completely different spots.

Well that’s fascinating… they’re clearly made by different tools, but I have to agree, that bump looks basically identical.

forgot to mention that the leafs push out easily

Can confirm. Almost damaged a switch because I didn’t notice this until I was about to put the top housing back on.

The housing is a real nice color on the Dragonfruits, though, and if the leaf ping is mitigable I could see it being a great frankenswitch housing.

This bears-out in my testing so far; once the rattly lightweight spring and iffy stem are out of there (or once the spring is drowning in lube), the loose-ish leaf doesn’t seem to make too much sound.

What about a U4T stem?

Awesome work! I just hope it doesn’t have the return hitch that Penguins do.

How are those Lilacs?

I think I have 1 sample [purply-stem in a black housing]. Feels like a T1.

It’s my understanding that these are just T1 stems in a different housing?

They’re not RARA stems, according to the reviews of RARA.

to me the bump is slightly more subtle than a T1. Maybe it’s just the spring, but I like them more. For some reason I really like them with SA caps

Okay, I finally put a Lilac tactile in hotswap.

It’s a little smoother than a stock Kiwi [T1], but the noise is harsh. It’s going to need lubing/re-lubing just for noise alone.

I could use these for typing, although the tactility is a little higher than necessary.

I also tried the purple SP Star. It was surprisingly maybe the most tactile of the three, with a steep dropoff or harsh tactile event. Not sure if these receive much factory lube.

Yeah they are noisy. I put 3204 everywhere but the tactile legs and filmed them. I don’t know why I like these so much but I do. I have them in my Modern M0110 with MT3 caps and it feels and sounds authentically vintage. I could easily fool someone into thinking it was some sort of Alps board

It does function well with MT3, like a proper medium-tactile keyboard.

It sounds better with ABS than PBT MT3 so far, which is a rarity.

So thanks for finding a use for ABS MT3! [Sounded awful with the PBT unfortunately, would definitely need lubing, but I could maybe use it ‘stock’ with the ABS.]

Slightly off topic follow up, I’m going to try the U4T stems I just got with some Tangerine housings pretty soon. I’ll report back when I do.

I finally got around to trying both U4 stems in a fruit housing (Dragon Fruit in this case).

The silent U4’s feel good and operate normally; maybe less snappy than an Ink housing but still very satisfying. I’d imagine the bump would be a little more mild in a Tangerine housing vs the DF because of the leaf.

The U4T stem is very snappy and has a super short travel - even more so than with Halo stems on both counts. I’m interested to see what you think of it - the short travel is taking some getting used to but seems more viable to me than a linear “speed” switch for typing.

Just put a U4T stem in a lubed Tangerine, and the travel was so short, the switch was basically stuck in the down / activated state. Felt cool, but completely unusable for me.