It’s no secret for most who have been in the community for some time that well liked linear switches will inevitably become recolored.

The first big wave of recolored switches were from Gateron and it was very similar to the wave of JWK switches we see today. They’re all basically the same with maybe a spring change, and different options for top and bottom housings.

Throughout your keyboard adventure, were there are particular switch recolors you liked more because of aesthetics or spring, or liked less because it looked so fugly (or you didn’t like the sound)?

My least favorite recolor would probably be the Tangerine R1s since they were just so unexciting.

My favorite recolor so far would probably be one of the options that feature an opaque nylon bottom with a milky top housing. I’ve usually had good experiences with those (once lubed of course).

How about you? I haven’t really hopped on the JWK recolor train, but it looks like so many people have!

My favorites are Fei Matchas. The switch is nothing special, just a fairly standard Gateron linear, but the colors are nearly perfectly matched to GMK Camping. I bought a batch long before I got into linears, and quite a while before I actually put them on a board, but I’m really glad I did. It’s too bad they aren’t being made anymore since I really need to redo my awful lube job 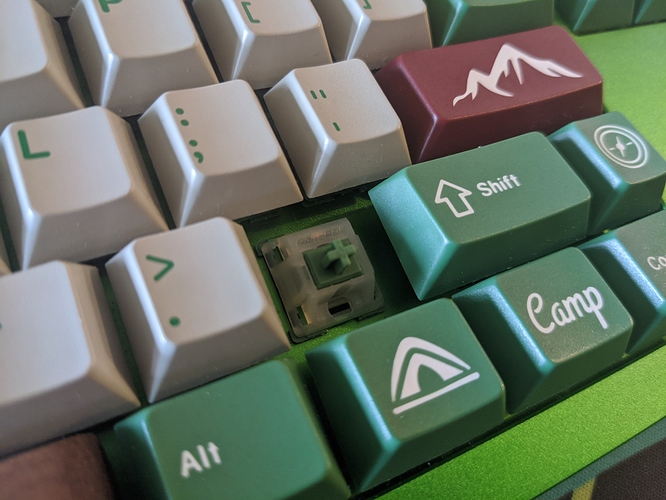 I wouldn’t really say I have a least favorite but the one that really just makes me wonder why would definitely have to be the IKEA colored ones. Just… why?

ETA: I just remembered that it’s actually supposed to be the colors of the Swedish flag (where IKEA got their colors from I assume) but they’re still kinda ugly imo.

My least favorite recolor would probably be the Tangerine R1s since they were just so unexciting.

My favorite recolor so far would probably be one of the options that feature an opaque nylon bottom with a milky top housing.

My favorite is probably the turquoise tealios because the turquoise color is kinda nice and I like colored clear plastic, but tbh I don’t really care what color the switches are.

I’ve tried to get interested in some of the recolored versions, or the idea of coordinating switch color with case or keycap color, but honestly it seems like a waste of time considering that you can’t see them at all while the board is in use

Agreed, really love my Machas. While, like you said, it’s not anything special or overhyped just a really solid, smooth linear once you lube and film it. Although, I’m not sure it needs the films. Just got some Gat Merlots as well, which feels pretty similar and I’m enjoying them too.

I’ll jump on the Gateron Cream hate train, they look just strange & there definitely will be some confusion between them & NK Creams. Favorite recolor right now would be Gat Merlots, much like the Matchas they’re nothing super special, but they are a very solid linear switch when properly lubed & filmed. Also the colors are on point IMO, that white housing with the deep red stem just looks great to me!

Don’t necessarily have a least favorite since I like every switch’s design, but my favorite definitely has to be the all-turquoise Tealios V2, they look so much more luxury than the regulars, especially since I’m a user of the regular, transparent/clear housed Tealios.

The all-turquoise look like genuine gemstones and it’s so nice, even more fitting when you remember that the pantone/color is literally taken from Tiffany & Co.'s tiffany blue.

Is it bad that I vibe with these? They look really cute.

I really like the look of the Pinoko v2s and the Okomochis. The all pink opaque housing just really gets me. In general, i really like the transparent colored housings such as the Turqoise Tealios, Ink Blues, and Tangerines V2. I know that they’re just recolors but the recolors that Gateron has come out with are really nice.

I really don’t like the TTC Gold Brown Switches and the Box Burnt Oranges. I don’t really hate the color orange but burnt orange is not even that orange. It reminds me when you get the 100 crayola crayons and you get a red orange crayon and another orange red crayon.

I don’t really like the combo of the TTC Gold Brown Switches; the brown stem and the orange bottom housing are ok but i don’t like the clear top housing. I wish it was just the same throughout.

I don’t really like the combo of the TTC Gold Brown Switches; the brown stem and the orange bottom housing are ok but i don’t like the clear top housing. I wish it was just the same throughout.

The original TTC gold switches were all orange, slider & all on all of them. The housings feel really cheap though & the quality is definitely lacking with the V1 golds.