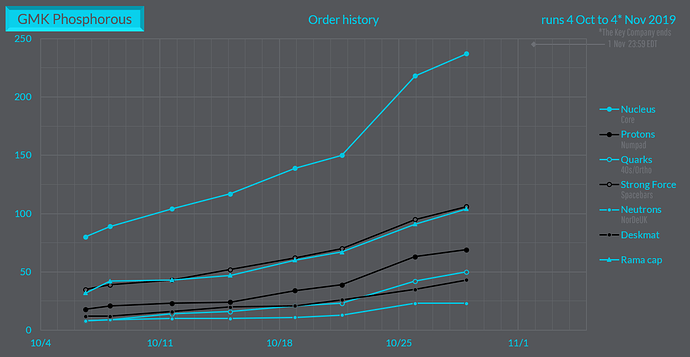 MOQ has been achieved. All kits should be made. 2 days left! Let’s do this!

I would like to thank you all for all the support and help — this couldn’t have happened without you!

We’re currently at 300 (or slightly over) base kits sold (MOQ reached!) and all child kits will be made, even if they haven’t hit MOQ.

We’re in the last 24 hours or so, so don’t be late in getting your order in! Child (kit) support very very welcome!

Great work with the GB!!

Numbers (updated but not yet final)

nice numbers, man. I ended up picking a few kits up at the last minute. I’m way over budget for keycaps at the moment, but these colors are my absolute favorite together.

At this point I think we’re all over budget! And November won’t make this easier.

I’ll have to ASCII someone for a loan at this rate! 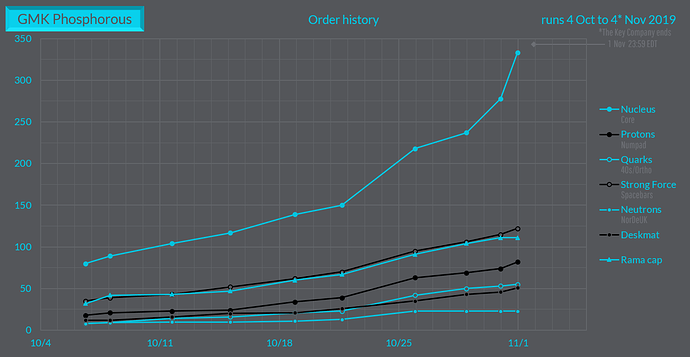 I missed this by mere minutes!

If you’re in the EU I think MyKeyboard is still open. USA is closed already. 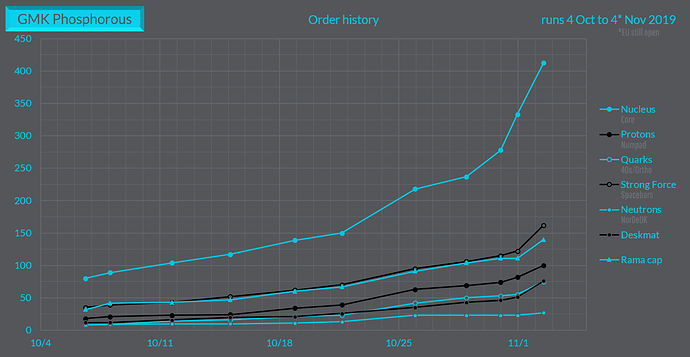 Since I have finally got back after a week or so of travel, I wanted to write down a few thoughts after my first GMK group buy.

Firstly, I would like to thank each of you, including the vendors of course, for all your support and help along the way. The road to GB stage was steep and full of traps, and I fell into one or two. I’d like to think I learned a lot and will hopefully be able to activate this knowledge during the upcoming GMK Lunar IC and GB stage.

Secondly, the group buy stage was probably one of the most stressful events I have ever had. With no experience as to how sales go, you might have noticed that I was freaking out a bit along the way (yes, I’m putting it mildly). This ultimately led to about a week of being basically unable to get any meaningful sleep, with all my dreams being filled by keyboard and keycap stuff. Keeping motivated and staying positive wasn’t easy, especially since my first group buy was surrounded by 8 other wonderful sets, including GMK Firefly, GMK Coral, and GMK Café (the 3 that struck my fancy most). And then there was GMK Dracula, which took off faster than the Millennium Falcon doing the Kessel Run in 12 parsecs. That was quite intimidating.

The people who read the “history” part of the first IC and GB posts know that I have a RAMA M60-A Moon Stealth on the way (hopefully shipping soon!) — my first RAMA, my first HHKB, my first inspiration — which was the spark to design GMK Phosphorous. Obviously my biggest dream was for this set to get made for the most selfish reason possible — I wanted it ON MY M60-A! So I’d like to take this opportunity to thank you all for making this dream come true!

I always wanted to ask…in the renders, the Rama board has text that lights up on the back of the keyboard. Is that real or is that part of the render?

Real. Phosphor-filled enamel. Will glow in the dark.

Just looked it up: Apparently, it’s the Moon Stealth one