[GB] the Heavy Grail, a Norbauer housing for the HHKB

AH! That makes so much more sense, it was hard for me to visualize but that explanation is perfect, thank you. I think my Heavy Grail plate is too precious for me, think I’ll stick with the stock keyset for now then.

I bought a HG GoCF last week, it came with Novatouch sliders (except for the spacebar), but the plate hasn’t been drilled. So I’m considering if I should switch to stock sliders/keyset or drill the plate?

Would be great to hear other peoples experiences.

I have a question: When removing the rubber/poron gasket from its sheet, the rest of the sheet contains 18 screw gaskets. Since there are 18 screws in the PCB, I assume they’re meant to be used there, but I can’t recall having seen/read anything about them. What are their purpose? In case the screws still have a gap between them and the PCB after tightening them? Because I have had issues with that in the past.

Edit: Oh, I found a discussion about it now: [GB] the Heavy Grail, a Norbauer housing for the HHKB - #408 by norbauer. So then I guess my follow-up question is whether anyone has installed them, and if they recommend it?

I did not install them

Yeah, I guess it’s not too common.

To be clear, when I say I’ve had “issues” with tightening the screws, I think that’s mostly my own fault - Ryan put so much emphasis on exactly how much the screws should be tightened in his assembly video that I got scared of over-tightening them, since they’re self-threading. After building two HGs, I can confidently say that I didn’t tighten them enough in my first build, and that this caused a harsh, hard bottom-out sound on some keys (presumably from the loose PCB flexing and hitting the screwhead?). So I went over and tightened all the screws, which helped tremendously, but a couple of the screws don’t tighten completely, so I was wondering if I should try to put a washer gasket on those.

My understanding is that the washer gaskets are for securing the integrated slider housing plate to the chassis (around the perimeter of the plate), not the PCB to the plate. That way it can be burger mounted with the large gasket between the plate and the chassis, and the smaller gaskets between the heads of the screws and the plate.

I’ve used them on two of my Heavy Grails, and cannot discern a difference over the ones I didn’t use them on.

Those little washer gaskets were just something to include for fun since we had that waste area in the center of the switch plate gasket. They’re rather fiddly to install and don’t seem to make an obvious difference, so I generally recommend that people ignore them. To avoid confusion, I’ve actually omitted them on the last batch of gaskets.

Finally got around to finishing my build after procrastinating on it forever mostly because I’m totally new to topre and this being my most expensive keyboard purchase ever, was a little anxious about messing it up. The only hiccup I had was with one of the screw’s hex heads being stripped so had to get my friend to help me get that out with some of his tools. Modded it with deskeys purple domes, silencing rings and sliders. I was lucky and spotted GMK Beta extras and was able to get in on that and then I got even luckier and was able to secure a spare 6U GMK 9009 spacebar from @AdrianMan so huge props to him for helping me out with that and with his instructions for doing a stem transplant to get a centered stem. I am very happy with the outcome of this build. 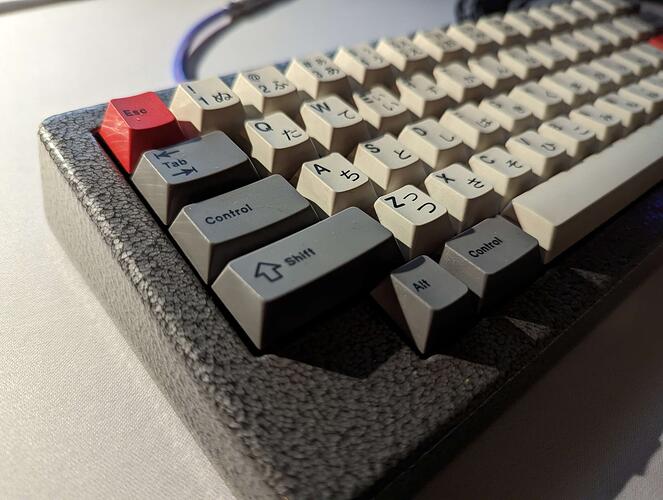 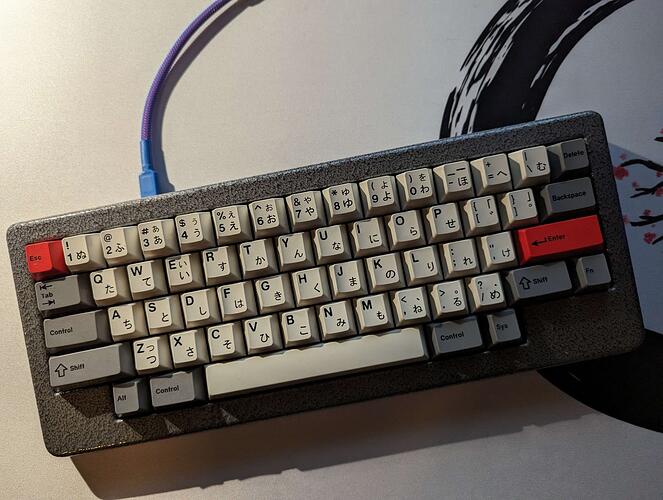 Looks amazing! Did you have any issues with deskeys sliders in the heavy grail?

No big issues with the deskeys sliders. The only thing I have noticed is that some of the sound is inconsistent from key to key. Whether that comes from the switchplate or the sliders or just me, I do not know. But everything works great as far as I can tell. I had to exercise a little ingenuity when it came down to muting the stabilizers - also from deskeys. For the left shift and enter keys I was inspired by the old bandaid mods we used to do for old stabs so I cut some small squares from the bandaids and applied them to the tops of the stabilizers and added the tiniest amount of g205 on top. I also used the hand drill from deskeys for holes to allow the left shift and enter keys to be pressed through and it worked great, if not somewhat of a pain and slow and anxiety inducing process.

Wow that turned out awesome ! Glad I could help out !

Got the HG in tactical black delivered today and just finished the build - I love everything about it! Thanks for the well made product!