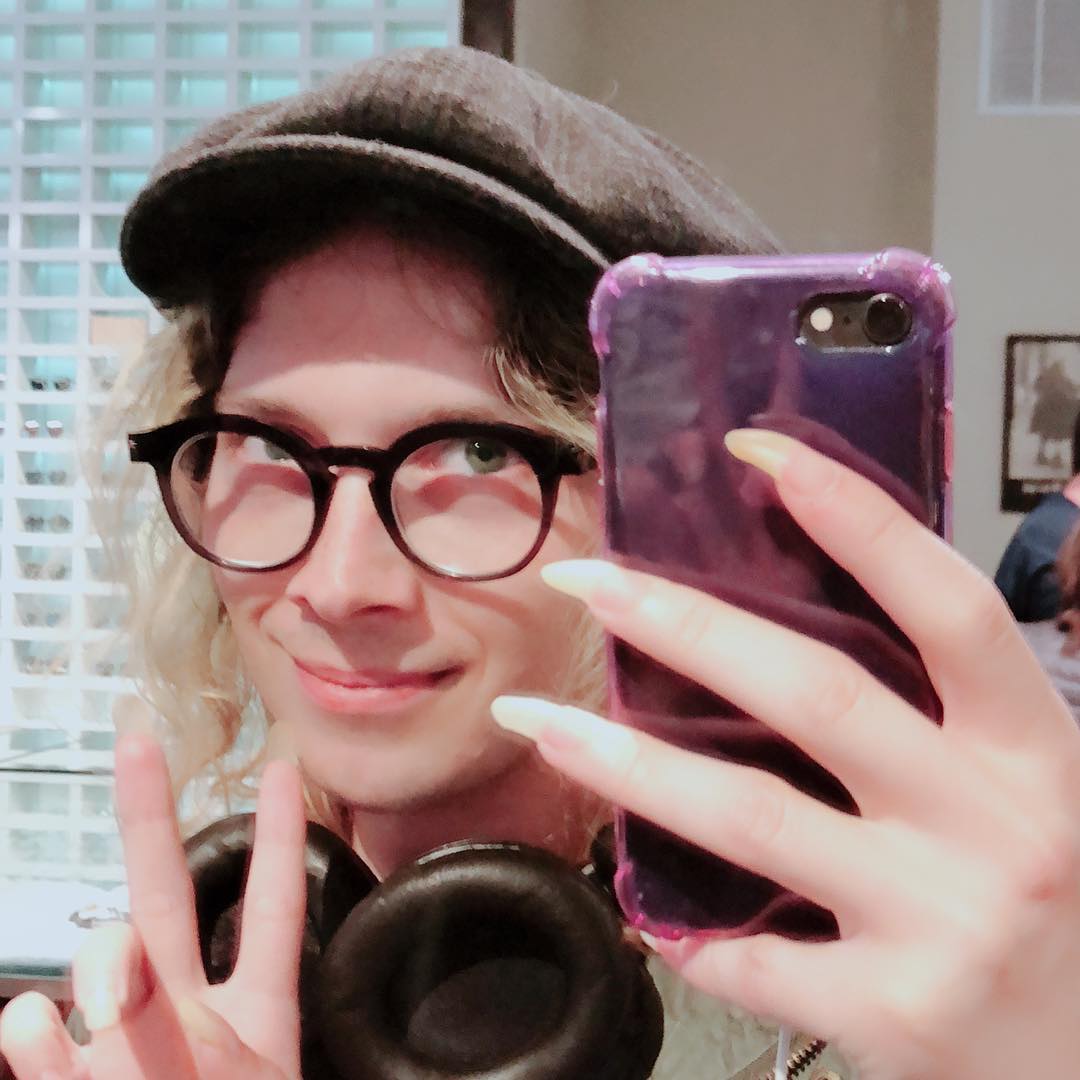 Hi folks! I’m iaman (they/them), I’ve been in the hobby for a few years now but have mostly just lurked around various forums! Got into mechanical keyboards cause I spend most of my day typing (I build websites) and wanted a better typing experience than laptops allow.

My first keyboard mod was a weird paint-over of a cheap, terrible keyboard’s keycaps for an installation of GREAT ARTIST:

GREAT ARTIST keyboard: every key has some kind of weird symbol on it to indicate a different image manipulation action3263×1342 633 KB
(it’s an interactive piece where every key does some kind of different image manipulation or sound effect; I didn’t make the game but we wanted to have it at an event with a keyboard that invited folks to play around and understand it more intuitively than a standard keyset tends to allow)

My first serious mech keyboard purchase was a das (I imagine this is true for a number of folks here?) with MX blues that has since become my partner’s primary keyboard:

Then I moved over to using a K-Type (which I’m using to type this right now) that still has the Clears from that drop (although I’ll be replacing them with 62g Zealios when the V2s ship to me), which had some shine-through caps before I replaced them with GMK Laser: 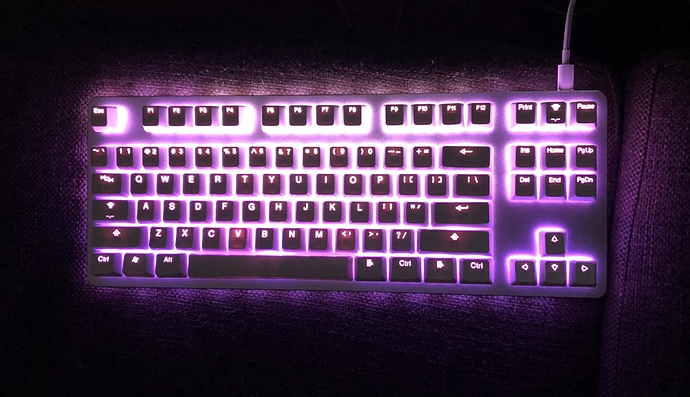 Then I just had to stop typing on a miserable Apple keyboard at work, so I grabbed a Ducky One with MX Clears: 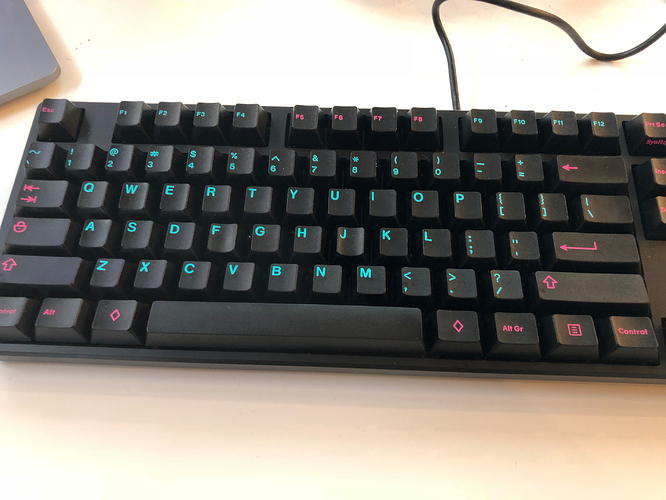 And then I got sick of staring at a board without LEDs at work so I grabbed a CTRL and built it out with V1 Zilents (will likely be replaced with V2 Zilents when those ship): 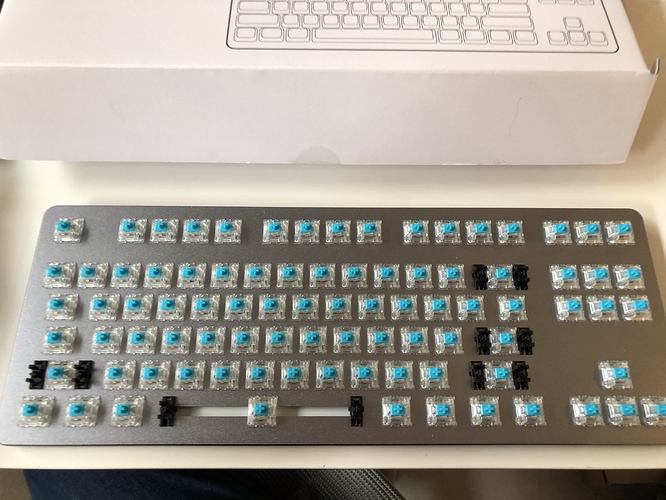 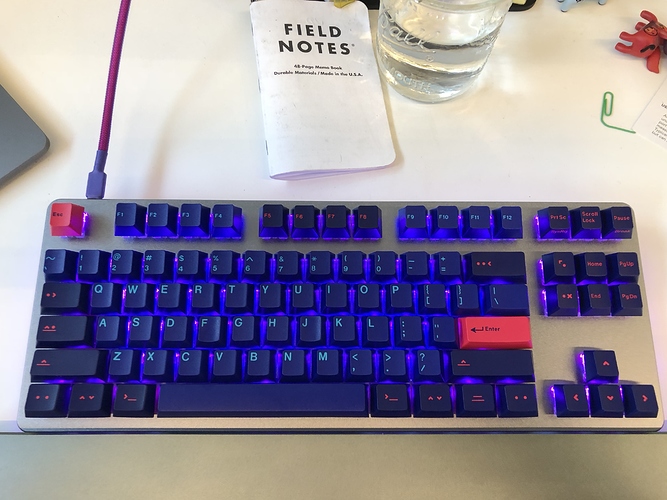 Now I’ve got some LFKPad PCBs shipping to me so I can pair my TKLs with numpads since I desperately miss being able to type numbers rapidly.

Hey welcome to the site! Looks like your off to a great start with your collection!

Thanks for the welcome! Super inspired by all the neat custom stuff going on in the community, makes me want to get to working with the Glowforge we’ve got in the office!

Welcome to the community! Can’t wait to see what you contribute!

Well it’s a bit of a weird first contribution, but, hey! I just added support for vertically-oriented animations to the Massdrop CTRL & ALT keyboards.

Placed a bunch of Box Pinks in my K-Type earlier today, and was having trouble getting them to fit into the plate (in a way my Zeal switches never gave me); I know the Box switches are notoriously tight fits (in a number of ways), but I found that using a switch puller to push the clips in while I applied light pressure from the top made the task significantly easier.

Always nice to learn a new thing when I’m messing around with my keyboards!

The K-type also has a pretty tight plate. I’ve shaved plastic off plenty of switches trying to fit them into that plate lol

(Okay, three digits might be excessive but who’s to say? Better to be safe than sorry, right?)

So, I have a Massdrop CTRL. This was my office keyboard up until I shifted to working remote full-time (just before the pandemic), but hasn’t really seen any use since then (my home office keyboard was my K-Type, which will be replaced by an Electrotype 87, but since I neither have the time nor the tools to deal with that right now it is on the backburner/a candidate to send to somebody better than myself to build), so it has just been collecting dust. However, the hotswap nature of it makes it a pretty solid platform for testing frankenswitches on a real setup in real use, so I wanted to make it a little bit nicer for my future self.

In pursuit of that goal, I grabbed two upgrades for it:

First step in this build was to unbuild the original board. Here it is without switches:

Massdrop CTRL keyboard3642×1494 1.57 MB
(I know, this case is dirty. Keeping it any degree of clean in the open office was… a challenge to which I did not rise)

Here it is, ready for me to take off the back:

Now, the switch puller for the CTRL unscrews to become a tool you’re intended to use to unscrew the back, but frankly it’s trash. I used a much-better hex wrench I (thankfully) had from my PC-building toolset instead, and it was much better for taking these screws out.

And here it is with the back taken off:

Here’s the diffuser layer for the original Massdrop CTRL:

And here’s the diffuser layer for the Drop CTRL: 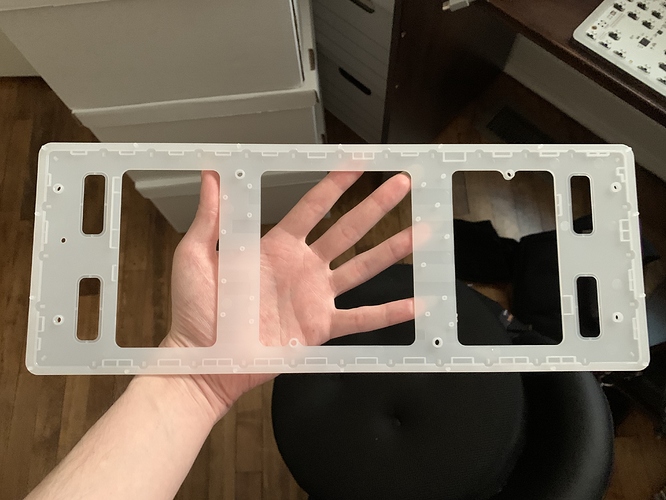 A much more complicated plastic layer with many structural and alignment-focused changes3821×2866 2.57 MB

The latter is much more complicated, and has spots to hold the plates for the magnetic feet as well as a lot of structural elements that seem like they isolate and protect components from dust. Seems like some good changes to me.

After taking the PCB out, all I needed to do was rebuild. But, instead, I decided to compare the cases a little.

And here’s the new one (which I got in “Almost Black”):

Grossness of the old one aside, the anodization on the new one seems a little smoother (although this could just be the change of color; I wasn’t a fan of the original silver, and the darker shade is definitely more forgiving). Still feels a bit thinner/flimsy than would be ideal, but this is Drop we’re talking about so my expectations were not high.

Okay, anodization shots aside it was time to rebuild. Here’s the PCB in its new home:

And now it’s time to install the foam!

A laser- and self-cut foam on top of the PCB3816×1536 1.44 MB
I had to make some extra cuts to not cover some of the LEDs, but whether that’s due to my PCB being from the original run or due to the regular CTRL having a different PCB than the high-profile the foam is supposed to be for or due to QC on MK Ultra’s part I do not know. This didn’t take much time, though, so that’s fine, even if my cuts aren’t as clean as the laser’s are.

Then the diffuser layer goes on top (with plates for the feet):

And then it’s just a matter of screwing the bottom back on, putting the new feet on, and putting the stabilizers back in (which I should definitely mod, but my partner was getting up and it was time to play some Animal Crossing):

All in all, this was pretty simple and nice. I get why other folks love doing these build logs and hope to do more (and more complicated ones) in the future. Still have to test this buddy out to see how it feels with the foam, but for now my animal neighbors await!

UPDATE: I have now used the board a little bit and I can pretty confidently say that foam is magic for a less-than-stellar board like this in terms of softening the overall feel and rounding out the sound of switches. Neat!

UPDATE 2: Thought I should include a photo of the family at the desk rn: 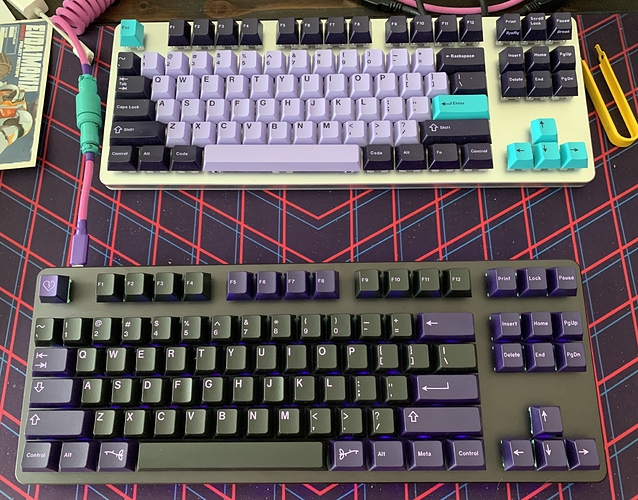 You have my commendation, for being able to type with those nails. If I let mine get any longer then 1mm past my finger tip, they’re broken with in minutes of touching a keyboard.

I’m lucky in that my nails are very flexy—I understand that not everybody’s are, my partner’s are pretty rigid and prone to breaking—but they definitely can become inconvenient in the wintertime over here in Chicago. I usually keep them trimmed a bit shorter during the winter to try to avoid breaking them, but otherwise they hold up!

I do type faster when they’re shorter, though