How would you adjust ANSI 60% to be ortholinear?

I talked about this a bit in my introduction post, but this might be a better place for the discussion.

The question is, what minimal changes would you make to the 60% section of an ANSI layout to make it mostly-ortholinear?

Most vertical-column keyboards I’ve come across make other more radical changes to the layout as well (think thumb clusters, function layer dependency, vertical stagger, etc…). How would you go about avoiding that (assuming you wanted to, of course) if you were trying to design an otherwise “normal” TKL or full-size board?

Some background: I’m currently working on a custom design/build with the intention of keeping the layout as close to “normal” TKL as possible, but with vertical columns. I’m trying to make something that someone who doesn’t want to learn a new layout could look at without getting freaked out. The function row, arrow keys, etc seem fine as is, so it’s mostly the 60% section (is there a proper name for that?) that I’m looking to adjust. I have some ideas of my own (I’ll post below), but am interested to hear what other folks think!

This is where I’m at with this right now:

R1: Widen backtick/tilde by 0.5u and shorten Backspace accordingly. This feels wrong given that most people don’t use backtick much… but they do hit Backspace a lot. But it seemed necessary in order to line up the number keys with R2. I also considered moving backtick to the immediate left of Backspace, and shifting all the other keys left one spot, - that way it would be the 1 key that was larger, which might be a better use of real estate, but that option ultimately seemed more disruptive and less symmetrical.

R2: No changes. This row is nice and symmetrical as is, and I wanted to concentrate the resizing on keys that were already unusually wide or narrow.

R3: Shorten Caps Lock by 0.25u and lengthen Enter accordingly. It’s Caps Lock, I have no problems marginalizing it… A larger Enter seems fine as well.

R4: This is where things get interesting! And potentially deal-breaking for existing “proper” touch-typists. Left Shift is lengthened 0.25u… Shifting the rest of the row to the right by a full column. So, while on a standard keyboard a touch typist would consider V to be “under” F, with this layout it’s actually C that ends up “under” F.

My main motivation here was avoiding shifting the row to the left, which would result in a stubby Left Shift key and a Right Shift key that was almost as wide as the spacebar… That said, I think this decision might also be justifiable given that the R4 alpha keys are offset from R3 (home row) by 0.5u - so geometrically, a shift to the right is no more of a dispacement than a “proper” shift to the left would be. Given that hitting R1 and R2 involves shifting fingers to the left of home row positions, I suspect many people hit R4 by shifting fingers to the left as well (the keys aren’t any further away, after all). The common complaint about B being on the “wrong” sides of split keyboards is one data point here. To be honest, I’m still on the fence about this change, and waffle between it being either clever or utterly disqualifying.

R5: Increase the size of all modifier keys to 1.5u (except Menu, which grows to 2u to keep the spacebar centered around the homing keys), and shorten the spacebar to 4u to match.

Would love to hear people’s thoughts or suggestions!

Why not ape the Boardwalk’s layout? https://www.panc.co/boardwalk-group-buy.html

Interesting, I hadn’t seen that before. Sort of Type-Matrix-ish. I like the Ergodox keycap compatibility…

With uniform 1.5u side columns you lose that nice slope on the side keys, which is too bad, but maybe not a deal breaker. This is what you get with the straight side columns and no other special key sizes (other than space):

From there the obvious choice seems like extending out Enter and Left Shift. Then I want to extend Right Shift to shift over R4 again, filling things in and adding symmetry. But that leads back where we started…

Maybe instead of extending outwards to fill the R3 and R4 gaps, Shift and Enter should stay the same size and just shift to the right? But then how to fill that awkward space…

Edit: Ok, last one for the night… This eliminates Menu and actually moves a few pinky keys to different rows (

) but has a nice overall balance to it. Ctrl not being in the very bottom right could be a dealbreaker though (or just having a non-modifier in the modifer row at all…)

Edit 2: Ok, THIS is the last one… Mod keys are bigger again and Ctrl is where you expect it. These last two are only 14u wide, which I kind of like.

The brackets end up in a weird position, but other than that this looks very usable IMO.

Of course I will always hold ISO closest to my heart, so here’s a ISO mockup using only two non-standard keys, a 1u backspace, and a 2u vertical enter (which can use a 2u space, or a 2u vertical key from a numpad).

I actually thing I’ve seen a board with a similar layout to that, but can’t recall where.

If you ever wanted to make one yourself you could just put paste the raw KLE data into http://builder.swillkb.com/ and get the files for a plate from there. A lasercut acrylic plate is like $20, but you would have to handwire it though.

We’ve already had the Keeblade, time for the Keebuster Sword

60% or TKL? These are quite different. 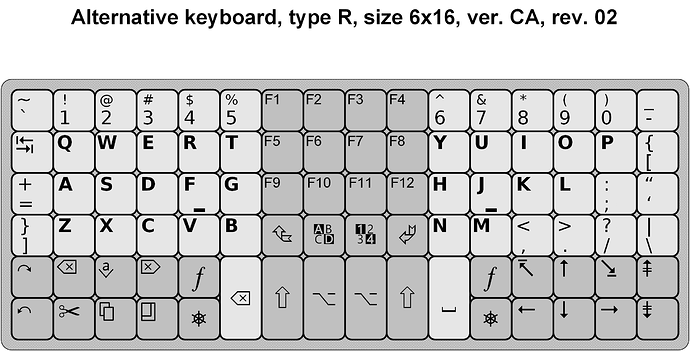 Here’re some variations for the middle key array.

This reminds me of something I noodled on some time ago and haven’t tried yet, so of course if my fingers touched it they might actually hate it, so… only one way to tell.
http://www.keyboard-layout-editor.com/#/gists/cc2e6bce472247b904d8ea1770c481d8 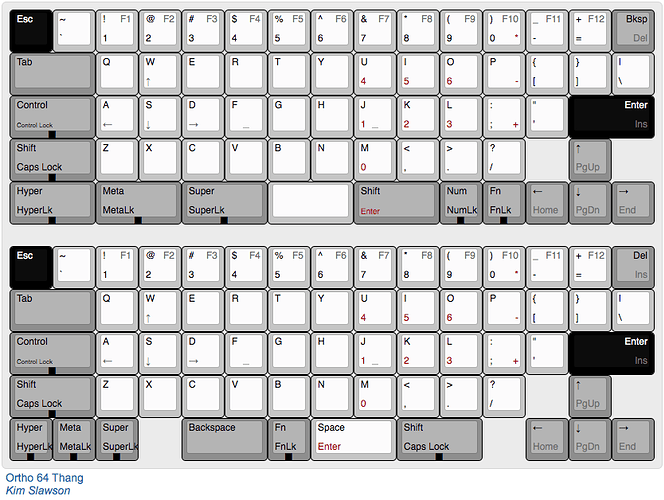 I wanted to keep the columns as they are in QWERTY. My happy little 40% zlant I use does this and works well (but then again it’s not true ortholinear, rather, it has 0.25u uniform stagger row-to-row, so perhaps I’m comparing apples and oranges).

My motivation was to use some 2u POS keys I had along with DCS/DSA on my XD75. If I redid it today I would change the bottom row… it doesn’t look that usable

My EZK 90 was motivated by a study on how to improve and to fix the TypeMatrix 2030 layout. It keeps the 3 valuable characteristics of the TypeMatrix, namely (1) laptop form factor, (2) seperation between left and right alphanumeric arrays, and (3) two bottom rows, with all navigation keys under the right hand.

There are three improvements. (a) Maximum hand separation. (b) Reduced load on pinkies and index fingers, at the cost of increased load on thumbs. ( c ) Balanced load between left and right hands.

There is one fix. The topology of (i.e. relative position between) modifier keys and navigation keys. The new topology is identical to that of standard/TKL layout. The purpose was to preserve skill set of existing users of these layout.

My 5x15 layout realizes most of these ideas in an other (readily available) form factor. 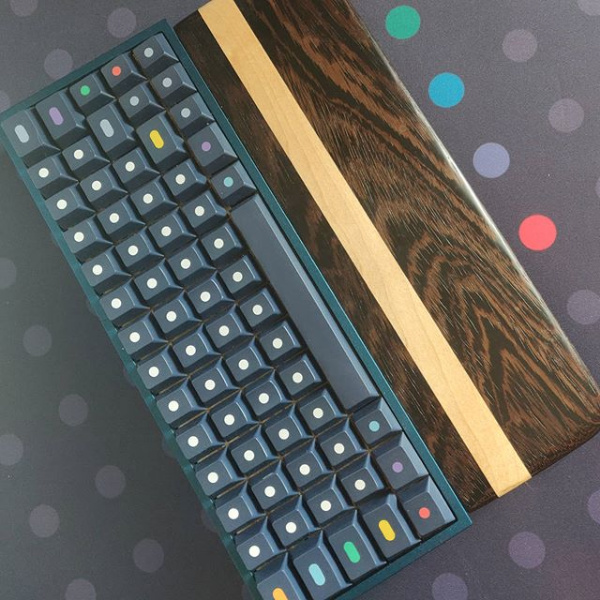