I want to see if y’all are interested in a small, ARM based split keyboard: the Ganymede.
I’m thinking about running a GB for the choc version of the Ganymede with a stainless steel case.

But first, let me summarise the Ganymede keyboard.
Ganymede is a small keyboard - 44 hot-swappable keys in total; it uses a STM32F303CCT6 ARM MCU (just like the Proton-C) on the left side and an PCA9675 i/o expander on the right side. It supports tenting using 3 legs like the ErgoDox EZ. The keyboard has a dedicated EEPROM (M24M01) and support for per key RGB and RGB backlight using two dedicated IS31FL3733 ICs. Eventually it will support VIA-like dynamic keymaps without re-flashing and maybe even all those funky RGB effects. Also the Ganymede is a really low profile keyboard. With switches installed it is only 13mm in total height.

I created the Ganymede because I wanted a split keyboard made for small hands. For everybody who can not easily reach the 2nd row of thumb keys, or the inner keys on an ErgoDox EZ.

Here are some images of the current revision of a working* Ganymede: 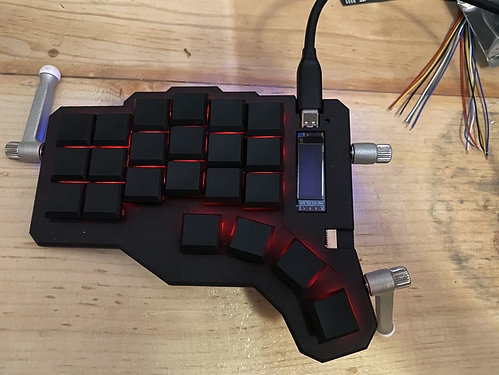 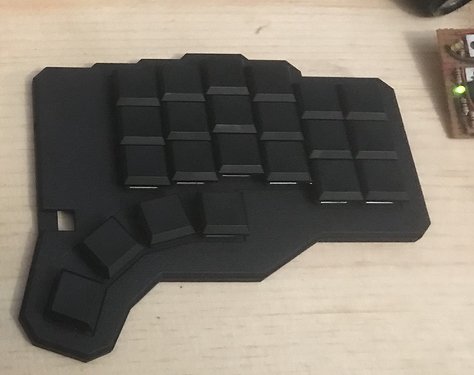 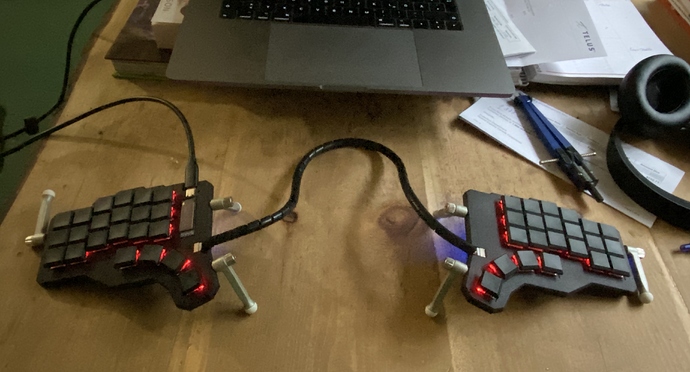 The hardware works fine, but the software needs polish.

Now, is that something you’d want to enter a GB on? A split keyboard with a CNC milled stainless steel case? I’ve been playing around with 3 variations of the case to achieve a slightly more polished look & feel:

In all cases the PCB will be identical and support everything, but the case cutouts will be different.

Now the nicest upside of a steel case is its weight. As per Fusion 360 each side would weight roughly 320g. That would make the PCB-less case clock in at ~650g; with switches, keycaps and PCB it would probably be close to 1kg in total.

As the components are rather small the PCB would come fully assembled, with only elements not supported by the case left unpopulated. E.g. if the final case design has no cutout for backlight those footprints would be left empty.

So is that something y’all’d want to own? If yes, which case version (OLED, backlight, nothing?) I’ve not finished the CNC-friendly version of the case so I don’t have an accurate price for the entire package yet.

if I went in on this, I’d definitely say OLED would be the move for a stainless steel case

Is this dependant on the split code that needs to be reworked in QMK for arm? Or the I/O extender resolves that issue?

The I/O expander makes this independent of the entire split-ARM situation in QMK. It also means that the keyboard has a single MCU and can only be operated with a USB-C cable attached to the left hand side.

I’ll take a look if I can hide the PCB part of the OLED; I might be able to reduce the cutout and hide the PCB by trimming the pinheader legs, allowing a nice finish even for the OLED case.

No OLED for me, I already have a monitor.

Is bluetooth a possibility? Makes sense to be thin & portable but if you can’t use it with an iPad…that’s my portable/travel device.

Is that doable? minus the LEDs of course.

I think the big challenge with bluetooth is finding enough space for the battery. I need to look into that. That said I think the keyboard might work with a lightning to usb-c cable, I need to verify that though.

Beautiful creation! I am always a fan of split ergo keyboards, but here’s one with extra great features: hot swap, low profile, steel case, and Proton-C! Good on you for avoiding the QMK code’s Split/I2C/ARM quagmire.

Is this something you are selling? I am interested in aluminum casing & Choc keys, with backlit keys, either fully assembled or as kit. I have large hands though

This is an interest check, so OP is checking to see if enough people are interested to start a group buy and start actually selling the boards.

correct. I think there need to be at least 10 or more people interested in buying this - to put some numbers down, based on my current case design (which still needs some tweaking for the threaded holes):

So I’m only considering a GB if I find 10 or more interested people, with maybe a total cost 250 - 300 USD - that’s for an assembled PCB with aluminium case (no switches).
If more folks would get in the price would of course be lower.
Given that I’m mostly using 0603 or smaller components and no through hole going with a PCBA service is probably required, hence the rough estimate.

That said, I don’t see this happening at this point as per aboves interest.