Kailh Deep Sea - anyone have an opinion?

Something has me curious about trying more silent switches. If anyone has tried the Kailh Deep Sea switches (especially the v3 version), let me know what you thought.

I own Gazzew’s silent linear steams, otemu silent sky, cherry silent red and black, gateron silent yellow, and serikos (JWK Silent). I don’t like any of them.

I tried to recreate the experience by putting a lubed cherry silent stem in a NK dry housing. It was close, but still not as good.

So here we are with another silent switch, the Kailh Deep Sea v3. The dampening material is apparently in the housing top and bottom and not on the stem. These will feel cruddy like the other silents I don’t like, right? I don’t need to spend money, right? Anyone have these?

Funny you should ask this.

I was just researching the Kailh Deep Sea a little bit last night.

Apparently, they are probably comparable to the Kailh Fried Egg silent switches. They seem to use the same recent housing design and dampening method, and spring weight may be similar.

I just ordered samples of Fried Egg to evaluate. When looking at the comments in Youtube videos featuring these two switches, commentators were sometimes asked if these felt ‘mushy’ as other silent switches.

The video producers in one or two instances claimed that these new Kailh designs, can’t remember which of the two, did not feel as mushy as other silents. That even OUTEMU Bobagum felt mushy by comparison. But that is a very small sample.

I personally doubt that these Kailh switches will offer much new, but I ordered some because they are affordable. I also ordered something called a “Kailh MX Silent tactile:”

They were only $9 CAD to have 10 delivered. It could be identical to Kailh BOX Silent Brown for all I know, but the stem looks different and the spring weight may be a little less.

Advice regarding the Fried Egg and Deep Sea switches was somewhat varied. Some people lubed theirs by applying generous 205g0 to the upper housing guide-rails. However, others found that to reduce the “rubber-dome” sound of the stock switch. Personally, the sound seemed “wetter” after lube, to my ears.

These are easily the best MX-compatible silent tactiles I have ever used. They basically sound and feel like silenced EC switches, maybe about 30-40 G by those measurements. Very crisp and bouncy and responsive. I’m using thick Cherry PBT with these to dampen the sound.

Stock Silent Skies are very problematic. The housing is not sized properly, they are very noisy, wobble is insane, and it is a lube-starved switch. But once you take the Silent Sky stems and put them in another housing, they can be very good and are very underrated.

I have silent sky stems and clears so I’ll try that. Thanks for the heads up.

I don’t like Kailh’s BOX design, the regular BOX designs are okay, but their round stem BOX design is just not good, the samples I have are pretty bad, their only advantage is that they work with cherry profile keycaps in both directions.

For some reason every silent switch variant I tried seems to be worse than it’s original non silent switch, maybe the dampeners are touching the rails causing friction? I’m not sure.

The best silent switch I have are the Boba Gums, very smooth, but their bottom out is on the softer (and quiter) side.

I understand what you mean about the box with round stem. The cream box switches I tried are pretty terrible.

There’s something about a cherry silent stem in a PC Gateron housing. It’s got a bit of wobble, but the sound and feel is quite different from other silenced switches. It’s not mushy at all, but very quiet and very smooth.

I wonder how similar this and the Fried Egg are to Box Silent Pinks? Same stem and housing shape, at least from the outside.

If they’re based on the same design, I can tell you a few things to expect.

Personally I consider Bobagums quite mushy - but that’s also how they’re so whisper-quiet - those pads are thin and soft. The Kailh BOX Silent pads, on the other hand, are large, broad, and firm (and located in the stem). 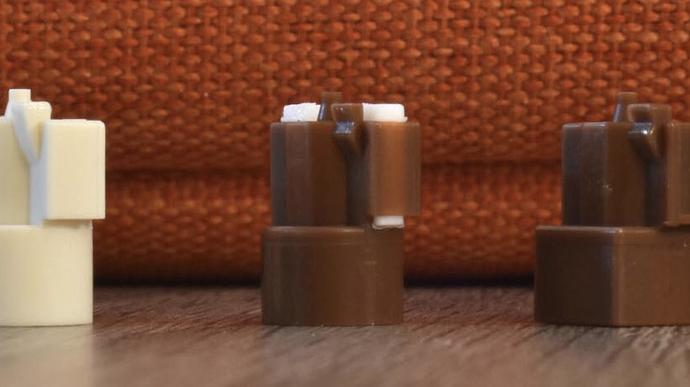 Edit: different design - the dampening is indeed in the housings, top and bottom.

Is it just me? Or do switches improve over time in terms of spring ping, and (obviously) smoothness. My Zilents even an annoying ping on my backspace key for the first 6 months that I have had them. That being said, isn’t it really difficult to know if the switch is good one until it’s been broken in?

Obviously, there are some characteristics that won’t improve like stem wobble and sound.

Yes, I’ll try to post about the Fried Egg and the “Kailh Silent Tactile” when they come in.

Regarding the OUTEMU Silent Skies, reviews suggested that the stems were the best part, and that’s my experience as well. [In fact, Gazzew stopped selling the switches except for the stems].

If you put them in light tactile housings [Cherry, TTC Gold Brown V2, Aliaz], then it’s basically just over an MX Brown in tactility. Like running a 55-60 G Ergo Clear.

I saw from your first post that you are modding Aliaz. An interesting recipe is Silent Sky in Aliaz with a 52 G OUTEMU spring [the long one]. You only need to lube the stem and spring, can get away maybe with not lubing the housing. It’s a bit of a ‘thud’ or dull thump in terms of the curve, but it’s quiet and easy-to-build. Bottoms-out maybe too easily.

Otherwise, put stem in any of those other mentioned housings and lube with 3204. TX films might help if you are building the Silent Sky Clears.

The 52 G Bobagums made me respect that spring. It’s lower-weight, but punchy. There’s something unique and punchy about Bobagums at that weight. I wonder if they can be used stock.

As far as the BOX Creams go, I actually enjoyed them. I appreciated the lower weight. Sure, they are sandy and bad-sounding. But I was coming directly from MX Browns, so I felt at home with the BOX Creams. I feel as if Kailh could make a ready-made worn-in Brown if they put a small tactile bump in the BOX Creams.

I haven’t typed on my Zilents in a while, but I wonder if the spring ping has gone away.

Switches are definitely getting better over time, it wil not be a huge leap, but its enough to notice, though it can take quite a bit of time to notice, I have given away KS8 Gat yellows I had shortly, and got KS9 Gat yellows which were awful, they had this awful resistance, the action didn’t feel particularly scratchy but I felt plastic-y resistance, they also had annoying binding towards the north side. So I got a again a batch of KS8, until they arrived (took around a month along with above-avreage kb usage) maybe more for them to get and I definitely felt the KS9 got slightly better, the binding was still there sadly.

After couple of months with the KS8 Gat Yellows they feel better, but the spring ping is just as bad, sadly no time to lube them.

which I think has the same pads as the Deep Sea

I watched a vid on the deep seas, and based on what I saw in that and the description this poster gave the silencing pads seem to be located on the rails of the top housing and the entire floor of the bottom. Just my guess, but I feel like this would give a more muted and silence sound as the sound would have to travel through the silicone(or whatever material it may be) similar to the pe foam mod.

I have my issues with the U4Ts, but with the very smooth housing, tight tolerances, quality materials, and excellently factory lubed spring and leaf, its obvious that the boba line was meant to be used as-is, solid quality, really puts to shame other vendors.

A few notes for anyone considering building Silent Skies:

-You can get away with 52-60 G in light tactile housings, but what the stem really wants is traditional Ergo Clear weights like 62-65 G.

-When using light springs, I tend to use a heavier spring on the spacebar

-You can use the stock springs in the TTC Gold Brown V2, which means basically that you can throw Silent Sky stems right into the switch, just lubing the springs at minimum.

-They still are mushy on bottom-out, like most silent switches. So you won’t be able to avoid that. They can still feel consistent overall on a decent board. People have said that Kailh Deep Sea and Fried Egg seem less mushy than other silents.

the silencing pads seem to be located on the rails of the top housing and the entire floor of the bottom.

Found a photo that confirms this on kprepublic - the silicone dampening is indeed part of the housing. I’m interested in these now… Thats what I thought. Also the stem appears to not have dampening, correct me if Im wrong, so the kailh box round stem frankenswitching possibles are quite interesting. Kailh box silent pinks + this might be “interesting”, lots of silencing. Also kailh box creams could be cool if they act anything like normal kailhs in other switches, although they would not have pole bottom outs.

Edit: Looking at the kailh website page on this switch, the stem and housings are polished. However it doesn’t say anything about materials which is kinda a bummer.

This sorta relates to this topic. A new kailh silent, I saw somewhere someone said the silencing is in the housing just like the deep seas

Interesting. The yellow stem one is tactile, too.

From this photo of the new kailh silents you mentioned, it appears that they are not the same as the deep sea. I think I see dampening material on the top of the stem when I click to zoom

Yeah its hard to tell, those springs look pretty long tho

Should probably make another thread to discuss these kailh switches, but I got clarification from the discord. These are not the same as the deep sea. 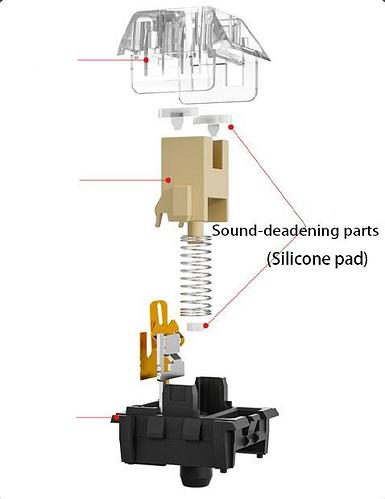