The KeebMonkey Iceberg Switch, we customized this switch from a top manufacturer. The switch, we think, is the most cost-effective switch in the world, since it is only selling at 0.3USD. The switch is extra smooth thanks to the molds and the...

To my eye, these look identical to TTC Gold Pinks - but instead of a featherweight spring, these have longboi dual-coil ones.

They compare these to TTC switches but don’t name the manufacturer - I’d say it’s either TTC, or another, smaller one utilizing tooling supplied by TTC.

If these stay $0.25 - $0.30 apice and continue to be readily available, I think they might make something of a splash.

They look really nice. I wonder if they’ll ever plan to make 5 pin variants.

If these are good they could be titanic, but I worry in making such a cost effective switch it could really sink

The stem and shape of the housing totally look TTC - but I do see that these have wing latches instead of the four smaller clips TTC’s usually have. Kyoorious.

They are made by A-lion and manufactured in house by them afaik, the housing is branded Aflion. I’ve been playing around with them for… i think a month or 2 now? Way before Keebmonkey were even a thing as far as i know, so that affiliation is a bit…confusing to me if not a bit weird. They have a very unique sound imo, and they feel quite nice but are a bit lighter than i prefer.

I get that there are generally a few manufacturers and many variations are “recolors” but these seem like the version offered directly from the manufacturer on Aliexpress. Like the previous poster mentions - what does KeebMonkey bring to the table here other than the bulk buy (maybe?) to keep price down? Based on the listing - I don’t see any variation at all that would suggest they “worked with the manufacturer to customize” the switch.

Just for some caution here, it seems that Keebmonkey resells things that have been on aliexpress/taobao/other vendors for months now and claim to have either designed them or manufactured them themselves which… i don’t think is the case. Best example are either these Iceberg switches or the artisans they are selling. If you browse aliexpress or taobao regularly, those should be familiar. KeebMonkey MAC Modular Artisan Keycap (here they are on aliexpress, they’ve been on here for much longer 2PCS Mechanical Keyboard Keycap Mac Macintosh Shape Retro Computer Personality Light transmitting Keycap ESC Key + 1.5U Tab Key|Mice & Keyboards Accessories| - AliExpress)

They outright say on their about page they resell things they buy in bulk.

I don’t see anything about reselling, other than vague references to relationships in the supply chain? The quote that sticks out to me from the About page is

“We design and manufacture and distribute keyboard related products such as switches, keycaps, keyboard kits, etc.”

which seems to be demonstrably untrue?

I am the founder of KeebMonkey. Regarding the Iceberg switches, we ordered 100K with customized lubing methods and a better stem. The contract for this is already published in our discord.

Because of the lead-time, we are unable to wait for customized colors or logos. And the manufacturer is also happy with having their own logo on it, ending with the result that you see.

We have personal interests in most of the products we retail.

For example, we singed global agency contracts with the manufacture and invested in the molds, contributed designs for the Macintosh Artisan Keycaps.

For the Icebergs, we customized some parts in it and ordered a huge bunch of those.

As I said on the homepage, we have some really deep connections and good relationships with manufacturers.

For the Aliexpress page that you’ve seen, that is a sign of an unantuorized distributor.

That still doesn’t add up. I’ve had my Icebergs for a while (around 2 months or so now from a reputable store) , and they have the exact same weight, colors, factory lubing and dual stage spring as described on your own Site. None of the listings on various storefronts, some of which multiple months old now, have mentioned Keebmonkey or any affiliation in any way. Yet you claim to have “customized” them. That, in addition to claims of artisans being “hand made” when they are not and claims of “unaothorized distributors” when they have been all over aliexpress, taobao and etsy for multiple months or over a year. Also, didn’t the contract state that you are only allowed to sell the switches in combination with a keyboard and not just the switches on their own? Everything about this seems shady to me but, for the slim chance, sorry in advance if it turns out that i’m in the wrong here.

Well - still haven’t gotten any shipping notification from KeebMonkey, but these are on DORP now:

Prices are about the same. The “AFLION” badge is clearly visible in the photos.

I am looking forward to giving these a try - if nothing else I don’t have any other switches that color.

I’ve had mine for a few days, typing test here.

I haven’t used them enough for an in-depth review yet, but for 25-30 cents they’re very solid. Very stable N/S and smooth as well; just a light bit of hushed texture in the press - a good bit less than average. Definitely a budget contender worth considering, at minimum.

I don’t have a “standard” one to compare it against so I can’t comment one way or the other about KeebMonkey’s input here, but either way it’s a totally decent 3-pin linear. 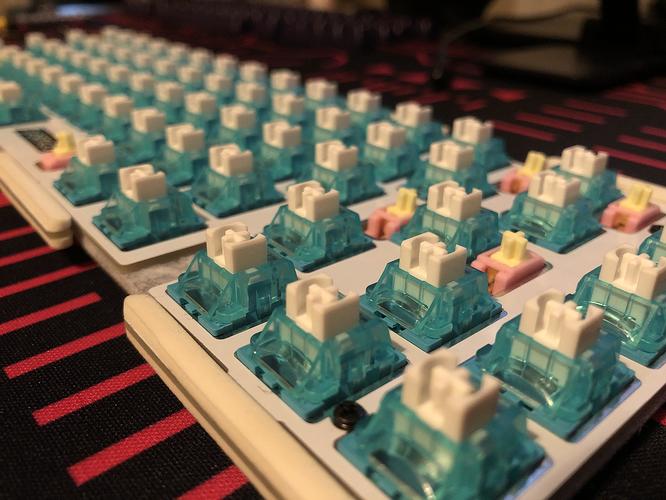 I’ve been using the Icebergs for a few solid days now, and I have to say, they really are very good for the price. If the main claim in question is whether or not these give the venerable Gat Yellow a run for its budget-king money, well… yeah - I think they do.

What’s not clear to me is the exact role KeebMonkey had in shaping the final product - but regardless, the Aflion Icebergs are genuinely competent 3-pin switches being sold at a good value. The description KM gives of these is pretty accurate; they’re smooth like newer TTC linears, but less harsh - somewhere between a TTC Gold Pink and a Momoka Frog in terms of sound and feel. Not as smooth as pre-lubed JWK’s, but more smooth than dry ones.

They’re a hair light for my personal tastes, but totally satisfying in terms of user-experience.

Here’s a recording of the switches:

Some Gat Yellows recorded in the same board for comparison; last few seconds might be the most informative with slow deliberate presses:

Uncomplicated conclusion: If you’re looking for a smooth linear and wanting to make the most of a tight budget, well - you could do a whole lot worse than KeebMonkey’s pre-lubed Aflion Icebergs.

Hmm… a recolor of ice berg with a bottom out feel of momoka frog?

I know why they made that comparison - because they look vaguely similar and the Icebergs ran recently - but that’s definitely not the description I would have written for the Christmas Bells.

Obviously I’ve never tried these switches - but I have tried Icebergs and Frogs, and I have every reason to think these will be a lot more like Frogs than Icebergs.

MMK developed the tooling for the Frog from the ground-up, and beyond the aesthetics of a shrouded stem and basic switch type, they have little else in common with Icebergs. From what I can tell, these are Frog re-colors with a different spring - the stem and housing shapes are identical to Frogs.

This is probably my third or fourth rant about Drop’s product description writer - not for their writing skill which is just fine, but for their apparently heavy reliance on context clues over first or even second-hand knowledge. I think Icebergs are mentioned in the description over Frogs simply because Icebergs are more fresh in the writer’s memory. They sold Frogs on Drop, too, so it really would make more sense to make that comparison for like, all the reasons…

Icebergs are in the “budget” realm at 30 cents or less; they don’t even directly compete with Momoka’s switches, which are comfortably on the “middle shelf” at around 50 cents. They also feel very different.

Icebergs are more close to a typical linear, having little to no travel resistance aside from the spring itself, a standard travel and actuation height, and of course they enjoy good smoothness for the price. They have mild if noticeable texture to the travel. They are somewhat high-pitched, clacky / clinky switches, not too unlike the TTCs they compare themselves with if a hair less refined.

Frogs, on the other hand, are a pretty atypical linear, having an unusual-feeling mild resistance to the travel and a lower-than-average actuation height. While there is that mild plastic-on-plastic resistance, Frogs are almost completely free of grain in the travel and are exceptionally smooth for any price bracket. The simultaneous presence of that smoothness and resistance make the switch difficult to describe accurately, since usually mechanical resistance is associated with scratch and grain. Frogs have a deep, muted sound, with only a bit of spring chatter taking away from the otherwise clean timbre.

Say all the to say - I think it would be reasonable to expect these festive switches to be a lot like Frogs, and only a little like Icebergs - which is really only a good thing as far as I’m concerned.

Oh, Dorp. Your products really are good, but your communication about them could still use a little work.

Frogs, on the other hand, are a pretty atypical linear, having an unusual-feeling mild resistance to the travel and a lower-than-average actuation height. While there is that mild plastic-on-plastic resistance, Frogs are almost completely free of grain in the travel and are exceptionally smooth for any price bracket. The simultaneous presence of that smoothness and resistance make the switch difficult to describe accurately, since usually mechanical resistance is associated with scratch and grain. Frogs have a deep, muted sound, with only a bit of spring chatter taking away from the otherwise clean timbre.

Agree with you on this. I love frog switches