Was thinking about the nibblets and the tape mod. A while back didn’t you have these little silicone or rubber balls you but in switches? I wonder how a case full of those and the tape mod would sound 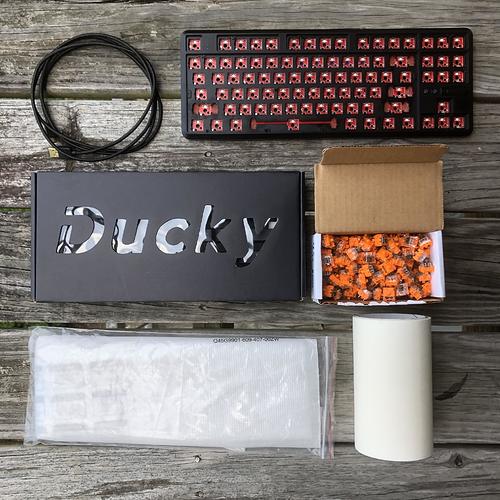 A modest but versatile workhorse keeb for my dad.

I sent him a tester with a dozen or so switches, mostly tactiles on the mild end since that’s what he was familiar with. Out of those, he picked TTC Gold Brown v3’s, which I happened to have a box of.

Stock, this unbranded oem equivalent of a Rakk Lam-Ang Pro sounds pretty rough with these switches, so it’s time for some acoustic modding. Unlike the branded one, these don’t come with any pre-installed.

Wew lawd, those are ping-y! Time to lube some springs.

Time for a spring swap test! Some of my 67g Aqua King springs are horribly crunchy and I’m coming to like a bit lighter weight in my linears. I picked up 53g and 58g symmetric springs from Kinetic Labs to see which I prefer more. I’m swapping one of each so I can be horribly indecisive about which to use for about an hour. Then it’ll be on to lubing and swapping the chosen replacements.

That’s some impressive ping! How are the switches otherwise?

Honestly they’re pretty typical brown clones, maybe most similar to Gateron’s. They’re plenty smooth but the sound is on the harsh side even without the ping. 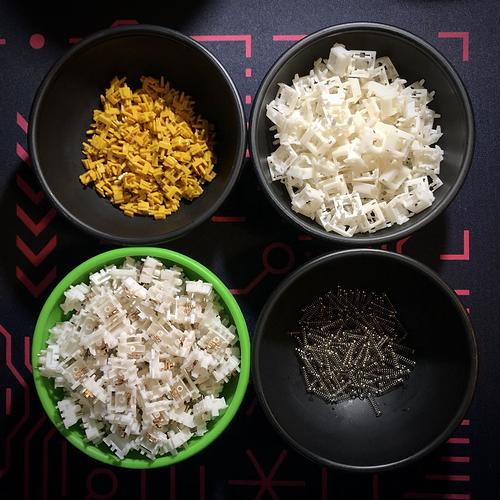 I also have these to add some tasty to the task; 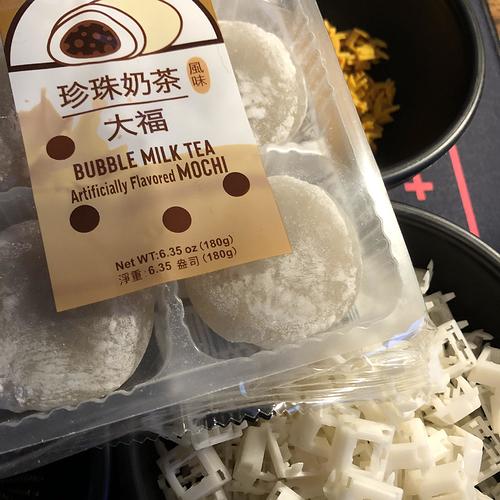 wow does Den-Fi require great pics of anything he’s using? love that shot of the switch parts in bowls. also thats truly the best mochi to pair with with those boba U4T’s

wow does Den-Fi require great pics of anything he’s using? 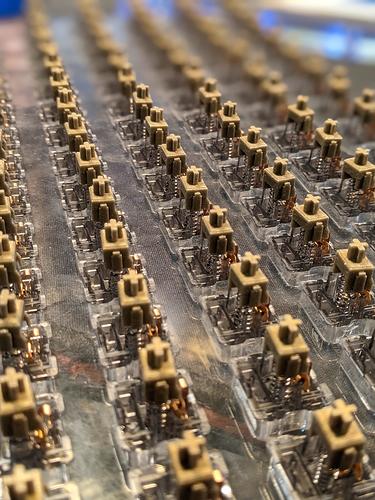 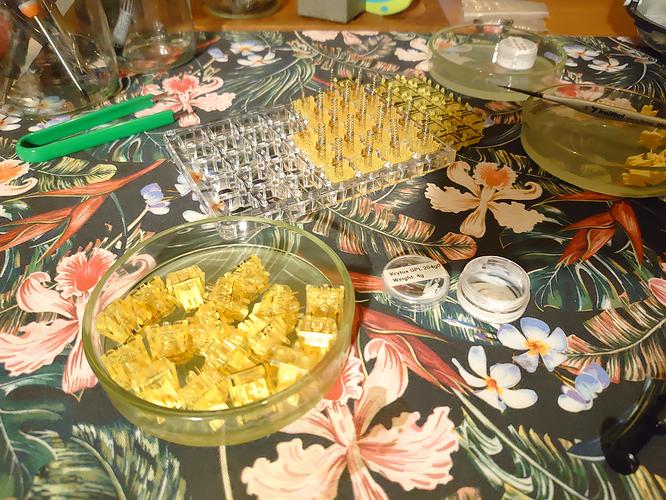 Building an ALPS TKL. Well, Matias QC actually but close enough. Here switches are disassembled for modding and lubing. I’ll be modifying the protruding arm on the contact leaf to give it a nice rounder second half. As to the stem, rubber silencers will be removed then thoroughly lubed w/205g0, primarily to suppress extraneous noises Matias switches seem to be prone to. 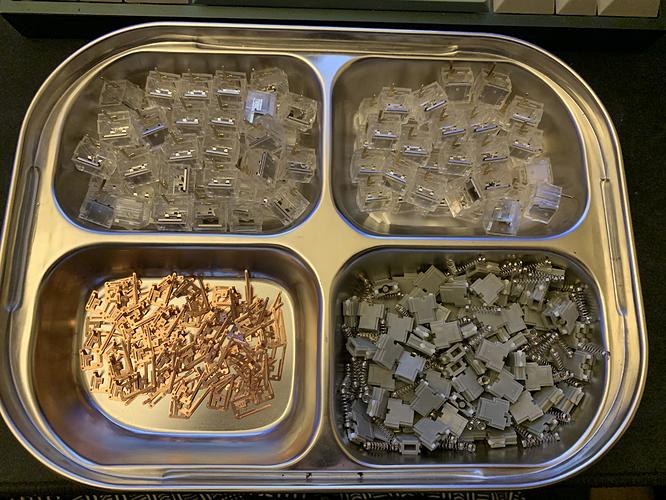 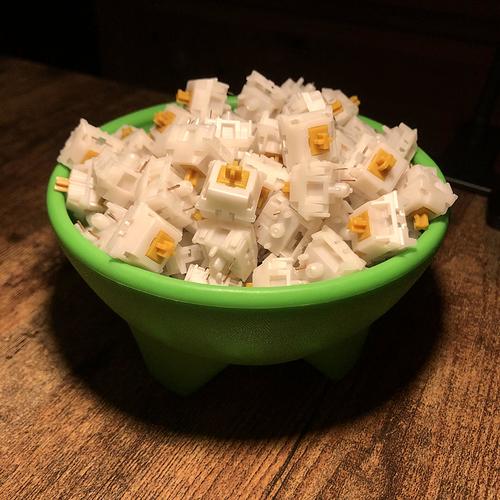 Fruits of the brushie brushie - also known as Boba U4Ts, which I lubed with 106 oil for @Den-Fi over the weekend.

Of the 180-switch lot, I used three for experimentation and testing, accidentally launched one stem into another dimension with my tweezers, and ended up with 28 that still have some metallic ring even after lubing; leaving a final batch of just over 145 that I’m satisfied with - pictured above in the green salsa bowl.

As for those ring-y 28, I’ll be popping those back open to see if I can identify and address the source of their… song.

They feel as good as the others, but acoustic tuning is an integral goal here so I’ll be taking another look at the leaves and springs of those. 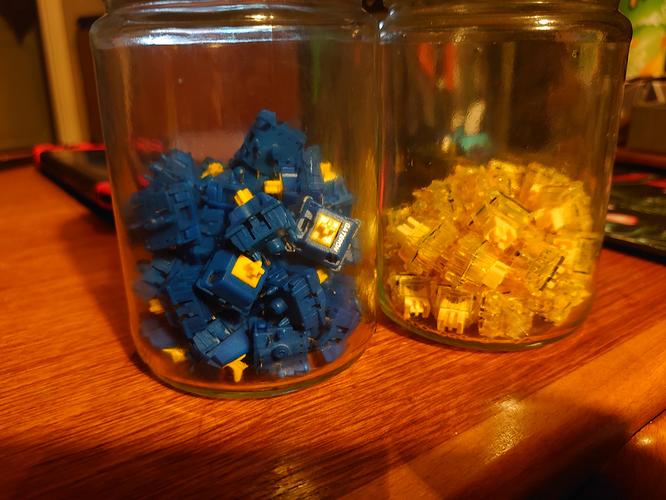 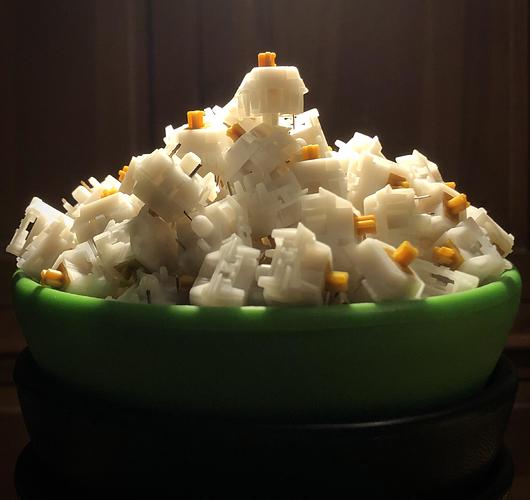 Well. It’s tomorrow - and I’m happy to report the tenacious pings were any easy fix. Just a quick donut-dip, and not a spring to be heard.

Upon closer inspection, I now see that’s not popcorn

TBF, it is buttery. 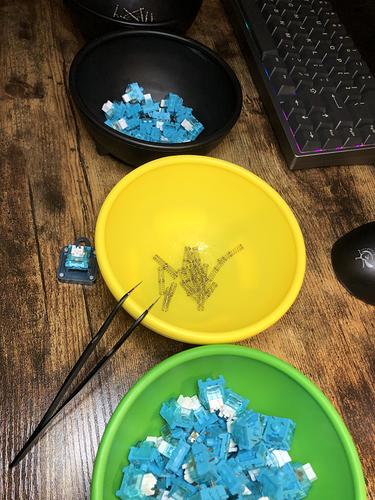 Spring swapping! I also soaked them in 106. 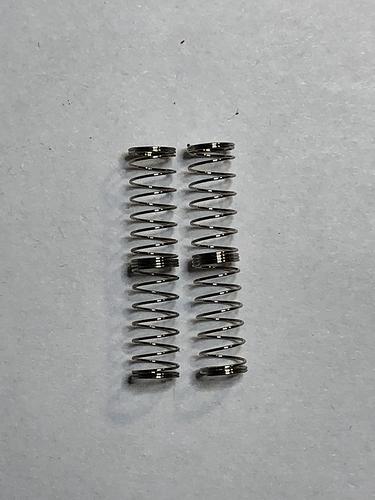 I’m glad they feel different because they sure look similar! 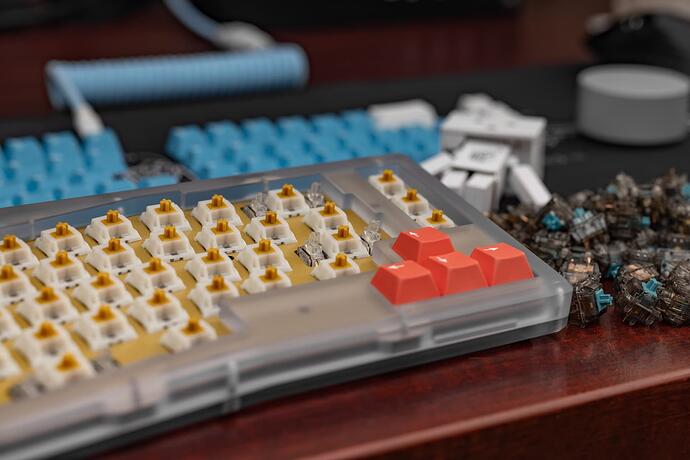 Did some long overdue keyboard chores on the MAJA this morning. @Deadeye lubed some Boba U4Ts for me way back in October. I gave the board and keycaps a good cleaning and swapped in the new switches. They feel absolutely wonderful. There’s a good deal more meat to the thock than the T1. Though those were plenty tactile.