I’ve recently got myself a Dygma Raise split mechanical keyboard, and have been experimenting with keycaps and switches (currently landed on XDA and Outemu Silent Peach). I’m also learning to touch-type…about 30 years too late, but here we are

So, now that I am on the (pre-built) mechanical keyboard bandwagon, I can’t stand my work keyboard anymore and am thinking of getting a second one…I can’t currently afford to get a second Raise and there are some things that I struggle with in daily use (e.g. no arrow keys…).

I’ve been thinking about the Keychron Q1v2 - partly because I rather like the grey colour (I’m shallow, I know…), and more importantly because of the Mac-centric keycaps and the Function keys and the knob! But it ain’t split…and in theory, I think I should get another split keyboard, because that was the point in the first place - to help me with my neck and shoulders and stop me looking down all-day long on a cramped laptop keyboard…

Keychron has a split keyboard coming out later in the year or early next year (the prototypes look good), so do I:

Any suggestions? Talk me out of/into spending more money…

You might take a look at Keebio and see if they have anything that might fit your needs. They have a few split kits, and you can save a bit by opting for something like an acrylic sheet or 3d printed case.

patience and if feasible find a keyboard meetup / shop ? if at all in your area, make that an adventure (budget + time willing).

if i could do it all over again and not have gotten into this hobby during a pandemic–trying boards in person after having owned one keeb would have helped me focus my purchases. but if money’s no issue carry on friend.

i don’t know your priorities with regards to choosing next board but if the next boards don’t have the keys/functions you’d need (e.g. dedicated arrows instead of on a layer); or it is not ergonomically suited to you-- those boards that don’t fit your body and needs are no-gos.

I did look at those, but, I’m not sure what it is exactly, they leave me cold

but you are right that would be a much more pragmatic choice - I’ll have another look!

Good advice! I’d love to go to a meet-up, but unfortunately there are none where I am.

My reasoning was that the Keychron would be the same form factor (not split) as the current keyboard at work, but much nicer to type on, half the price of the Raise and have the Mac centric keys (and keycaps) to boot. In fact, I was thinking of taking the Raise to work (to go with the work PC laptop) and keep it PC centric, while using the Keychron with its Mac-abilities at home (where I most miss those keys).

I may just have convinced myself…

You should check out the Arisu and Alice thread for a better idea of options. A split with arrow keys is usually known as an Arisu layout and there are a bunch of relatively affordable boards in that split layout style that are comparable to the Q10.

Thanks! that was helpful, if perhaps not how you intended, because it made me realise I really do not want Arisu/Alice layout…

mostly because the key placement would mean retraining my muscle memory, rather than just taking a ‘traditional’ keyboard and moving it apart and angling it slightly. I hope this makes sense…

So, I think I can move between regular keyboard and moving it apart, but not add in different key placements such as Alice/Arisu, ortholinear (though I really like the idea), etc…

and I am much more wedded to the Mac-centric ease of use and look of a pre-built keychron, than I realised.

It doesn’t necessarily have to be cheap, but the Raise ended up being about $600, whereas a keychron or similar would be $300…still a lot of money, but much less

(and I saw they have just released Monokei extras - but at $770 way out of my range!)

Sometimes process of elimination is the best way to find what you truly want.

Well then…let’s try this! It’s heavy! And much more ‘click’ than ‘clock’ sounding (not bad, just unexpected), with the exception of the space bar which sounds unpleasantly hollow.

First time in Red Silent Linear, too, so lots of moving parts

I can try some of my surplus silent switches and keycaps until i get the right combo…though I quite like the yellow and grey keycaps (and Mac mods and function keys - yay!) 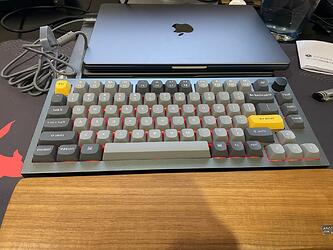