Mistakes you make that make you facepalm

So, here’s a (hopefully) fun topic: what mistakes do you make that you know you should have learned by now?

Let me give an example… Tonight I ordered a whole bunch of switches, and I ordered 80 of each of them because I was thinking about building out my 71-key keyboards.

However, I quite a few TKL and 98 key keyboards sitting around here that I would like to re-build as well. So, I won’t be able to use any of these batches of switches to build out those keyboards until I order more.

But, it gets worse, this isn’t the first time I’ve done this. In fact, most of the switches I have here I don’t have enough to build out a 98 key keyboard…despite having several of them sitting around for 2+ months.

Ooo, my favorite. When I need to solder the pin headers to the MCU on the top-side, but forget and put them on the bottom.

I usually have to step a way for a bit after that.

I once started putting switches in a Kara’s PCB without the plate (they’re not optional). Nothing like that sort of smooth brain moment (and pulling 20 or so switches) to keep you humble.

I usually have to step a way for a bit after that.

Oh I can imagine that… All that soldering time, then have de-solder, flip it over, and re-solder it… Ooof.

For the longest time I always got confused which way certain stabs should go in. I know now, but I’ve brainfarted on live stream builds before and it was always embarrassing lol

Keeb goofs I have made exactly once:

A goof that took a while for me to realize was a goof, after doing it a few times:

That time I placed my coffee very poorly

Everyone who uses a computer learns this lesson eventually.

I just made one of those 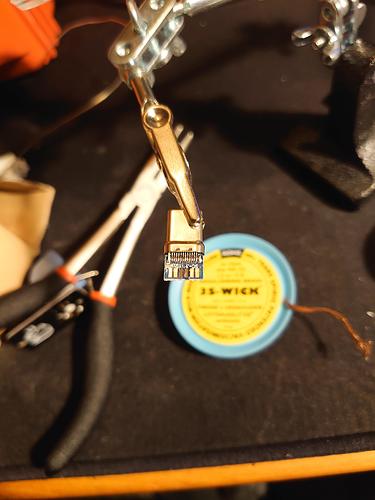 Adding to my embarrassment with another that I just remembered. I ruined more than a handful of switches in my early days of lubing and filming switches by putting the top housing back on backwards. I inadvertently made the smoothest switch of all time but that’s because my mistake resulted in the leaf being ripped out when I tried to correct it.

this one always hurts

buying more keyboards than I have time to build

What? you mean 5+ kits sitting around is a bad idea?

Changing all the footprints on a PCB but forgetting 2.

Totally where I started this thread after realizing I bought 5 sets of switches, all of them in groups of 80… Not considering I have two TKL’s and a 98-key here that I should build.

Buying vintage shit that I will totally restore or repurpose, then it collects dust in my closet

This sounds like something I will do in the future. I’ve done that with other hobbies. (In fact, I still have an Edison Diamond Disc player sitting in my basement that needs to be restored.)

Taking notes for a future mistake to avoid…

After being used to building 60% boards, I forgot to put in a stabilizer in a TKL I was building (R Shift vs my normal split R Shift). It was completely built…

ouchie. I’ve done similar. Nothing like desoldering a board before you even get to type on it.

Learning what ESD was for the first time. $#@! that sucked.

What’s worse was having to wait the two weeks for a new PCB and having to look at my facepalm everyday until it arrived. Humbling.

Yep. I got lucky - my board only reset and managed not to get fried, but I was worried there for a minute. I heard the SNAP! and saw the LEDs go dark - it was then I realized that it might be a good idea to save the aluminum case keebs for the warm months. My love of flannel probably doesn’t help.

RE: ESD protection - I’ve heard some boards have some kind of this, but I’ve also heard… well not much good in terms of effectiveness. The board I ESD’d was a KBD67 v3 (KBD67 mkii pcb in an aluminum sandwich case) - that PCB comes with a little mesh-covered pad that’s supposed to be used between the PCB and case for ESD protection, but I remember reading that people actually had worse issues with the thing in place, so I didn’t use it. Granted it’s a sample size of one, but hey - my PCB survived a shock without it.