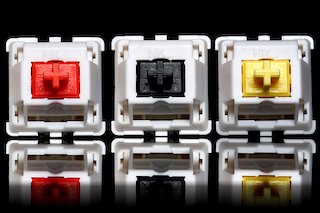 The Silk Series are linear switches manufactured by JWK and factory lubed with Krytox 205g0. 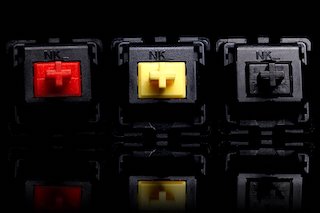 The Dry Series are linear switches manufactured by JWK and are not factory lubed. These are best for people who want to open and lubricate switches without having to wipe off the factory lubricant.

Self shilling for a moment:

I went over these switches on my stream including putting them under a microscope so we could look at the prelubed switches a bit more closely. I also did stem and housing comparisons between Cherry MX black switches and dry black switches.

Honestly for their price these definitely seem like some decent switches. I’ll be excited to build up a full board with some switches this week!

(promocode: hueyhueyhuey for 5% off Novelkeys orders)

thoughts on the silk vs lubing yourself? lubing is such a pain in the butt… I’m still hesitant to buy durock products but this might be what gets me.

From my brief experience so far without having a board built up with self lubed drys or factory lubed silks, I’d still take self lubing over factory lubing.

I think for many people their silk switches could work for them depending on what they want out of a lube switch. It could work for some, or be horrible for others.

Went with Dry Yellow because I enjoy lubing.

What are the odds that some of the European vendors will sell this? Candykeys.com have Cream’s…

It got me. I snagged 100 Silk yellows. We shall see how they do.

Wondering how these compare with the lubed 62g vint black x tealios I’ve got, or the stock novelkeys creams. If only there were a meetup nearby.

This was a fun stream!

It could work for some, or be horrible for others.

Yeah I was tempted to order some of the silk yellows since I like the aesthetics of the white housiongs better & have had no problem just lubing over the factory lube on Tangies. Although I highly doubt Tangies are using 205g0 & they are very lightly lubed. So I went with 100 of the dry yellows to be on the safe side since I’ll be lubing them myself anyways.

BTW, anybody else get any of these in yet & can compare them with any other Durock/JWK linears? Kinda curious how they compare & if they need to be filmed like the previous ones?

BTW, anybody else get any of these in yet & can compare them with any other Durock/JWK linears? Kinda curious how they compare & if they need to be filmed like the previous ones?

I’ve been typing on the Silks for a few days now. They do be smooth af right out the bag.

These are my first JWK switches so I can’t compare there, but I can tell you I don’t think they need films.

I’ve seen some commentary that the Drys might have different tolerances but I haven’t seen any verification of that.

Holding the top and bottom half in my fingers and trying to move them around / twist them did not make evident any play or rattle. I was able to get the tiniest movement by pushing quite hard - but I think that’s way outside normal use-case forces, and was just overcoming the clips with force more than finding play.

So far I’m really liking these. I originally ordered them mainly out of curiosity and to share my thoughts of them with the community - but I’m thinking they’ll have a place in my rotation of daily-drivers as well.

I currently have them paired with some thin-ish double-shot ABS TaiHao caps that haven’t seen the light of day in years (my first keyset!). I’d originally stopped using those caps because I thought they were just too shrill-sounding with the knock-off blues I was using at the time - but with these Silks, they actually make a sound I think is quite pleasant.

I think this and a few other pairings make a good case for thin caps having a time and place.

About that pleasant sound - ever heard a rain stick or shuffled a handful of small seashells? Gently typing on these with the thin ABS caps sounds about like a rain stick does when it’s slowing down, and you can pick out the individual plinks and plonks.

Working with some dry versions today. I find it interesting that after I’ve handled the stems, I definitely have something slick on my fingers. It’s subtle, but there is some coating. Maybe it’s just like a release agent or something??

Anyway, for smoothness, these really dont need lubrication at all. Of course, sound wise it will help a lot. I’m currently filming and swapping a 100g progressive spring. Yeah, I’m crazy like that.

The 100g progressive is fun. It’s lighter than a black spring at the top, about the same at actuation, and quite stiffer at bottom out.

Force Curve Graphs out on Sunday?

Have you guys ever noticed this? I was not going to bother bringing it up but I’ve now seen it in every JWK linear switch I own (including tangerines, everglide, alpacas, NK dry, H1s, FFF cheese, well you get the point. I own them all). It’s such a slight annoyance, but it gets to me.

If you slow press a JWK switch (especially off center), at the last fraction of a millimeter there is a sudden drop off event as the stem suddenly drops to fully bottom out. I’m guessing it’s either from the slider moving past all upper support from the switch top housing or something to do with the contact leaf. It’s ever so slightly worse when you add films too.

Just wondering if others had noticed.

It seems to be the worst on my alpacas. I haven’t noticed it with tactile switches such as Koalas and T1s

Hmm. I haven’t noticed that. But I will keep a finger out in case it happens.

If you slow press a JWK switch (especially off center), at the last fraction of a millimeter there is a sudden drop off event as the stem suddenly drops to fully bottom out.

I thought I was going crazy - I started noticing that slowly pressing my lubed & filmed NK Dry Yellows off-centre (finger on south-west part of keycap; switch LED at south position), the switch would “slip” to bottom-out. Releasing the key slowly and off-centre with my finger on the same spot of the keycap makes it “shoot” up from bottom-out to not-bottom-out.

I thought it was me overlubing but no matter how much lube I removed I still kept getting that “slip” feeling around the bottom out.

Yeah I was the same. Then I realized it was on all of the different variants, so I knew I couldn’t be the only one to notice.

It’s just a minor annoyance. And once you feel it and know how to repeat it, it can become more annoying.

I have the FFF (Lubed filmed) and tangerines 62g (Stock) and when pressing off angle with MT3 profile caps the switch stem is rubbing against something very un-smooth, feels like there are tiny bumps. Happens regularly with modifier keys.

However, the silk reds I have been using for weeks never exhibited this issue. I tested the black and yellows also no issue.

I’m glad this is “fixed” cause it’s super annoying

Can someone enlighten me as to exactly how stock Alpacas compare with stock Novelkeys Silk Yellow?

I actually like the Durock factory lube on the Alpacas, just find the spring a little weak. I like 63.5 - 65 G for these.

Does the Silk factory lube feel “slow” and “waxy” in comparison to the Alpacas, or does it preserve the “skating” feel of most JWK linears?

The lube job on my Silks is actually worse than my Alpalcas - the Alpalcas are lubed on the tactile legs and plunger, while Silks have the entire tactile leg side of the stem lubed and nothing else, and feel noticeable less smooth because of it. Not slow feeling though, just underlubed.
Silks do have noticeably less wobble though, especially horizontally. Also the 63.5 and 62g springs feel identical, and are both too light for me so I ended up swapping them with 60g slow Spirit springs for some extra yellow. After relubing they feel like deluxe, slighly lighter Gat Yellows, I love em.