Novelkeys stabilizers are the worst I have ever used

Previously I had been using cherry, zeal, and gateron (taobao rebranded zeal RIP). and early round C3. I ran out of all of these in March, so I grabbed some NK thinking they were rebranded Durock v2.

NK is by far the worst. I have tried using 3 different sets, and they are all hilariously bad. There is some weird lip at the bottom of the stabs that binds on off center presses. They take to lube like mixing oil and water. They seem to be impossible to balance.

Pretty frustrating since I could have bought Zeal stabs for the same price and had a monumentally better experience.

Anyone else had this happen? Did I just get an entire batch of duds?

I recently used the NK screw-in stabs on a couple of builds. I’m not sure what you mean by ‘impossible to balance’, but I haven’t observed any binding issues, nor any lube issues (I used 205g0 on the stems, and a squirt of SuperLube in the underside). All stab keys on both builds feel and sound as I’d expect.

Can you get a picture of the lip you mentioned?

Okay, I just spent 20 minutes trying to find it, and I am confident this is the issue. The stems have an embossed NK logo on the side. Since letters stick out, they get caught on the rails. It only binds if severely offcenter, but I can still easily feel the bump on a slightly offcenter press. 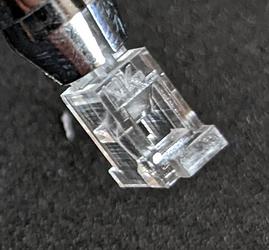 By balance I mean straightening the wire. It seems to get out of whack more easily than other wires I have used.

I got out my zeal stabs to compare. I can full tilt the stem as far as possible any possible way, and it always smooth. Not surprising since they don’t have embossed logos on the stem…

The “NK_” logo pretty much goes from one end to the other so bumper rails will definitely catch. Micro-mesh failed to grind out the protruding logo. I think Dremel is called for.

Wow. Thanks for taking the time to identify the issue and get photos.

But now I’m even more curious - based on those pictures, I’m not sure why I’m not seeing exactly the same issues, and I’m away from my workspace for a few days, so I can’t open the build up and take a closer look. But I’m wondering whether the issue is there and I’m just less sensitive to it (not likely, but possible) or whether it has something to do with the level of switch wobble. Perhaps the stab flaws only become apparent when the switch stem can move more freely.

I’ll report back once I have a chance to look more closely.

I am very curious to see if it is just bad QC. I was building with Tecsee Ruby which has a decent amount of wobble, but I also manually check my stabs without a switch first. Funny thing is that the NK plate mount stabs I got at the same time don’t see to have this issue.

Seems like a common trait with NK, great designs, poor executions [and QC].

Seems like a common trait with NK, great designs, poor executions [and QC].

I received two NK87’s this week and only had the binding from the logo noticable on two of the 2u stabs in the bunch FWIW. Definitely was frustrating but I ended up just putting them on right shift which I rarely use. The biggest thing I noticed is that both boards came with SUPER bent 7u wires, like beyond un-usable. I wonder if this is due to poor assembly when installing them into the board to be packaged. Again, managed to get around it by just using a wire from KBD Fans but I’d be curious what other people’s experience with the wires have been, both when bought separately/installed by NK on a board

Can you shave the symbol with a razor?

I have also installed them in a board with no issues. I felt them catching when testing them prior to assembly by pulling the stems at extreme angles (relative to how they move when typing), but in actual use with keycaps I’ve had no perceptible friction/binding aside from some scratch when I hit the ends of the space bar, but that happens with all stabs I’ve used.

I’m really glad this was posted and someone figured out the potential cause. I had what sounds to be the same issue on my NK87 and it was really disappointing, but figured it was just my bad luck. I ended up swapping in some zeals and it feels great now. Hopefully NK reads this.

Can you shave the symbol with a razor?

Razor won’t cut it. I’ll have to use Dremel in anger.

Did you try cutting it with a sharp razor blade? After seeing this thread my plan was to remove the NK with a razor then clean it up with ultrafine sandpaper.

I’m sure you could take a knife or Dremel to it. I didn’t bother trying since they sounded bad and ticked like crazy after lubing anyway.

I’ve since ordered Durock V2 to replace them. I’m also interested in the Owlabs “liquid metal” though no one is talking about them? I haven’t seen any good arguments for Staebies besides tighter tolerances to convince me to wait for stock.

Anyway, the NK stabs will be relegated to modding experiments for whenever I get around that.

I got my NK87 and already had Durock stabs to replace the stock ones with, but hilariously noticed that the lube they put in the preinstalled stabs was only in the hole lacking the wire, the holes with wires were mostly bone-dry.