I have been experimenting with various spacebar inserts since I’ve been into the hobby (about a year).
I like how sorbothane (aka sorbo) inserts work on spacebars.
I would like to share my experiences on the matter.

The very first attempt was using a crudely hand-cut insert fit under an SA spacebar as shown:

I’ve used a 40 duro 0.10" sorbothane sheet from Amazon [link], scissors and office staples to cut the insert out of the sheet.

Keyboard setup was as follows:

Upon the insert installation, the effect on the spacebar sound had been evident immediately.
My personal textual description of the effect is that it became cleaner from noises and lower-pitched, but not silent.

I did not make any “scientific” sound recordings to demonstrate the difference, but here is the non-scientific, asmr’ish version: https://youtu.be/HFiE4tGkHbg

Using similar inserts on other stabilized keys had no effect that I could notice in this setup.

After reading on the internet and experimenting I arrived to the following understandings:

Unfortunately, sorbo is hard to work with:

If I recall correctly, I have read that sorbo as a material, is known to have a resemblance to meat, in particular, it would deform, but not tear, and remember its original form to restore to.

The above issues are problematic with keycaps that are shallow and have ribs in them (i.e. Cherry profile)

Before proceeding to my attempts with the GMK spacebars, here is one more SA variant that works:

It is a cleaner cut and sits tighter, and has about the same or better acoustic effect than the first variant.

Here is the spacebar from the Leopold keyboard (OEM profile):

Here I’ve used a similar 40 duro 0.10" sheet, but this time with a PSA for adhesion to the spacebar.

The 0.10" is thin enough to put it in under switch and stab areas (*).
Cutting was done using small scissors, and it was very difficult to do accurately. You can see that I have cut one of the sides too short and the other one too long, which prevents perfect contact and compression.
The effect on the spacebar sound is evident, but to a lesser degree than on the SA spacebars.

So far I’ve tested three different variants for 6.25u GMK spacebar sorbo inserts, here they are:

Using 0.10" sheet with PSA, I’ve cut small pieces to fit in between the ribs.
The effect on the sound is barely noticeable. My explanation for it is that each of the small pieces is too small on its own and that the degree of contact I was able to achieve is poor.

Using the same 0.10" with PSA, I’ve resected some of the offending ribs to be able to insert more sorbo, and in bigger pieces.

Suprisingly, there was no big improvement with this one. My explanation is that I have cut the sorbo too wide of a piece, and thus it separated in a few spots because there was too much of the compression.
Also I think that the amount of the material could be just not enough.

Using the thick 0.25" sheet, I’ve cut two pieces using scissors and a wire cutter. Then I’ve made the cutouts for the ribs using a small wire cutter and dremel with the disk tool (which was not fun).

Using dremel on sorbothane is apparently suboptimal becase the sorbo is too soft, but I could not find a better way to do these cuts.

It can be seen from the above photo that the sorbo-to-plastic contact is not good around the ribs. However, the contact on the sides is good, compressed evenly and there is more sorbothane overall.

This variant showed the strongest effect on the sound. 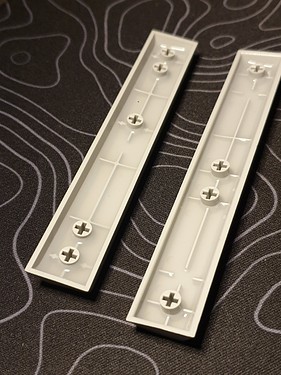 My conclusions so far

Obviously I like this mod, but cutting sorbo accurately is hard, and I suspect that not being able to do so hinders the effectiveness.

As a next step I would I like to get some of the inserts cut using die-cutting and make sure it indeed produces an improvement.

As for the taller profile (SA, MT3) the effect of hand-cut sorbo insert is already quite satisfying, in my opinion, and I urge you to a sheet of 0.25" thickness and try!

On tray-mounts, I also fill empty spaces below the spacebar between plate and PCB as well as below the PCB to deaden or sculpt the space bar sound even further. The same for large modifier keys that invites slamming, like backspace and return keys.

Does epoxy help with sound or just heft?

I’ve always wanted to load a spacebar down with plastic weld jb weld and try it out. Just have not done it yet. In theory it a good epoxy could remove warp from a spacebar if the spacebar was kept in a flat position during the entire curing process.

Does epoxy help with sound or just heft?

Both although extra heft does create more reverb in empty spaces below the space bar which is why I fill them.

This seems like something @jshufelt would be up to lol.

Great write up and analysis! The pictures really help demonstrate your points

If you guys want something that is malleable, easy to work with, not permanent, dampens vibrations like a pro, and is cheap to boot, look no further than some stick/blue tack. It’s been used for dampening, isolation,.and sound modding in speaker cabinets for decades. It works wonders in SA spacebars, but I haven’t tried (or needed) it in cherry bars. On a side note, I’m planning to fill my Bbox60 case to the brim with it when it arrives.

Cool. I’ll try adhesive putties like Blu Tack in the future. They’re cheaper, removable, reusable, and not messy to work with than epoxy.

@Manofinterests is not wrong LOL.

This is a great post! The result that I find most surprising is the silicone-filled spacebar - I would have bet that one would have had the most pronounced dampening of the bunch.

To be fair, I did not try liquid silicone in SA spacebar. You are welcome to try too!

I have never tried any of these – do they dry up after you apply them?

It doesn’t dry out. I’m currently using some that has to be upwards of 25 years old. It also removes cleanly, so you don’t have to worry about ruining your sets or their potential resell values. Plasticine could also serve this purpose (a fairly inexpensive non-hardening modeling clay), but it may not be as adhesive.

I tried this myself when I had an SA set and it worked really well. I found that using a single hole punch worked perfectly to make the holes for the stems.

Sorbothane works best when attached to the sides as those are large spans that are completely unsupported on one side. Sorbothane and a foam insert together should be a real effective combo, Sorbothane for dampening and lowering the resonance frequency. Foam for higher frequencies and reflections.

Acrytech makes a paint made to dampen speaker cabinets. Think of a water based paint with the consistency of tar. You can add sand to increase it’s mass. Not cost effective unless you need it for another purpose. For example, I build DIY speakers as a hobby and buy a gallon a year.

As for Blu-Tack, that’s an excellent idea as well.

Acrytech makes a paint made to dampen speaker cabinets. Think of a water based paint with the consistency of tar. You can add sand to increase it’s mass. Not cost effective unless you need it for another purpose. For example, I build DIY speakers as a hobby and buy a gallon a year.

I’m not familiar with Decicamp.

Now I can find it, thanks. Looks like it could work, too. Another similar, and possibly easier to work with product would be Green Glue: https://www.greengluecompany.com/