Just sharing an idea like I did with switch polishing, limited to tray-mount cases.

With tray-mount, plate sits atop PCB and does not touch the case walls. The idea is to insert rubber wedges between the plate edges and the case walls, fixing the plate in place. I have no idea how a wedged try-mount board might sound but I think it’s worth trying.

As to creating the wedges, my current plan is to cut up a rubber eraser into small triangular pieces with a blade. Scented erasers may also be a simple way to make your keyboard smell, um, fruity.

UPDATE1: Size of the gap may be too narrow on many of the exiting cases. But I don’t see that as a big issue because, if this hack is effective, tray-mount plate and case design can change to support the hack if not ship wedges along with plates. For testing purpose, I’m going to sacrifice a POM plate by grinding some notices on the sides to accommodate wedging.

I feel like this would help with sound, but probably not so much the feels except along the edges.

Ultimately for tray mount boards, the core opposing force you feel when typing are the tray posts and not anything else. Another potential option to try out inside tray mounted cases would be using small o-rings on the tray mount screws (either above the PCB, below the PCB, or both). This might help out a bit more with the feel, whereas wedges along the side may help with the sound. If you use wedges along the side, just make sure you don’t wedge the PCB too far and lose alignment between the USB port and hole

This is essentially what a Unikorn is, just a PCB/plate wedged into a tray mount case.

True, but the amount of tray mount posts and where they are definitely matter. The Unikorn doesn’t have the bottom, or mid posts which allows the keyboard to sit as if it was on a tray using the surrounding posts. This allows for some nice flex

I think these days, differentiating terminology between a traditional tray mount like a pok3r and the newer tray mounts we’ve seen like the Unikorn, Klippe, and others, might be looking into

I am still trying to figure out what the proper terminology is for the Unikorn mounting method. I’ve heard gummy worm used a lot.

Unikorn’s ‘wedge band’ looks great. Plate and PCB sorta holds it in place, padding in return and wedging the whole against the case at the same time. Very nice.

I’ve never been happy with the feel of the switches on my Unikorn. I suppose I’ve realized that I like a firmer board for linears. I plan to rebuild it with something tactile.

It’s a good ideea and someone did a sort of gasket mount to a tofu 60 : How to Gasket Mount KBDfans Tofu (Part 1) - Lesson on Gasket Mount Keyboards - YouTube

I don’t know if it’s the same approach you thought of but still, tray mount to gasket

Wow. That’s one wild video. Thx for the link!

UPDATE: Now wondering if a slightly oversized plate padding can do the same job with less restrictions.

I’m in the process of building up a Preonic in a Drop case this way. Tiny o-rings between the case and the standoffs (they’re soldered onto the pcb) and a length of 3.53mm thick gasket around the perimeter of the plate/pcb assembly. I tried 4mm but that way the gasket protrudes too far; 3.53mm seems to be the sweet spot (and is also readily available at the plumbing supply store nearby). Ideally, I’d want to use an o-ring gasket but I don’t think it’d be able to clear the stab housings, which jut out farther than switches. If I went full grid instead of 2x2u I’d go that route.

I’m gonna write a separate post once I get this thing up and running. Also waiting on a usb c breakout board… 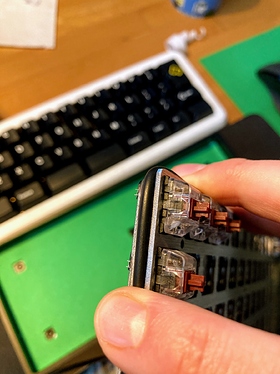 IMG_11351461×1948 378 KB
3.53mm gasket fits in between the plate/pcb sandwich. Next to no compression though, would like to experiment with adding a thicker but softer gasket. 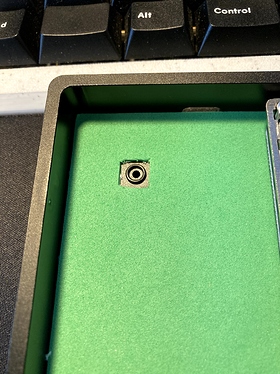 IMG_11331461×1948 706 KB
The green mat is craft foam I had lying around. still needs a cutout for usb c breakout board but you get the idea.
4 Likes
Rebuilding and remounting a broken Preonic – a journey riddled with o-rings, craft foam, breakout and daughter boards
chchchchalex October 13, 2020, 11:48pm #12

I was thinking about pushing the limits of the tofu and came along similar thoughts. I also thought it would have been interesting to have flex cuts in the plate where the wedge points would sit in the center of the cuts, giving the same effect as other flex-cut plates with explicitly mounted holes.