I’ve found that I like smooth SA caps from signature plastics better than other options, what texture do you prefer?

I’ve only tried PBT, SA, and GMK. Are KAM or KAT smooth or textured? Are there other good options for smooth keycaps or textured Keycaps?

I like both, though I really appreciate the silk texture of KAT.
What do you mean by “PBT”, is that “EPBT” (the manufacturer) or “PBT” (the material) ?
You should list profiles, and maybe manufacturers (like Cherry profile, which varies depending on that). Roughness, or smoothness depends on the mold that’s used, not the material, with a caveat, that ABS will become smoother over time (if used…). All plastics will erode of course, PBT will do it much slower than ABS.

Although I love SP SA smoothness, I don’t mind texture on keycaps either.
As an example I love typing on my MT3 PBT Serika keyset and it is significantly textured, at least much more than for a GMK set for example.

I’d prefer textured keycaps but I wouldn’t mind using both, sharp edges however? not really a fan of it.

It’s a tough call because I like both textured and smooth. Probably something middle ground would be a good compromise

I think I like smooth in the winter when my hands are dry and more textured it the summer, when a smooth keycap might get a bit slippery feeling.

I’m currently enjoying the texture on the polycarbonate caps from SP. I’ve never had anything quite like it. We need more polycarbonate caps. They feel and sound very different. They’re textured but it’s not as dry feeling. They sound similar to the PPS caps. Almost a glassy or metallic sound when dropped.

100% smooth. I don’t like the sandpaper feeling of PBT or moldings with intentional rough textures.

So I largely stick with MT3 and SA keysets.

Anyways, this specifically refers to the texture present in budget PBT keycap options. The typical texture a clone; blatantly anime set; or a budget China keyset GB would have. Feels like high-grade office bond paper smooth-ish with enough texture to keep things interesting. Many China-only keycap GBs at the 50-60usd base set mark feature the same finish. There are other objective metrics that would be more appropriate to critique on these cheap sets. I’m just arguing that texture is not one of them…though it is oft lumped together with the other issues of these low cost sets.

SP SA
Smoothest I’ve ever tried. These used to be my absolute favourite. SP SA speaks for itself really. 'nuff said.

It’s kinda hard to describe the texture…it’s like if you were just about to enter smooth…but you stopped short, and gave it a light texture. Basically, smoothest as something textured can be?

After getting my hands on KAT Lucky Jades and a few other KAT keysets (just 2 months ago). I am completely converted.

Textured for sure. Smooth caps feel a bit sticky to me – probably since I type with the pads of my fingers versus the tips. Since there’s a bit more surface contact when I type, when I lift my fingers, I can feel my skin sort of rip away from the top of keycap pad at times.

I’m happy there’s such a variety. I guess I tend to prefer some texture to avoid the racing-slick effect I get with otherwise gorgeous smooth caps like SP SA - but rough texture less so. I brush my thumb on the spacebar, and really smooth ones are too grippy on my thumb and throw me off.

My favorite right now is MT3 (funny because it was planned to be smooth and the factory was like “woops well that’s how we made the tooling”) - it has enough surface variegation for my clammy hands not to grip too much, but the peaks and valleys of that texture are more round than sharp - just right.

New gmk keycaps have more texture, but I prefer typing on shiney gmk keycaps. I guess I am in team smooth.

I think what’s interesting about smoothness is that it was my understanding that smoothness of surface costs money. I mean, everything about tooling tends to be expensive, but to have a smoothness, even shine, can get even more expensive.

This seems like an ideal place to link a comparison of some very similar caps, one of which appears to be a retool of the other. Specifically, textured caps from the Atari 800 XL, and SP SA R3: 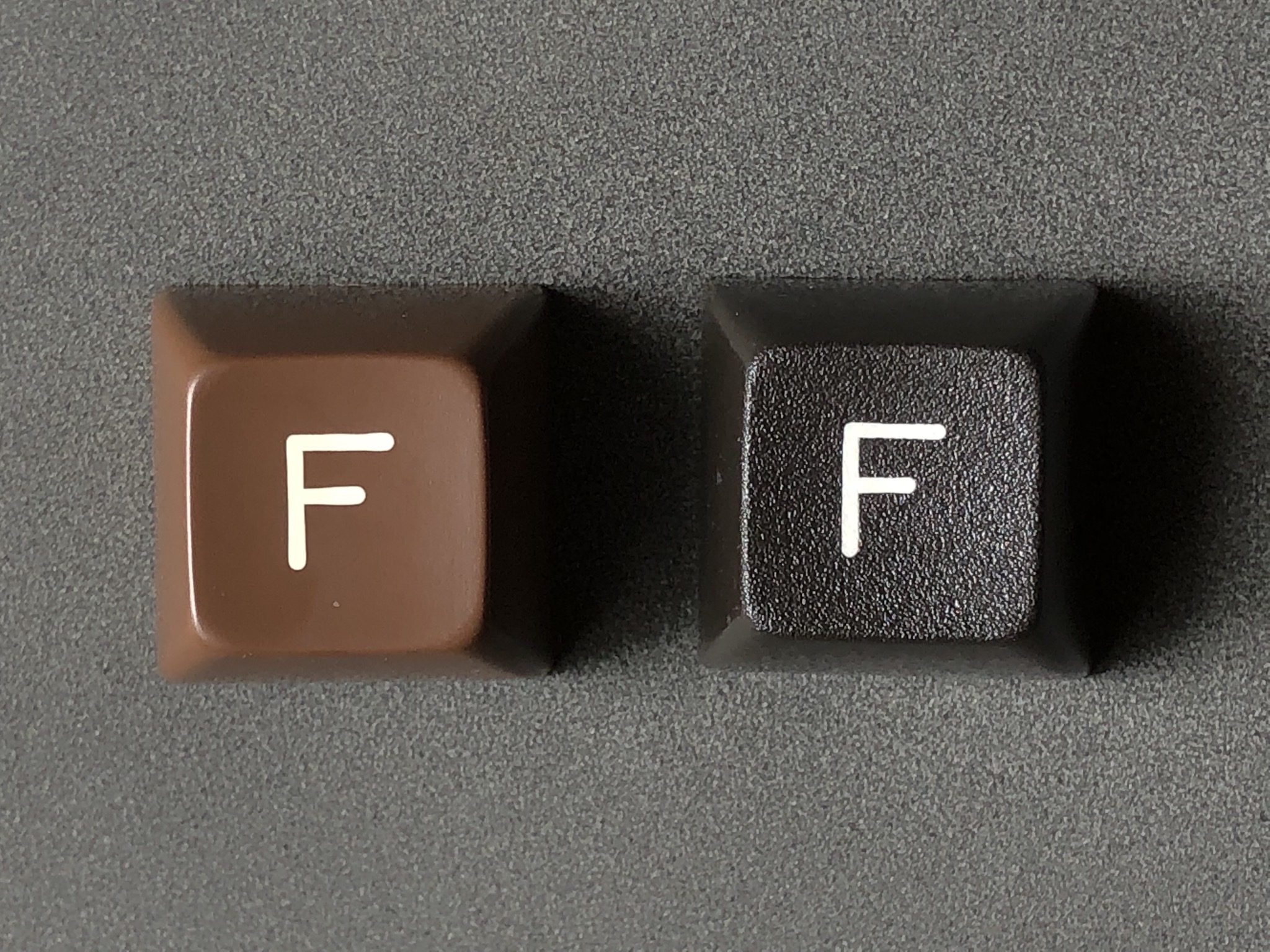 Which would make some sense if you think about how the tools tend to break down over time. You can likely get to a point where the smooth surface is no longer consistent and maybe not possible to recover. However, you can give the surface a sandblasting and you likely can get more use out of it.

Educated guesses on my part though.

I think it could go either way; add texture with sandblasting, or remove it with (difficult) polishing - that’s what I think SP did with the old tooling it re-purposed for SA.

Cutting away more material from the tool leaves more on the cap; which would explain why the SP caps are thicker than the 800 XL ones: 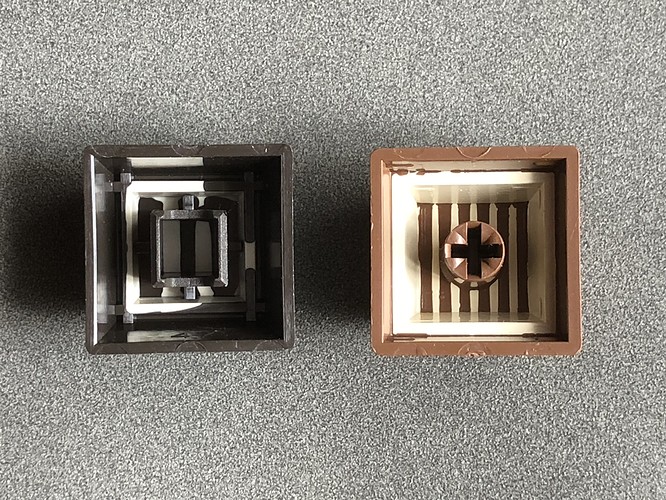 It might also explain the mild wiggliness of the line-weight on the SP example.

I must say I’m really enjoying using OG Cherry dubbelshot. Feels much smoother then my GMK but without that noticeable shine.

Well now you show me that picture! 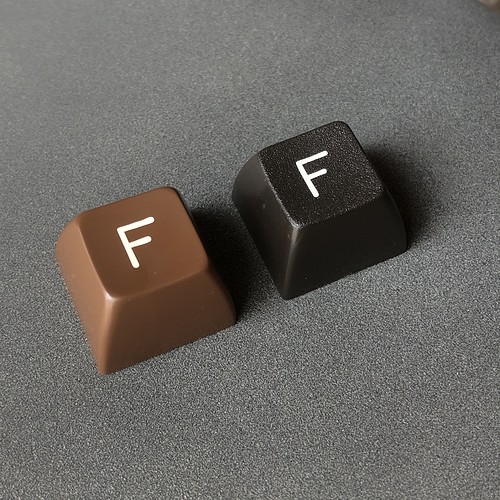 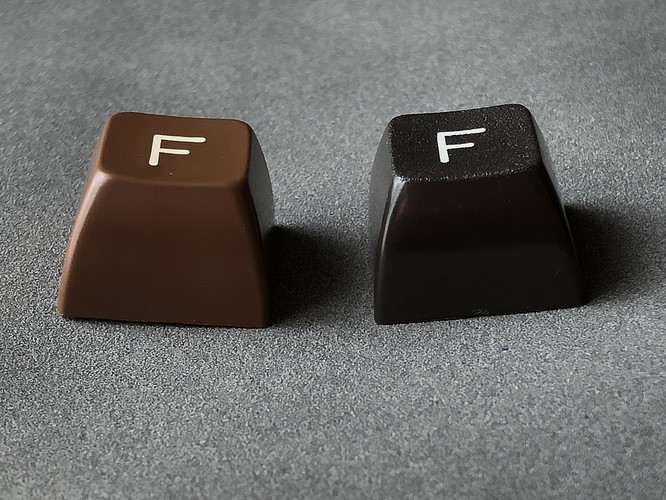 Textured caps on the Atari 800 XL: 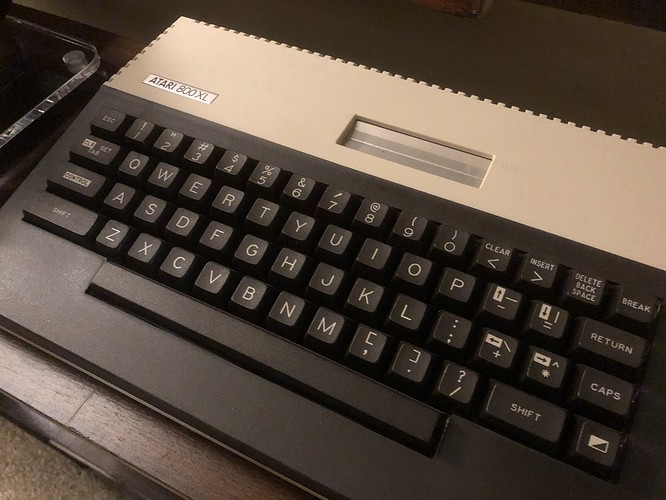 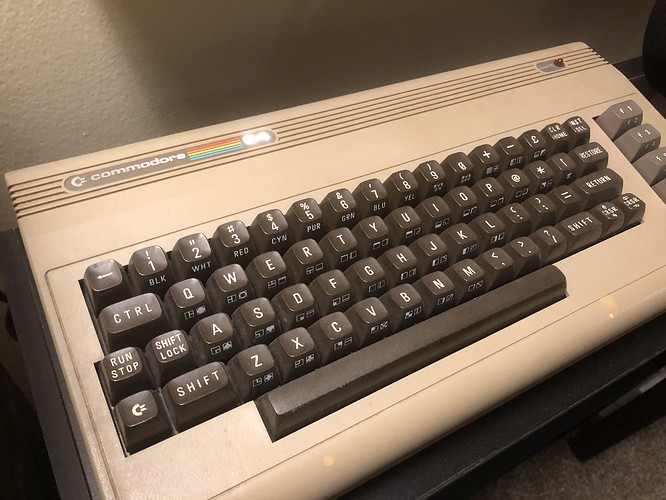 These pics are from a thread where you and I were musing about a potential MT3 Retro that didn’t exist yet. Ha! 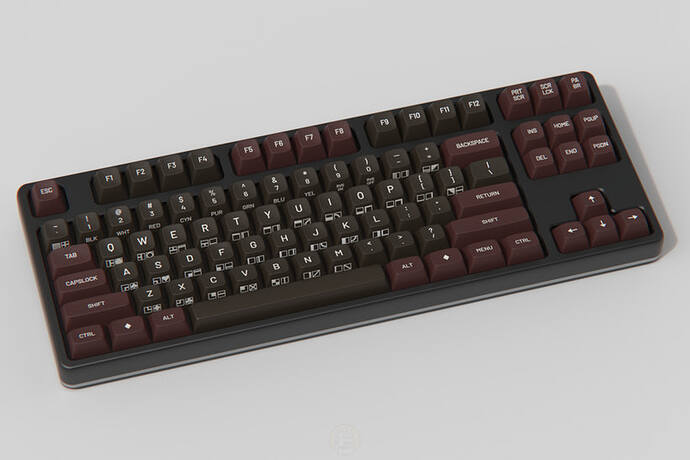 Edit: while trying to find out exactly who made those 800 XL caps, I found out that model shipped with a variety of switches - my example having either a Stackpole or Hi-Tek switch grid. Haven’t figured out who originally made those caps yet.