Things that make us go... hmmm

Here’s a thread to throw shade at things we don’t like, don’t understand, or just look at and go… why.

IT DOUBLES AS A MELEE WEAPON

but also, just look at those weird-ass keys. To quote chyrosran22, it’s HIDEOUS.

Okay but as long as you give reasons why you don’t like it. We’re not going to have a thread about shitting on products we don’t like

I actually like it. If I were into ergo boards I would likely buy one.

Okay, point totally taken. If it’s too negative then let’s kill it.

I appreciate that this layout has a realistic assessment of human, or at least my, fallibility: 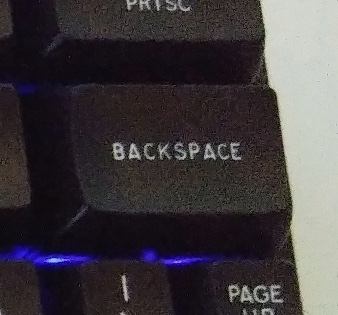 I think I’ve got one that’s not too negative (at least not towards anyone or anything in the community) but still fits the theme… from a review I wrote years ago on Wal-Mart’s website for a generic keyboard, sold there as the “Onn Soft-Touch” - 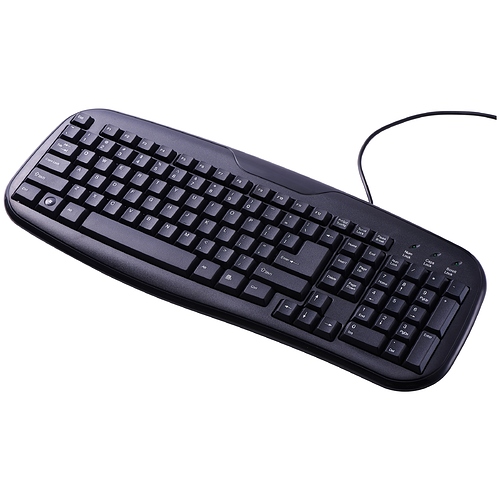 This is one of the least pleasant keyboards I have ever used in my life - edged out only by the floppy “roll-up” style portable ones. This is a genuinely disappointing typing and gaming experience.

Basically, it’s hot garbage, but it will do in a pinch. So why do I call it “inspiring” ? Simple. It inspired me to buy a mechanical keyboard. That board I am extremely satisfied with and will use for the rest of my days. Extra star just for that!

edit, in case it gets lost in interpretation: this is purely an observation about the layout, I am not in any way trying to trash the Austin

Ugh I feel bad to have earned the “popular link” badge for this negative content. Maybe we can transmute it like @cijanzen mentioned. I will edit the title.

Haha no worries. There are definitely designs or ideas that make us all ask, “WTF?”
Seems pretty lighthearted still and even a nice way for people to chime in and share their perspective about why things we don’t get the appeal of might actual appeal to them!

Well, since we’re on the subject—I don’t get the Alice design. It just looks broken to me. I was looking forward to trying one out at a meetup, then COVID hit.

These things are quite popular. Are they really that good? Are there actual benefits that you’re seeing and feeling? How much time did it take to acclimate to the layout?

I’m a traditional touch typist and I have never used a wrist rest. I’m very curious as to whether this is a design that is going to stick.

I’m the same in that I’ve never used a wrist rest (if you’re typing properly you shouldn’t need one) and have pretty good technique when it comes to typing. The split layout might look a little weird but it’s actually a step closer to better ergonomics. It’s a compromise between going full split and perhaps adding a tilt on the X axis but the angle helps to open up your arms which thus opens up your chest and back. This relieves some strain from the unnatural angles our arms and wrists are contorted into to try and type on a standard keyboard.
It took me less than a day to feel comfortable with the layout as a touch typist. It’s really not as drastic as it seems especially if you already have good typing technique.

As for the aesthetic, I thought it was a bit weird at first but I’ve grown to like it. Probably part of that warming to the design is because I then knew how much more ergonomic it was and I think it’s a very nice compromise.

I was just looking at my G512 today… Logitech board. Has RomerG switches.
So, the brushed aluminum feels great. There’s that glossy G logo on the right upper side.
LEDs look good, the board feels solid, plastic base is superb, feet are sturdy, there’s channel raceways under the board and there’s a USB pass through.

Then why the hell do they cheap out on switches and keycaps? Would putting in something like simple Gaterons up the cost so much???

Literally 99 out of 100 I would not put on my keyboard if they were free. But they’re expensive.

A few of the simple ones like Rama’s are okay I guess, but most are tacky.

Why? I can honestly say I’d prefer a kbd67

I occasionally see people in interest check threads ask designers to put a big fugly logo on their keyboard where there wasn’t one before. Inexplicable to me.

How I manage to never pay attention to keyforge sales quick enough and I still don’t have a shishi. I just don’t understand how that artisan looks so nice.

These things are quite popular. Are they really that good? Are there actual benefits that you’re seeing and feeling? How much time did it take to acclimate to the layout?

There’s a few things here. I have one of the wonderland ones, and used it as my work keyboard for several months, here’s my take. I think part of the reason for the popularity is that there is almost no acclimation time. Within like half an hour I was doing just fine typing on it. However, I found that while it was fine for work I couldn’t game on it because the keys weren’t exactly where I expected them to be. That would have taken a lot of acclimation I think, and it just didn’t seem worth it to me. As far benefits, I see and feel none. It’s nice to type on, but it’s not so much different from a regular keyboard that I notice much at all. Really your hands are just like an extra inch apart and it’s tilted a little bit. So to answer then ‘are they really that good’ I think it depends how you look at it. I think the popularity come from the ease of switching and the different look and aesthetics, but I don’t think the layout has any real benefit other than that. To me the answer is probably no. I like the board I have, I’ll probably continue using it, but I don’t really like the broken look and probably won’t get another one. These are just my thoughts, maybe someone else has different ones, I’d love to hear other people’s takes.

Literally 99 out of 100 I would not put on my keyboard if they were free. But they’re expensive.

Artisans are difficult to judge until you try to make one yourself. Theoretically, the ability to cast your own caps means you’re never at a loss when you get the odd board that requires some goofy configuration that nobody supports for cap GBs, so there’s the practical impetus for trying your hand at it.

So far as I can tell, most artisan collectors aren’t planning on ever putting their artisans on a board. Max, they might have one or two carefully matched for colorway, but the vast majority go straight into an Evil Box and are sorted by maker.

Also, from where I stand on the sideline, it appears that every collector spends a lot of time making friends with other collectors. It’s not about buying, selling, or flipping, it’s about trading.

And, nobody ever starts in with artisans trying to acquire everything. It’s always a case of, “man, these things are so dumb, but THAT one RIGHT there is super cool, and I totally want it, here’s my money.” It’s a slippery slope from there.

And, they are pretty, sorted for color and maker, each one made by hand with skill. To really see what’s going on you kind of need a magnifying glass or a jewelers loupe.

FWIW, I have one artisan on my main board, and it was made by my son. It is from when he first started making them, he hated his first design and so far as I know, he only made two and I asked for the second. To me, artisans are much more about the personal relationships I’ve made than the actual object. More like individual tokens of esteem.

I have to say if all that is true I ‘get it’ even less than I thought I did before. Thanks for the insight.

Personally artisans for me are just like extra little touches of personality.

I was a huge Pokémon head growing up as well as Runescape.

So now I have S-Craft Starters, a VN Cap Squirtle, and some Barrows Brother’s Helmet artisans. I rotate them onto my board depending on how I’m feeling.

It’s cool to look down and be like, “Yea this board and these keys are all what I like,” and it also serves as a conversation piece.

I sort of equate them to sneaker collecting. Some people want something cool they can wear as an extension of their preference, but others just want to collect things that look cool or are rare.

Ditto on the Pokémon. Want to get my hands on a Gengar cap so badly. Gengar and Shishi are the only two artisans that I really want.

My kid got this in the mail maybe a month ago. Immediately, but not inexplicably, Judas Priest started playing from thin air, the earth parted under the driveway, and the Prince of Darkness rose up on an awful elevator to give him a terrorist fist bump.

Since then, he has acquired maybe four more but in different colors. 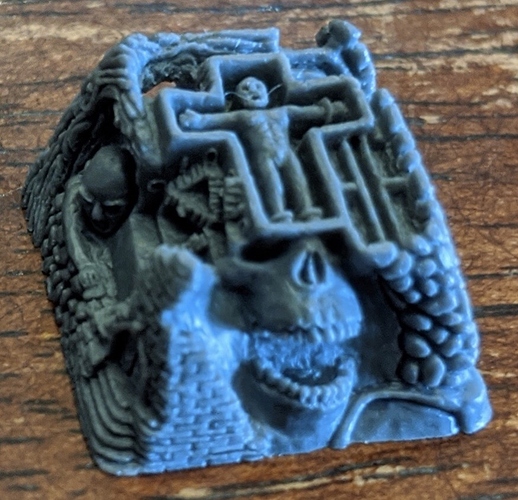