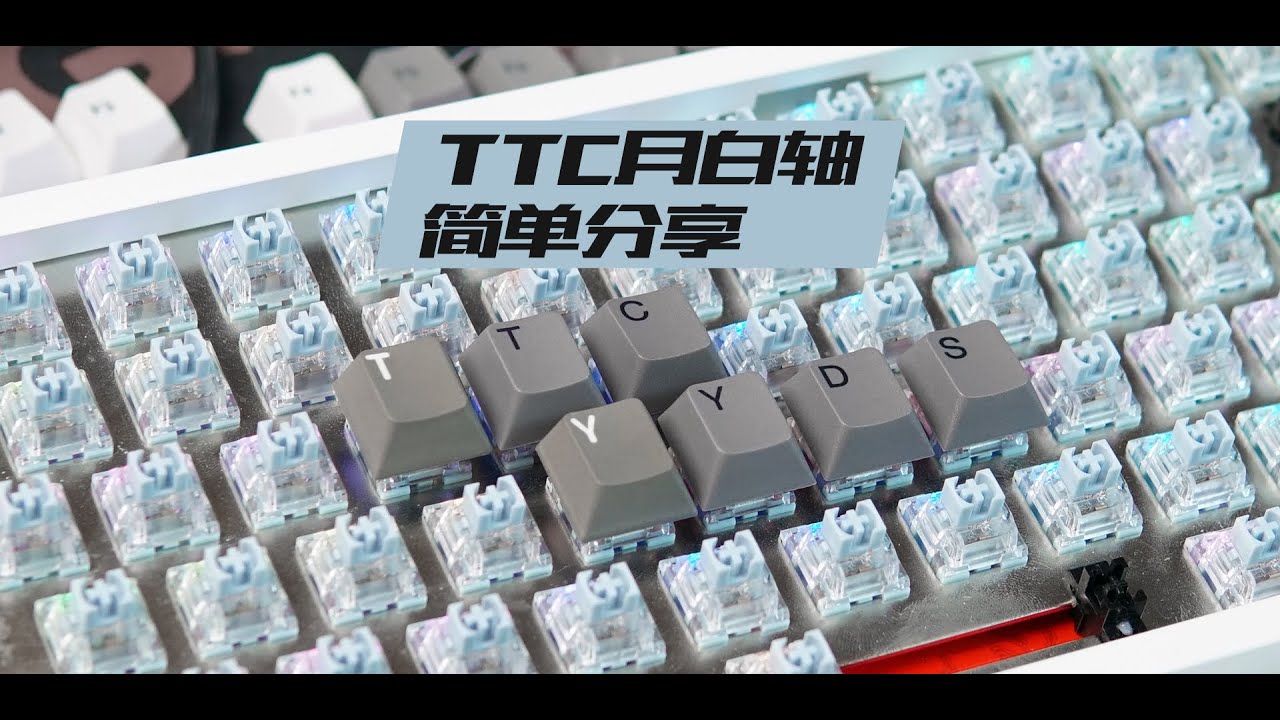 I’ve got some of these coming at some point, but I’ve been poking around looking for information about them. The main curiosity is that spring with the center coil; I’m not sure if it might impart any interesting qualities or not but the switches do seem to have a nice plocky sound. (Thanks to the creator of the video above; I can’t understand the commentary but find the demonstration useful.) 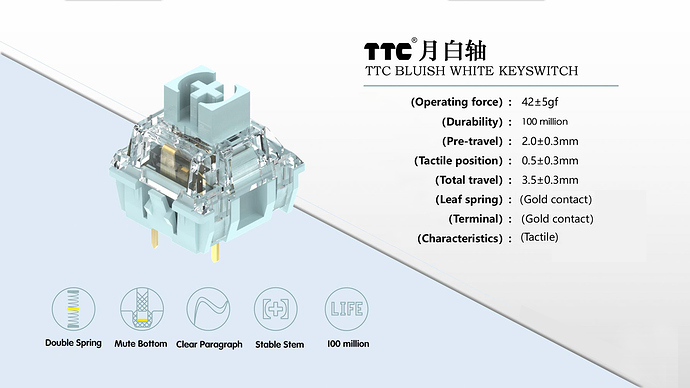 According to this graphic, these have a “mute bottom” which I took to mean these were in TTC’s silent family - but they don’t sound quite like that from the video, so I’m not quite sure what these are supposed to be. I was pretty surprised by how much I liked the TTC’s on the little tester I got - and since then Gold Brown V3’s have been all but unobtanium - so I jumped on these while I’m waiting for those. (They’re currently stuck in a Sisyphean cycle of ever-receeding ship-dates…) 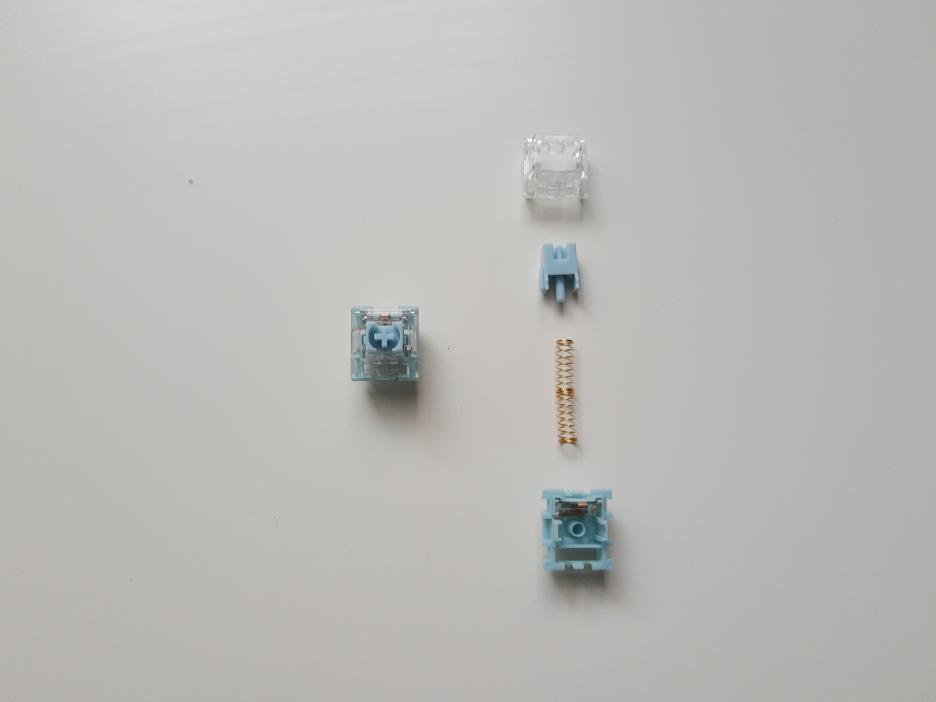 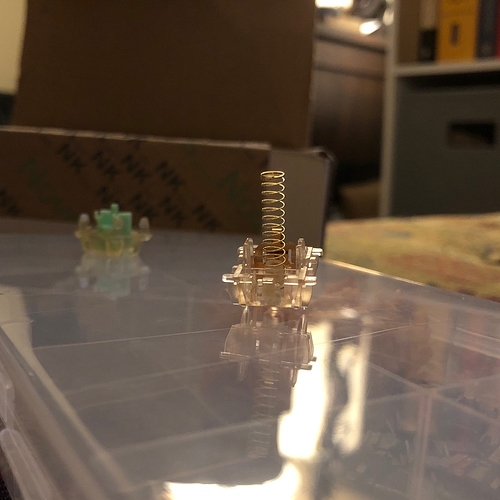 This is a completely different weird spring, from an NK Kangaroo. …almost immodest, isn’t it?

Anyway. I’ve been having fun with springs, the weirder the better - so I’m definitively looking forward to fiddling around with these “double” ones. I’m curious to see where they fit-in with spring styles like short / fast, long / slow, progressive, complex, etc…

Comparing it with this one which stops like a wall, I wonder if that steep incline on the top one around 3.4mm is the “mute bottom” and I wonder if that comes from that extra coil in the spring. The two graphs aren’t the same style so who knows how much interpretation is going on in there, but I can tell you that the Gold Pinks do in fact bottom-out like placing a rock on a glass table, with an abrupt “clink”.

Just speculating, but one or two combinations I’ve tried had a sort of “cushion” at the last little bit of travel, presumably the spring coils becoming compressed enough to touch and just start to bunch - I’m wondering if that effect is being reproduced intentionally here.

I’ll let you guys know what they’re like when I get my hands on some - but in the mean time, what do you think?

Long springs like the gold pinks, very interesting! I have heard from people who have used gold pinks that they feel much heavier than the rated weighting. I wonder if that rings true for these as well?

I’m happy when manufacturers provide graphs so we can eventually test and see how accurate are those really?

Seriously. They seemed to be schetched out from perception or worse yet marketing, rather than actual measurements.

If the spring works as advertised, I would imagine that It would work better in linears than tactiles (at least for me) as a it may reduce tactility. If those spring weights weren’t far too low for me, I’d consider picking some up to try. I do appreciate people trying to innovate however.

Yeah, 62g is my lowest limit for mx springs usually… but maybe this new spring would change that. Seriously considering getting some when they go to group buy.

I mean I feel like slow springs definitely feel harder than their rating for me personally, at least that’s how I perceive them, compared to a standard 14mm spring. I really wanna try out the gold pinks at some point.

It’s funny how heavier they feel at the same weight as their shorter counterparts by shifting some of the force towards the top of the press where your fingers have no built up momentum. On the flip side, progressive springs feel crazy light even at heavier spring weights.

So far, Gold Pinks remind me of lighter Gat Yellows, but made out of much harder plastics all-around. They feel a bit more smooth out of the box but bottom-out is a little on the harsh side unless you type lightly.

So has anyone else tried the bluish whites? They’re 48 cents on taobao, so I might just order some for a future build. Seems they’re silent-ish but not really. Maybe we’ll see an mx variant of damped alps?

same price on KBDFans as well. Curious but they seem too light.

I see now. It looks like there is a dampener in the base where the center pole hits, but no dampening in the top. So the sound is all on the upstroke? That will not be great. I’ve modded some switches like that before and it feels off.

Not sure when they’ll arrive (sometimes KBDfans takes a couple months, sometimes only a week), but I do have some of these coming at some point. I’ll post here after I’ve had a chance to check them out.

I’ll keep an eye out for this! I’ve been eyeing the Wild ones from Matrix so I’m curious to hear your thoughts on the spring

The matrix switches are confirmed to be gold pink recolors, so might as well grab em off taobao now in case hype tax comes running over next year the same way it did for jwk-s.

Disclaimer: I sell these double coiled springs on their own.

I can tell you even in Asia the manu’s are 50/50 on how much of a gimmick. There are people who swear by its pre-loaded effect. Reducing absolute difference between bottom and initial. They definitely feel more even to me than say, a TX spring.

I have got a dozen of bluish whites today.

My first impression is that they have a very pleasant preload, with relatively low bottom out and high entry weight. Also punchy top-out.
I noticed that there is a substantial stem wobble and the overall sound is not consistent.
The sound is also loud, reminiscent of holy pandas and pleasant to my ears.
Scratchiness is present but not horrible

I received mine recently. I haven’t mounted them but first impressions regarding the impact of spring: The bottom out is not harsh, quite muted actually almost like Zilents without the rubber mushiness. The return clack is so much louder. I believe if you lube the top housing, you can have a fairly muted switch.
I would say that the tactility is more prominent than Ergo Clears, but not as prominent as Zeal tactiles or T1 tactiles.
The housing is super tight stock, but opening the housing will cause some bit of wobble. It’s not super smooth so I guess lubing might improve that.
Will update once I mount them.

I made the obvious mistake of pairing an order of normal items (including these switches) with a pre-order item, so all of the stuff is held-up until the pre-order is ready.