Turning 39 tomorrow, not sure how to feel about that? 😟

I’m getting old guys… Not the best feeling, but thankfully I have done hard labor my whole life to make a living so I’m still kicking strength & endurance wise. Not sure how long that’ll hold out though since I was living pretty hard for quite a few years too. I guess I should just keep looking on the brightside that I have my health & consistent employment right now, although with 40 being a big milestone age & coming up next year for me I can’t help to start thinking about things I need to do to set my future up better than it is now.

Anyways sorry to rant guys, just needed to vent about it a little & figured here would be the best place to do that. Getting old sucks guys take my advice, do what hobbies, activities, or whatever makes you happy as much as possible & ignore the opinion of anyone negative towards what you love! Trust me it makes life just that little bit easier when you stay true to yourself as much as possible (I get it some have jobs that pretty much force them to have double lives, so no hate there. We all gotta eat & support our families!)

But as someone not necessarily among “the youth”, but also not salt and peppered just yet, I hope you can still see some of the positives. I know you mentioned health and consistent employment, but I think you should look past that.

You have hobbies, passions, and flames that you have the chance to explore now that may have been difficult for you to explore in the days of Rob27shred’s youth. Those are what are worth celebrating because life isn’t the big picture (I think), it’s the play by play moments of your life.

. But what do I know, I still like to live a bit young, dumb, and broke XD.

Happy Early Birthday! I hope it’s a great one!

I do understand the fealing it makes of getting older, and seeing its physical abilities geting weaker other time.
But you also gather more and more achievements other time the more you get old, beeing personal or professional.

And you are right to say that lying to yourself just to please or have acceptance to everyone is not a good thing to do. Be yourself and accept what we truely are is the key to happiness.

Believe me, getting old is not as bad as it looks

From someone who will soon turn 49

Thanks for the replies guys! Very good point of trying to make more of the little joys in life than focusing on the big picture sometimes @Manofinterests! It is easy to feel overwhelmed when thinking big picture & messing with my boards or playing a game always gets my mind off it. Also @Rico I do agree it’s not all bad getting older, I’ve definitely learned more, experienced more, & made much better connections with people in my last 20 yrs. vs my first 20. Although that’s kinda a given for everyone, but I think you’ll get what I mean. It’s just a little conflicting on how to feel about getting close to your second half of life to me. Exciting, scary, uplifting, & depressing all at the same time, LOL!

I think you guys are right though, just keeping it positive & trying to not bury yourself under the big picture all the time seems to be the way to go (huge under simplification, but you get me

) Thanks for the kind words & happy early b-days!

Edit: @Manofinterests, living a little young, dumb, & broke is one of my problems too so I 100% get you on that. I never shirk my responsibilities, but saving is something I’ve always struggled with.

You know what? You should feel amazing about it. You just need the proper perspective. I offer the following excerpt from Neal Stephenson’s Cryptonomicon:

Let’s set the existence-of-God issue aside for a later volume, and just stipulate that in some way, self replicating organisms came into existence on this planet and immediately began trying to get rid of each other, either by spamming their environments with rough copies of themselves, or by more direct means which hardly need to be belabored.

Most of them failed, and their genetic legacy was erased from the universe forever, but a few found some way to survive and to propagate. After about three billion years of this sometimes zany, frequently tedious fugue of carnality and carnage, Godfrey Waterhouse IV was born, in Murdo, South Dakota, to Blanche, the wife of a Congregational preacher named Bunyan Waterhouse. Like every other creature on the face of the earth, Godfrey was, by birthright, a stupendous badass, albeit in the somewhat narrow technical sense that he could trace his ancestry back up a long line of slightly less highly evolved stupendous badasses to that first self-replicating gizmo-which, given the number and variety of its descendants, might justifiably be described as the most stupendous badass of all time.

Everyone and everything that wasn’t a stupendous badass was dead.

By virtue of making that post, you are alive, and therefore, a stupendous badass. By virtue of being older than you, I am pleased to welcome you to the club.

Being old is not easy and it never gets better. Little joys, like mechanical keyboard hobby, helps. But what’s really important is, like @jshufelt said, which perspective you adopt to make the most out of slowly ever worsening situation. Anything positive will do as you can always change later.

From someone facing 59 in a few years.

I feel ya, I’m going to be 35 soon, and working essentially a desk job, for the last 9 years has taken it’s toll. I don’t have the endurance, that I use to, but I’ve been able to accomplish other goals, that wouldn’t have been possible, when I was working as a motorcycle mechanic.

Part of me wishes I wold have just become a plumber, when I got out of high school. Plumbers make good money and their always in demand. lol

Hope fully you have a fun birthday! 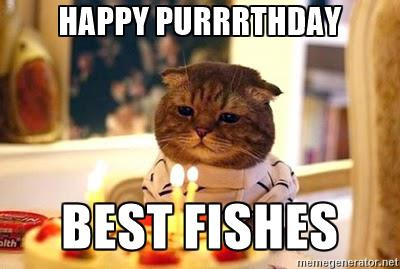 Happy birthday and welcome to the club! I’ll be 40 this year and I gotta say it’s not so bad. Like you said, as long as you do what makes you happy and keep an eye on your health and finances, you’ll do well. <3

Happy Birthday! What’s one thing you wish to tell your younger self? I’m turning 25 this year and still learning how to adult, so any insight to what lies ahead is welcomed

Also time to celebrate by building a new keeb!

Happy birthday Rob! I don’t have any extra wisdom for you, but I hope you can shake off the negative thoughts and enjoy your day

Happy Birthday Rob! Aging sucks, but at least you’re one year closer to being able to act crazy in public and get away with it (even if it’s just to mess with the youngins).

Thanks for the well wishes everyone! I’m still at work right now, but will read & respond to the posts I haven’t yet when I get in.

Happy Birthday Rob! All the best and always remember you have also become a year more experienced

Happy birthday! I turned 42 this january and just went back to school. Pretty low on money as a student, but it has already been the best thing I have done for myself in the last 15 years. Next year I will be a 43 year old junior developer.

Happy birthday.
I’m 44, if that makes you feel any better

happy b-day. Need to celebrate by buying some keyboards!

I’m 43. Seems like there’s a lot of us oldies around here. The only downside I see to getting older has been needing glasses! Live it up!

Yeah, I’m 55 and came into this hobby via my oldest boy. I’m probably not as into it as he is, I only wanted to learn enough to make a bee-line to my happy place (which turned out to be heavy clicky switches with high profile caps).

I think what Rob is experiencing is a mid-life crisis, and the only cure is a red sports car. It’s pretty typical for men this age. Mine resulted in a complete career change at 36. After a while, you reconcile to being on that downward slope, and don’t worry so much about it.

Happy Birthday, dude. It’s a long, strange trip for everyone.

As others have said, getting older isn’t all bad. I’m 41, and many of the things that matter most to me have taken many years to achieve and happened in my 30s like building a family, growing a business, and finding cool hobbies like this one to tickle my brain and keep life interesting… and we’re all in this together!

Happy Birthday! What’s one thing you wish to tell your younger self? I’m turning 25 this year and still learning how to adult, so any insight to what lies ahead is welcomed

Also time to celebrate by building a new keeb!

The one thing I would tell my younger self is to save more than I did (which was near zero till about a decade ago). If you’re already stashing a little bit away here & there you’re on the right the path, but if you are like I was try to start saving $10 to $20 per pay. You’ll be amazed at how quick it builds up if you keep doing it & just ignore those funds. Maybe even be really smart & open up one of those long term/high interest saving accounts. Still treat yourself to your hobbies & that, but try to save even if it’s just a couple bucks every once in awhile.

Just remember, you’ve survived 100% of all your worst days. You’re killin it in life right now. Keep it up. brother.