What are you playing today?

Figured since we have some ever green topics around what you are listening too, or what is on your desk, etc. Why not one around gaming?

What games are every one playing these days? Console, PC, table-top, anything that is game-ified.

A recent COVID project of mine was to mod a GBA with an IPS screen. I went down (and in still in) a rabbit hole around retro handhelds and restoring them. A podcast I listened too recently did a community play through thing around Final Fantasy 6. I am giving this a shot on the GBA.

To be honest, I remember liking this game and playing it when I was younger, but I am not really sure it holds up now. The enemy encounter rate is pretty high. Playing on a handheld helps since I can be distracted by something else, but it is still a little annoying. I am going to try to stick with it a little longer for the podcast, but it is really not grabbing me as much as I thought it would.

I don’t have that much time for gaming anymore so when I do pretty much all I play is league.

Baba Is You is my current 10- to 15-minutes-a-day game. It’s a pretty fun puzzler that requires a healthy dose of lateral thinking.

I gave HoTS a try recently. Still a fun game, but I only paid for like 4 hours before rage uninstalling. Mobas can been fun, but not solo. I tend to want to play support or healer roles, and you can’t carry a team like that. It just leads to a lot of loosing.

I have heard really good things! I have also heard that it can be pretty hard, and you can kind of hit a wall on some of the puzzles.

I actually thought hots was a lot of fun and played it a bunch a couple years ago, I liked the way they did the skill progression with leveling up and had the various maps (although some of them sucked). I pretty much only played it with my friends where we would be the whole team though.

To me it is “Babie’s first Moba”, but I think that is a lot of the fun of it. LOL kinda of lost my interest when the store got really big. Having to memorize and deal with that meta just lost me. DOTA2 swings even more in that direction. I am not sure if it is still this way, but the idea of last hitting your own mobs to prevent the enemy team from getting them just didn’t sound like something I wanted to do.

HoTS streamlined a lot of things and most of the matches stick to ~20 minutes.

Well, I haven’t been playing much lately, but the last game to make an impression on me was ECHO, which I think I’ve mentioned somewhere here before.

This meme sums it up well: 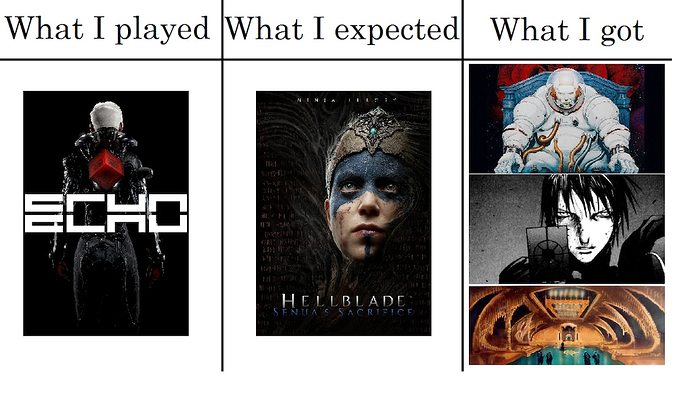 Basically, mash-up the concepts of a stealth game with the manga BLAME! and you get an absolutely fascinating setting with some decently novel gameplay - and a pretty creepy twist early on that sets-up the game’s logic.

I’ll throw out there Hellblade was pretty rad, too - if for different reasons.

I’ve been playing way too much Apex Legends recently, since none of my gaming buddies wanted to play Rainbow Six Siege, but now they don’t play Apex with me either

so I solo que into the void.

Some levels seem hard until you solve them, and you say to yourself, sheesh, how did I not see that? It’s that kind of game. For that reason, I think the game lends itself to playing in short durations. Time away from a level helps alter my perspective and inspire different approaches.

tbh Ubi fecked up siege and went from tactical shooter to utility game.

Theres still a lot to love, from the 5 years of continual service on the game, (something I don’t think Ubi has done with any other game) to the unparalleled level of destructibility on the maps. I will admit the emphasis on gadgets and operators abilities has only expanded alongside the roster of operators, it would be nice to see a much more paired down version of the game that keeps the graphics, maps, and engine, but replaces all the crazy character abilities with either a more basic class system or a more in depth loadout customization structure.

I’m a fan of strategy games, so I find myself playing them quite a bit whenever I have free time. Usually I’m playing…

If I’m not playing one of those, I might be playing…

Risk of Rain 2 is awesome! I loved the original, but I was so glad to see the sequel wasn’t another Rogue-like platformer, the continual release of new content and the overall polish on Risk or Rain 2 continue to make a very enjoyable experience over many runs.

I have put 31 hours into stellaris in the past 4 days.

I do this stuff when i start up Anno. Sink a whole weekend in then wait a few months again. I mostly play Valorant or Valhalla in the evenings

I have never played a Total War game, but the Warhammer ones look so cool!

Never heard of this game, but this looks like a trip!