Every time I visit the deskthority thread I get hyped again. This morning I was treated to a neat factory video and an impressive pile of boards (How much must all of them weigh? Look at that neat visual perspective!) The scale of money, time and effort Joe is putting in here is apparent. This ain’t no typical 250 MOQ group buy.

Rukia (I have faith)

I hope you’re right, but I wrote that almost $500 off awhile ago myself. I tried to stay positive at first, but the more wild & unbelievable Jaxx’s excuses became for not showing anything the more I felt something was up. Then Gondo basically blew his spot up on GH with the fact that PCBs had not even been ordered well past the original projected delivery date. That’s what sealed the deal in mind, why in the world would he not have PCBs (or not have even paid Gondo for his work on them) if the GB was something he actually intended on delivering?

Honestly at this point I’d just like to know what really happened with our money. If Jaxx just fucked up & wasted the money trying to get the GB to completion I can live with that & forgive the guy. The road to hell is always paved with the best intentions. Although if the GB funds were used for his CNC or ice cream machine & he thought he could rob Peter to pay Paul without anyone being the wiser, well I have a huge problem with that.

It does the same for me when I see an update in GeekHack thread.
This project is just something else as you said.

Still waiting for the first keyboard and keycaps I ever ordered via group buy:

That’s all fair. Just not much we can do but hope, lol. I actually joined another GB that is completely dead, so at this point (was actually a kickstarter for a keyboard), shame on me for being a poor judge, lol.

I do earnestly think that Jaxx is trying though - he doesn’t have much reason to even give his last update if he intended to ghost everyone and keep our money. I think we’re all well beyond the chargeback period.

I do understand the want for more transparency, but I’ve seen how ridiculous people become when they don’t get what they want when they want…especially the keyboard “community”. Anything Jaxx says would just be fuel for the trolls; some people just want to watch the world burn - and judging from the past couple of years, it’s a lot more people than most realized.

If it doesn’t come, lesson learned! If it does, yay!

If I could go back in time, I would have gotten a Veracity Steel Heavy Grail, but I missed that boat :’(

Damn, it really doesn’t feel good going that far back in the ol’e receipt folder lol. Not counting stuff that was recently purchased, like some newer keyset group buys.

I’m floating in that same Rukia boat. I could easily forgive the guy if he gave an explanation, and delivered the boards (at some point).

I reduced my group-buy participation by quite a bit as lead times grew. That said, here’s what I’m waiting on before I take a break from the hobby for a bit.

Like a lot of y’all, I mostly stopped buying into GBs/pre-orders. But, you know, there’s always an exception lurking around the corner… 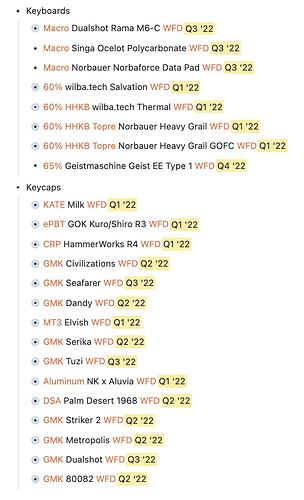 Geezus! That’s impressive. Your level of detail and patience is second to none.

I’m still holding out hope for the Baldr60 and Freebird60 cases. One day, I hope.

Man I wish had your organizational skills. I keep remembering more things.

Two more on the long waitlist.

I think the absolute easiest way to keep track is through email labels, like this: 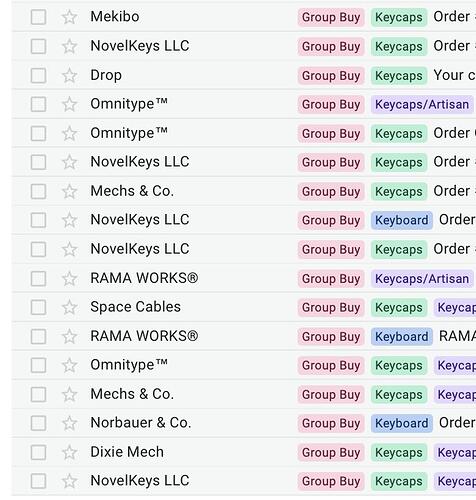 Because you can just slap a label on as soon as you receive an order confirmation.

I keep the following labels for keyboard stuff:

LOL, I’m sure most of us have points where our lists were similar to the length of yours. Lord knows I have a few times. Although yeah as lead times blew up I started getting really picky about what GBs I’d join.

I keep my list on a post-it note at work… 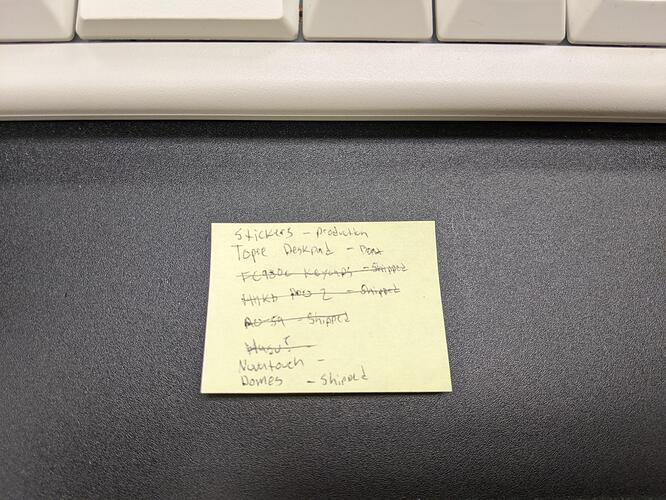 I keep them in a folder in Thunderbird and I mark them with labels.

I also follow topics on GH to have notifications and news about running GB I’m in, pretty efficient.