What did you learn today?

Skills like these tend to find you out of necessity

I learned that keeping open drinks near keyboards is never 100% safe. I’m normally very careful about this sort of thing —I never keep a drink on my desk or next to a keyboard or computer. That’s why I had a mug of ice coffee on the floor away from everything, or so I thought. But today I was distracted and ended up kicking the mug over with enough force to send coffee into two or three keyboards on a nearby shelf. It wasn’t a lot, thankfully, but I could see droplets down in between some of the keys, so I have disassembled them and dried them out as best I could with q-tips and compressed air. None of them were plugged in, so I am hoping that if I wait long enough for them to dry they will be okay, but liquid spills are always unpredictable.

I hope they all turn out alright

They seem okay thanks. Honestly it was a close call, but at least now I know that I need to be more careful

I hope they all turn out alright

Edit: follow-up learning: I can simply trim the offending pin slightly and it fits! A bit scary since there’s a chance of messing up the leg entirely somehow (yes I tend to catastrophize), and it’s not fun to do this for a board’s worth of switchs. But at least there’s way.

Not keyboard related but I learned something important today. Mixing baking soda into super glue creates a REALLY strong bond that’s good for attaching broken pieces of plastic back together.

But more importantly, no matter what some guy on YouTube says, do not mix them together with your finger. It gets really hot really fast and you do not want the entire tip of your index finger turning into a giant blister. Not fun.

But at least I fixed my recliner so I can lean back while I wallow in my regret.

Today I learned that there are tons of materials for sound dampening your keyboard, but foam is the best. Not rubbers not nitrile.
Now I am confused between EVA foam and Silicone foam… And about where the foam would go, between PCB and plate, under PCB with the case, or both. And what thickness I need.

I wanted one. And I got one! The entry edition. So stoked.

If you are going for pure silencing, plate foam and case foam together is going to be quietest.

I’m not the biggest fan of silent keyboards or switches so I generally opt for no foam or only foam in one position or the other to “fine tune” the sound of the switches.

If 65’s are the basic-b thing to be into right now, well boot up my Atari up and print “HELLO WORLD”.

The NK65 isn’t even in my top 5 for the form factor - but both versions occupy a class of their own within the wide gulf between most pre-builts and high-end customs.

Cycling simile: It reminds me a bit of the Bikes Direct roadie I used to ride; way better than anything in a department store - but way less quality control, care, and consistency involved in the final product compared to the Specialized / Cannondale / Trek I may have originally been interested in. (It was a “Motorbacon” Knight, if you’re curious. It had a mix of excellent and garbage tier components, and might as well have been a set of wings for the fun I had on it.)

That said, though - this particular situation is one where I might opt to pass on it anyway, despite it ticking most of the boxes for a keeb I’d want. That’s because there’s an unusually good pre-built readily available that, at least to me, appears closer in quality to the NK65 than the NK65 is to truly premium customs - and they can be had with an aluminum case for about $90 less than the alu nk.

The prebuilt I’m talking about is the Durgod Hades 68. If you’re not familiar with it and are curious, there are some good reviews up from Tae Keyboards, BadSeed Tech, and Brandon Taylor among others.

I prefer its typing angle and less sharp design, but some negatives in terms of a project board are that it has a pretty cheap plate, is tray mount, and at that price already has meh switches soldered-in as opposed to being a barebones hotswap. While I like the look of the NK65 a bit more when viewed from directly above (those minimal indicators off to the side! mmm), I pretty much can’t stand the “fat wedge” look, especially with the sharp corners. Aesthetically, I prefer almost everything else about the Durgod - though there’s no brass weight, which does look pretty glorious on the NK.

Still - if I’m in the position of making compromises for a lower price, I think the Hades is more attractive and hits closer to my personal value sweet spot: I’m ending up with a final product I like more and on which I’ve spent a lot less money - if a lot more time. The end result is definitely good enough to tide me over until I can responsibly purchase some real functioning art like a Canoe or Heavy-6.

… well that was a lot more verbose than I first indented. That’s what happens when I take the attention-salts on my days off…

Today i learned (again) that i can’t count…
i was in the process making my freshly aquired Leopold FC660M
hotswapable and found out after 3/4 soldered holdtight sockets that i only ordered 100 of this little fuckers. so now till my digikey order arrives, i have a partly hotswapable board xD i also have to say i lubed and replaced the springs in the mx clears it came with and the result is really awesome.

We all suffer from an issue with numbers… Don’t worry…

Learned the past 2 days how to flash customized QMK firmware. First that the “GH60 Satan” board I got is actually a YD60MQ, contrary to the item description / what the invoice says. Second that if you pick the right board, it’s actually relatively easy…

Oh and that 60% is pretty hard to get used to for me as a heavy user of the nav / arrow keys, since I combine those with Ctrl / Shift, too. Adding a layer key to the equation really messes up my brain/hands, especially since I’m occupied with actual programming already and have to fight the muscle memory and the switch from ISO-DE to ANSI.

I know the feeling with QMK, with the rest i solved/compromised it like this. 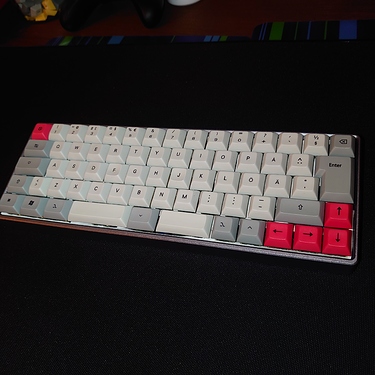 The plural of forum is fora.

Today I learned that USPS can’t understand that E and Apt E are the same thing in an address second line field. So, my Novekleys order was put into a status of “Your item was forwarded to a different address at 10:39 am on July 28, 2020 in HILLSBORO, OR. This was because of forwarding instructions or because the address or ZIP Code on the label was incorrect.” This should be fun to track down.

And for some switches coming from ILUMKB, USPS says they are coming today, to me, in Oregon. But the last tracking update was from today at 10:49am that shows they just left Queens, NY. Hmmm…