What do we know about the Gazzew Boba U4 switches?

Thanks @HungerMechanic for the detailed writeup.

I did get mine with 68g springs last week and my first impression is pretty good,
i’m impressed after disliking the normal skies that bad last year…

I did put under in the spacebar of my T60 built with gateron silent inks and it’s nice.

I was long looking for a silent tactile for using under the spacebar, ever since
liking the sound of my bke redux dones in my novatouch.

Will report back after i did lube them up and put in a hotswap board.

Yeah thanks for the spring testing, I’m going to grab some 55g or maybe 50g springs. I bought 62g Bobas and they’re much heavier feeling than any other 62g switch I’ve tried, the tactile leafs on these are hardcore.
I’m impressed with these though, they’re very snappy, and unlubed they feel about as scratchy as fully lubed Silent Skies. Also I was expecting these to feel like Holy Pandas, but these feel like heavier, more tactile and much improved Matias Quiet Clicks to me. Or MX Clears, except the bump takes up the entire stroke.
I ended up putting a very thin coat of 3204 on everything (including the legs, these can handle it) and really like the effect. It nearly gets rid of the leaf noise and scratch so you pretty much just hear the switches bottoming out.

And since I’ve been going crazy buying tactile switches, this is how these feel vs the other top tactiles for me: 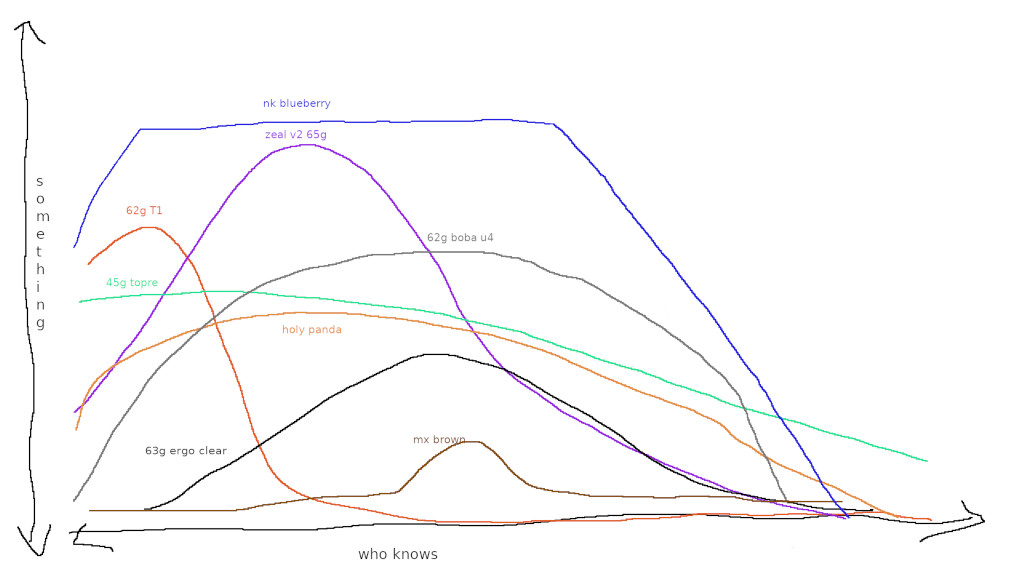 Over 9000 hours in ms paint so there’s no way any of this is wrong.

I agree, The 62gr feel very snappy for what they are.

Actually, I think your MS Paint graph is fairly representative of the tactility of those switches.

This graph is awesome and hypes me about the U4’s as I have Aqua Zilents (v2 zilents) and the tactility is a bit too much.

this is a great diagram. I’ve only personally experienced the topre, blueberries, HPs, boba u4’s, and browns, and I agree. would be curious if you have also experienced moyu blacks / everglide dark jades in comparison to these

V2 zealios and zilents certainly have a stiff top, don’t they? I find myself not liking them for a few days, but if you stay with them a while it becomes easier. I think what I don’t like is that, for me, strong tactility at the top requires me to change my typing style. I tend to keep my fingers close to, if not resting on, the home keys as I type. These higher tactile switches require me to hover up higher so that I can strike the keys, instead of just pressing them. It’s an overall bouncier typing style.

Some days I can do it, and some days I can’t. Good to have options to swap to, I suppose. I have my Bobas showing up soon.

That’s awesome - and makes me excited for my Bobas coming in the mail.

Another switch I’ve tried has a bump that I’d represent in a similar way, if with a shorter travel. Halo stem in a Blue Ink housing - the whole travel is one big, smooth bump - harsh bottom-out, though. I call them Heisenbergs.

I have a board with Aqua Zilents, and I understand what you are saying.

The U4 are not quite as intense as the Aqua Zilents. I think the real advantage of the U4, though, is the ability to order them in pieces. This will facilitate the creation of custom switches.

I think it might be easier to quiet the spring in the Boba housings.

Also, the Aqua Zilents, at least the early ones, did not always take too kindly to disassembly.

For anyone going forward testing Silent Sky Stems in the Boba housings, I’d be interested to know your preferred lubing method.

Yes exactly ! The tactility is nice and some days you wanna feel it and have fun,but most days you I just wanna be productive, don’t think about the board and burst text on it. The same thing happened to me with BKE Light domes.

The last one somehow get’s the fastest WPM from me. Got biip 2048 in the mail 2 days ago and can’t wait to put them on it.

I tried the Boba U4s in 68g and 62g. I pretty much completely agree with @HungerMechanic review.

Now that I have felt it I totally get the tactile event is more “D” then “P” comment and it is very accurate.

Comparing these to Zilent 67g that I was using before. They are quieter. The stem wobble in general is impressive. I don’t that much experience with switches but I noticed it which is saying a lot.

Both the stock 62g & 68g springs felt very heavy. My hands didn’t like the 68g stock spring. Swapped with some TX 60g and now really like the feeling of them.

As far as FrankenSwitching I swapped a Zilent stem and top into the Boba bottom which required snipping a few parts of the Zilent top. It worked but honestly it sounded exactly like the Zilent and didn’t see any benefits to keeping it.

One other note. This is my first experience with Outemu switches they have very thin pins that bend easily. A few of the pins curled up when setting the switches in my hotswap board. If I were to guess this is likely the Outemu spec in general to fit their specific hot swaps.

For lubing I went with 3204 they sound and feel slightly better then unlubbed but don’t expect them to be dramatically better with lube then some other switches. I could see how some people could go for using them unlubbed.

At the end of the day I like them, and will swap out the Zilents for my work board.

All the nice comments about Gazzew Boba U4 makes me feel like receiving notifications that a top-of-the-line custom keyboard I ordered two years ago finally got delivered, to my old address after I moved to another continent.

Got mine in the mail today and mounted them earlier this evening. 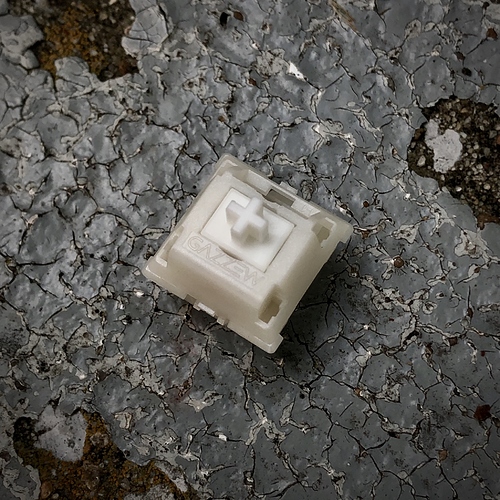 These feel a little bit like Silent Box Browns with a rounder bump in that they manage to be impressively snappy even with very modest to light spring weighting.

If I can successfully mitigate the dry-feeling creaky / crunchy leaves in a few of these, I think the Boba U4 will end up one of my very favorite switches. Either way, I’m already very impressed, and excited to start tuning and kit-bashing them.

Edit: some potato photos comparing the previous U4’s I had with the ones pre-installed in my Bobas; 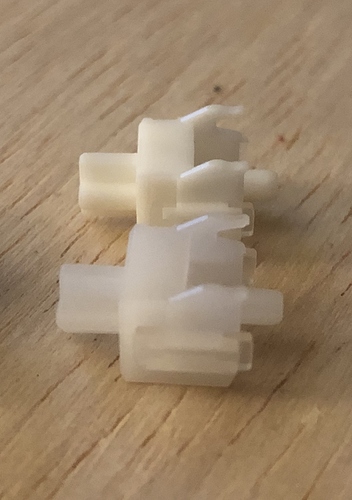 Color. The one farthest from the camera is from a Boba U4, the other I got separately. 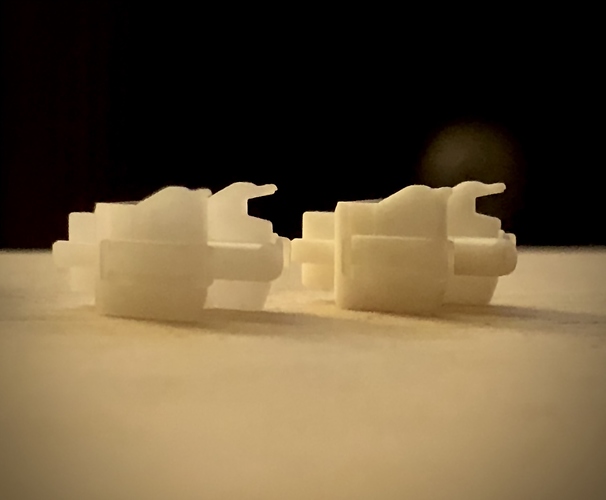 Stem legs. Not a straight-on photo so not the best comparison, but it gives you an idea of the shape.

Update: The new stems are definitely not identical to the prototypes, similar as they may appear.

The new stems produce a stronger bump and have less wobble than the prototypes; both in the Boba housings and in others - specifically Halo housings, as-tested. While the prototypes feel a little muddy in Halos, the new ones feel discretely “cushioned” prior to actually bottoming-out on the silicone pads.

While the new stems appear especially dialed for maximum tactility and minimum wobble with Boba housings, I might prefer the comparatively mild experience of putting them in Halo housings.

Wow, so much great info ! Thanks !

I think we have very extensive knowledge on this thread.

I was about to post on these but I think you have it covered and then some. I lubed with 204g0 and it’s noticeably more smooth - I lubed the contact leaf and not the legs and while it does reduce the tactility its only by a minute amount and the tactility is still really strong.

Testing frankenswitch potential on the housings for these this morning, and I’d say my findings roughly align with Dave’s: these tops are really tight, to the point it seems like some stems might need modification to work.

I had blueberry, zealio, phoenix, and moyu stems out already (for other testing), and literally none of them but the Phoenix return due to the tightness of the stem cutout on these. I can dig up some of my halo stems to give those a try, but I’ve seen folks say those work (possibly also with modification?). My initial thoughts are that the tops of these may have limited frankenswitch potential beyond Gazzew’s own (excellent and increasing) stem offerings, but the bottoms (with their good material, tolerances, and leaves) seem like they have high potential for more-complex frankenswitching (a la Zykos), which I may explore down the road.

Oh, and as a note: this housing probably brings the Phoenix stem’s click down about as low and round as a clickjacket can get without modification. Kinda digging the combo.

I had the same findings with the boba housings I bought. The tops are extremely tight & not compatible with many other non Outemu bottoms without modification. The bottoms I do agree could still have potential for modding. What tops do you got BTW? Since I ordered just the housings from hbheroinbob himself I got the no slot tops. Not sure if these are the same as the Sky housings, but if they are the slotted tops should be decently looser & much better for modding. I still have a bag of the OG clear no slot tops I have yet to find a good use for since those are so tight. While the regular Sky tops showed no issues with other stems, although if I’m remembering correctly they didn’t play too well with non Outuemu bottoms.

I ordered from 1up, so I was testing with the slotted tops.

Damn, they are really dialling the tolerances in tight now then! I was hoping the slotted tops might be a bit looser, but it sounds like slotted & no slot boba tps have the same specs.

Yeah, considering getting some of the no-slot tops (and some calipers, finally) to see how far things have come.