What Keyboard was your "gateway drug"?

Coolermaster Quickfire Rapid with MX Blues was it for me.

Back when all we had was a few cherry switches, mx clears had to be purchased via GBs or harvesting Poker 2s. Before Artisans were thing and novelty keys were the path to bling.

After that my adventure stuck with MX blues, but in a very interesting direction, a Ducky mini. going from TKL to 60% was eye opening and definitely the true start of me wanting to go deeper and know more about this crazy little hobby called keyboards.

This guy was my first. WASD code with MX Blues. I loved this thing before I learned to hate blues. 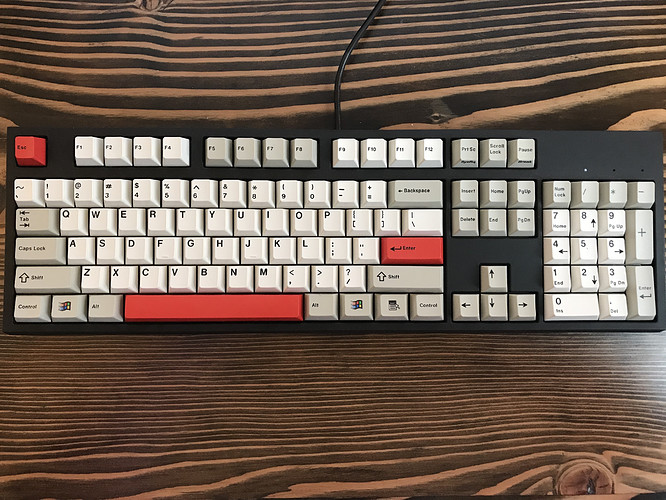 I posted about it here: Do you have a build that is flawed but lovable?

Vortex Pok3r with Cherry browns for me. I still have it; however, I changed out the browns with Gateron greens a few years ago and added green LEDs. Weird choices we make sometimes, eh?

I still love the feel and sound of blues in the right case. I take my son to Sport Clips to get his hair cut. They have an old/cheap Rosewill board with MX blues that you use to enter your info to check in. Something about that board and the way they have it mounted to a shelf… I love it. You don’t really have to use it (you can use the touch screen on the iPad instead) but I always make sure I type on it when we go. Ka-chink, Ka-chink, Ka-chink.

I had several attempts at using mechanical keyboards over the years, I have even built them for other people, but they never quite… clicked for me. They were too high and had too much of key travel. Until I got a relatively cheap HV-KB390L with choc switches. It was off-the shelf, not custom, but it convinced me that not all mechanical keyboards are horrible, and encouraged me to build my own keyboards using those switches.

Hard to believe it was only september of 2019 when I got into this hobby, but as a broke college student I followed the Chyrosran22 path and picked up a relatively old alps board from my local computer recyler. 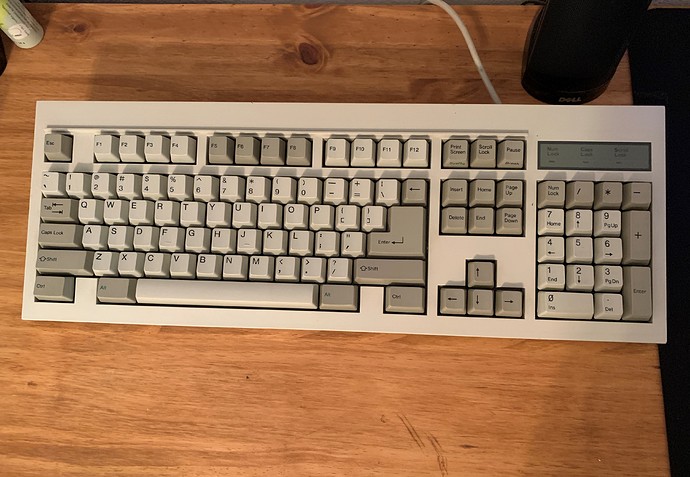 Started with a Coolermaster board too. The CM Quickfire TK with MX Browns.

Even back then I disliked the lack of tactility. It bothered me so much that I bought 3 other keyboards with the same switch because I thought I had a defective board. Turns out MX Browns just weren’t the hype I was expecting…thanks Linus ¯_(ツ)_/¯

The first mechanical keyboard I owned was a Steelseries 7G with MX blacks. I sold that after a while and bought a WASD board with MX blues. I used that WASD board for years and it’s definitely what led me deeper into the hobby.

I got started in spring 2020. Unemployed. So I finally had some time to explore the hobby like I had wanted to for some time. The more I read the deeper the rabbit hole got. Demand for boards was high. I ended up on KBDFans with no clue if it was legit or if I would like it. I ordered a built KBD75v2 alum case with cherry red switches. Then I found SA Laser set on r/mm and it was the best first board I could’ve imagined.

I immediately fell in love and never looked back.

Later I found keebtalk, and now I’m happy in my hobby.

I had a Leopold with browns, a Pok3r with browns, and at Realforce 87u. All really interesting boards, but I wouldn’t say I really dove into the deep end until I got a aluminum Tada68 with Zeal V2s. Having QMK solved my issues with the previous boards, and the Zeal switches solved my problem with browns.

Topre modding had not really popped off when I had the Realforce. If I could have programmed it, I would likely still have it around.

CM Quickfire TKL was my first, cherry reds because “they’re the best for gaming” hehe. (Edit: somewhere around 2010-2012).

I sanded the case down to just black, really loved the thing. Then I spilled grape juice all over it, and bought a 1995 model m. The rest is history.

A Ducky one full size w/ cherry browns, I bought back in 2017 after getting a desktop for the first time since high school.
My friend suggested I get a mechanical keyboard from Ducky. Once I looked into it, I saw the wide variety of mechanical keyboards to be had. 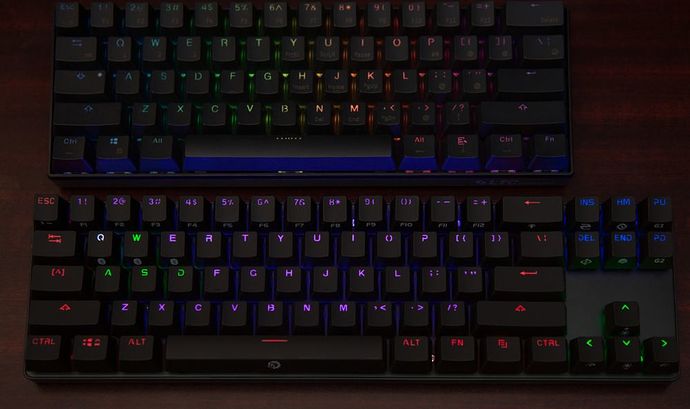 The Drevo Calibur made me want a “good” keyboard, but… 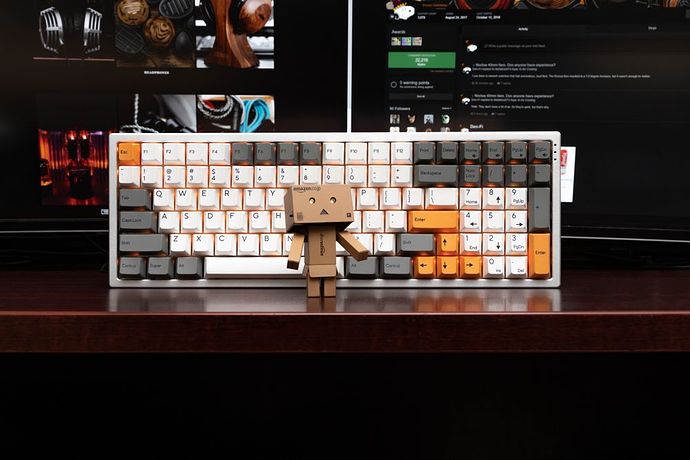 The Input Club Kira want me want ALL of the keyboards.

I got started in the latter half of 2017 with this guy: 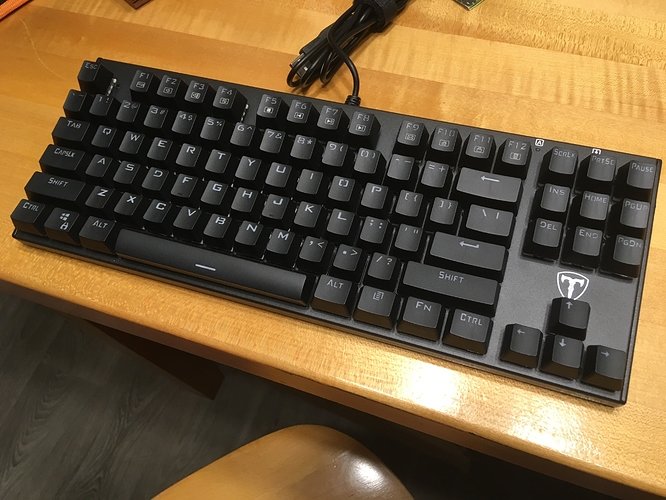 “TOMOKO Water Resistant Mechanical Keyboard” - also known as the EasternTimes Tech I-500, according to the label on it. I think the logo on the top is associated with VictSing.

I got this on Amazon for ~$35 IIRC - since then I’ve seen them as low as $26, though lately I haven’t seen the model for sale at all - not that there’s any shortage of similar ones. Anyway - I first decided to get a mechanical keyboard and see what the fuss was all about after purchasing a dome keyboard so bad I couldn’t tolerate it for daily use. Mind you I’d pretty much always been using dome boards - this was was especially bad.

Anyway. Some youtuber led me to this board, touting it as one of the cheapest on the market at the time while still being decent. Five seconds with the thing and I knew it was leagues better than any keyboard I’d ever owned, and I immediately appreciated that floppy hot garbage mucous-membrane for setting me down this path.

As for the actual board, it’s a pretty thick sheet of aluminum with two short bends making the front and back of the case. The sides and underside are plastic. Thanks to the thickness and bends that run the length, the top-shell / plate is super-duper rigid, meaning the keyboard has near zero flex. It’s got flip-out feet and stays planted on the desk with a decent weight.

My original example shipped with SwitchMaster blues - that particular keyboard has gone on to inspire at least two other subsequent owners to get on the mechanical keeb train, and has gone from one coast to the other in the process.

I got a second one that came with Outemu blues, which I customized with blue and yellow TaiHao caps and donated to the Best Buy where I was working at the time. I later decided I wanted one in my collection for nostalgia, and so that’s what you see in the photo. That one shipped with Jixian blues and much, much better keycaps than the first one, which were extra bad.

One last thing I’ll say about this great value little TKL - it’s crazy loud even among clicky keebs. The extra-rigid outboard style plate makes this board a veritable cacophony all but guaranteed to destroy work and personal relationships alike… but boy is it satisfying to clack away on.

Leopold FC750R (gray and blue) with Cherry MX Blues. I live in Nashville, so it was a short trip to Fairview to visit MechanicalKeyboards store to try out different switches. I eventually settled on the Blues, because I thought I liked the clickiness. I think a part of me still does.

Filco Majestouch TKL with MX Blues, those keycaps were disgusting once I was done with MMOs, like half melted. At least it’s enjoying a nice retirement in a TEX case, zeal v2’s and actual caps now. I really hate costar stabs and fiddling with tape.

A Ducky One TKL with MX blues I found in a pile of returned merchandise at microcenter. The nearest employee saw me dig it out and exclaimed “wow we sell those?!?!”.

I feel like I had started in a weird spot, doing a bunch of research on what I had wanted from a keyboard.

I had ended up looking around Originative CO. in 2017 and found the Saber68 and settled on MOD-Ms, and let me tell you that I absolutely loved that board and it worked great for me. To this day I still love 65% and I miss selling it so much. Though I know that the guy that I had sold it to is using it great for his kids to get better with and that makes me more than happy.

Well I started off with a Razor Blackwidow around 2014 and I hated everything about it. MX Blues sounded terrible and it really turned me off to mechanical keyboards.

Fast forward several years and I was looking for a compact keyboard for my desktop and I ordered a decent one by accident - a MagicForce68 with Brown clones. It was loud, but not obnoxious like the Blues and I instantly loved it.

My wallet has never recovered (actually this hobby just replaced another expensive hobby I was previously involved in, so it isn’t too bad).

The Drop Alt with HPs and MT3.

I know there’s little love for Drop among some on Keebtalk, so I’ll say the following at the risk of earning some ire: Since my introduction to mechanical keyboards was a concomitant of buying audio gear on Drop, I’m glad Drop exists; otherwise, I likely wouldn’t have tried a mechanical keyboard as soon as I did.

Even though I have other keyboards now, I still do like my Alt. It’s a fun, easy keyboard for what it is, and I do intermittently like typing on an integrated plate.