Which set of caps are you cancelling first?

First set I got was the OG GMK Triumph Adler set from 2015, and (partially because of the coverage) I’ve never even mounted mine. I don’t get what you mean. You mean to like, make the set disappear from existence?

Either way, this abomination: This set should disappear from the face of the planet and all evidence of its existence should be erased and dumped in a black hole.

I miss the days when the only keycaps were uhm…decent keycap designs and not memes.

Ahoy and welcome to the forum!

The first set of caps I could say I “cancelled” (in this case decided I didn’t like and sold) was Signature Plastics’ DSA Dolch. IIRC that was my first expensive keyset and the first one I lusted after looking at pictures online: 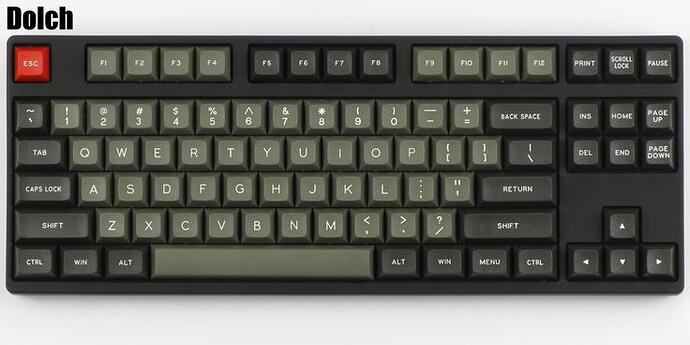 I tried to get my hands on it a few times, always missing the sale until one day I reached out to SP directly and asked if there was some way I could reserve a spot in line. A very nice lady working there poked around the warehouse and found a complete set I could purchase. I sometimes rag on SP’s curiously underwhelming packaging (sandwich bags) and stuff like that, but they have unusually good customer service and that’s awesome.

I’m not at home to dig out any of my own photos, but I found the color to be very underwhelming in person. It’s not the slate grey that real / reproduction Dolch sets are, and it’s also not the fairly rich OD-green shown in the product photo, but a relatively light and weak version of it: 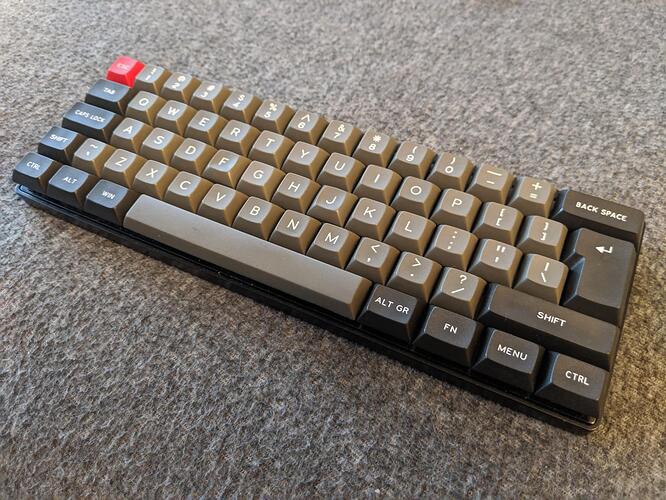 I could get past the color, but quickly found DSA just wasn’t my thing. I sold the set to a fellow in the UK after a week or so.

I had a similar experience with two other SP sets, SA 1965 and SA Chocolatier - mostly just that I don’t type all that well with SA profile but I also wasn’t as crazy about Chocolatier’s brown in person as I thought I’d be. I did keep those, though - I have a feeling they’ll find the right keeb as a home in my collection eventually.

There are also a few sets I literally “cancelled” as in cancelled the pre-order for or simply returned for QC reasons;

I have one more set that’s hideous, but it’s got this pug-like so-ugly-it’s-charming thing going on so I kept it; 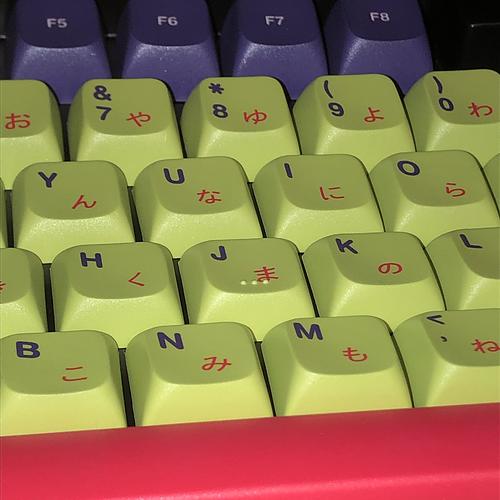 The profile and funky colors remind me of something that would be found in a keyboard made for 5 year olds. It’s disgustingly nice

Hmmm. SA Chronicler aka the SA version of SoWare is pretty bad imo I want to show this to my old color theory teacher - I think it would give her nightmares. I wonder if a color-blind person would even be able to tell the set has alpha legends.

The colors of the alphas and mods aren’t very close to the renders and I’m not sure why I haven’t heard more about it.

There were supposed to be dark gray/near black mods with middle gray alphas but they shipped with middle gray mods and light gray alphas. The contrast of the set is completely off and just looks washed out. A lot of people’s pictures online seem to be edited so that the caps appear darker like the original renders.

Ain’t the modo Mods to be like the dolch Alphas?

Sets that I have: MT3 Suswatari. I like the feel can’t handle the sound.

Sets I haven’t received: KAM L’il Dragon. This group buy is such a disaster (not the fault of the designer) that who knows when it will ever arrive, so now I am just grumpy with it.

oh what happened with th gb?

I own DSS and DSA dolch and they’re rarely on keyboards. I don’t think I mind the colors and I like the profiles but they just look cheap bc there are so many clone dolch sets out there. Maybe wait a few years and it will come back in fashion.

This is my vote too

If it’s all the keys, maybe give them a try on some dampened switches like TTC Silent Bluish Whites - if it’s just the thunk-y space bar, some vendors like KBDfans sell foam inserts for SA spacebars that should fit in MT3 as well.

Add one more to the DSA Dolch cancel tally. Ordered that set early on in my keyboard journey and cancelled before they shipped in favor of NP PBT Crayon. I don’t think it’s necessarily a bad set, but when I saw actual photos compared to the website shots, I realized it wasn’t for me.

Was supposed to be delivered start of 2022. Now it is 7th,I think, in line on the production line and behind a bunch of KAT sets that still haven’t delivered.

So no real drama just a looooong wait with no end in sight.

MT3 sounds “wet” to me. I can’t explain it any better than that.

I might give them a try on my Hidari because I am in love with how that board sounds. I do have some silent alpacas I could try.

Man, 1965 was such a disappointment for me. I wanted the keyset in these renders and while the colors are true to their renders, they just don’t have the same feel in person that they did in the render.

As far as sets I’d cancel that I own, probably mt3 Susu or these kbd topre caps. Honestly I’ve been super conservative on buying them and have more regretted missed caps than regretting owning them.

I think I know what you mean - at every least I’ve used that word trying to describe plastic sounds before. All my MT3 sets are ABS like Susu - I wonder if the PBT ones have a more dry sound.

while the colors are true to their renders, they just don’t have the same feel in person that they did in the render

You mean you don’t live in a smokey room with sunbeams dramatically illuminating particular cool things in your room?

But in all seriousness, I understand this sentiment. It’s how I felt about GMK DMG for some reason. Not a horrible set, but it just didn’t give me the feels where I wanted it to.