I’m on a mission.

My brother in law is an audio engineer here in Nashville. He works with artists such as Big and Rich, Mumford and Sons and many others. So I’m going to build him a custom mech to replace his ‘ultra quiet’ apple keyboard (

He uses Pro tools and I found these Pro tools Keycaps over at WASD that I am going to use.

I’m going to try to match the aesthetic of the Apple keyboard as much as possible, particularly the Pro Tools keyboard’s that are out there:

But of course it’ll be a kick ass mech.

WASD has these great aftermarket full sized cases, so I’ll grab me one of those: 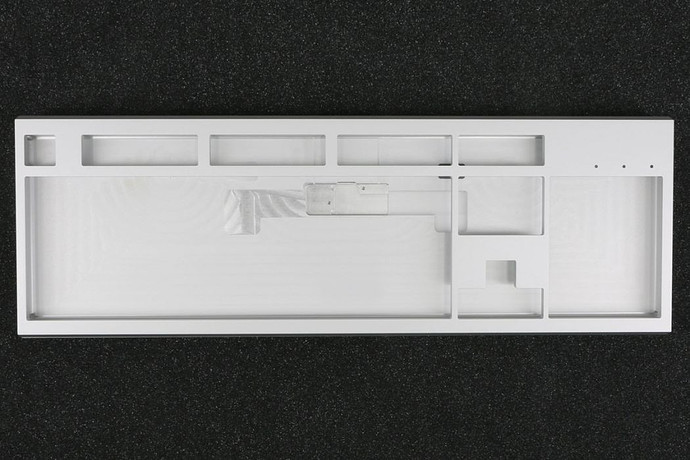 Now for the fun part.
How do I make this veritable resonance chamber as silent as possible for his studio?

First step will be to find the quietest switches of course. I’ve tried silent switches before, I don’t love them. They’re mostly like regular switches but with a worse typing feel

Plus, they’re not all that quiet, at least, not recording studio quiet.

I came across this excellent sound comparison and I was blown away by these Outemu silent switches. 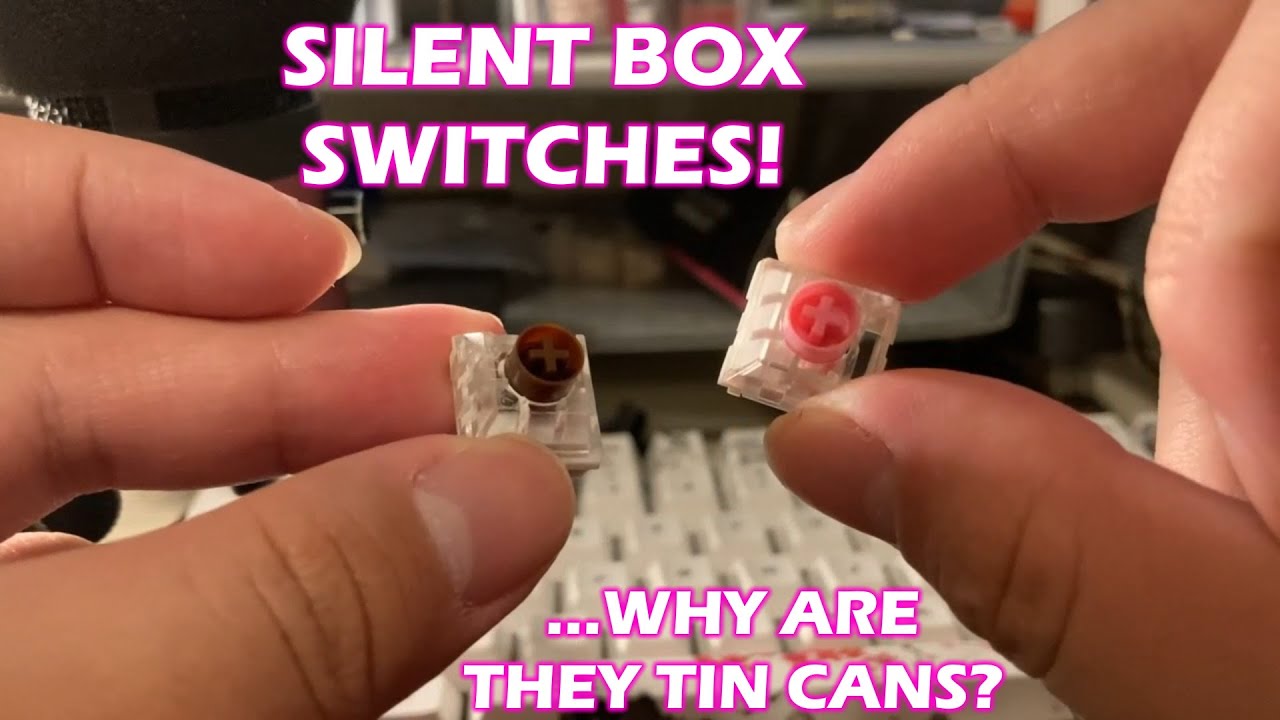 Apparently they are the same as Outemu Silent Forest switches so I picked some of those up. I guess they are somehow related to Bobas? Again, I haven’t really hopped on the Boba train yet so maybe someone can shed some light on all that.

Anyway, when they arrived, I was even more blown away. These things are so quiet you could hear a snail clear its throat in the garden.

Obviously I lubed and filmed them.

I already posted on the keyboard chores thread about my process and testing to get these frankly average ABS caps quieter but it bears repeating here.

I got a square punch and a hole punch to cut out pieces of felt from this adhesive roll. 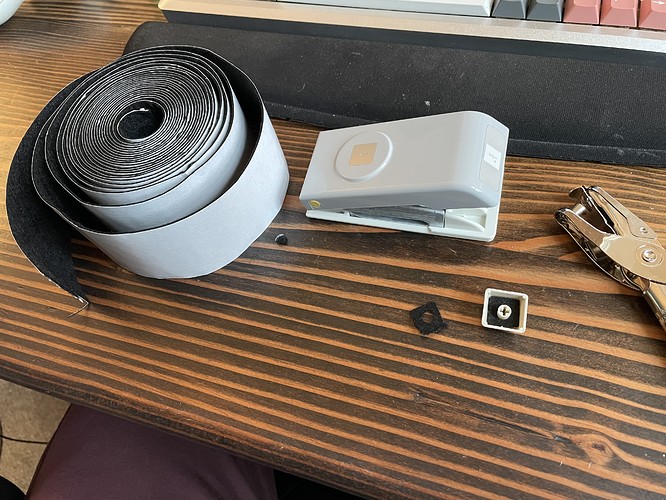 Using these old WASD keycaps, I compared the stock cap with the felt insert as well as putting some hot glue inside the keycap before adding the felt. 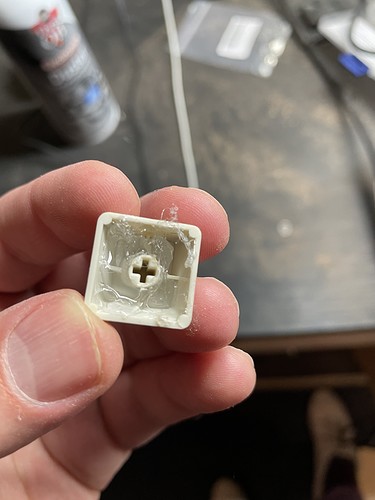 The hot glue is pretty messy and difficult to control but if I end up going this route I’m sure I will improve my technique with practice. 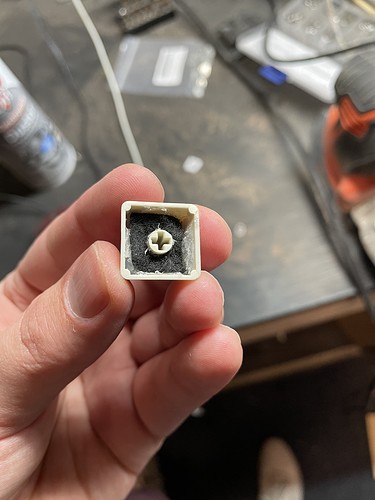 It doesn’t look so bad after adding the felt.

Here’s the sound comparison. These are zilents - not the silent forests This is just to compare the caps. 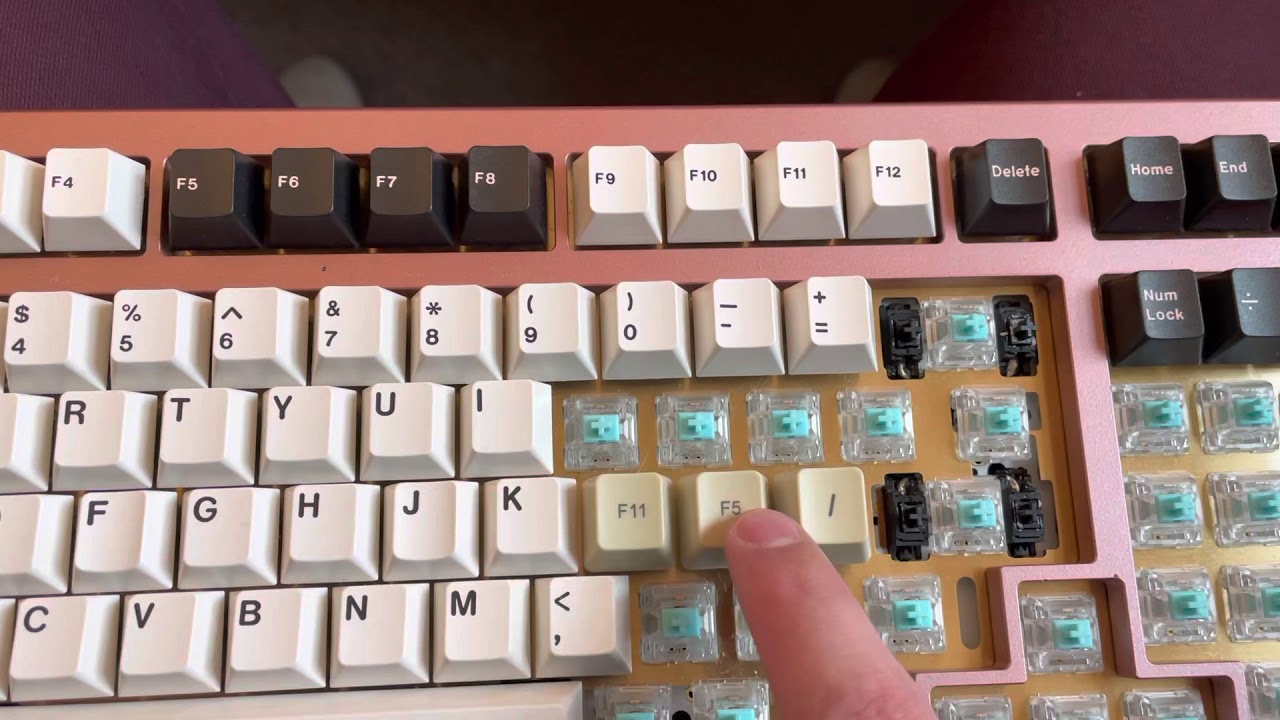 It certainly gives in a deeper sound. As far as making it quieter, it’s difficult to tell the difference. However, I think it is slightly quieter and when you’re working in a sound studio every decibel counts.

As far as key feel, I expected it to add another layer of mushiness, like adding an O-ring. It doesn’t. Luckily, the felt is thin enough that it doesn’t even make contact with the switch housing.

After posting that bit in Chores, @patcoll suggested I use sticky tack. That’s a way better idea. So I’ll give that a go.

Next bit - Foam and shit.

After cleansing this $75 donor board of its unrighteousness… 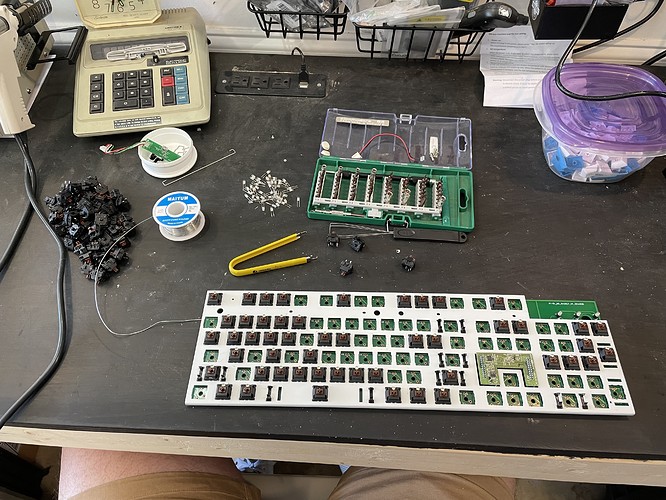 I installed the switches and got to work adding strips of adhesive neoprene foam under the plate. 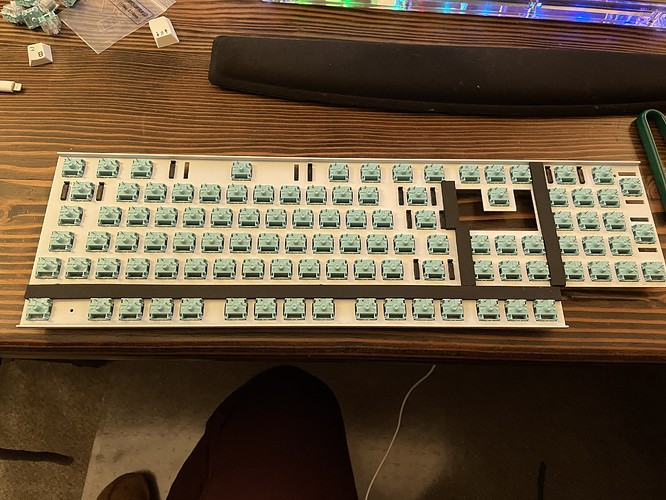 Note on the switches - Delightfully, but not overbearingly tactile, not mushy at all. 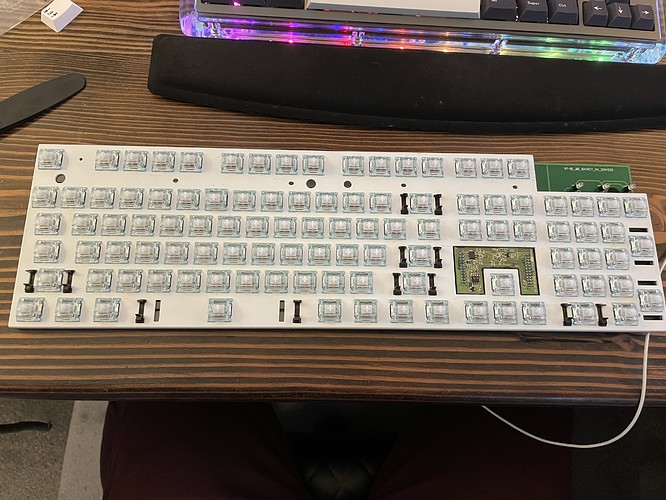 All done with that.

Next, I added a layer of these thin adhesive felt sheets for additional sound dampening. 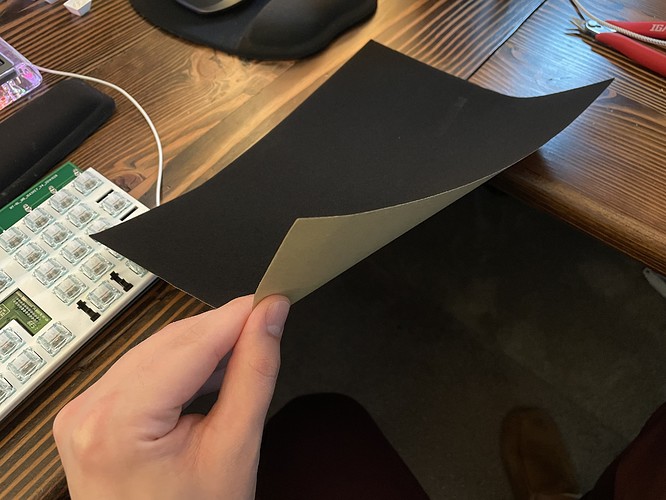 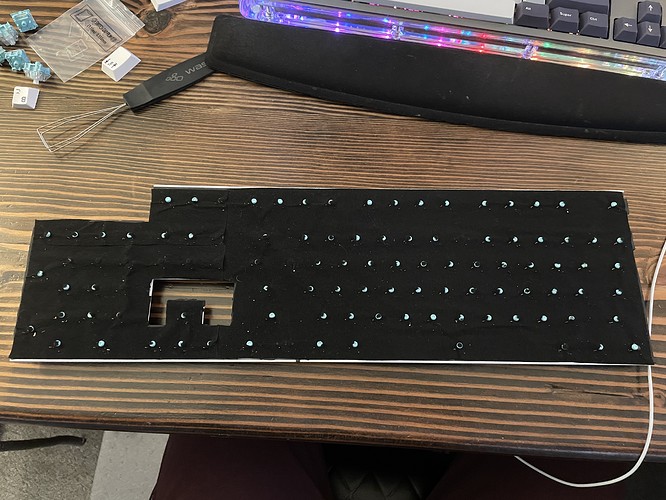 Please let me know if you have other little tips and tricks although this thing is already so quiet I think we’re at the point of deminishing returns.

Next steps are foam under the PCB, silance all those caps, and an adhesive matfor the keybaord to sit on ala the HHKB Silencing mat - http://www.smartimports.net/hhkb-hg-embossed-vibration-absorption-mat/

So this is awesome, and I greatly appreciate you documenting this. I’m actually wanting to do the same thing for a very good friend of mine who is something of an excel guru. I imagine I’ll be following your lead on this, and implementing these methods into the full-size build for my buddy.

No love for qmx clips?

So on that note, I’ve got another project in the works for my father in law who is also an Excel guru. I too spend a lot of time on Excel, so I’m working on this ideal layout for him. Will go on the Macro-1 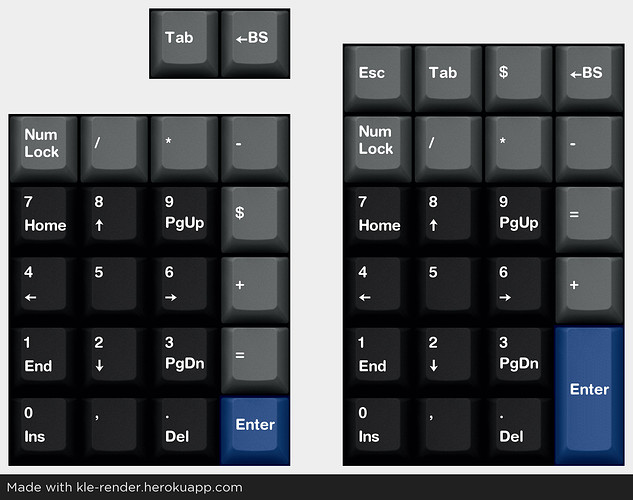 The second layout is for the Ducky pocket.

What I dislike the most about silent switches is the shortened key travel so I experimented with placing a very small bit of Sorbothane (~0.5mm in diameter) into the stem hole of Cherry black housing. The result was pretty good:

I can use this. Only issue is consistency which means a lot of trial and error.

This is awesome! I have a friend that would love the keys you’re working on.

I can’t think of any MX-compatible switches more quiet than Outemus - I think you made the right call there.

Bobas are a series of soft-plastic housings that ship with one of three stems; a long-pole tactile, a silent tactile, and a silent linear. The linears are crazy quiet. The complete Boba switches most have heard of at this point are U4’s - the silent tactiles, and U4T’s, the long pole non-silent version of the same stem.

The U4 silent is basically a big-round-bump version of the more crisp “Silent Forest” (or “Silent Sky” or just “silent tactile” depending on who you’re buying from).

If one wanted to theoretically maximize MX-compatible silence, I’m imagining the silent linear Outemu stems in the PBT Moyu housings - at that point I think the sound of fingertips hitting the keys will start to compete with the switches in terms of volume.

you could hear a snail clear its throat in the garden.

And cool project. I love it. I appreciate you focusing on the end goal for someone else despite your own personal preferences. That’s the real deal.

This is, essentially, how TTC Bluish-Whites are silenced! It’s a neat method imo 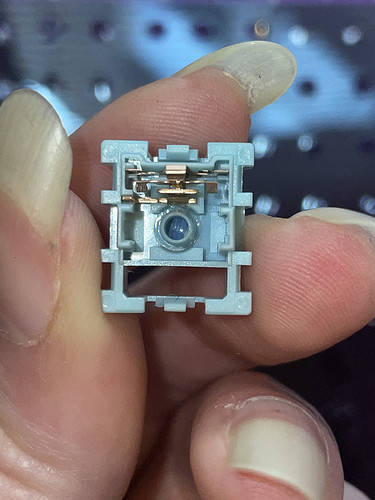 My own personal preferences: 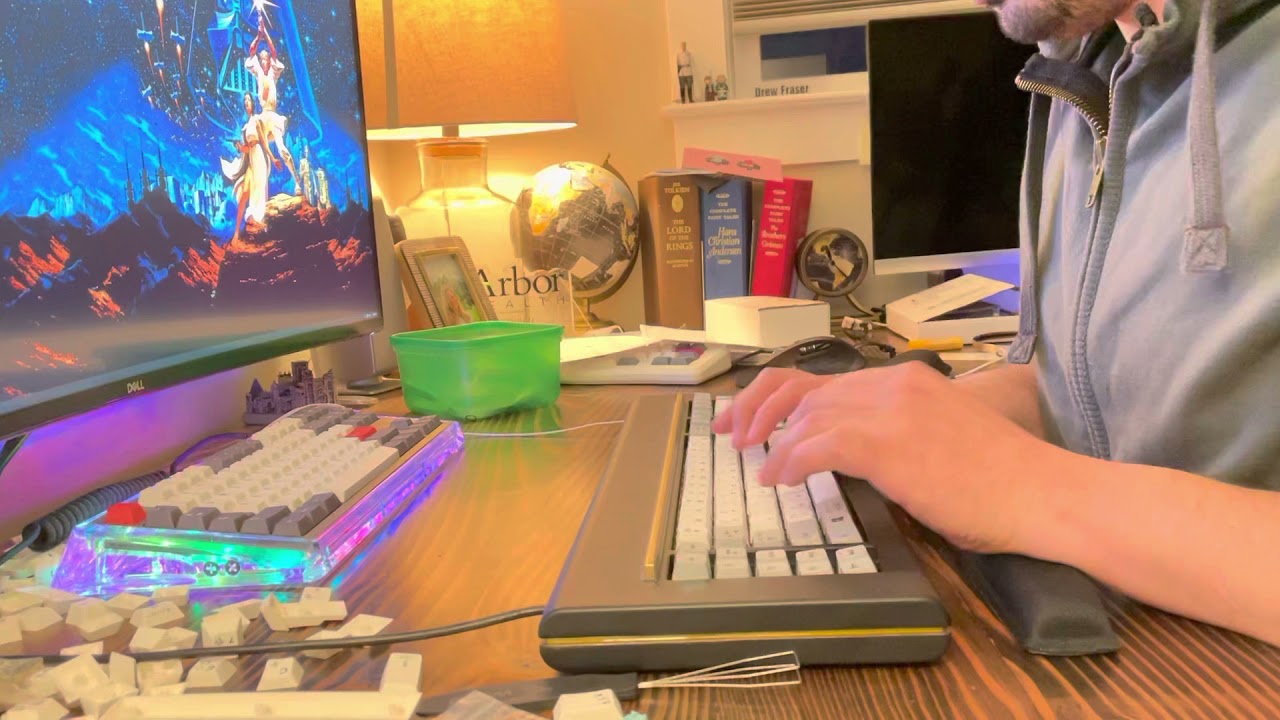 This is, essentially, how TTC Bluish-Whites are silenced! It’s a neat method imo

Nice. How is the key travel? I just measured my Sorbothane-silenced switch and, as you can see from the photo, key travel didn’t change. Amount of extra force need to squish the ball is very little yet the ball effectively nerfed the clack. 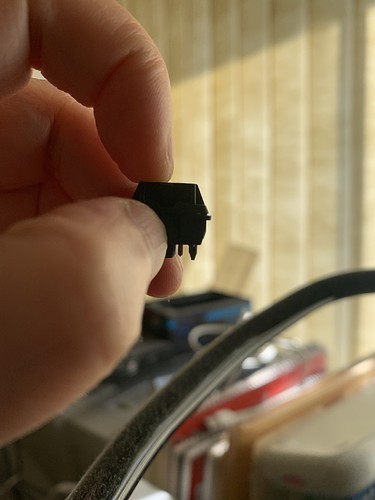 I promise I’m not being a troll: Clipping your nails and not bottoming out go a long way towards silence too. For the latter, heavy springs probably would help with making the board quieter, and since this is likely less of a typist keyboard, heavy-spring-fatigue may be de minimis factor.

The three keys to silence:

I promise I’m not being a troll: Clipping your nails and not bottoming out go a long way towards silence too.

Yeah, absolutely! Fortunately I both quite like having long nails and have no desire to make my boards particularly silent

I’ll make sure to pass that along

Haha, exactly. I just threw that out there since we’re on the path to the “world’s quietest”

@ddrfraser1 Well, to the extent they resist bottoming out and diminish the force/speed with which the stem hits the housing when that threshold is passed. I’ve never done an A/B test, so this one isn’t keyboard science. Just a casual observation from when I switch from light to heavy boards.

Haha, exactly. I just threw that out there since we’re on the path to the “world’s quietest”

Can confirm. Sometimes I forget about it - and then my keeb reminds me.

For me at least, the short Halo True springs are great for not bottoming out. I use them in linears - I don’t know if they’re intended as progressive springs, but they start out lighter than Clears and quickly get heavier.

What is wrong with people? 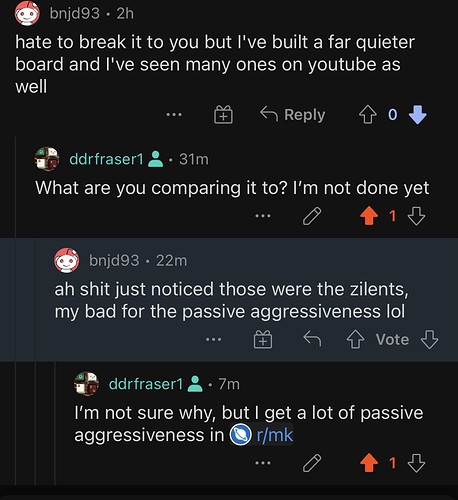 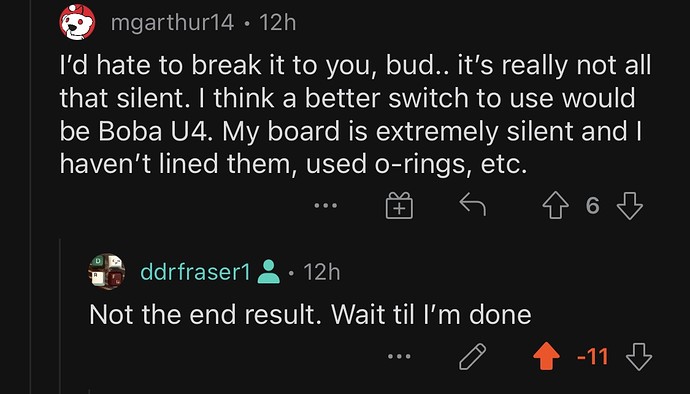 Why do I even bother with r/mk?