I thought it would be useful to have a sort of catch-all thread for 3D printing as it relates to keyboards. I searched but didn’t see anything that seemed close to a general-purpose thread. So I hope people will feel free to post anything related to 3D printing and keyboards here.

I posted about printing my first keyboard case a while back, but I finally decided to try my hand at designing one in Fusion 360.

P11402361248×592 671 KB
I didn’t originally design this with SA Laser in mind, but then I saw that I had some hot pink filament and decided to see what it would look like. It would be nice if it was an exact match for the pink accents, but still I think it looks pretty decent, and it functions as a case, which was the important thing. 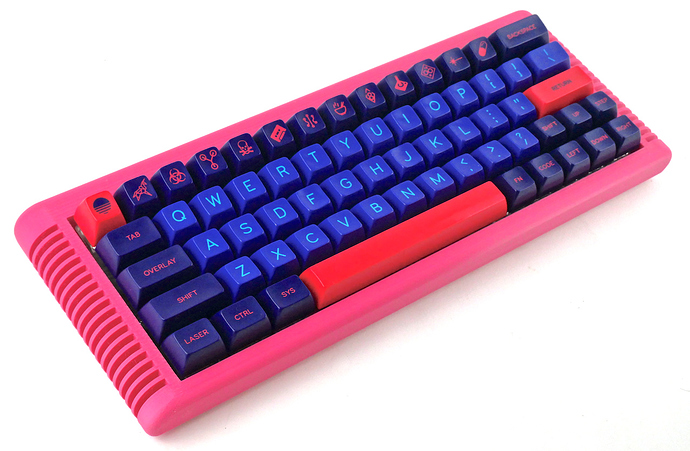 I bought some brass knurled nuts that I could heat up with my soldering iron to melt them into the case, allowing me to use screws to attach the PCB to the case. But I had trouble figuring out where to place standoffs in the 3D model so I ended up not doing that. 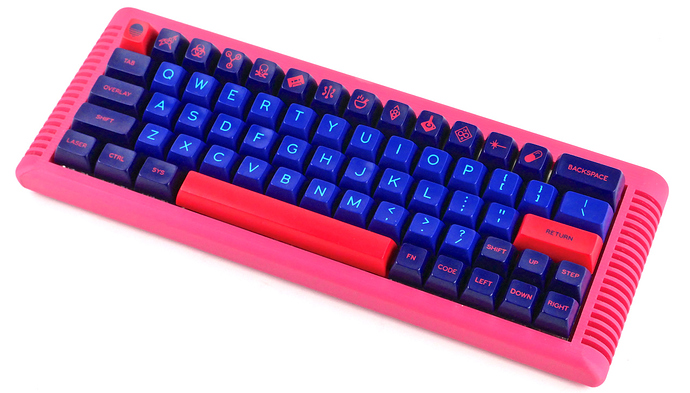 This was printed in 3D Solutech PLA on a Creality CR-10S4 printer, which is big enough to do it all in one piece. Due to the curves, I needed to print it at .1mm layer height, which meant it took more than 30 hours to finish. But it didn’t really require any kind of post-processing.

[EDIT: I decided to get rid of the pink space bar and take a photo in different lighting.] 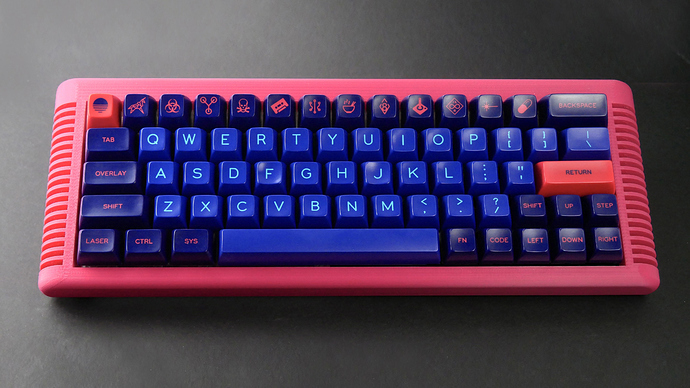 Dang dude, that looks awesome. The design is pretty sick for you’re first go! I think 3D printing gets a bad rep because so much of it is so low quality, but when done right it can be very nice. I have a nouvelle form @keyboardbelle and it is very very nice with a really satisfying kind of deeper sound than most of my other boards. I dunno if they still are on here but maybe they have some insights into 3D printing keyboards, considering how many they’ve done.

This thread is great, I would be very happy to see this as a repository of printable designs

I am eyeing for so long an Saver model designed by Keyboardbelle but with a taller front lip like she did in this album so that I don’t see the switches on the bottom row.

I’ve send her a message at one point but she did not reply … any idea what happened to @keyboardbelle and if she’s coming back ?

I love the look of this, and I think the potential for 3D printing cases is huge. There’s a beautiful Teardrop Art Deco case on Thingiverse (https://www.thingiverse.com/thing:3750721) which I would love to use but print on demand costs seem to be astronomically high.

This maybe just the pictures, but the case looks too smooth for a printed one. How come? Was it sanded after?

No, it’s just printed at a finer layer height than people typically use for 3D printing cases (since it takes so long, it’s not practical to do that if you’re wanting to sell dozens of them). But for a one-off that I’m using myself it doesn’t really matter if it takes a long time

Oh, I see. These edges does look stunning! But I imagine that to make 30 hrs per case commercially viable it would probably have to be about the same price as high end CNC cases.

I’ve emailed @keyboardbelle several times with no reply now. I own 6 of her cases and like them a lot.

I also got no reply to several of my emails…
Hopefully she’s doing well (IIRC she posted about having some issues).
I have her Cadette carbon fiber case and it’s lovely.

In other 3D printing-related news, recently there was a Kickstarter project for some 3D printable artisan keycaps. It only barely got funded, which kind of surprised me, but I suppose the number of people who are both interested in artisans and are able to 3D print them is relatively small. There were 12 designs (4 aliens, 4 demons and 4 zombies). I printed them all on my Longer Orange 30 resin 3D printer and they came out perfectly. It’s kind of amazing, actually. And I think it only cost $2 or $3 to print them all. 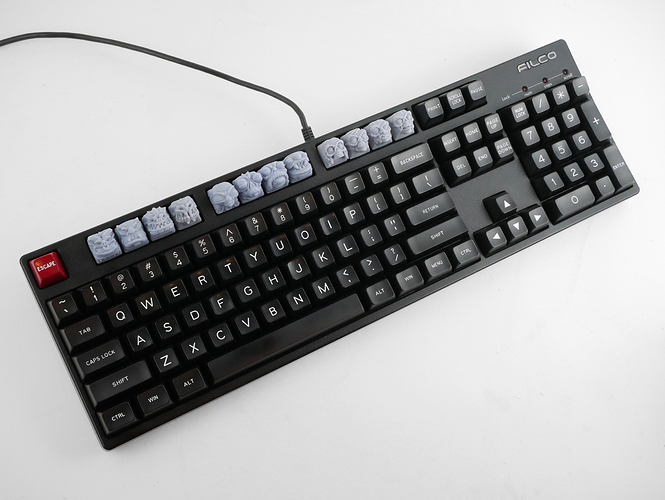 aldavert_artisans24592×3448 1.62 MB
I put them on my Filco Majestouch for now since I don’t really know what I will do with them. I’m considering putting a black paint wash on them to bring out the details, but they look pretty good as they are. Of course fully painting them would look the best, but that would take a long time. 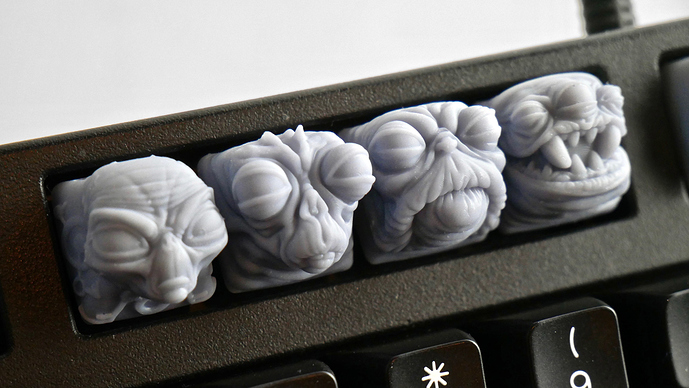 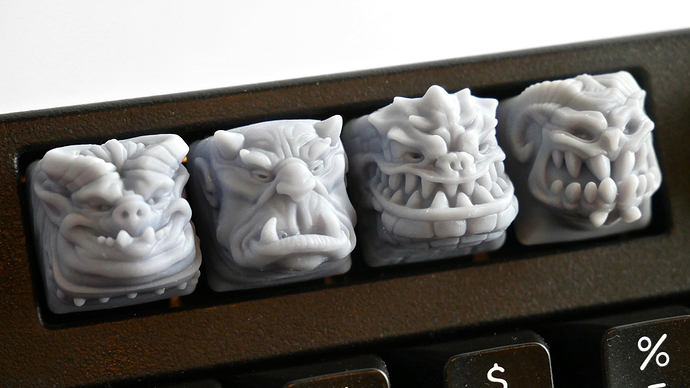 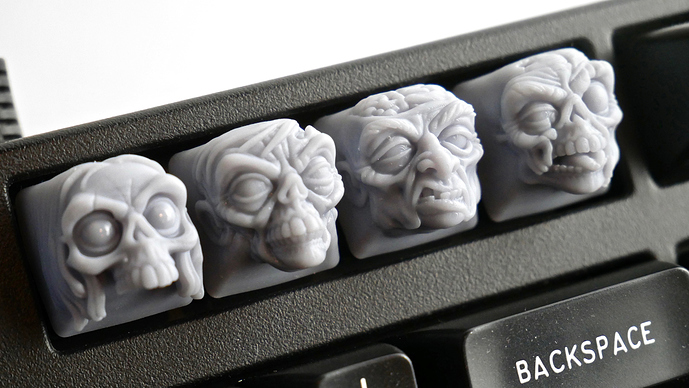 Wow, those artisans are really nice! (and that’s coming from a not-normally-an-artisan-guy). You’re right that it would be neat to see them painted!

I’ve also been trying to find economical ways to print out the Teardrop, but, as you noted, 3d print services are charging exorbitant amounts to do so. Shapeways, for example, is charging between 615.90 USD (for white plastic, the only PLA color available for this print) and 5,464.02 USD (for bronzed silver). With the costs of large volume printers decreasing dramatically–the Artillery Sidewinder, which has a build volume of 300 x 300 x 400 mm, can be purchased for about 400 USD–I am contemplating upgrading my printer so that I can print out the Teardrop (and some of my other larger cases).

I’ve posted some keyboard case models to Thingiverse. Most are standard 60% tray mount cases, but recently I have been attempting variations on the typical tray mount design, e.g., the Bertuccio, Zatarra, and Haydee.

Shapeways would definitely not be a good choice for something large like this. Have you looked into 3D Hubs or other services that individuals use to do printing for hire? Of course with large format printers being so cheap nowadays, you don’t have to print many things to make it worthwhile to just buy one

I tend to print a lot of keyboard cases, so I think upgrading to a new printer makes the most sense. I noticed you are using a Creality CR-10S4. How do you like it so far? I am considering either the Creality or the Sidewinder.

I like the CR-10S4 quite a bit. It’s been my go-to printer for quite a while and I’ve printed a lot of stuff on it without needing much in the way of repairs and maintenance. But I got it close to 3 years ago, so you’d think that there would be better options at this point. I’m not really up to date on FDM printers anymore so I’m not sure what the other options are. I did a review of it on YouTube back in 2017 by the way (and also did reviews of the other CR-10 models that were available back then).

This thread is becoming pure gold.

@RogerArbogast , i like the multiple cases you designed. I would love to see the Busoni Mark II printed as I’m so fond of the F62 design

I love those designs! I dont know the economics of materials, shipping and so on but I wondered if a group buy situation, a choose your design one, might help more people jump in. Enough people could hell generate a profit enough to pay off the printer. I think more people would go for something like this if they could get access to it without having to buy their own printer or use the $1000+ services.

I want to give a shoutout to Jake aka P3D, who is supernice and responsive and has lots of cool designs. Him and @The_Royal ran a group buy for a 40ish kit called Liminal recently, check out my build.