Along the lines of the posts Some ideas about sub-30% layouts involving the Enigma, pain27, Alpha and 30wer and Change My Mind: 40% layouts are insufficient for serious work, I’m wondering what changes to the standard “everything on a layer” might be doable, coming from a larger keyboard workflow.

I’m a bit intrigued by this zlant configuration with numbers on the bottom row flanking the space but I recognize that it sacrifices the raise/lower keys. I wonder if SpaceFN would be an appropriate substitute. My only other quibble with this layout is the lack of dedicated arrows (though again SpaceFN + vi keys could work) and the lack of control/option/command modifiers.

I’ve also considered putting the numbers on the top row and splitting the bottom alphas like this.

Thoughts, from a “here use this, it works for me” practical standpoint, or even a “theoretically, I think X” POV?

Interesting idea. Didn’t think of such a layout for my Zlant. Then again, I mostly have my Zlant, because I initally wanted to see how SA Vilebloom looks on the Zlant and hence I was quite restricted to the default Plank layout.

But there are only a few things I dislike with the Planck layout:

The layout with the number row and (maybe) modifiers just on tap is a creative idea, but looks kinda unintuïtive to me. The »Didn’t have any appropriate keycap sets to put on it, so I’ll make due with xda minila.« sounds as if the keycaps shown do not match the actually used layout.

I like your proposition more, but I’m not (yet) convinced by the 2u spacebar between the V and B keys due to the BNM keys shifted 2u to the right side. (Still waiting for my Alpha keyboard to try out such a layout and get my own opinion on this. Might be able to say more about this in a few weeks.)

Thoughts, from a “here use this, it works for me” practical standpoint […]

What works quite well for me on my MiniVans and in similar way on the Zlant is the following layout without dedicated number row: 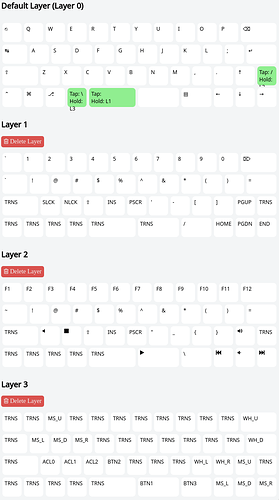 Zlant (not the latest screenshot, Insert, ScrollLock, Pause and friends are missing): 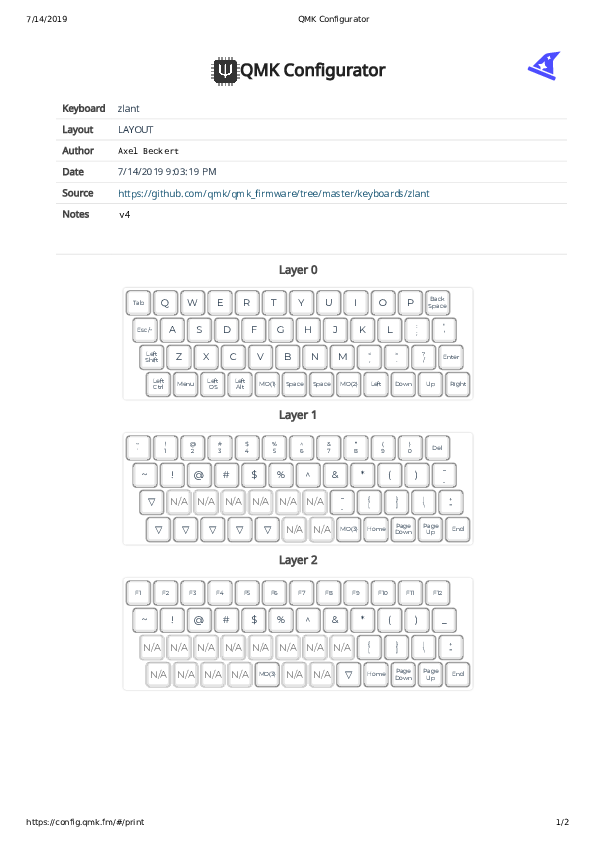 The basic idea are three layers:

Some key assignments decided by mnemonics:

What works very well for me:

While using that layout I though figured that a few things are suboptimal:

Still not sure how to improve it in detail, but surely will need one or two more iterations of tweaking…

It was ok, but I found out that I used special chars for programming more than the numbers. So for now I’m back to numbers om a layer